Accessibility links
Brewskee-Ball Founders Refuse To Be Sidelined By Trademark Case Brewskee-Ball has built a league of competitive Skee-Ball players, but the owners of the name Skee-Ball are not amused. They're suing for trademark infringement, but the league isn't rolling over. 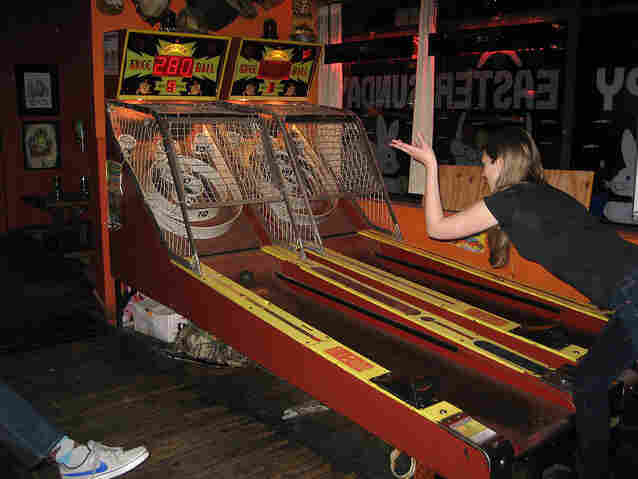 Brewskee-Ball has built a league of competitive Skee-Ball players, but the owners of the name Skee-Ball are not amused. Courtesy of Eric Pavony hide caption 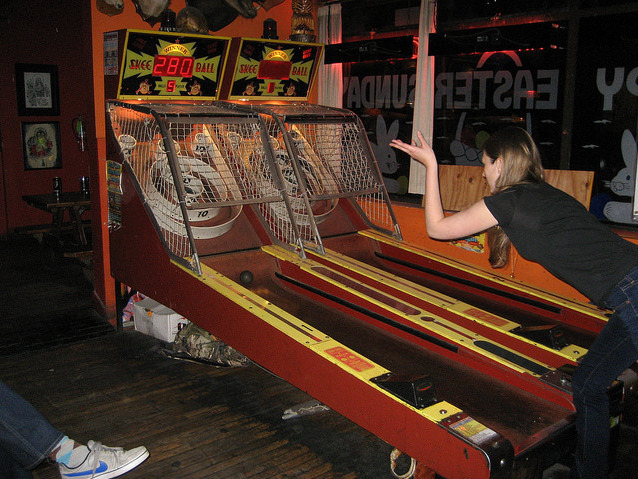 Brewskee-Ball has built a league of competitive Skee-Ball players, but the owners of the name Skee-Ball are not amused.

The founders of Brewskee-Ball like to say they've taken Skee-Ball from the arcade to the bar, turning the old-time amusement park game into a competitive sport with hundreds of dedicated players in a handful of locations across the country, including Brooklyn, N.Y., San Francisco and Austin.

But the company that makes Skee-Ball machines is not amused.

It's suing Brewskee-Ball's founders for trademark infringement. The league isn't rolling over, though, and co-founder Eric Pavony is launching a crowdfunding campaign called "Skee the People" to raise money for his legal defense.

Before launching the league in 2005, Pavony says he met with the CEO of Skee-Ball Inc. outside Philadelphia.

"He gave us his full blessing to start the league and he kind of chuckled when we said, 'Hey, can we call it Brewskee-Ball?' " Pavony says. "He said, 'Yeah, of course.' We shook on it. And we got the good times rolling."

The league uses official Skee-Ball machines. The players fling a series of balls up a lane and into the air, hoping to land them in a series of round plastic rings, but the league had to invent its own scoring system and other rules. Bad puns and drinking are optional but encouraged.

Pavony says he didn't hear from Skee-Ball Inc. again until 2010, when the company's representatives sent an email asking questions after the league got some national press. Then Skee-Ball's lawyer sent a cease-and-desist letter, ordering the league to stop using the name Brewskee-Ball. When that didn't happen, Skee-Ball sued the league for trademark infringement.

"We essentially dedicated ourselves to growing and promoting this game to a whole new demographic and marketplace," Pavony says. "Everyone kind of says, when I tell them about the lawsuit, like, why the hell would Skee-Ball Inc. sue you guys and stop what you're doing?"

Skee-Ball Inc. declined to be interviewed for this story, but trademark lawyers say there are some good reasons why the company would file a lawsuit.

"The law says that if you basically don't protect the trademark, at some point it will become a generic term," says Joseph Dreitler, a trademark lawyer with Dreitler True in Ohio. "It will become free for anybody to use."

Dreitler says history is full of brand names that became generic nouns, including elevator, cellophane and aspirin. The process is so common it even has a name: genericide. It makes sense that Skee-Ball would try to avoid that fate.

Most trademark cases settle out of court. So far, not this one. Dozens of motions have been filed by both sides. Still, nobody has blinked.

Lawyers for Brewskee-Ball argue that the name Skee-Ball — which is more than 100 years old — is already generic.

"There's no other word to describe Skee-Ball other than Skee-Ball," says Kristen McCallion, a lawyer at Fish and Richardson, the firm that's representing Brewskee-Ball.

"I don't know, a ramp-based ring toss game for kids with balls? It's funny, right?" Pavony says. "But it's actually not because it's cost us a ton of money to fight this thing already and we haven't even gone to trial yet."

Pavony won't say how much how much he's spent on legal bills, but he's launching a crowdfunding campaign on the website RocketHub in the hopes of raising $100,000 to help fight Skee-Ball's lawsuit — and keep the good times rolling.