Accessibility links
'Nowhere To Go,' Ugandan LGBT Activist Applies For Asylum In U.S. The Ugandan government passed a law criminalizing homosexuality in February. John Abdallah Wambere, a prominent gay rights organizer, says he could face jail or even death if he returns home. 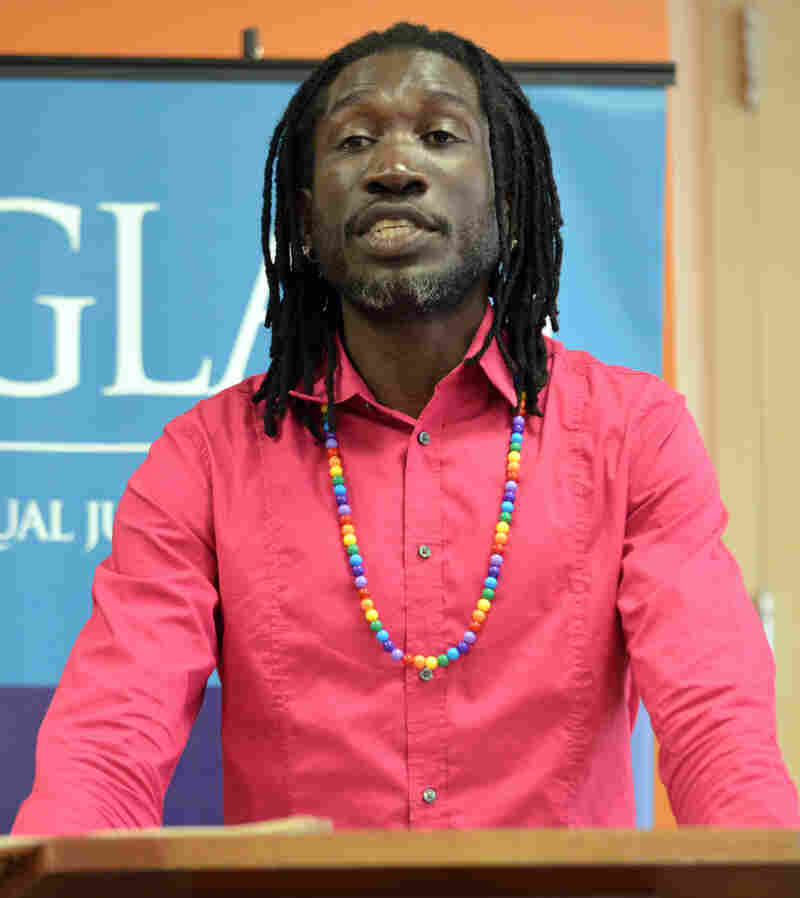 At a news conference in Boston on May 6, Ugandan LGBT activist John Abdallah Wambere says he is seeking asylum in the U.S. Josh Reynolds/AP hide caption 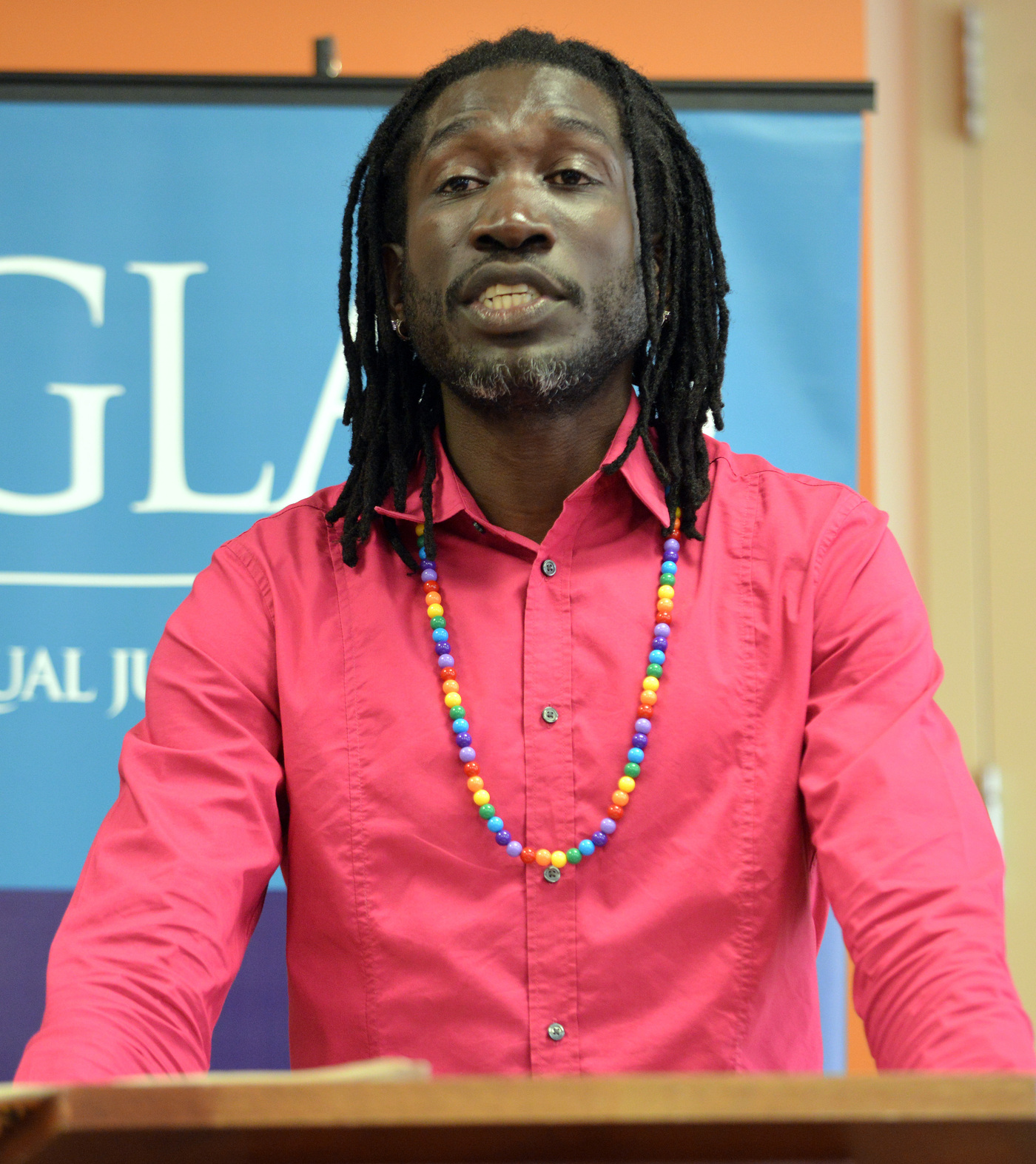 At a news conference in Boston on May 6, Ugandan LGBT activist John Abdallah Wambere says he is seeking asylum in the U.S.

Citing an environment of fear, persecution and anti-gay violence in his home country of Uganda, John Abdallah Wambere has applied for asylum in the United States.

Wambere, 41, came to prominence for his work with Spectrum Uganda Initiatives, an organization that advocates for LGBT rights and provides health and education services.

He announced his decision to seek asylum at a news conference on May 6 in Boston. Wambere is currently living in Cambridge, Mass.

According to an affidavit filed in support of his asylum application, Wambere left Uganda for the U.S. on Feb. 20. At the time, he says, he planned to return home.

Then, on Feb. 24, Ugandan President Yoweri Museveni signed into law the Anti-Homosexuality Act, which criminalizes homosexuality, as well as "aiding and abetting homosexuality," and "promotion of homosexuality."

Violators of the law can face sentences of 14 years in prison for a first-time offense, and up to life in prison for the offense of "aggravated homosexuality."

Gays And Lesbians Seeking Asylum In U.S. May Find A Hard Road

In the wake of the law's signing, Wambere said he feared what returning to Uganda could mean — physical violence, life imprisonment or even death.

Wambere's U.S. visa expired on May 7, but he will be able to remain in the country while awaiting a decision on his asylum application, filed with the assistance of the Gay & Lesbian Advocates & Defenders.

If he's not granted asylum in the U.S., he tells NPR's Arun Rath, "I have nowhere to go. Home is not safe, and it's not even a place I would want to think about."

On deciding to apply for asylum

When I came to the U.S., I didn't have any intention of seeking asylum. I was coming to do my usual work — lobby, advocate and fundraise for my organization, Spectrum Uganda.

And three days later [after my arrival], the bill was signed. This made it very difficult for me to think how, if I went back, I would be at risk, because the [Ugandan] newspapers went ahead and outed me and a couple of my colleagues, giving names and addresses.

And I just imagined what it would mean if I was on [the] ground, being someone who has been so much on the forefront [of gay rights in Uganda].

Through all this, I kept pondering, "What could I do?" And I noticed that I would still be able to support my people back home, while I'm in a much more safe environment.

On the current environment for LGBT Ugandans

It reached an extent where you weren't even guaranteed of your own security, where you wouldn't even trust the next person, because ... people were being compromised by all the anti-gay groups who are trying to spy on you.

The fact that you cannot be able to know what your neighbor is thinking, this has put a lot of people in danger, where police have swung into action, storming people's houses and picking them out of the houses.

There is a lot of blackmail and extortion going on with the police. A couple of people have been undressed in public just to ensure or to prove, "Are you a woman or a man?"

I mean, [there have been] situations where people are being degraded and humiliated, being paraded before the media, and all these hate speeches and all the negative [reporting] that has come out in the [Ugandan] media.

On telling his family about his decision to seek asylum

I haven't discussed this with my immediate family, apart from one. And I told him not to actually reveal it. My [16-year-old] daughter doesn't know that I'm not going back. My nephews, I mean, they write me emails and they are like, "Uncle, when are you coming back?"

And I have to tell them that I still have a couple of things that I am doing. It breaks me, because I'm still holding this from them, because I can't know how they will feel.

Just yesterday, one of my very own friends — actually, my staff at work — broke down and told me that he's so disappointed and ...he's so stressed that I'm not going back.

And I asked him what he felt like. And he's like, "It's so bad. We were just imagining your presence, how strong you have been there for us. A lot of people are going to miss you."

I mean, messages that make you feel broken. But, again, you have to stand firm, cause it is something that is a journey right now.