Accessibility links
For Artistic Criminal, Breaking Rules Is Key To 'Creativity' Performer Philippe Petit, who walked between the World Trade Center towers in 1974, says the difference between the average criminal and an artistic one is that the former takes and the latter gives. 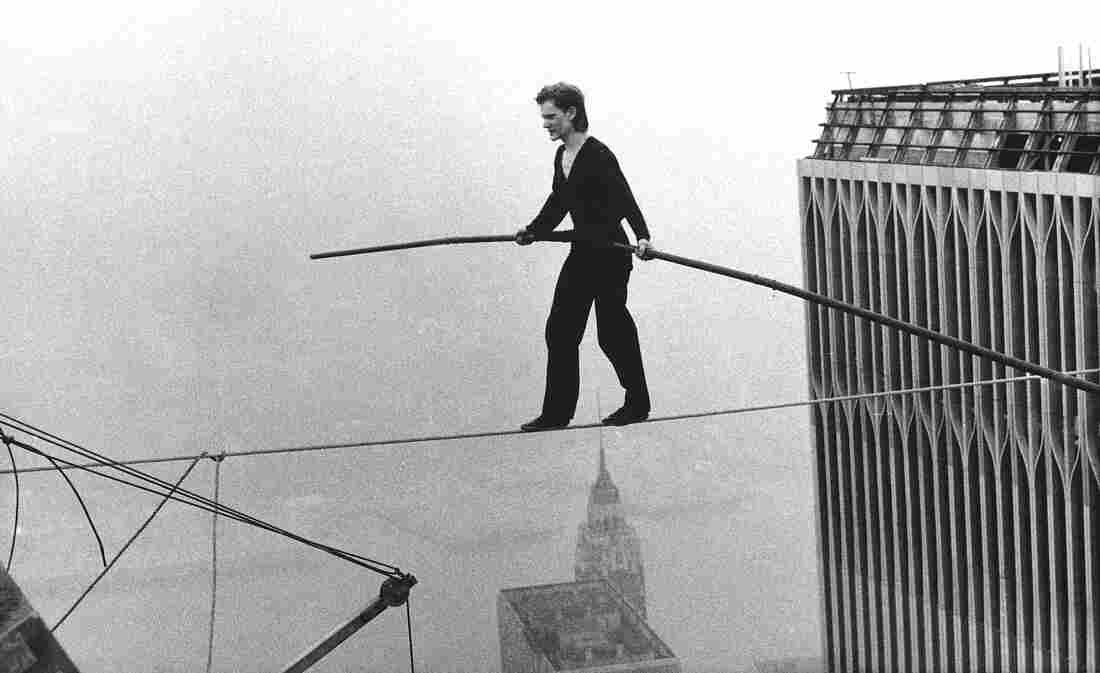 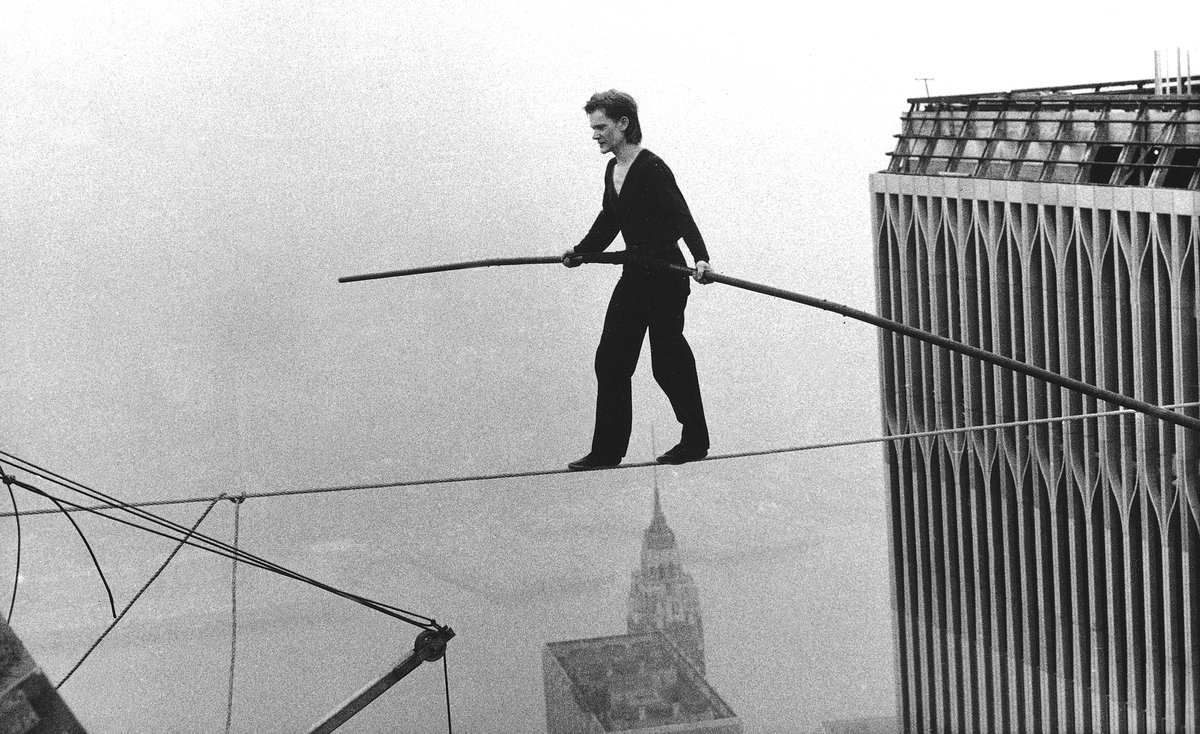 Philippe Petit, a French high-wire artist, walks across a tightrope suspended between the World Trade Center towers in New York on Aug. 7, 1974. 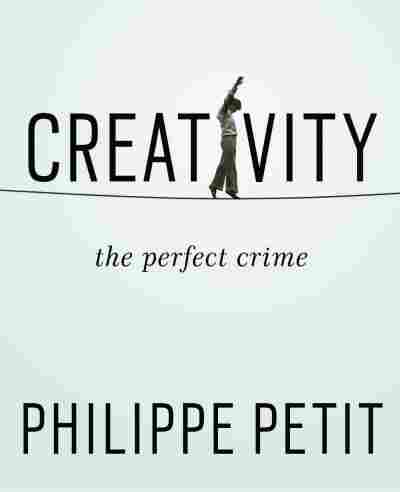 So his new book, Creativity: The Perfect Crime, isn't a compilation of ideas from great philosophers or creators.

The wirewalker, magician, street performer and artist breaks that mold with a book full of sketches and personal dialogue that captures his personal creative process.

And because it's so personal, he says, it will be more useful. "I'm not doing any rules. This is not a thesis on creativity. This is a kind of an outlaw confession," he tells NPR's Arun Rath.

The "Man on Wire" says he has broken rules and made his own path throughout his life — most notably on Aug. 7, 1974, when he walked on a thin cable between the towers of the World Trade Center in New York.

"My journey has always been the balance between chaos and order," he says.

At 64, he continues to perform and push the envelope.

"I have not followed the right path. I have been expelled from five different school when I was a kid. And I learned basically all what I do by myself," says Petit. "So I have something to say that rarely is being said."

On the artist as a criminal

From a early age, I differentiated myself from the other kids because ... I like things well-done. I was trying to orient myself toward perfection. I was very individualist. And then the more I adopted the faces of a criminal — of course, an artistic criminal — the more I felt that the world was against me, that I had to tiptoe, that I had to hide my discoveries. And, of course it's a metaphor, but to me the real creativity, the full creativity has to be rebellious — maybe not unlawful — but outlaws of the laws that we've created.

To be able to create fully, it's maybe fine that you learn the rules, but you have to forget and to rebel against those rules. ... In a bank heist, you steal, you rob, you take away. In an illegal high-wire walk, you bring forth, you inspire, you give a gift — the gift of beauty and inspiration. ... The big difference is, you don't take, you give. 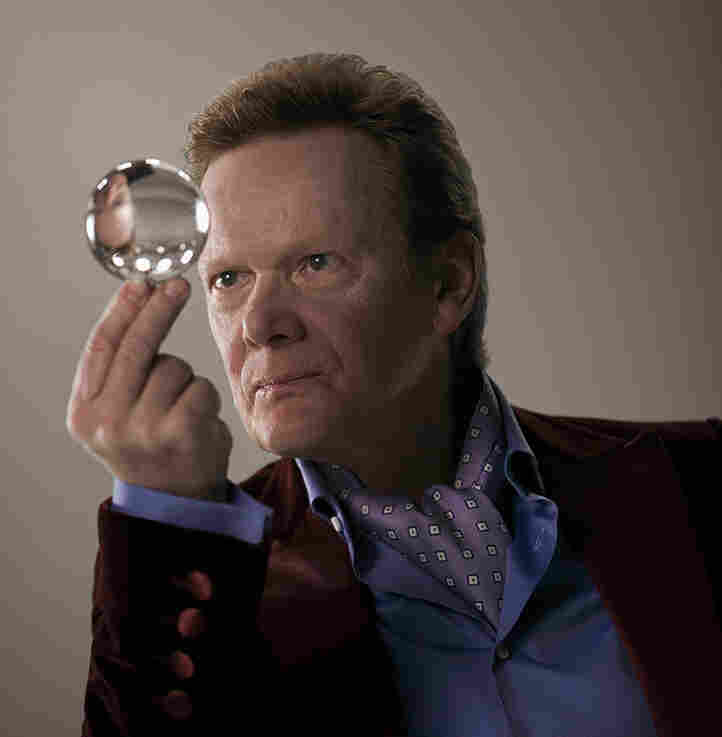 On how his performance process has changed throughout his life

I have been performing in the street for more than 50 years: magic for basically 60 years, and the high wire 45 years. The beauty of it is that it's never the same. It's never easy. And yet, part of my art is to make it look easy.

Since I was not born in the circus, I'm not trying to impress people with a somersaults and tricks and pyramids. So I cultivated — and it took a lifetime — the art of walking. And walking is the hardest thing in the world. It's like breathing, you know — we take it for granted. But we should go to school for breathing and walking. And there is nothing more difficult, but also nothing more easy than walking. So I love that. I love the difficulty of showing how easy it is.

On the value of mistakes

I have discovered the my best teachers were my mistakes, and instead of covering a mistake with a list of excuses, I actually unwrap the mistake and I look at it and approach it, and I see why ... it's my fault, and that's how I'm going to learn. So, I love mistakes.

Read an excerpt of Creativity