Accessibility links
For Two Ozarks Communities, A Stark Contrast In Culture The hilly, rural Ozarks have a history of attracting white supremacists, but the area's strong live-and-let-live ethic has taken a modern turn in an Arkansas town where a large gay community thrives. 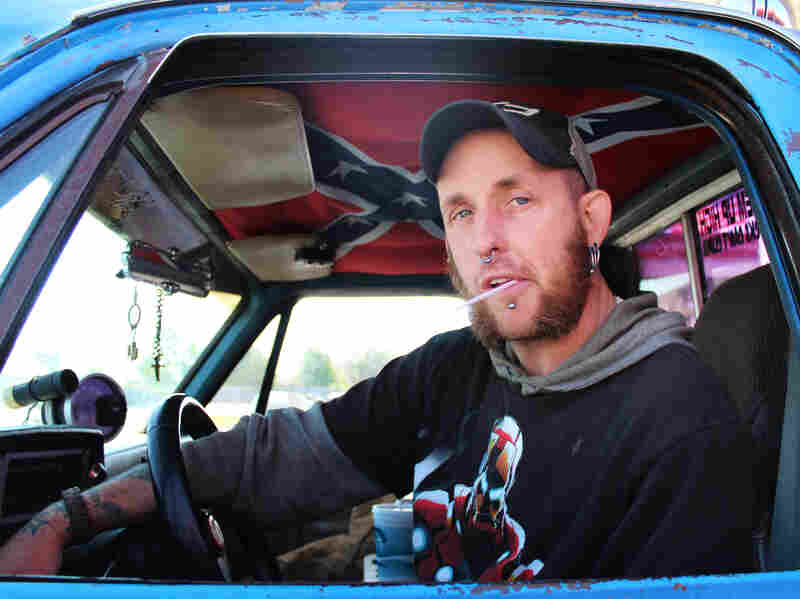 Jason Click is a friend and neighbor of Glenn Miller, who is suspected in three murders last month near Kansas City. Frank Morris/KCUR hide caption 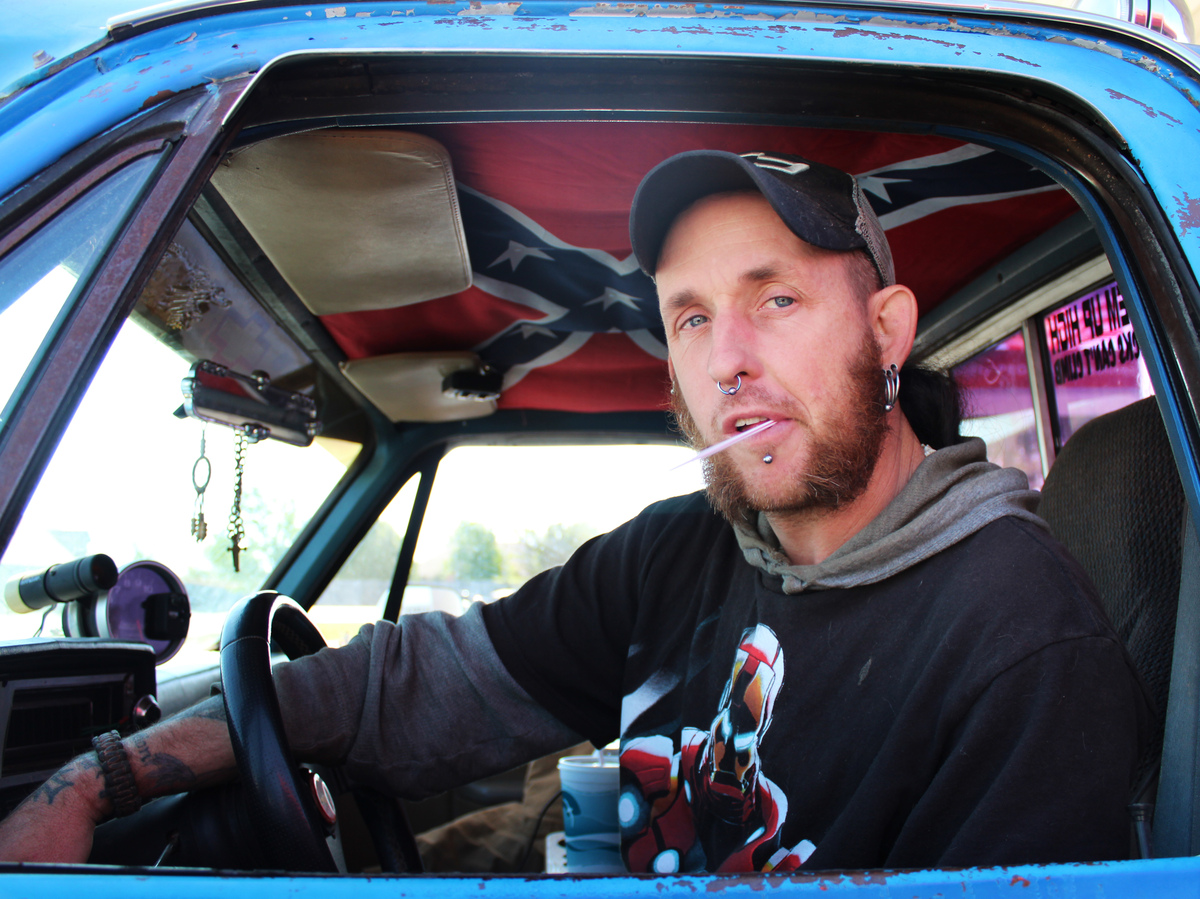 Jason Click is a friend and neighbor of Glenn Miller, who is suspected in three murders last month near Kansas City.

First of a two-part report.

The neo-Nazi charged with killing three people at Jewish centers outside Kansas City last month drove there from his home in the Ozarks, a hilly, rural, largely conservative part of southern Missouri and northern Arkansas with a history of attracting white supremacists.

The Kansas murders sparked a painful discussion in the shooter's community in Marionville, Mo., where bigotry is an especially divisive subject.

"I am not blind to the shortcomings of this area, and I will tell you, as a native, we are still mired in the past," says Nancy Allen, a professor and author in nearby Springfield, Mo.

Allen says most black residents fled Springfield after three black men were lynched on the town square in 1906. That left it a largely white city in a very white region endowed with a fiercely independent and insular culture. Allen calls it the "code of the hills."

Recently, the former mayor of Marionville was pressured to resign days after delivering this sound bite on TV: "Things going on in this country that's destroying us. We've got a false economy, and some of those corporations are run by Jews."

More On Race Relations In The Ozarks

Visiting his town, you can see why he might be looking for someone to blame for its decline. Marionville has lost its university and factories that once employed hundreds. Downtown is boarded up.

The neo-Nazi accused of the shootings in suburban Kansas City — a man known here as Frazier Glenn Miller — bought a house nearby more than 20 years ago and made some friends.

"Yes sir, I knew him, real nice guy. He'd help somebody. He helped me quite a few times. Real nice guy," says Jason Click as he sits behind the wheel of a big old pickup with a rebel flag on the ceiling. He says bigotry — Miller's or the former mayor's — doesn't faze him.

But the former mayor's comments split this friendly town in half. 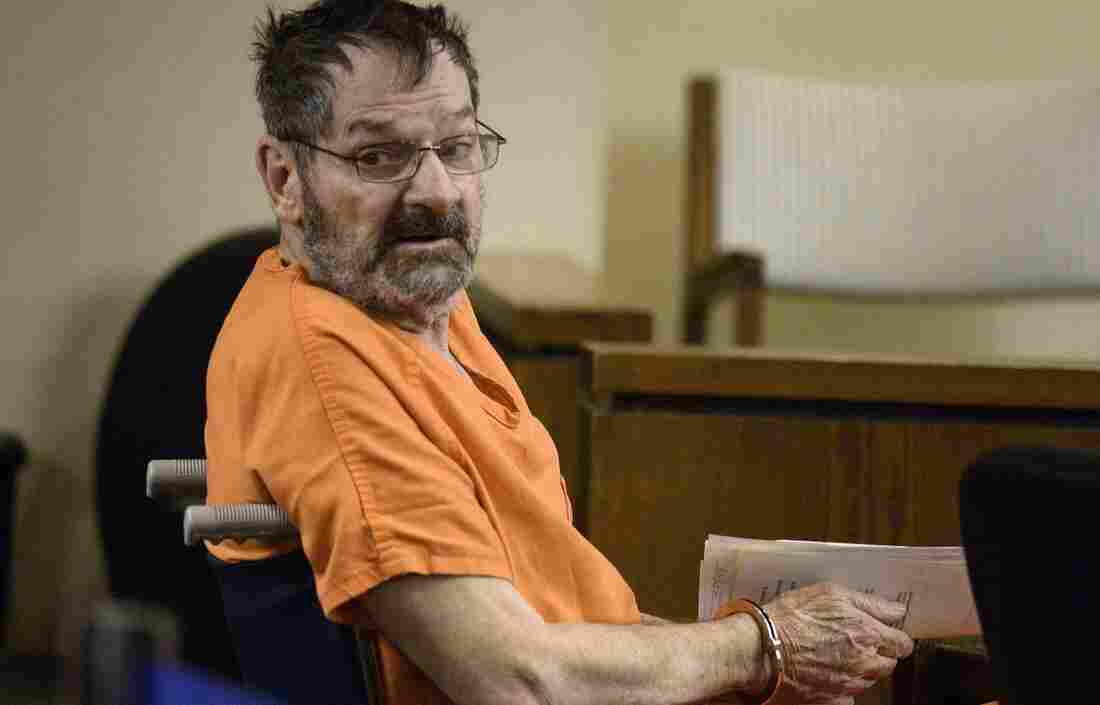 "People don't want to have the brand of being racist, backwards bigots, and when the mayor made his comments, that's exactly what we are portrayed as," says John Horner, who lives with his partner in a prominent house in Marionville.

Horner finds this town very accepting but uncomfortable about addressing its differences over racism. "It's like poking at an open wound. They don't want to talk about the issue because the popular sentiment is if we don't talk about it, it will go away," he says.

And that holds for many here, even at the Hillbilly Gas Mart. Flora Walker knows that some of her longtime customers don't come around anymore because they don't want to be in the same room with those offended by the former mayor's comments.

"I liked and cared about everybody involved. They were all my friends. I care about what happens to them. I don't hate anybody, and it's sad that some of them now hate one another," Walker says.

Just 60 miles south of Marionville, there's a town similar in heritage but culturally on a different planet. One of the most infamous anti-Semites in American history, Gerald L.K. Smith, retired to Eureka Springs, Ark., 50 years ago, erected a gigantic seven-story statue of Jesus and established an outdoor theatrical extravaganza depicting Christ's last days.

"There are rainbow flags outside of a lot of the gay-owned shops. A lot of us are movers and shakers in town," Walsh says.

The town boasts three gay pride weekends annually and a vibrant tourist economy. It's about the same size as Marionville and just about as white, but Walsh says in Eureka Springs, old ways and new culture coexist.

"That statue and the great Passion Play [don't] by any means represent the town. It's just part of the great mosaic in this little town — so it has its place in this community, as do rainbow flags," Walsh says.

Parts of the Ozarks seem to be coming to terms with modern American culture in ways that might shock earlier generations. But it's not happening quickly or evenly or without a fight from people who want to preserve a white homeland where the so-called code of the hills still holds sway.

The second part of this report appeared on All Things Considered on May 12.

The audio version of this story incorrectly reports that no plaque exists to mark the site in Springfield, Mo., where three black men were lynched in 1906. There is, in fact, a plaque. It's 4 inches by 12 inches and was installed in 2002 near a larger historical marker that otherwise omits mention of the lynching.