Accessibility links
Campy, Sweet Love Letters, Straight From The Kitten Basket Christopher Isherwood was in his 40s when he met the teenage Don Bachardy. They spent the next three decades making up a tender storybook world, expressed in a new collection of their love letters. 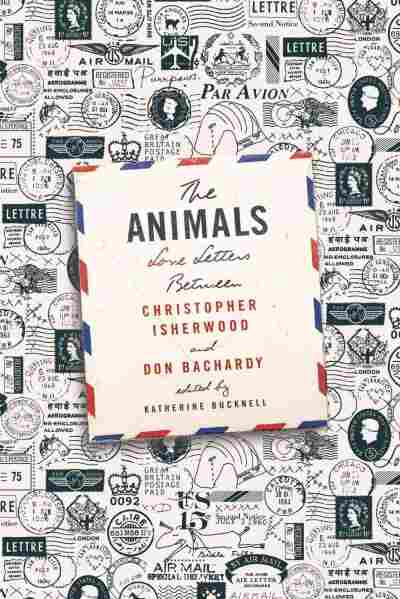 The writer Christopher Isherwood met teenage Don Bachardy on a beach in Southern California when Isherwood was in his late 40s. For the next 30 years, until Isherwood's death in 1986, they were partners, collaborators and creators of a tender storybook world entirely their own.

Their collected love letters, edited by Katherine Bucknell, reveal the private mythology they built up, in which Bachardy was a white kitten, Isherwood an old, beaten-down horse, and their home in Santa Monica a "basket" where horse and kitten lived together in whiskered bliss. Isherwood is "Dobbin," the "Dear Longed-for Colt," "Darling Nag," "Worshipped Plumed Steed," and "Slickmuzzle." Bachardy is the "Only sweet angel Kitten," "Sacred Pinkness," "Sweet Longed-For Flufftail" and "Velvetpaws."

How very much he is missed by his Kitty. He is so loved and thought about by Kitty, every day, all the time. Kitty longs so to lay his head against that long mane and feel that knobby foreleg around him again.

This private world is safe, insular, unbreachable by outsiders — whom they call "The Others." Isherwood writes, "Away from you, I can't talk, I don't feel this is my language or my world. I want to talk Cat-Horse again."

Their pet personas are more than just sentimentality: They're revealing, as disguises tend to be. Isherwood writes, "I often feel that the Animals are far more than just a nursery joke or a cuteness. They exist. They are like Jung's myths. They express a kind of freedom and truth which we otherwise wouldn't have." The Animals are their best selves — Kitty is sweet, gentle and innocent; Dobbin is faithful, sturdy and loyal — and also their worst. Kitten, especially in the early years, is fragile, often helpless. Dobbin is old and getting older. At one point Bachardy writes, perhaps not altogether kindly, "old Dub leads such a glamorous life, and when you think that most horses his age would be standing out in a quiet meadow sleepily munching grass, or on their way to the glue factory."

Sometimes the nursery language feels hollow, an act of maintenance rather than passion, or, as Bucknell puts it in her introduction, "ritual observances to their household gods." But these labored endearments are almost as affecting as the earnest ones — theirs is an enormous love, but it also clearly came with an enormous amount of work and care.

One of the best surprises of the collection is what an excellent writer Bachardy is — wry, sharp and funny. In one letter, he describes the aftermath of an attempted suicide of a friend's father, who left blood splattered on the carpet. Isherwood replies, "Your letter, with the truly horrendous diary excerpt, just arrived. I enjoyed it so much I quite forgot to feel sorry for anybody. Honestly, this is literature! The things you put in! Like Marguerite saying, 'She'll never get it out of the carpet!' "

Igor Stravinsky, Henry Miller ("an absolute sweetie pie"), Vanessa Redgrave ("pod-born"), Tennessee Williams, and, of course, W.H. Auden, one of Isherwood's closest friends and collaborators, all make appearances. But one of the nicest things about the letters is the way Bachardy and Isherwood pay the same gentle attentions to their cleaning lady as to the various distinguished actors and writers in their orbit.

Ultimately, though, the letters are private, not meant to be read by other people ("I really don't think the Animals' language is intelligible to humans!" Isherwood writes at one point). We don't have a right to criticize them as we would a novel. These are tender, sweet, campy love letters we are given the privilege of reading, if we so choose.

Read an excerpt of The Animals