Accessibility links
Kitchen Window: Home Is Where You Hang Your Apron Whether it's across town or across the ocean, moving is unsettling. But re-creating a meaningful meal — one that connects us to childhood, traditions or travels — can make us feel at home anywhere.

Home Is Where You Hang Your Apron

Home Is Where You Hang Your Apron 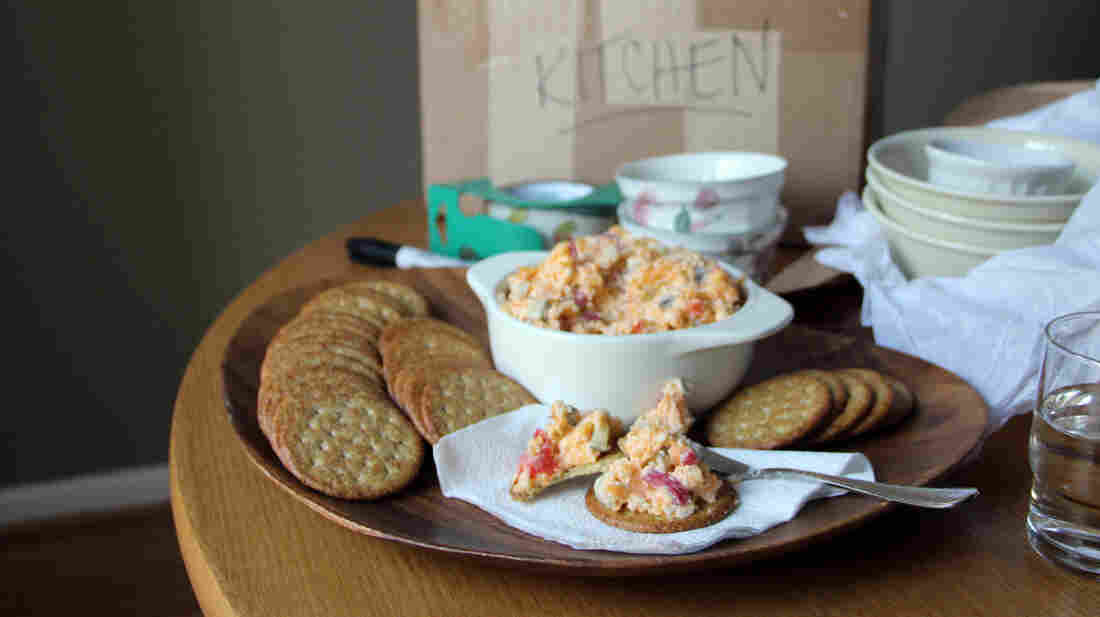 A cheese-and-cracker snack is sustenance during the hard work of packing up the kitchen. And after you've moved, a meaningful meal can help make your new place feel like home. Amy Morgan/NPR hide caption 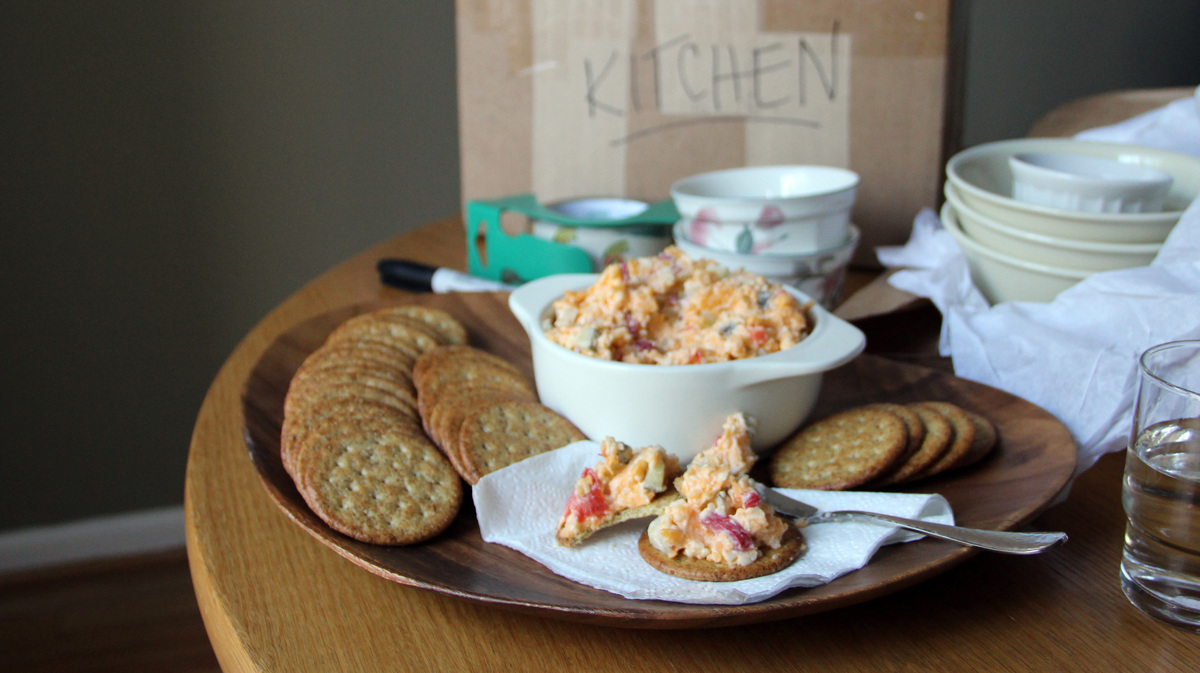 A cheese-and-cracker snack is sustenance during the hard work of packing up the kitchen. And after you've moved, a meaningful meal can help make your new place feel like home.

For almost 10 years, Kitchen Window has been providing a weekly peek into the kitchens of writers, chefs and food fans from all over. I've helped produce this series for half of its life, led by its editor and Weekend Edition commentator Bonny Wolf. Today, we're shutting the window — at least a little. As the saying goes, you'll find other windows opening where one is closing (or something like that), and, indeed, NPR's food coverage continues both on-air and online. Much of it finds a home on our blog, The Salt. But we'll no longer publish new Kitchen Window stories here weekly.

I'll miss working in this virtual kitchen, but I'm undergoing a big change in my actual kitchen, too: I'm moving to a new house in the next month. And all this change has me thinking about a theme I've noticed in the stories we've shared through Kitchen Window: the idea that food is a powerful thread in our ties to home.

As part of an Army family, I've moved every few years my whole life, so I don't usually get attached to a house. It's just a temporary vessel, right? But I will miss the house my husband and I are moving out of now — especially the kitchen.

It's the biggest room and the busiest. We've spent ever more time there since buying a comfy old dining set from a Danish fellow in preparation for our growing family. It's a place of discovery for our now 11-month-old Ellinor, as she paws at the morsels we place on the honey-colored tabletop. And it's a place of wonder for us, as we watch her.

... the meals that are meaningful, we take with us wherever we go — so that wherever we re-create them, that's 'home.'

More than any other place I've ever lived, this house has the kitchen at its heart — and my heart in it! I didn't know I'd grown attached until we were signing the sale contract a couple of months ago, sitting around that very table. It dawned on me, and my eyes widened: I'm going to miss this place.

As I think back on all the meals we've shared in this kitchen, it strikes me how often they were inspired by the Kitchen Window stories I was working on. I'd be at the grocery store wondering what to make for dinner or a special occasion, and I'd recall a recipe that had sounded sooo good. I'd find it online on my phone, buy the ingredients and then go home and try it. I'm sharing some of those recipes today. And the whole archive of stories, of course, will always be available online.

Now that I'm packing for my own move, I'm reminded of one I helped with a few years back. My friend Krista was moving overseas, and I couldn't believe how much stuff she was planning to take with her — including several large cookbooks. I kept trying to cull her belongings. "You're moving to Spain," I reasoned. "Imagine the foods you'll eat! Are you really going to need these American recipes?"

But as she prepared to uproot herself, she felt that she did need them. And I've come to realize why: Because the meals that are meaningful — ones that connect us to our childhoods, our traditions, our travels — we take with us wherever we go. So that wherever we re-create them, that's "home." For anyone, anywhere.

It's where you hang your heart — and your apron.

Amy Morgan is an editor for Digital News at NPR. 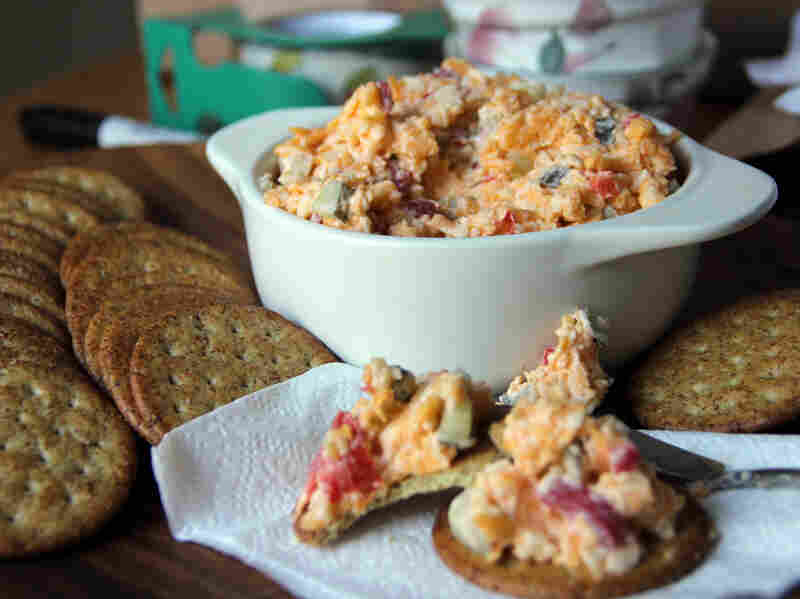 My "rustic" version (no food processor) needed an extra heaping tablespoon of mayonnaise, and I let the flavors meld overnight before serving. The recipe yielded about 4 cups. Amy Morgan/NPR hide caption 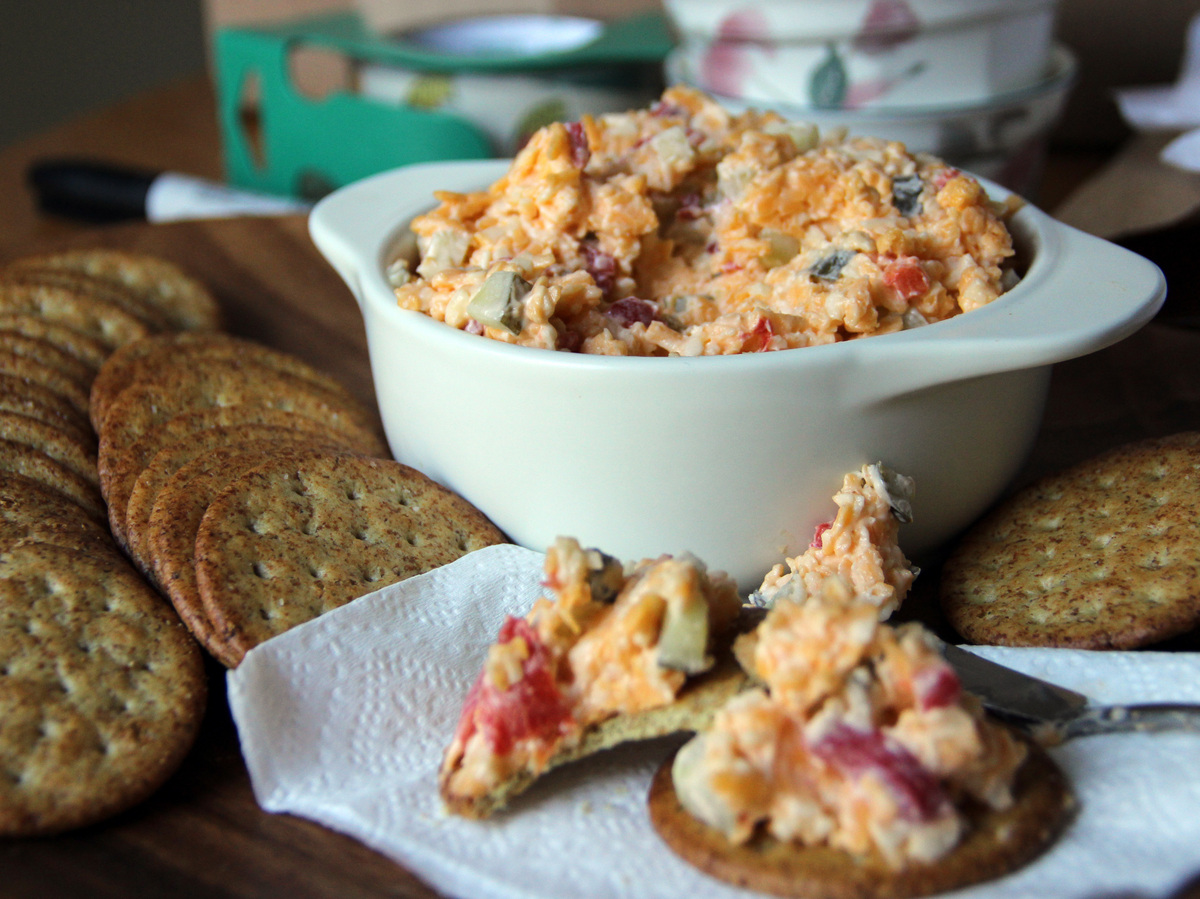 My "rustic" version (no food processor) needed an extra heaping tablespoon of mayonnaise, and I let the flavors meld overnight before serving. The recipe yielded about 4 cups.

My colleague Wright and I both lived in Augusta, Ga., and share an affinity for Southern food — and high standards for pimento cheese. His family recipe does it right (as opposed to the neon store-bought stuff). I used a lot of garlic when I made this for a Southern-themed book club meeting, and it was a big hit next to the fried chicken. I like it best on sturdy wheat crackers.

1 4-ounce jar of pimentos (or pimientos, as they are also called), drained

Cut all ingredients except the pimentos into large chunks. (The pimentos are already chopped.) Place all ingredients in a food processor and pulse just long enough to roughly chop. You don't want to puree the ingredients, just make them pliable for the next step.

Put in large bowl and mix with about 3 good tablespoons of mayonnaise. (Wright's recommendation of Duke's mayo is a good one.)

Refrigerate, but set out for 20 to 30 minutes before use.

When she wrote for Kitchen Window about peanut butter, Nicole was living on the West Coast, which I called home for years. So her fresh, simple, often vegetarian or vegan approach resonated. This recipe is so delicious, even my tofu-eschewing husband eats it. The satay-like sauce also goes great with chicken, which I sometimes serve alongside the tofu. Nicole recently moved to Morocco and is now blogging from there.

Lightly oil an ovenproof baking dish and arrange the tofu so that the slices lie flat. Brush on the marinade with a pastry brush, and let it soak in for about 15 minutes.

Place the dish in the oven and bake for 30 minutes, until the marinade is caramelized and the tofu is cooked through.

I like to serve this on a bed of spinach (wilted in a sautee pan or in the microwave, with a pinch of salt and a splash of lemon or lime juice). 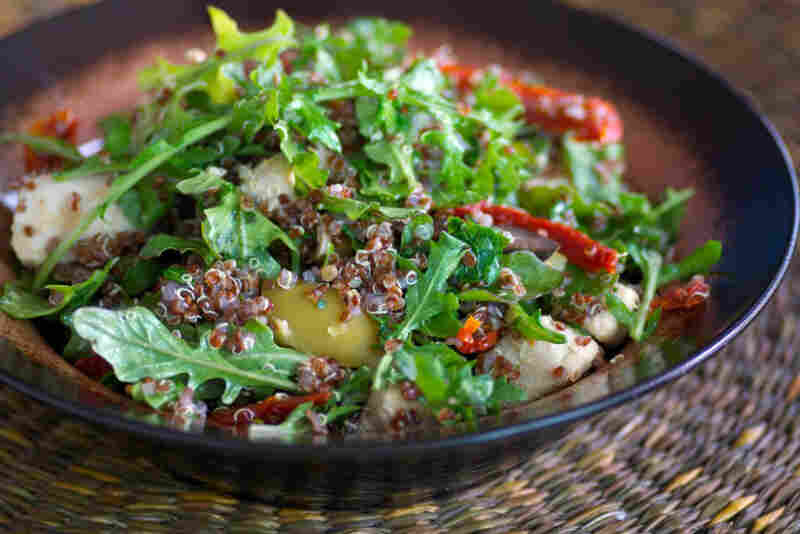 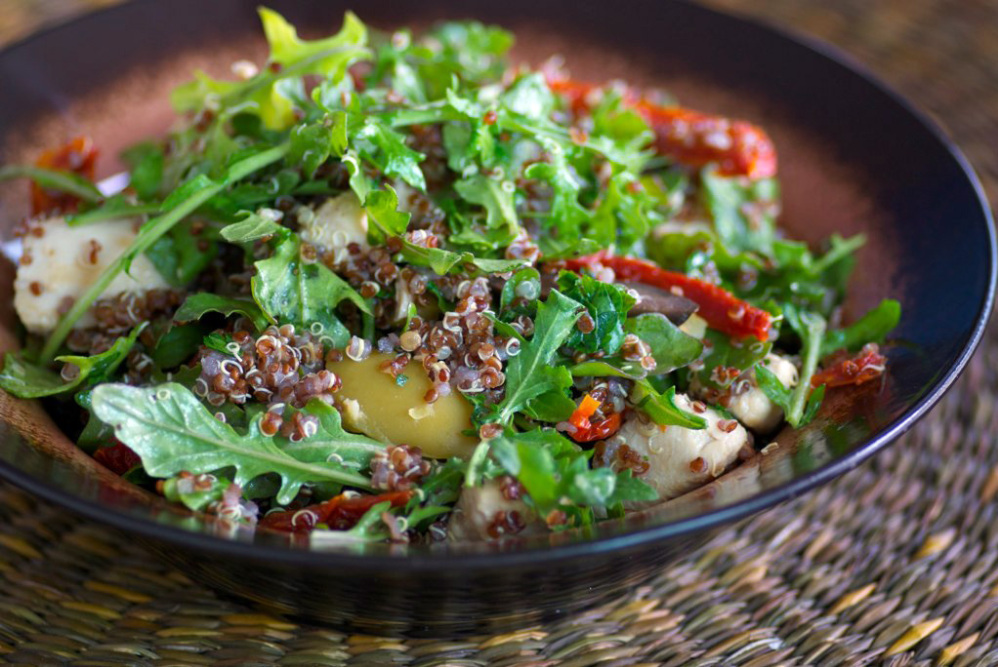 Arugula is something I didn't eat a lot of until I visited Australia, where I saw it (aka "rocket") on menus everywhere. Now it's my green of choice, and not just because it reminds me of our travels Down Under. Susan's arugula pizza recipe is a near facsimile of a pie I had in Sydney. But it's this salad that's become a make-ahead, pack-lunch staple in my house (it lasts in the fridge for several days without getting wilty).

Zest and juice of 1 lemon

To make the dressing, whisk all ingredients in a small bowl and set aside.

In a large saute pan over medium-high heat, warm olive oil. Add chicken and cook 8 to 10 minutes, or until lightly browned all over. Remove from heat. 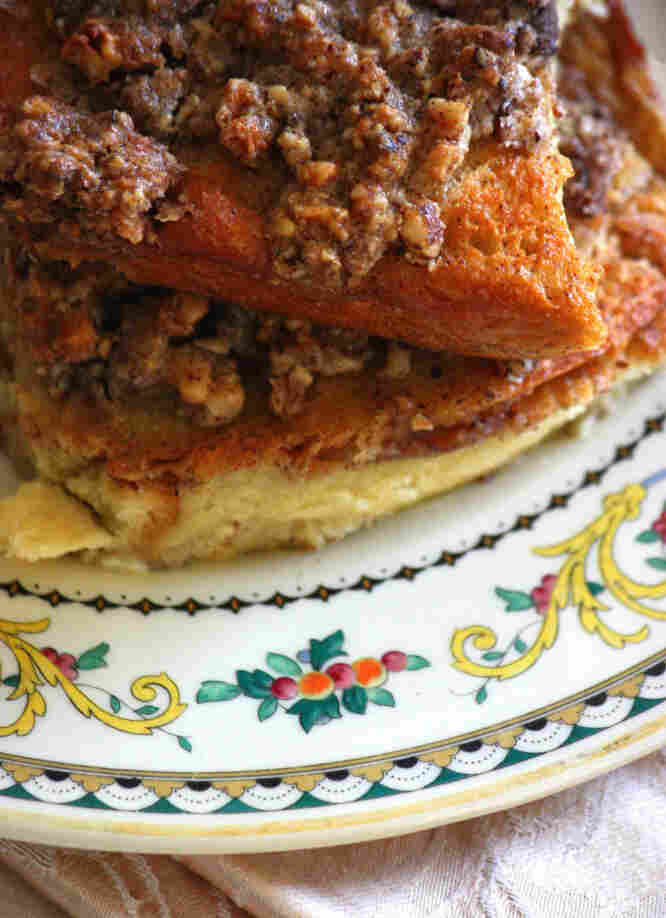 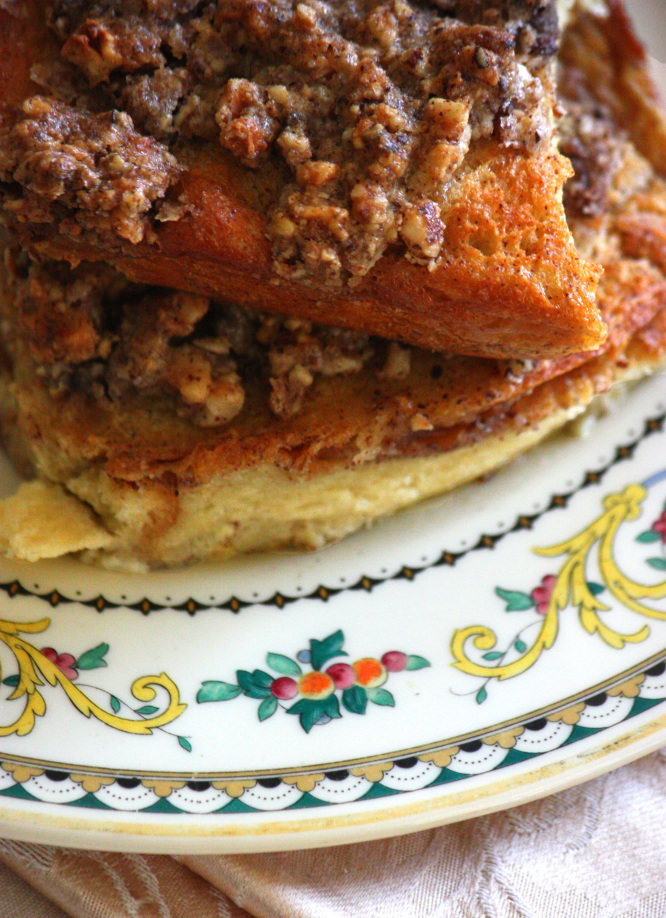 This is no ordinary French toast; it's a knock-your-socks-off, love-in-a-casserole-dish treat. And it's so easy! It reminds me of my mom and dad, as well as close friends in town and old friends from afar — all of whom I've made it for. You don't have to use challah; I was puzzling over what to do with leftover hamburger buns when I remembered this recipe months after Susie wrote about it. Use any kind of bread and any kind of nuts — it's like magic, I swear.

For The French Toast

8 slices of challah or brioche, 3/4-inch thick (or enough to snugly fill a standard 9-by-13-inch dish)

1 cup whole hazelnuts (shelled but no need to skin them)

Set the slices of bread snugly in a 9-by-13-inch glass baking dish. Beat or blend together the eggs, milk, brown sugar, vanilla, cinnamon and salt.

Pour the liquid mixture over the bread and let it soak for about 15 minutes. Then flip the bread over so the other side can soak. Press a sheet of wax paper right against the damp bread and slide the whole thing into the fridge.

For the topping, in a food processor pulse the hazelnuts and sugar until the hazelnuts are little bigger than rice grains. Add the butter and cream and pulse until you have a gritty, cohesive mixture. Scrape this mixture into a bowl, cover with plastic wrap, and store in the fridge.

Preheat the oven to 350 degrees. Take the soaked French toast out of the fridge and discard the wax paper. Strew the topping all over it and bake in the oven for 40 to 45 minutes. When the liquid has been completely absorbed and the bread is puffed and golden, it's done. Serve immediately with as much maple syrup as you like.