Accessibility links
'Godzilla' Brings The Spectacle Without Obscuring The Big Guy's Dark Past Ian Buckwalter says that Gareth Edwards' Godzilla is a summer tentpole with some thought behind it — it's still a giant monster stomping around, but one with the capacity for a sigh of his own. 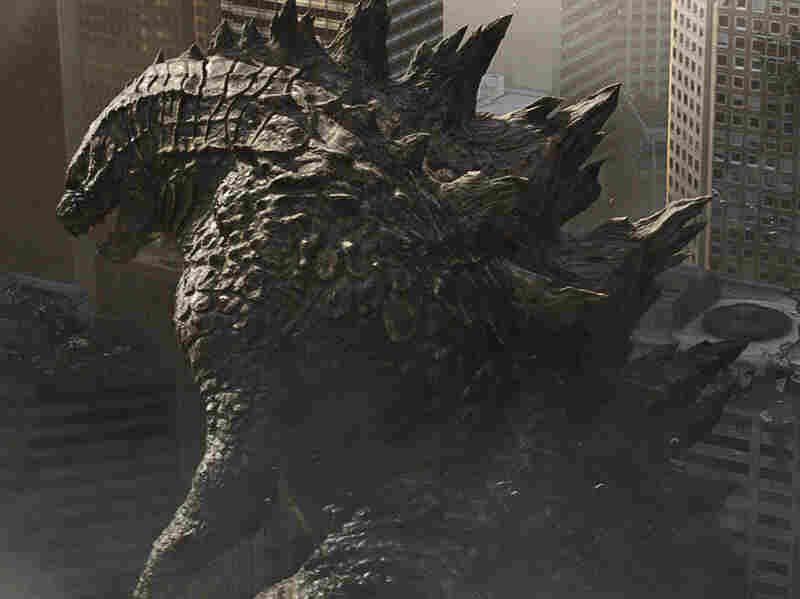 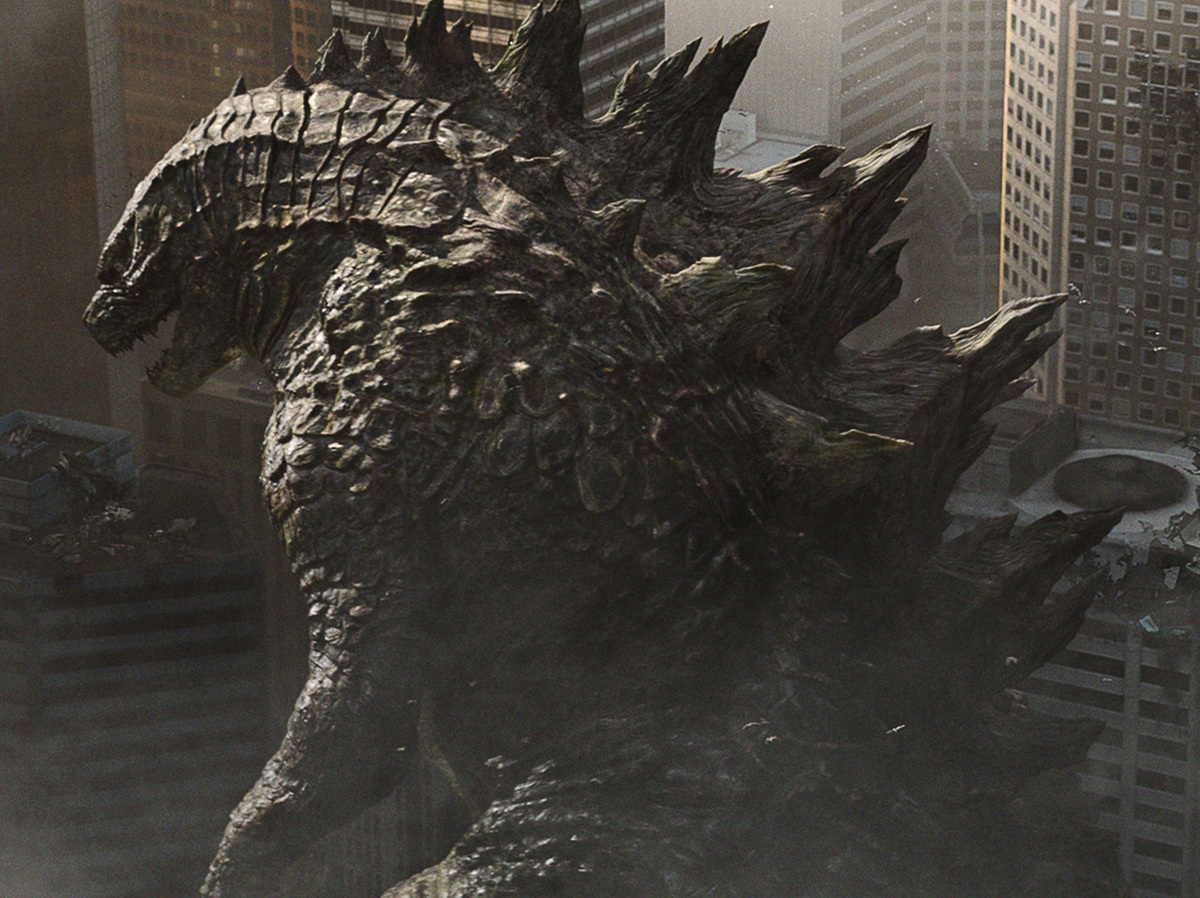 Godzilla. You know, from Godzilla.

This is a monster sold on a sigh. For all of the bombast, the buildings falling, and the brawling beasties, the moment when this Godzilla is most impressive, the moment he suddenly transcends his digital underpinnings and feels like a real presence, is one of his subtlest and quietest. During a lull in a battle among the skyscrapers of downtown San Francisco, the danger around him briefly subsides; his head droops momentarily, his body heaves ever so slightly downward, and he exhales quietly. The fearsome jaws, knifelike talons, and spiky plates on his back might scream world-destroying lizard god, but that sigh just murmurs, "I'm gonna need a minute here."

Godzilla is nearing retirement age, with nearly three dozen movies under his scaly belt, so as the franchise enters its seventh decade, it's fair to ask any director attempting to resurrect the series whether there's a good reason (apart from box-office grosses) to poke this particular sleeping giant. British director Gareth Edwards' answer to that seems to be that it's time for a return to the creature's sober, serious roots after decades of rubber suits and silly monster-on-monster action.

To that end, Edwards demonstrates a clear understanding of what made 1954's Godzilla such an enduring story. As was the case there, he's attempted to create an allegory about the dangers of militarized science, and one that foregrounds the human drama while the monstrous chaos unleashed by man's dabbling in nuclear power and weaponry goes down in the background. He centers the story on one family, the Brodys, whose fates are intertwined with a Japanese nuclear disaster and its subsequent fallout.

Bryan Cranston plays Joe, an engineer at the Janjira nuclear power plant, which early in the film is destroyed in a series of earthquakes mirroring the real-life Fukushima disaster. His wife dies in the accident, and he becomes a wild-eyed conspiracy theorist, trying desperately to prove that the official explanation for the disaster is a smoke screen. Fifteen years later, he's an embarrassment to his son Ford (Aaron Taylor-Johnson), a military ordnance expert now with a family of his own in San Francisco. Ford has to head to Japan to retrieve Dad after a run-in with local authorities, and his visit just happens to coincide with the earth starting its familiar rumbling again. Turns out Joe's theories aren't so crazy after all, particularly to Dr. Serizawa (Ken Watanabe), a secret government scientist studying a mysterious phenomenon at the Janjira site.

The characters don't quite escape the thinly drawn traditions of the standard summer blockbuster, but they are full enough to provide adequate personal stakes, especially with Ford's desperate attempts to reunite with his wife (Elizabeth Olsen) and son amid the carnage. Similarly, the allegorical underpinnings never quite match the grace with which the 1954 Godzilla interrogates scientific ethics in a militarized age, but they're present enough to provoke at least a little thought.

What Edwards is really after here is balance, not just of character and meaningful story, but also of spectacle. This is still a big summer tentpole, after all, and Edwards is committed to making a popcorn flick that thrills without sacrificing brain cells.

Edwards' only previous feature was the 2010 indie Monsters, which impressed its small audience with how effective a monster movie could be even if it barely had the budget to really show the monsters. Godzilla has the budget, but it maintains commitment to the notion that the unseen is more impressive than the seen: Godzilla doesn't appear until over halfway into the film (after one nicely executed bait-and-switch), and really doesn't take center stage until the very end.

When we do see him and the movie's other creatures — because this does still share some DNA with the later monster-vs.-monster iterations of Godzilla — it's most often from specific human points of view. They're partially obscured by goggles, by blurred binoculars, by smoke, by foregrounded buildings. Everything Edwards does visually creates a sense of scale as compared with humans, and when he does open Godzilla up to wide shots, it makes him all the more impressive.

Edwards' willingness to not always go over the top, to not try to be bigger than Godzilla, is what drives restrained moments like that labored sigh, or the stunningly executed paratrooper sequence teased in the poster, with troops falling from the sky trailing red smoke while the eerie Ligeti Requiem made famous by Kubrick's 2001 winds up the tension in preparation for another release.

This is exactly what big summer movies ought to aspire to: never short on dazzle, but unafraid to let us catch our breath once it's been taken away.

We originally listed the character played by Ken Watanabe as Dr. Ichikawa. His name is Dr. Serizawa. The monster's name is still Godzilla.