Accessibility links
Former Ambassador To Russia: Putin Has No Master Plan For Ukraine Michael McFaul, ambassador to Russia from January 2012 to February 2014, says, "I've never seen [Putin] devote a speech to the necessity of reuniting Crimea with Russia. That came only recently." 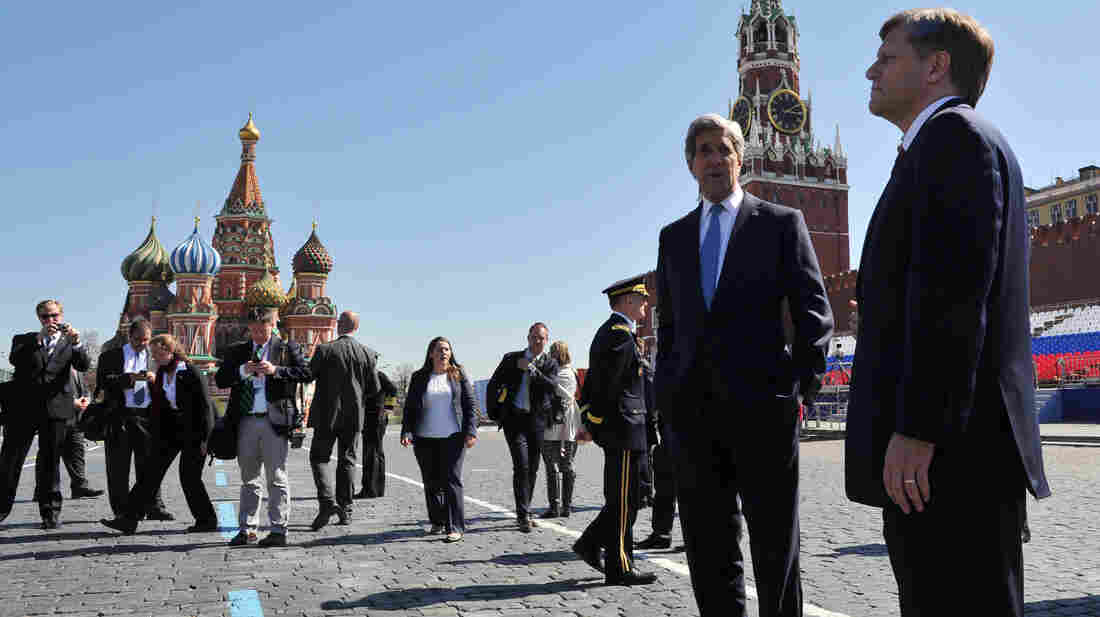 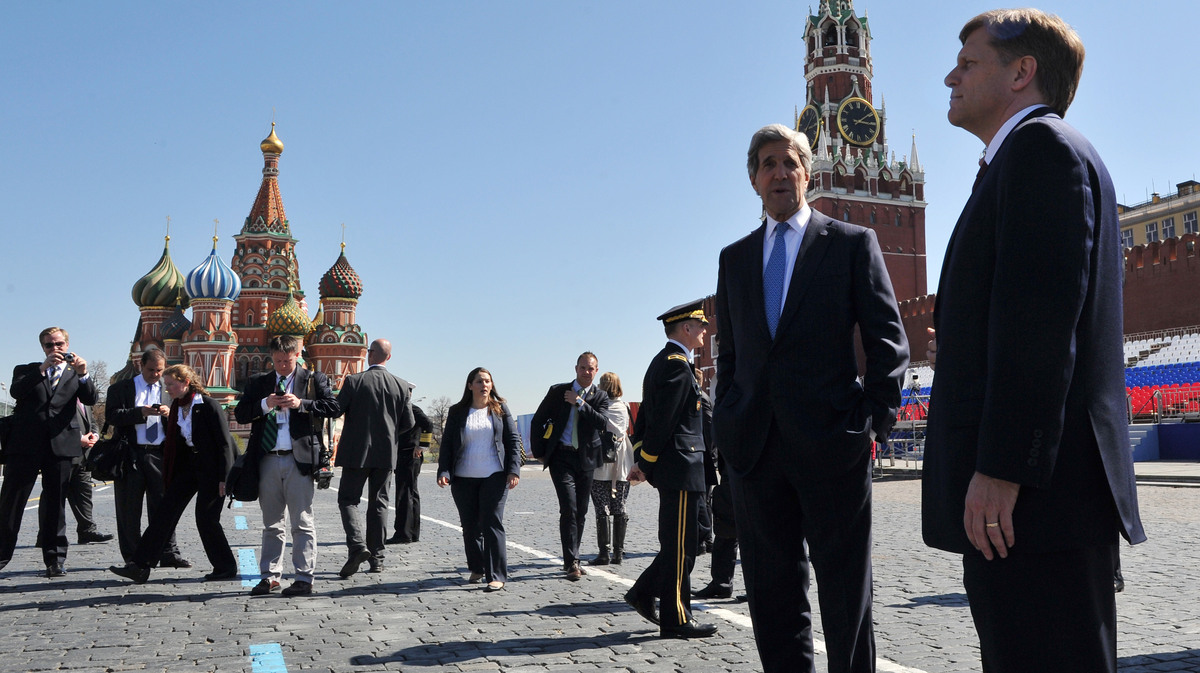 U.S. Secretary of State John Kerry, second right, speaks with U.S. Ambassador to Russia Michael McFaul during a walk in Moscow's Red Square in May 2013.

When Russian President Vladimir Putin started vilifying the U.S., and state-controlled media took his cue, Michael McFaul was portrayed as one of the American villains. McFaul was the American ambassador to Russia from January 2012 to February of this year. He planned to leave just after the Sochi Olympics, which ended up coinciding with the Ukrainian Parliament voting to remove President Viktor Yanukovych from office, leading to Russia's annexation of Crimea.

McFaul is a Russian scholar who has returned to his teaching job at Stanford University. He was the architect of the Obama strategy known as "Reset," which meant moving beyond Cold War hostilities and finding areas for mutual cooperation, such as enforcing sanctions against Iran and bringing Russia into the World Trade Organization.

McFaul served as a foreign policy adviser during Obama's first term. He joins Fresh Air's Terry Gross to discuss the crisis in Ukraine, Putin's increasingly authoritarian regime and his experiences as ambassador.

On the moment America's "Reset" with Russia ended

Beginning soon after the parliamentary elections in Russia in 2011, which were falsified like most elections in Russia have been over the last several elections, but this time through new technology and new monitors. That fraud was exposed and that helped to spark massive demonstrations in Russia, mostly in the capitol in Moscow and other big cities. But we're talking about tens of thousands and, every now and then, hundreds of thousands of people were protesting against the regime.

The 'Pussy Riot' Arrests, And The Crackdown That Followed

Putin responded to that by, first and foremost, cracking down on political opposition and civil society. But as part of that, he needed us to be an enemy; he needed the United States to be an enemy again, to rally his electoral base and to accuse these demonstrators of being our puppets, acting on our behalf. After that moment we tried various things. We kept trying to work with Putin and his government. But I would say after that — that was the beginning of the end, if you will; the end being punctuated, of course, by his decisions to annex and invade Crimea.

Somebody had to lead the country after Yanukovych fled, and so the elected parliament ... elected a temporary government. In Russia they're described as an illegitimate government dominated by Nazis. Nazis and NATO. The two enemies from Soviet history have been resurrected as the two principle protagonists in this conflict. And literally the word "Nazi" is used every five minutes to describe anybody in Ukraine that doesn't support the Russian point of view. ... It's part of the continuation of the enemy, you know, Russia being surrounded by NATO and Nazis. This was a theme in Soviet times. I was a student in the Soviet Union, I remember it.

On what Putin wants from Ukraine

First of all, I don't know. Second, I don't believe anybody who will tell you that they do know. My best guess is that he himself doesn't know, and let me explain that: I think that this was not some master plan that Putin's been plotting for decades — annex Crimea and go in to take Novorossiya. In fact, I've been digging through old Putin speeches. I've never seen him devote a speech to the necessity of reuniting Crimea with Russia. That came only recently.

This phrase "Novorossiya," New Russia, which is [used] to describe these eastern Ukrainian regions — I think he used that for the first time just a couple of weeks ago. So that actually gives me hope, because that means it's not some grand plan, master design that he feels he is now empowered to execute, but that this is more contingent. He's making it up as he goes, and he's calculating about the cost of direct military intervention and then occupation in Ukraine. And Putin is a smart person. He's not doing it a vacuum, and he, I think and I hope, he knows how costly that would be.

On what it was like to be the U.S. ambassador in Russia when the new anti-gay laws were passed

It was in the context of a broader theme of my tenure in Moscow, which is how to respond to a regime that is becoming more autocratic while you're living in that regime and representing the United States of America. And I chose to be vocal. I chose to support LGBT activists. I consciously would host them at my house. I hosted LGBT athletes when we would have events for visiting American athletes. And of course I was a member of the presidential delegations to the Sochi Olympics both [in] the opening and closing ceremonies, where the composition of our delegations made very clear our stance on these sets of issues.

That was not easy to do as ambassador. I'll tell you, there were not always people that thought that it was the right thing to do within our government, because we had these other issues, remember? And this is always the tension about promoting and advocating for universal values versus doing a deal on Iran or chemical weapons removal in Syria. There's always a tension there. But it was my view that if we didn't, who would? And if we didn't lead — we, the United States — on these issues, that would make it a lot harder for other governments to come out as publicly as we did. So I'm very proud of what we did.