Accessibility links
150 Years Old, Arlington Cemetery Is Running Out Of Room Arlington National Cemetery is 150 years old this week, but the historic land is constantly running out of plots. Plans to expand can only delay the time when the cemetery will be full.

150 Years Old, Arlington Cemetery Is Running Out Of Room

150 Years Old, Arlington Cemetery Is Running Out Of Room 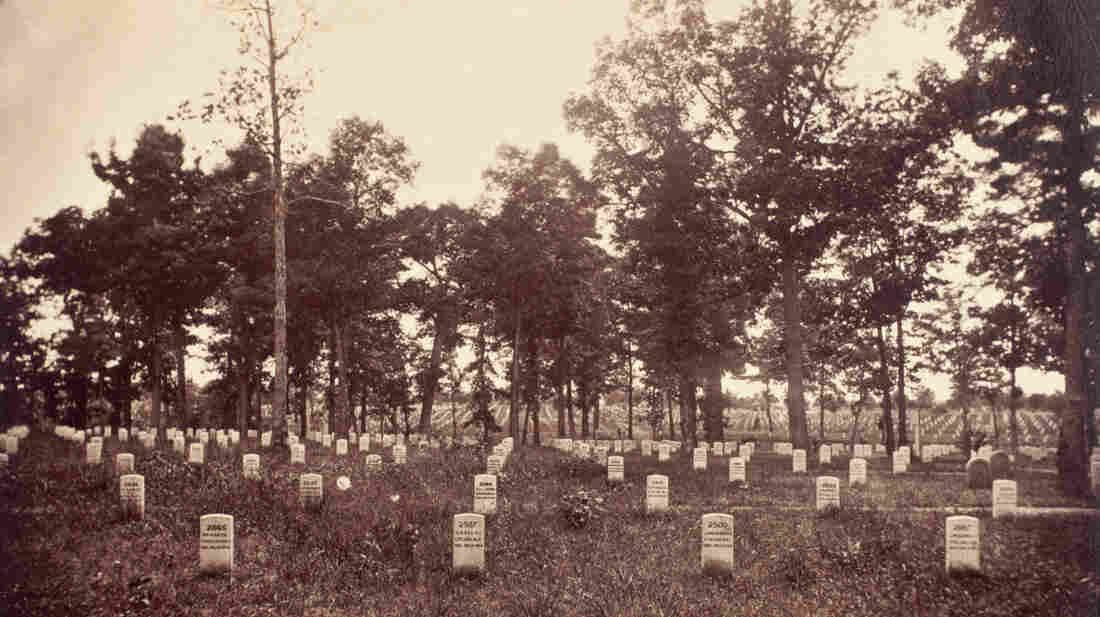 Arlington National Cemetery, in Virginia, 1865. During the Civil War, the United States established the cemetery on land belonging to the family of Robert E. Lee. Corbis hide caption 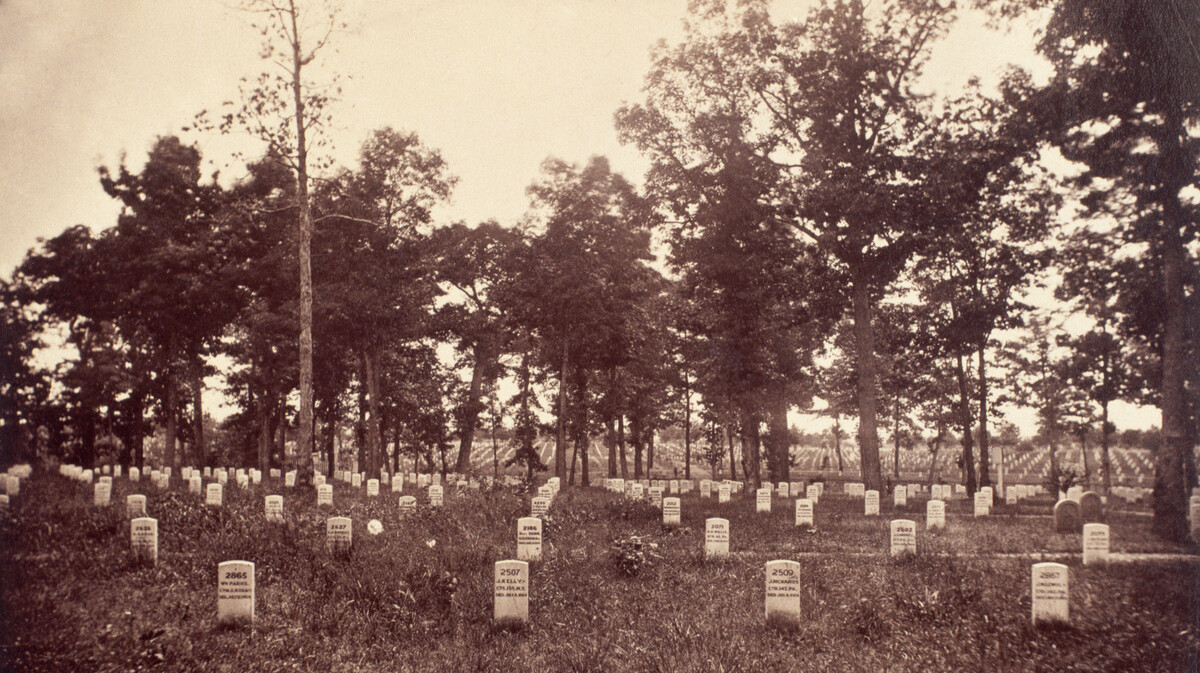 Arlington National Cemetery, in Virginia, 1865. During the Civil War, the United States established the cemetery on land belonging to the family of Robert E. Lee.

A century and a half ago in May 1864, the federal government had a problem. As the Civil War produced causalities at a rapid and brutal pace, the cemeteries in the Washington, D.C., area were filling up.

After scouting possible options for a new cemetery, preference was made for the vast estate of George Washington Custis Lee, the son of Robert E. Lee. The land was on high ground, better to protect against flooding that might resurface the buried, and it had a picturesque view of the capital.

The first soldier was buried at what is now Arlington National Cemetery 150 years ago this week. In recent decades, though, it has been steadily filling up again.

Consider these numbers: Today, more than 400,000 people are buried, cremated or in caskets, across the grounds' 624 acres. With 27 to 30 funeral services a day, five days a week, the cemetery is adding about 7,000 new burials a year.

There is only so much land, though it holds service members from every war in U.S. history, including the re-located remains of casualties from the Revolutionary War and the War of 1812. Almost 4,000 former slaves who lived in Freedman's Village lay to rest at Arlington, as do the remains of 5,000 unknown soldiers. So, too, lay John F. Kennedy, Thurgood Marshall and Medgar Evers, the civil rights leader killed in Mississippi in 1963. 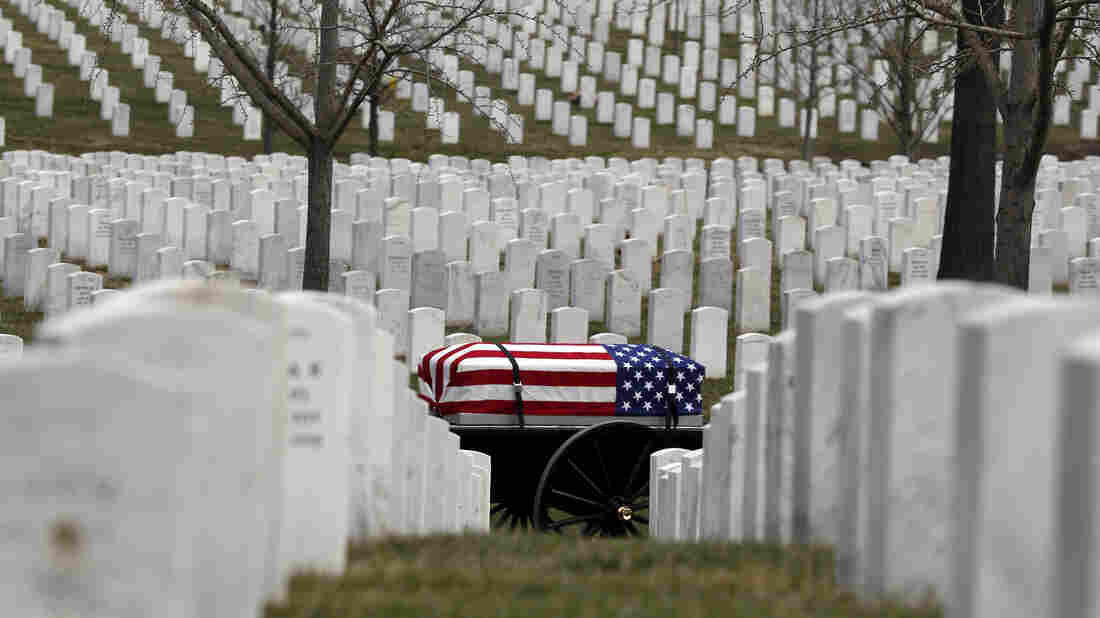 A flag-covered casket is taken to the burial site at the Arlington National Cemetery in March 2014. The cemetery has been filling up, despite expansions. Alex Brandon/AP hide caption 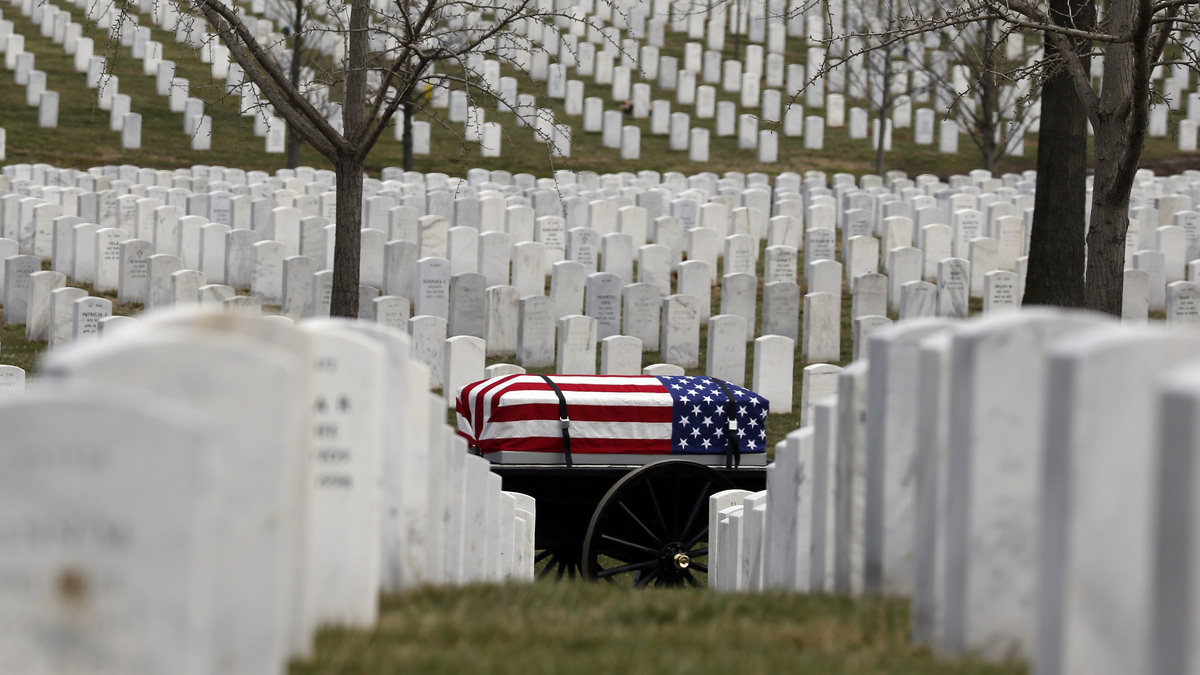 A flag-covered casket is taken to the burial site at the Arlington National Cemetery in March 2014. The cemetery has been filling up, despite expansions.

In an effort not to turn people away from the honor of being buried there, expansion projects have been proposed, fought for, adjusted and finalized.

Last year, a new columbarium added 20,000 spots, which can each fit multiple urns. Without it, the cemetery would have been filled up by 2016. Currently underway, the Millennium Project will add close to 30,000 interment sites on a 27-acre expansion on the north side of the grounds.

The Millennium Project is not without its controversy: How do you find more space to dig while preserving old-growth forests?

To balance preserving trees as old as the Civil War and making room, the cemetery and the National Park Service, which manages part of the grounds, have had to consider the impact on trees. Specifically the white oaks, chestnut oaks, hickory and eastern red cedar trees. Some of the oldest trees there are 250 years old.

Of the 8,500 native and exotic trees blooming on the grounds, an environmental impact study for the Millennium Project has focused on the Arlington Woods, which contains some trees that were around in 1779. The particularly old trees, the Park Service promises, won't be removed.

Why do these trees matter?

They connect us to history physically and metaphorically. There are 36 memorial trees in the cemetery meant as a living tribute to Medal of Honor recipients. More than that, some of the trees are direct descendants of the historic trees; saplings were grown from their seeds or cuttings. Perhaps it's an overly romantic notion to think of the trees as connecting the present day to the nation's bloody beginnings.

One day, though, the Arlington Cemetery will indeed fill up. When that day comes the graves, the fallen service members and the trees that have survived it all will remain.