Accessibility links
Softballers Face A Fielder's Choice: When To Wear A Face Mask? Softball is among the safest high school sports, but injuries do happen, especially from line drives. One Texas district is making some girls put on face masks before they step on the field. 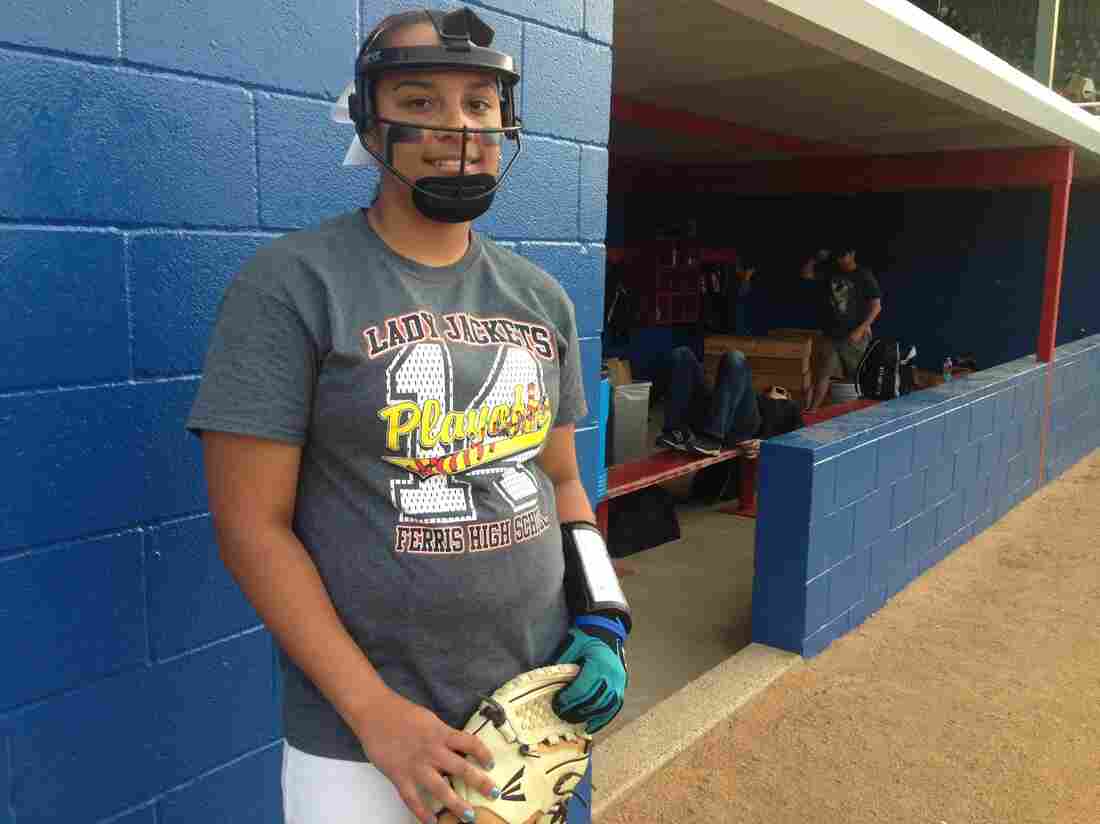 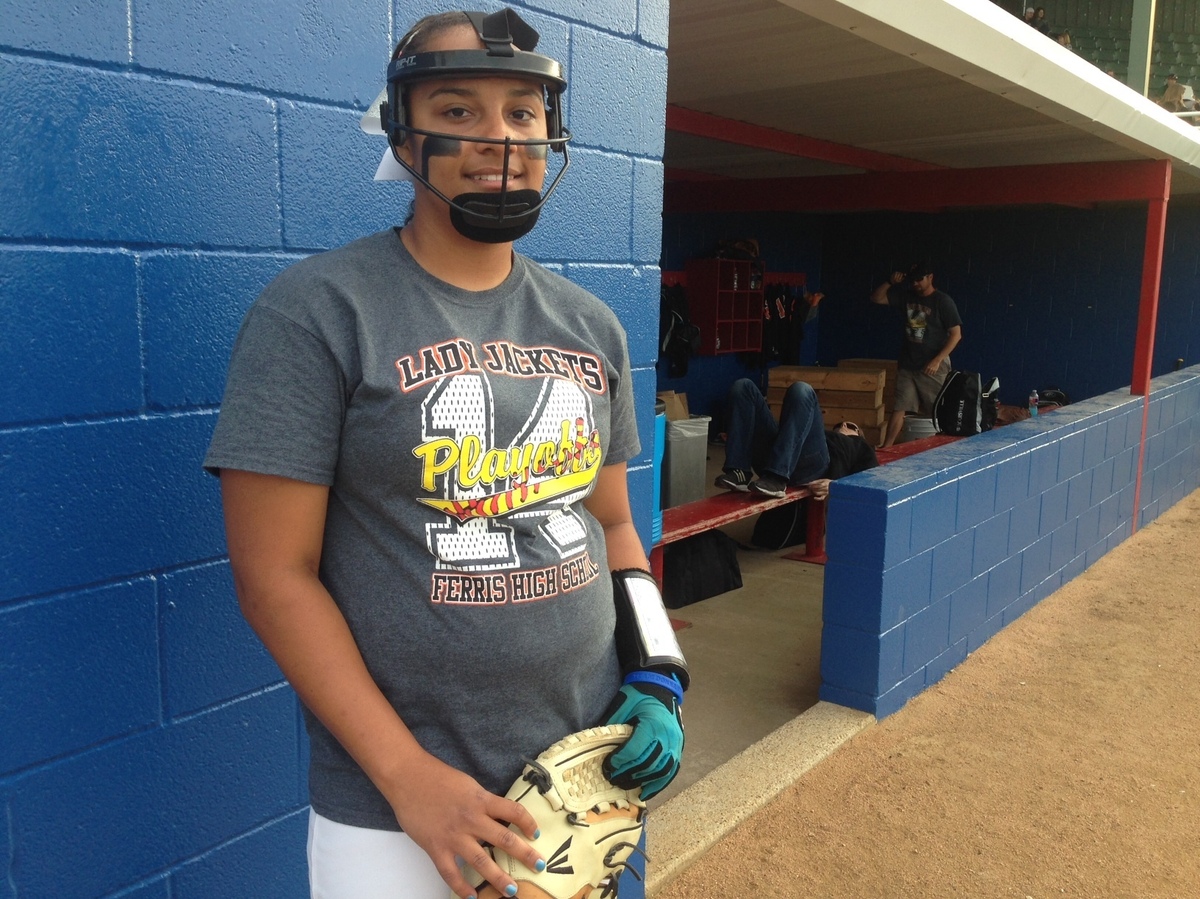 In Texas, it's playoff time for high school softball teams. While softball is one of the safest high school sports in the state, concussions remain a real risk for players — especially those who frequently field line drives from batters. That's partly why this year, fans and spectators can expect to see more girls wearing face masks than they have in the past.

Didi Duran, for one, knows what it's like to take a softball to the forehead. During a game last December, the 18-year-old senior at Ferris High School had crept in from her position at third base, preparing for a bunt, when the batter hit a line drive straight at her.

"I didn't think she was going to hit it as hard as she did," Duran says. "I guess I got too close, and it came off the bat and it hit me in the head."

An ambulance rushed Duran to a hospital. She doesn't remember much, but a photo of the bump on her forehead shows the red imprint made by the seams of the ball that had hit her. Her mom, Lisa, says that for months Duran had trouble getting down the stairs.

"She fell a couple of times just from being dizzy," her mother says. "The school had to watch her and we watched her, but she was down for a good three months with a concussion."

Duran is now back on the field, playing shortstop. At a recent game, two of her teammates wore masks that look like simplified catcher's masks. Leah Yarborough, a junior at Ferris High School, explains why she wears a mask when she plays: "You never know what can happen. The face masks aren't that bad. People say that it distracts you and it's just going to block your vision, but the one I have is just a bar over your cheekbone — nothing that distracts you." 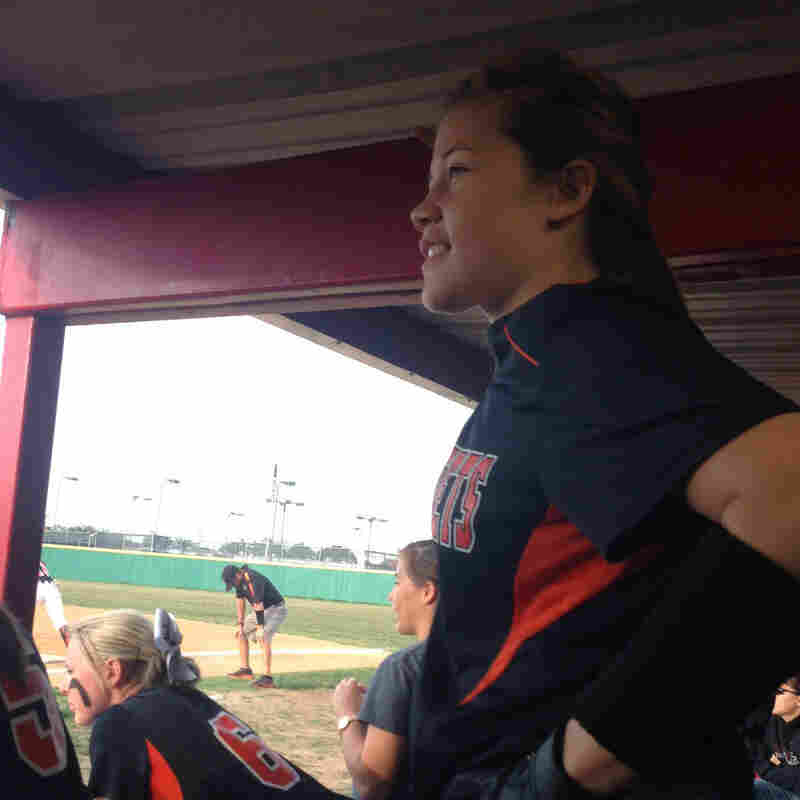 Didi Duran finds the face masks distracting. She takes the field without head protection, even though a concussion had her dizzy for three months. Lauren Silverman/KERA News hide caption 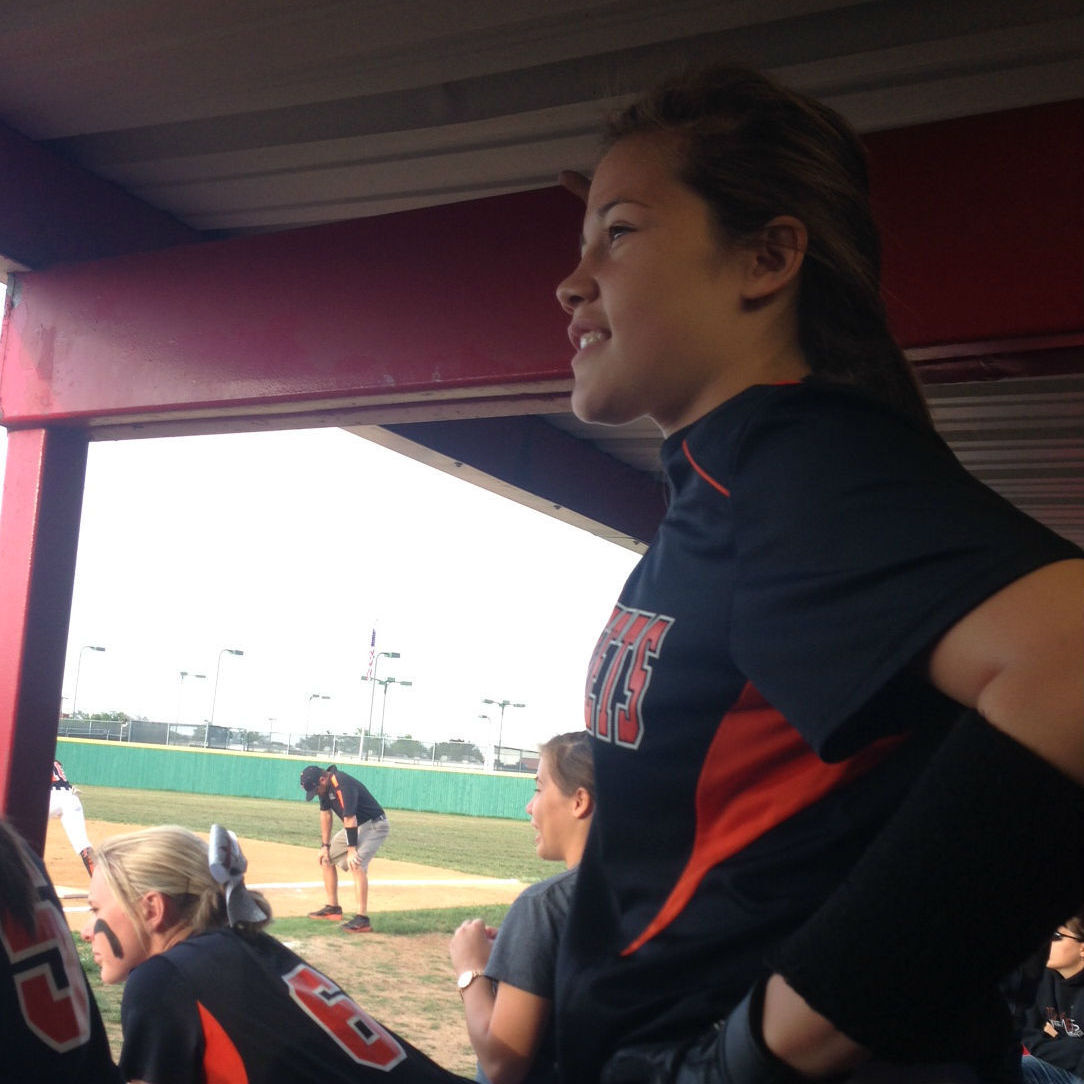 Didi Duran finds the face masks distracting. She takes the field without head protection, even though a concussion had her dizzy for three months.

Every year, more than two million girls between 12 and 18 years old play softball. Nearly 20 percent of all softball injuries in 2013 were to the head or face. So, Ferris High School coach Jock Eusay encourages all his infielders to wear face masks.

"When you're playing a team like we're fixing to play, that hits the ball really hard, they're getting line drives hit at them, and their reaction time isn't what it needs to be. It can be dangerous."

Since 2006, softball batters have been required to wear a helmet with a face mask. But there are no rules for infielders — and none in the works.

This means that players like Didi Duran don't have to wear a mask. And, despite her earlier head injury, she still doesn't. "I just don't like it. It gets in my way. It looks pretty stupid if you ask me."

Taking The Decision Of Out Of Players' Hands

Duran wouldn't have a choice, though, if she were going to school in the Richardson Independent School District, just 30 miles from Ferris. Richardson's athletic director, Bob Dubey, has made face masks mandatory for third basemen like Duran.

He says, "We take that decision out of their hands to where they're not scrutinized as looking goofy or looking not tough. We eliminate that problem, so that the girl doesn't have to make a decision; it's made for her."

Before the rule, Dubey says his players suffered broken noses, and one girl even had an ear partially torn off. Since the face mask rule, his district hasn't had a significant head injury.

Dawn Comstock of the University of Colorado Denver has been researching high school sports injuries. If you want to know how many girls got a concussion playing softball last year, she can tell you: close to 8,000.

She says, "Pitchers and third basemen, particularly, do sustain head injuries including concussions, but others as well — broken noses, knocked-out teeth, lacerations. A helmet with a full face shield would prevent the vast majority of those injuries. Now, do they sustain those injuries at a high enough rate to justify making that a mandated piece of protection equipment? That's not for me to decide."

For now, putting on a face mask in the infield will be a personal decision for players of the teams that make it to the Texas softball championship. Unfortunately, that won't be Ferris nor Richardson; neither team made it to the state playoffs this year.