Accessibility links
Pope To Travel To Holy Land With Rabbi And Muslim Leader Pope Francis will head to the Middle East this week to preach peace and has asked two friends from Argentina to accompany him, Rabbi Abraham Skorka and Islamic studies professor Omar Abboud. 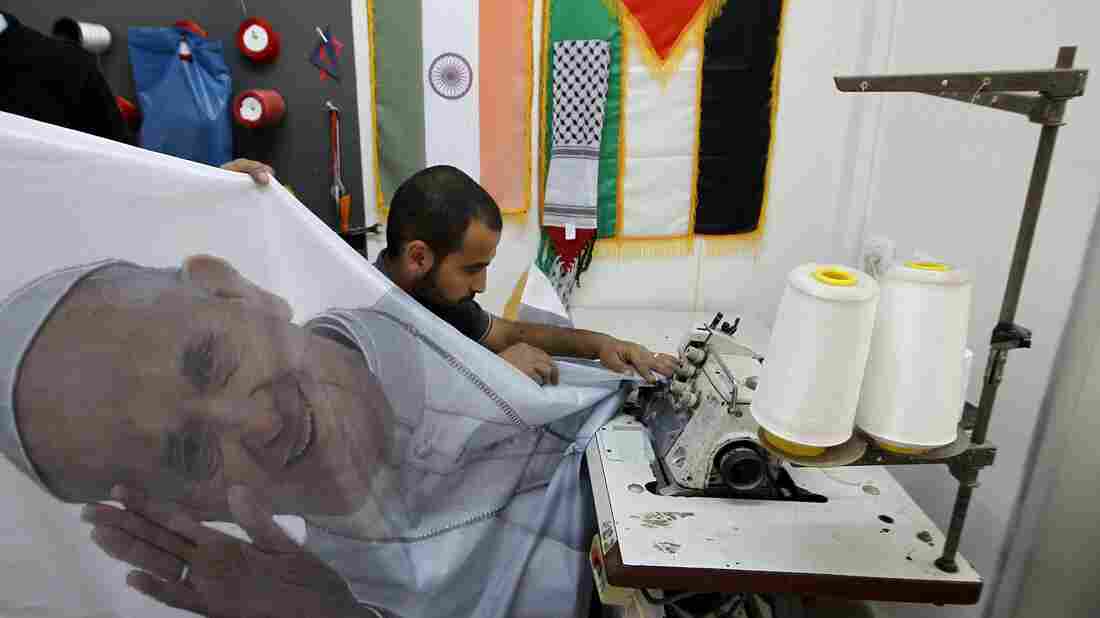 A Palestinian man works on a banner bearing a portrait of Pope Francis at a printing house in the West Bank city of Ramallah in anticipation of this week's papal visit. Abbas Momani/AFP/Getty Images hide caption 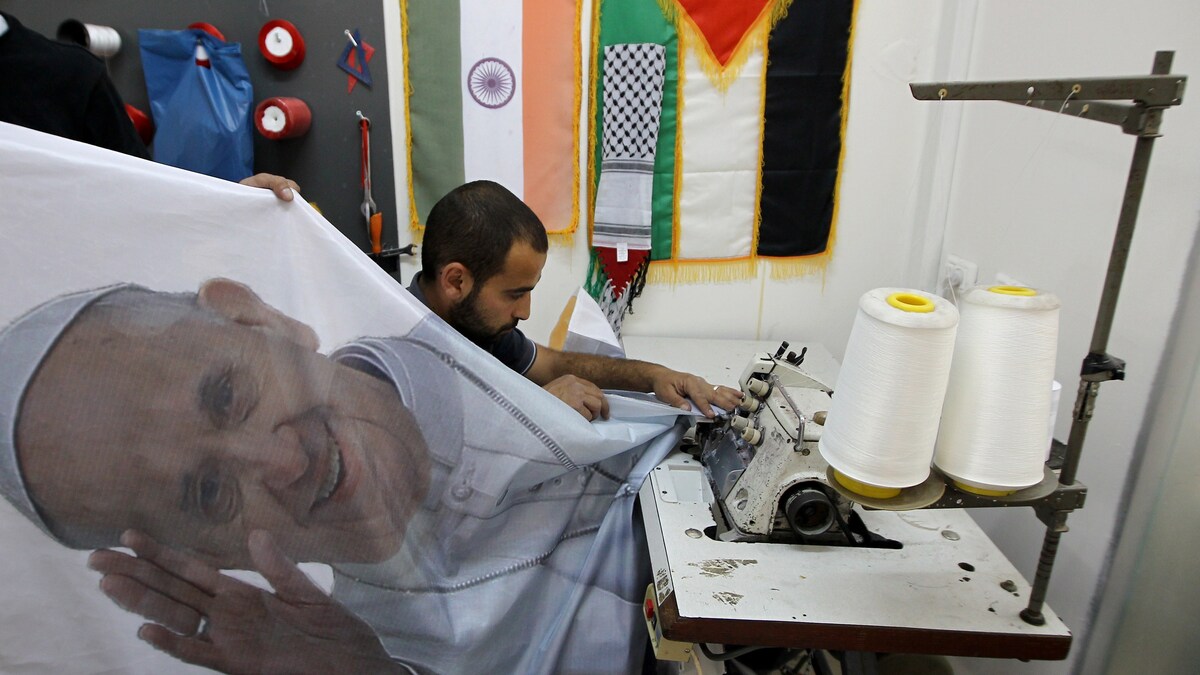 A Palestinian man works on a banner bearing a portrait of Pope Francis at a printing house in the West Bank city of Ramallah in anticipation of this week's papal visit.

The first non-European pope in modern history will makes a pilgrimage to the Holy Land this week, a region with centuries of religious strife.

Francis — the first pope to take the name of the saint of peace — will carry far less historical baggage than any of his predecessors.

When John Paul II visited Israel in 2000, he prayed at the Western Wall and apologized for the church's sins against Jews. Nine years later, at Yad Vashem, the memorial to the Holocaust, Benedict XVI urged that the names of the victims never perish, be denied or forgotten.

Those two popes, one born in Poland and the other in Germany, carried the weight of their countries' histories: centuries of anti-Semitism in Poland; Nazism and the Holocaust in Germany.

Rabbi David Rosen, director of Inter-Religious Relations for the American Jewish Committee, says when Jewish and Catholic religious leaders meet, they focus mostly on the past.

"We have long memories, sometimes for better and sometimes for worse," Rosen says. "And if you don't encounter Christians on the positive human bases in the here and now, you are often captive to those tragic memories of the past, and that requires quite a lot of time and energy before the necessary healing has effect."

But the Argentine-born pope is less interested in history, says John Allen, Vatican analyst for The Boston Globe. 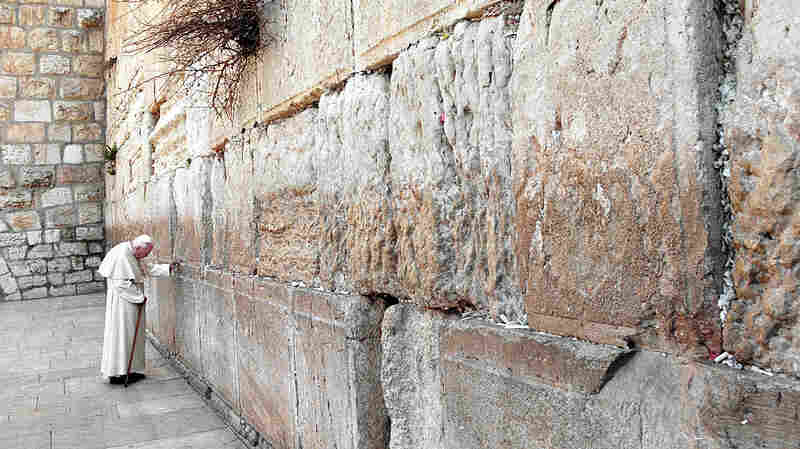 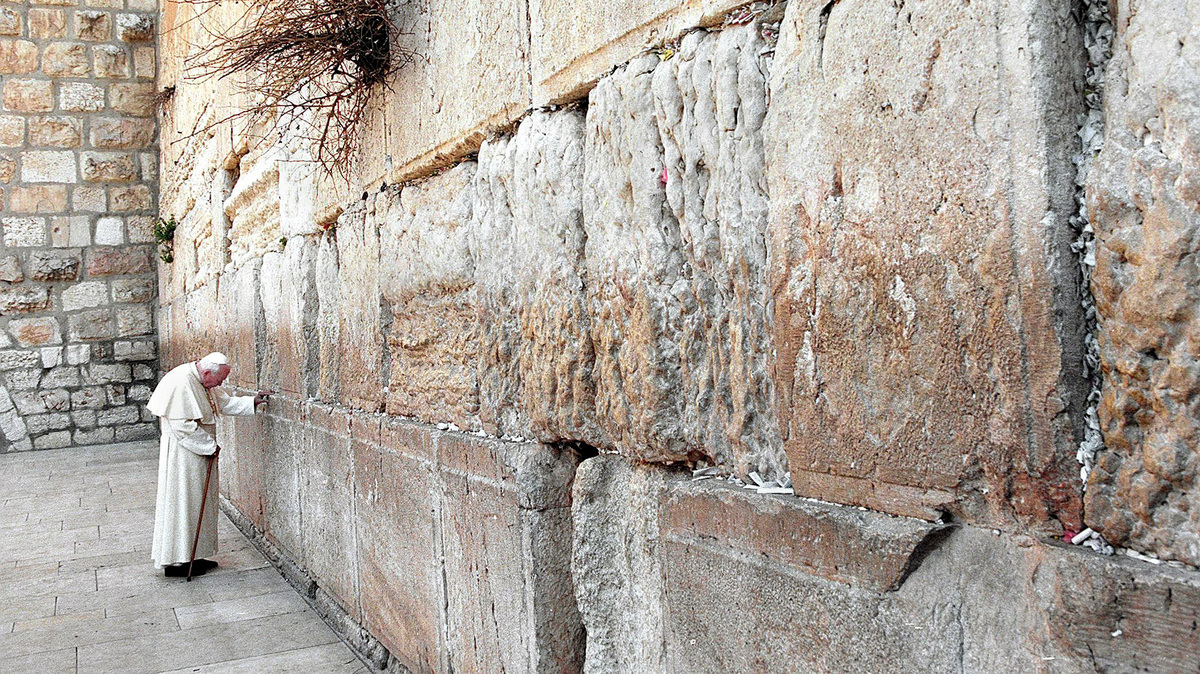 Pope John Paul II visits the Western Wall on a trip to Jerusalem in 2000.

In an unprecedented move, Francis asked two friends from Argentina to accompany him to the Holy Land, Rabbi Abraham Skorka and Islamic studies professor Omar Abboud.

As archbishop of Buenos Aires, Francis wrote a book with Skorka called Heaven and Earth. Skorka says growing up in a cosmopolitan city and going to the same schools created a special bond between people of different faiths.

"We shared lot of experience — being together, Jews, Christians — learning [about the other]. We were not in a closed ghetto," Skorka says. "We were in touch, one with the other, maintaining each one his own tradition but knowing that there exists another, that the other can be your friend, being other."

With Francis, the Catholic Church has the opportunity to present itself with a clean slate — and not just with Judaism.

In September, just months after he became pope, Western powers appeared ready to go to war over Syria. But Francis declared his opposition, calling a worldwide day of fasting. It was an anti-war action, says Allen, that won the pope much goodwill in the Islamic world, in many parts of which the memory of the Christian-led Crusades is still alive.

"In the Muslim street, the fact that he came out against Western intentions to invade a Middle Eastern Muslim nation, that is Syria, earned him a lot of political credibility," he says.

Francis will pray with Syrian refugees in Jordan on Saturday. He'll then travel to Bethlehem, Jesus' birthplace in the Palestinian territories. Finally, he'll visit Jerusalem.

He'll also commemorate the 50th anniversary of a historic rapprochement between the Catholic and Orthodox churches. And he'll appeal for an end to the Christian exodus from the Middle East, where more and more Christians are dying in recent conflicts.

In a part of the world where politics and religion are closely entwined, Francis' every word will be carefully analyzed, as well as his new geopolitical strategy, Allen says. "His position on Syria was closer to Putin and China than to the major Western powers. To break that centuries-old attachment to the Western powers and align himself with some of the new rising powers of the world, I think, said something of the new globality of the Catholic Church."

The pope from the global South is forging a new ad hoc diplomacy where the Vatican could play a completely new role on the international stage.