Accessibility links
Remembering Two Lives: Which Are The 'Real' Children? In Jo Walton's elegant, heartbreaking new novel, an elderly woman remembers two distinct lives and families, in parallel timelines splitting off from one crucial decision: to marry, or not to marry?

Remembering Two Lives: Which Are The 'Real' Children?

Remembering Two Lives: Which Are The 'Real' Children? 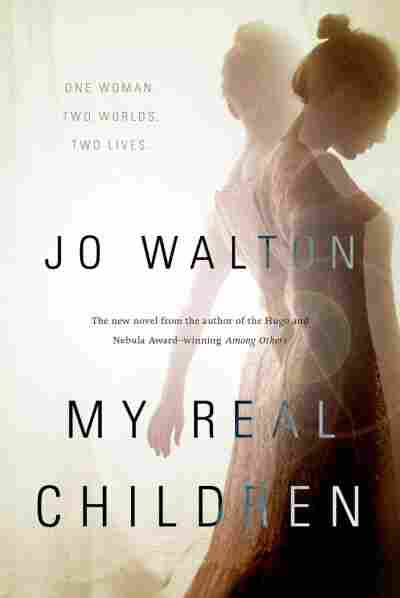 There's a photograph of my mother's side of the family that I often think about. In it are my mother, her five siblings, and a host of children and cousins. Nestled into the center of the photograph is my grandmother, small and frail by then, but without whom none of the rest would be there.

That sense of marvelling at what multitudes could come from one person — within sight of that person — stayed with me throughout My Real Children.

Patricia Cowan has lived a long life, and in 2015 is in a nursing home, being visited by her children. While wrestling with dementia and memory loss, she reflects on how strange it is that she remembers two distinct lives: one in which she has four children, and one in which she has three. As she ponders this she traces her life's bifurcation to one crucial moment, when she decided to marry — or not marry — her fiancé, Mark.

From there the narrative splits into a recollection of each life, one lived as Tricia and one as Pat. But as we follow these parallel lives, it becomes clear that the 20th century worlds Pat and Tricia inhabit are aslant our own — and that just as the events of each woman's personal life are different, so are the politics, the wars, and the societies through which they move.

I keep wanting to say this is an elegant book, but that's not enough to convey my meaning: that there isn't a word wasted, that there is a deliberateness in its every moment and movement, no matter how small. The cruelties are horrific and heart-breaking, but economically so; the happinesses are writ small, but glow fiercely. There is a restraint throughout that is part of Patricia's personality, an evenness and a fairness in the face of enormous life events which I found tremendously compelling.

And there's a broader balance, in which the joy in Tricia's life waxes while that in Pat's wanes. It made for interesting reading — when I felt crushed by Tricia's pain I could take refuge in Pat's pleasure, until the point where I realised the opposite had started happening. This, too, is elegant: the shape of the book, the crafting of its overall arc while the experience of the story is so thoroughly in the details.

Those details are beautiful. Genre books that represent Christian faith with such tenderness and care are few and far between; even fewer and farther between are genre books that focus on the lives and memories of elderly women. Walton's representations of disability and the indignities of ageing are unflinching, matter-of-fact, and important. I loved, deeply, that this was a book half about women growing old together, half about a woman growing old mostly alone, and wholly about the responsibilities shared between parents, children, and the communities they shape together. I loved, too, that after the initial shock of the early years' difference, both Tricia and Pat have lives that are mixed bags of loss and gain — that rather than being tidy opposites, they're more like cuttings placed in different soil that both succeed in flourishing.

If there was one thing that didn't entirely succeed for me, it was that in one of the worlds, nuclear fallout seems relatively manageable, at least as it touches the main characters — which I felt affected the book's careful balancing act between Tricia and Pat's experiences. But for the most part, I settled into their respective lives and the families they formed with ease and a hunger for their happiness, whether that happiness was granted or withheld.

My own grandmother suffered from Alzheimer's towards the end of her life, and the representation of Patricia's experiences — both with her own mother's dementia, and then with her children as she begins to lose her memory and clarity of thought — resonated with me very much. I won't say it's comforting per se, but it is, perhaps, a support of a kind, to think that in her last days my grandmother too might have reflected on more than one personal history — at least one in a different, happier, easier world — and that she, too, might have hovered on the cusp of a choice of which one to keep.

Read an excerpt of My Real Children