Accessibility links
Full Of Warmth And Wisdom, 'Vacationers' Is A Frothy Beach Read The Vacationers is a cinematic family drama set on the picturesque island of Mallorca. While the narrative arc verges on predictable, the book's screwball charms make for a pleasant diversion. 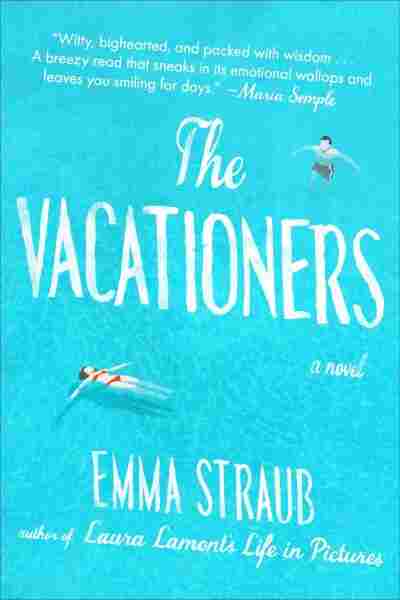 Meet the Posts — no relation to Emily and her rules of etiquette. The stressed family of New Yorkers in Emma Straub's breezy summer read, The Vacationers, are the kind of people who pack their troubles on top, for easiest access, when they head off on a trip together.

Sixty-year-old Jim Post has been kicked out of his beloved job editing Gallant magazine after an indiscretion with a 23-year-old editorial assistant whose father sits on the publication's board. His briskly efficient, 58-year-old wife, a pleasingly plump food writer named Franny, is furious and hurt, but decides to go ahead with their two-week family jaunt to Mallorca, which was planned ages ago to celebrate their 35th anniversary. By the end of the trip, she says she'll decide whether they will stay together in their roomy Upper West Side Manhattan brownstone or join the tide of "third wave" divorces that washes over so many empty-nests.

Accompanying them to their rented villa in the foothills of the Tramuntana Mountains is their 18-year-old daughter, Sylvia, eager to miss the last round of pre-college parties after snapshots of her making out drunkenly with a series of guys have turned up all over the Internet. She can't wait to reinvent herself at Brown, but first, she hopes to learn Spanish from her dreamboat of a tutor, and maybe lose her virginity in the bargain.

Then there's her partying older brother, 28-year-old Bobby, who's been living in Miami since college selling real estate. Now that the market's gone soft, he's been working with his 40-year-old Cuban-American girlfriend, a personal trainer named Carmen, hawking protein powders on the side. The joke is that while the intellectual, artsy Posts are snobbish about this sequin-bedecked, muscular woman who "looked like one of the Spice Girls after a decade out of the spotlight," she's the least spoiled of the lot, a disciplined grownup with solid values who's been supporting herself since she turned 16.

Also joining them are Franny's very best friend, Charles — so close that he sits on the toilet seat and chats with her while she takes a bath — and his husband, Lawrence, who's desperate to adopt a child and feels unhappily "invisible whenever Franny Post was in the room." As Charles notes, grateful for Lawrence's forebearance, "two whole weeks with the Posts was not everyone's idea of a vacation."

That's the set-up, which Straub plays for its cinematic screwball potential, a slightly forced effervescent sensibility infused with nice touches of wisdom and warmth. It's more charming than her first novel, Laura Lamont's Life in Pictures, though it features a similarly predictable narrative arc – in this case, beginning and ending with a plane flight. Don't expect earth-shattering revelations: The Vacationers offers entertainingly packaged life lessons along the lines of "Marriage is hard. Relationships are hard," "The Internet was excellent for confirming one's worst fears about the human race," and "The human heart was a complex organ at any age." In other words, an untaxing, pleasantly diverting read for beach or plane.

Read an excerpt of The Vacationers