Accessibility links
Stories Of Loss, Brightened By Luminous Language The nine tales in Elizabeth McCracken's Thunderstruck deal with death, tragedy and darkness, but the collection shines due to the mesmerizing strangeness of its extraordinary images. 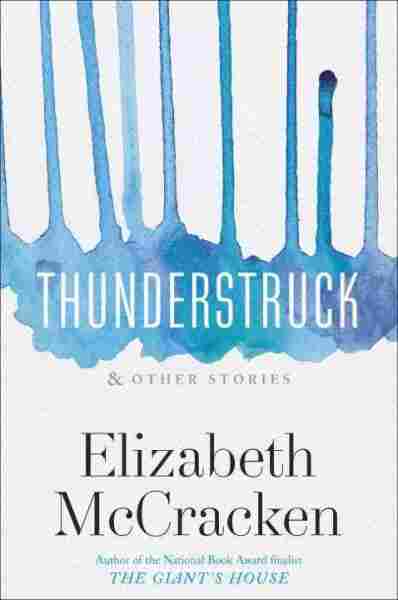 Elizabeth McCracken is a former public librarian best known for her quirkily endearing 1996 novel, The Giant's House, about an unlikely romance kindled at the circulation desk between a petite librarian and a freakishly tall boy. Over time, her work — filled with misfits, giants, and oddballs — has become darker. Loss dominates the triple-trinity of stories in her new collection, Thunderstruck, though she continues to slyly celebrate resilience and unlikely connections.

In tale after tale parents lose children to lymphoma, to abduction, to murder charges, to drugs, to brain damage. An undersized teenager's mother disappears, leaving him with his wicked grandfather, who nearly starves him to death. A newly widowed man learns about the solace of personal property when he tries to make a decrepit rental feel like home by clearing out what he considers to be the owner's junk. Another man, still bitter over the way a former best friend made him seem like a pompous ass in a television documentary decades earlier, struggles to come to terms with what happened between them before succumbing to pancreatic cancer. Yet, "the world goes on. The world will." And, of course, as one bereft mother observes, "whatever you have lost there are more of, just not yours."

Why read such grim stuff, you may ask. The draw here is mesmerizing strangeness, heightened by McCracken's extraordinary images: "epaulets of steel-gray hair" on an older man's bared shoulders; a "psoriatic" porch on a crumbling, "toothpaste blue" Sears Roebuck kit house; a son's callous payback to his neglectful parents, which his father blindly attributes to a "melanoma of the soul" caused by "overexposure to the rays of love." McCracken's description of eyeglasses which are "the opposite of the weather: overcast when it was bright, clear when it was cloudy" will color the way you see transition lenses as surely as her off-kilter tales will subtly shade your view of love and parenting.

"Some Terpsichore" is classic McCracken — a consummately bizarre yet oddly moving love story. The handsaw at its center, which is likened to "a house key from a giant's pocket," is both musical instrument and weapon in the hands of a tender but abusive "pile of man with a blade at the heart" who had hair that "looked like it had been combed with a piece of buttered toast." As for the woman who fell under his spell 40 years earlier, she asks, "what's love at first sight but a bucket thrown over you that smoothes out all your previous self-loathing, so that you can see yourself slick and matted down and audacious?" True enough, she admits, "It was not nice love, it was not good love, but you cannot tell me that it wasn't love."

In "Juliet," McCracken filters a brutal local murder through the perpective of the town's librarians, who form a sort of Greek chorus commenting on the tragedy. Both the victim, a young divorcée whom the librarians have dubbed Juliet because of the way she clutched her book "like a knife she was prepared to use on herself," and the suspect, a young boy who frequently borrowed mysteries for his grandfather, were regular patrons. But grief and guilt, the librarians learn, are even more far-reaching than their extensive database.

You keep thinking about McCracken's tales because the mysteries or tragedies are open-ended and also ultimately beside the point. Did the boy actually stab Juliet? Who knows. What's important is how the murder affects the librarians. Similarly, in the title story — in which the ineffectual parents of a difficult pre-teen pay a steep price for not wanting to know what's really going on with their daughter — the point is how her dire accident ultimately affects them. (Although McCracken stirs empathy for even the most misguided of her characters, she slips up a bit with these clueless parents, making it too easy for readers to feel superior to them.)

"There wasn't a man in the world smart enough to see his own subtext," McCracken's hoodwinked documentary subject finally realizes about his unfortunate performance on video. In Thunderstruck, McCracken explores her characters' subtexts even as she catches them in the car wrecks of their lives. To resist gawking is hopeless. Brace yourself for rubbernecking delays.