Accessibility links
God, The Devil And 'Hannibal' While many expected little from NBC's show about Hannibal Lecter, the show has become something quite surprising: a nuanced exploration of divinity and love.

God, The Devil And 'Hannibal'

God, The Devil And 'Hannibal' 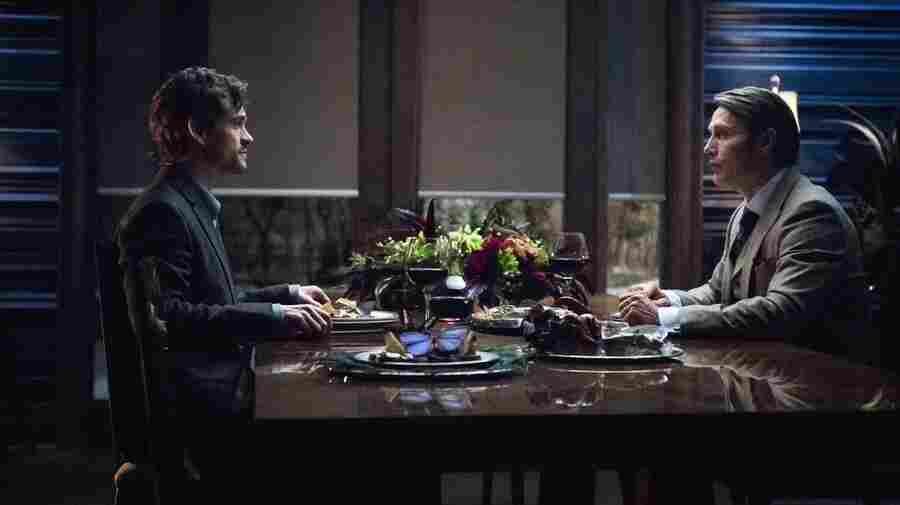 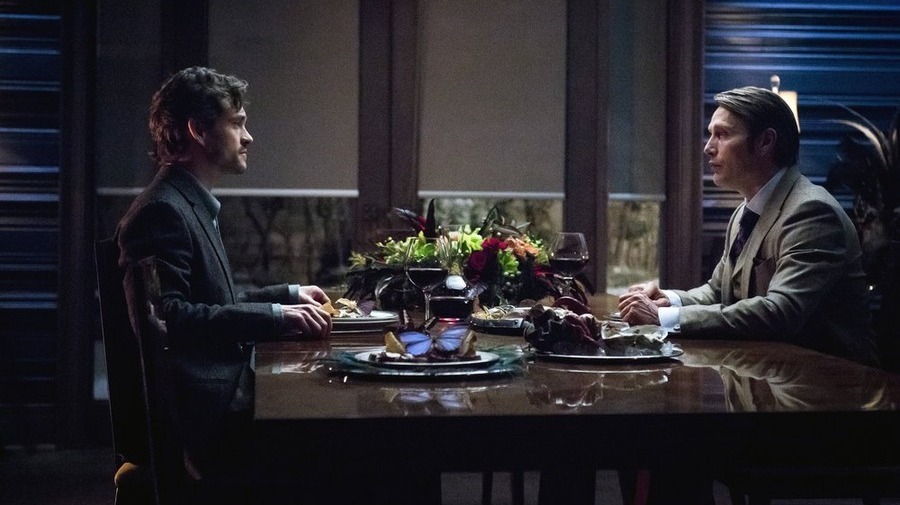 Hugh Dancy as Will Graham and Mads Mikkelsen as Hannibal Lecter in NBC's surprising Hannibal.

Hannibal Lecter is a known quantity. He is the thinking man's boogeyman, made larger than life first in Thomas Harris' novels, then in a variety of films. The character was, is, iconic. So when NBC announced it was developing a series revolving around the character in 2011, conventional wisdom declared it a terrible idea. After all we knew about Hannibal Lecter, how would it be possible to revisit the character and his world in a new and interesting way?

The answer, perhaps unsurprisingly, was through upsetting expectations.

It's a shockingly obvious solution, perhaps, but one that has worked gangbusters for the series now finishing its sophomore season. The show, once thought doomed to languish as an unnecessary rehash of an overexposed story, instead found resurrection and transformation by exploring ... well, resurrection and transformation. There was horror and there was cannibalism, sure, but they were flanked by examinations of friendship and fidelity, trust and redemption.

But perhaps what would have been most surprising to those who wondered what was left to explore in this story of brutality is Hannibal's exploration of love, particularly between Hannibal Lecter and Will Graham, the criminal profiler pursuing him. Though Tumblr may have you believe otherwise—respect, 'shippers — Will and Hannibal are not in love. No, the love Hannibal has for Will is something so much bigger than that. The term "agape," or unconditional love, was co-opted by Christianity to describe the love that God has for humanity, and Hannibal takes that idea one step further: What if instead of referring to the love Christ has for man, agape instead referred to the love the Antichrist has for a man? It's just the most notable reversal on a show chock-full of them. But they all lead back to this one.

It's true that the focus on this relationship can reveal some of the show's shortcomings — Hannibal can become so focused on the relationship between the two male leads that the story's women end up a bit underserved. But the show's position with regard to gender stereotypes is far more nuanced than a simple eclipsing of the women by the men might suggest.

This central relationship between Will and Hannibal is a far cry from male/male friendships as typically seen on TV. In place of the posturing and testosterone-laden exchanges the medium often favors, the bulk of Hannibal's male bonding takes place in the refined confines of a therapist's office or around an immaculate dinner table.

More than that, Hannibal Lecter and Will Graham are both characterized in a fashion that decidedly feminizes aspects of their personalities without diminishing their overt masculinity. Lecter is a complicated man with sophisticated tastes. (Of a sort.) His hobbies are often delicate: elaborately cooked cuisine (of a sort); composing on his harpsichord. And that's to say nothing of his clotheshorse tendencies. Even the man's kill-suit is tailored within an inch of its life.

On the other hand, Will Graham is a brilliant criminal profiler who excels at his work because he literally feels too much. He's too empathetic — and not in the cliched "rogue cop who cares too much (about being right)" kind of way. No, Will suffers in an "empathy disorder that enables him to feel the feelings of every person" kind of way. It's no surprise that outside of fishing, Will's main hobby seems to be collecting stray dogs to add to his merry band of fuzzy misfits.

Often, male relationships are depicted exclusively through gruff exchanges of grudging respect. But here, affection is tackled head on, as are accusations. As foreign as the concept may seem with regard to a serial killer and the man he is painstakingly trying to manipulate into becoming one, it's not much of a stretch to say that the burgeoning friendship of Lecter and Graham is underpinned with love.

So at heart, the show's primary bond is the love between a cannibalistic culinary fashionista and a crazy cat/dog person. On the surface, that reads like the worst episode of Sex and the City ever, but it's that inversion of the bluntly obvious masculine power struggles of most of television that allows Hannibal's main relationship to bloom into something new and different where something like True Detective shrivels on the "been there, done that" vine.

Lecter views Graham with a gentle camaraderie that fuels all of his manipulations. In fact, this gregarious expression of his love is spread equally across most of the characters on this show, if evidenced only by the fact that he hasn't killed them yet. The characters exist, yes, as people whom Hannibal can manipulate to his ends, but Hannibal can manipulate anyone. That Alana Bloom and Jack Crawford and, yes, Will Graham, are still alive is a function of the respect and admiration Hannibal holds for them. For now.

In Hannibal love — affection — is always underwritten with manipulation. The manipulator cares too much for the manipulated not to bend him to his will if it's for the best. Hannibal manipulates Will because he recognizes Will as someone special and rare, a potential equal. Will manipulates Hannibal because, well, he's a serial killer. But a fascinating serial killer.

Ultimately it is Hannibal's love for Will that drives the show. Perhaps the purest form of agape on television, it's not something born from sexuality but from inception. Hannibal loves Will the way a god loves his creation, unwavering and true, with pride and tenderness.

This pious love is also the center of Hannibal's most blatant, and most daring, undermining of expectations. In interviews, showrunner Bryan Fuller has mentioned that it's entirely possible that Hannibal Lecter is the devil himself made manifest. And while such a revelation would not be far from the realm of possibility given Lecter's nearly supernatural gifts, the show often paints the character in a far more divine light.

Getting to that bottom of this particular duality requires a long, hard look (or at least a brief, simplified look) at the framework of early 20th century German theology. (Naturally.) Rudolf Otto introduced the idea of the numinous in his book The Idea of the Holy in 1917, in which he describes it as the concept that underlies all religion and has three parts: mysterium, tremendum and fascinans. Mysterium encapsulates that which is "wholly other" and exists as something completely separate from ordinary life; tremendum is that which terrifies and inspires awe, that sense of nothingness in the face of ultimate power. That leaves fascinans, the element in which charm and attractiveness win out even in the face of said terror.

You can see where this is going.

Intentional or otherwise, Hannibal Lecter is not the devil; he is god. He is that force in his universe that exists in concert with but still wholly outside the world at large. He is something unnatural. Uncanny. He is the danger. He is the unknowable presence lurking in the shadows. He is omnipotent. He is omniscient. And he will beguile. He will persuade. He will manipulate. He will undermine your fear with fascination and your seduction will be your undoing.

Devil as god, manipulation as love, feminine as masculine, these are how Hannibal crafts a story and re-imagines a known quantity. And in doing so, Fuller et al. have succeeded in making not just a cogent adaptation but one of the finest dramas on television, all by tapping into the inherent terror of being made over not in God's image, but in Lucifer's.