Accessibility links
The Bending Of Time And The Elasticity Of 'X-Men' X-Men: Days Of Future Past is a time-travel movie, but not only because of its plot. It's also an experiment in how to continue a franchise without the potential complications of starting over.

The Bending Of Time And The Elasticity Of 'X-Men'

The Bending Of Time And The Elasticity Of 'X-Men' 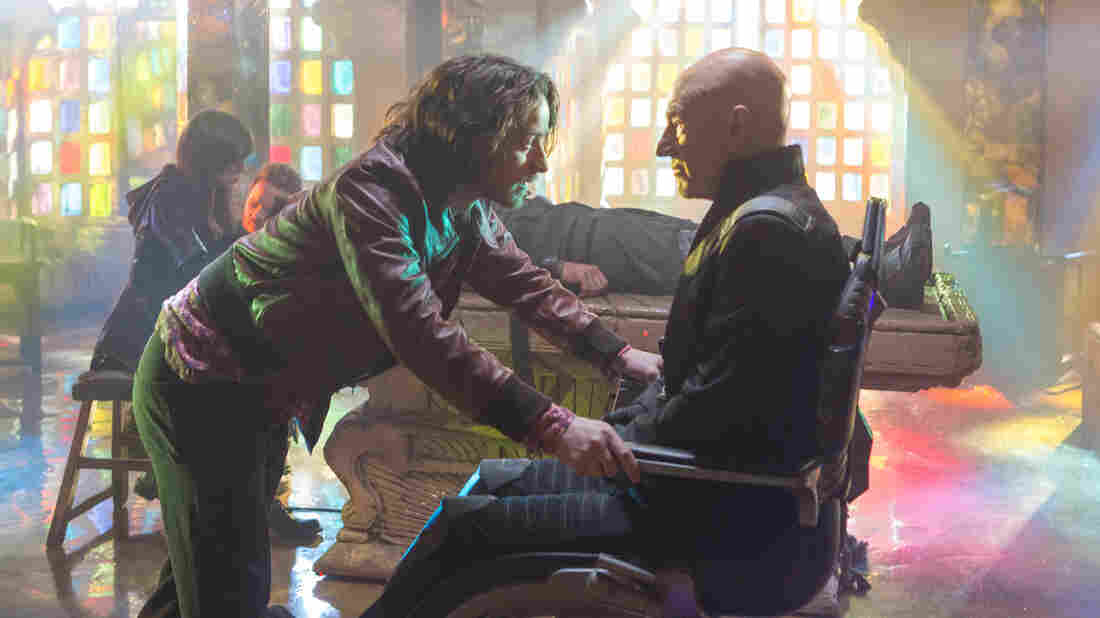 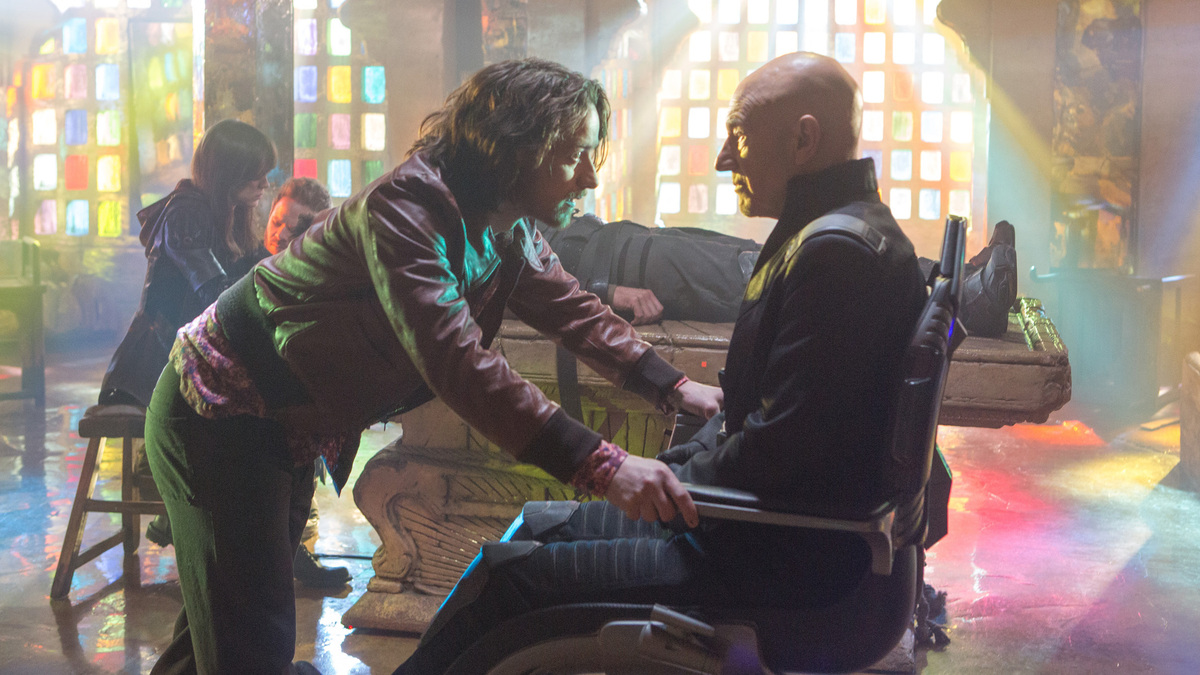 It's no secret that X-Men: Days of Future Past — the fifth X-Men picture in 14 years, give or take a couple of solo Wolverine movies, and the fourth good one — is a time-travel movie. It borrows its title and much of its premise from a well-loved story by Chris Claremont and John Byrne published in The Uncanny X-Men Nos. 141 and 142, back in 1981.

The film opens in another soot-covered future wherein global war between humans and mutants (like our beloved X-Men) has scorched away every green thing that ever grew, leaving Earth an eternally cloudy, bombed-out, skull-littered hellscape like the ones seen in The Terminator and The Matrix and every other wretched-future sci-fi picture made by people who grew up on X-Men. Via methods never explained (or possibly exposited so quickly I missed them), lifelong frenemies Professor X and Magneto have determined that in this dystopia, they are reaping what was sown half a century earlier, when the shape-shifting mutant Mystique assassinated the inventor of the Sentinels — giant, mutant-hunting murderbots.

So they dispatch the hardiest, most popular X-Man — old knifey-knuckles, once again played with disarming (and disemboweling) fervor by Hugh Jackman, the only actor who generally seems grateful to headline a billion-dollar superhero franchise — to the bell-bottomed, lava-lamp-illuminated past of 1973. His mission? To recruit Prof X and Magneto's younger, sexier selves (James McAvoy and Michael Fassbinder) to help him foil the assassination and, they hope, prevent the war.

Poor James Bond. Among the many long-lived characters who've somehow remained no younger than 25 and no older than 50 for decades — a list that includes nearly every superhero to get his or her (ha ha, just kidding, his) own movie in the past 35 years — he's one of the few whose rules of engagement don't allow for time travel. Ah, time travel: the ingenious storytelling (and franchise-housekeeping) device that allows these characters to seem relevant and vital long after their first generations of fans are dead.

2012's Skyfall, the freshest Bond picture and the most financially successful, did something clever: It deliberately stymied any attempt to orient it in Bond's already-insoluble cinematic timeline. It follows Casino Royale, the only clean-slate Bond reboot, by a mere six years, but it feels informed by every iteration of the character that followed the events of that origin flick. (The Bond producers, to their credit, never lost any sleep trying to preserve a coherent sequence of fictional events. The first time they recast the part, they even had George Lazenby, the single-serving 007, look into the camera and quip, "This never happened to the other fella." Oooof.)

But nerds care about this sort of thing more than civilians do. That's why several generations of comic book editors have been able to flog their periodic continuity-cleanup efforts as must-read event stories. DC Comics' mid-'80s Crisis on Infinite Earths series "erased" decades' worth of stories and killed off many major characters. Twenty-six years later, DC detonated the Genesis Device again, resetting all of its monthly comics at issue No. 1.

Superhero stewards have always had itchy trigger fingers when it comes to the reset button. The very first superhero blockbuster, Richard Donner's Superman from 1978, climaxed with Superman flying into the past to prevent Lois Lane's death in an earthquake. Quibblers asked themselves: Why should I care about anything else that ever happens in this series, if everything is reversible and correctible?

Thirty-five years would pass before Superman was rebooted in Man of Steel. The Caped Crusader needed less than half that interval, restarting the clock with Christopher Nolan's Batman Begins only 16 years after Tim Burton's Batman. Spider-Man? Only 10. Louis Letterier's 2008 The Incredible Hulk ignored the events of Ang Lee's too-arty-for-the-multiplex Hulk from 2002, giving that nonfranchise franchise a refractory period of a mere six years.

Credit the producers of the X-Men series with figuring out a way to avoid all that, or at least delay it.

All stories are time travel, of course, in that they remove us from our present. They need our consent, to it, obviously, which we usually call suspension of disbelief. Movies, especially, were made for time travel. Every recorded image is a window into the past.

Bringing the complicating agent of time travel into the already byzantine X-Men mythos was a smart move on the part of returning director Bryan Singer, who helmed the first two, well-received X-features before abandoning the third to make Superman Returns. (Curiously, that elegiac wannabe-blockbuster was half a reboot, following the events of Superman and Superman II but calling a mulligan on the later, less beloved movies.)

Matthew Vaughn was signed to replace Singer, but he decided he couldn't do a good job in the time allowed. Fox refused to budge on the May 2006 release date, and so Brett Ratner, an unfussy, get-'er-done type, stepped in. X-Men: The Last Stand was that odd specimen that only cherished geek franchises seem to produce: Everyone says they hated it, but it was the biggest-grossing entry in the series. In it, several major characters appeared to meet their end.

Anti-Ratner fan outcry is probably at least part of why Vaughn was welcomed back to the fold to make 2011's X-Men: First Class, which had the genius stroke to set the X-Men's origin in the same era they were first introduced in the comic books: the 1960s. Taking the prequel route was a savvy way of sidestepping the narrative mess left behind by Ratner's rush-job movie. It also allowed Vaughn to indulge in some (early) Mad Men-era fashions and explore how the presence of superpowered mutants might've come to bear on historical events familiar to us, which went a long way toward mitigating the superhero fatigue that audiences were starting to experience by then.

While Days of Future Past unites the two cinematic tribes of X-Men, it spends most of its run time in 1973, about a decade after the events of First Class. Its already announced 2016 sequel, X-Men: Apocalypse, is rumored to be set in the 1980s. Maybe we'll find out Michael Milken was a mutant.

Without spoiling things too egregiously, Days of Future Past suggests that the events of the nonperiod X-films may be, how you say, negotiable. It's taking a page from J.J. Abrams' successful relaunch of the Star Trek franchise — a series nearly as old and continuity-dense as the X-Men — by seeming to establish an alternative timeline wherein the stuff that made you angry didn't necessarily happen, but the stuff you loved probably still did. We won't know until a year from now, but the upcoming Terminator: Genesis is rumored to do some internal timeline-monkeying, too, probably to appease (aging) fans who felt the series lost its way after creator James Cameron departed.

But then paradoxes and timeline-monkeying have always been the subject of the Terminator movies. Days of Future Past goes so far as to quote The Terminator outright, saying, "The future is not set." Its plot point about an attempt on the life of a man who is destined to invent a technology with disastrous implications for the future comes not from its comic book antecedent but from Cameron's Terminator 2: Judgment Day. In the comic book, the target of the assassination attempt was a presidential candidate, not an inventor. And the time-traveling X-Man was in fact an X-Woman, Kitty Pryde. She's still in the movie, played by Ellen Page no less, but the mission is reassigned to Wolverine for purely commercial reasons. As fun as First Class was, it grossed less than the other X-movies, and it lacked a certain stabby, Canadian je ne sais quoi.

It wouldn't surprise me a bit if the comic book Days of Future Past was somewhere in the mind of the penniless 27-year-old Cameron as he was writing the screenplay for The Terminator the year after those two X-Men issues were published. In 1990, having firmly established himself as a viable blockbuster filmmaker, Cameron would pitch an X-Men movie for himself to produce and his then-spouse, Kathryn Bigelow, to direct. Later, both Cameron and Bigelow would become Oscar-winning directors, but their proposed X-Men joint, like most superhero movies floated back then, went nowhere. A decade would pass before Singer, the young director who'd put himself on the map with The Usual Suspects, would launch the franchise that he's now returned to course-correct.

Oh, and the dystopian future of the four-color Days of Future Past? It was 2013.