Accessibility links
'Mad Men' Pauses At The Half-Season With A Song And Dance Mad Men ended its half-season on Sunday night with Don Draper wondering, as always, whether he can find peace without lies. 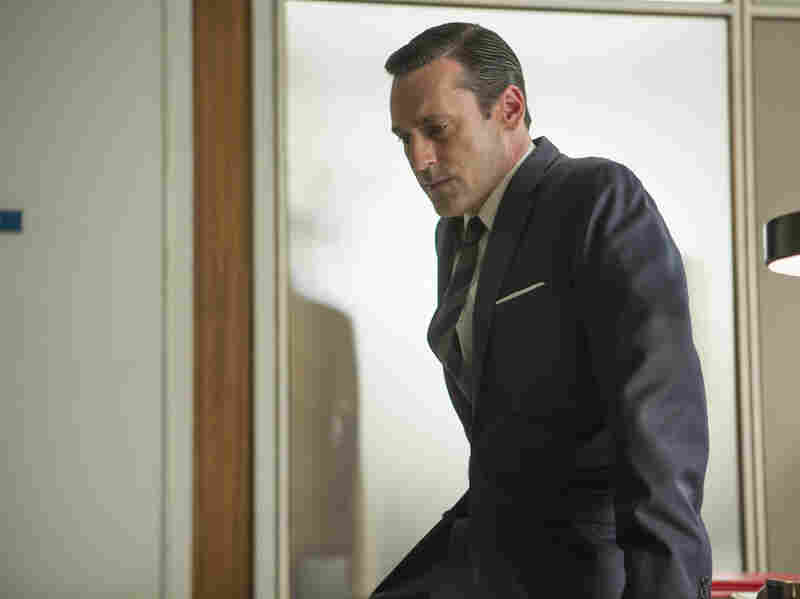 Jon Hamm as Don Draper, who ended the first half of Mad Men's last season in a state of uncertainty — as always. Justina Mintz/AMC hide caption 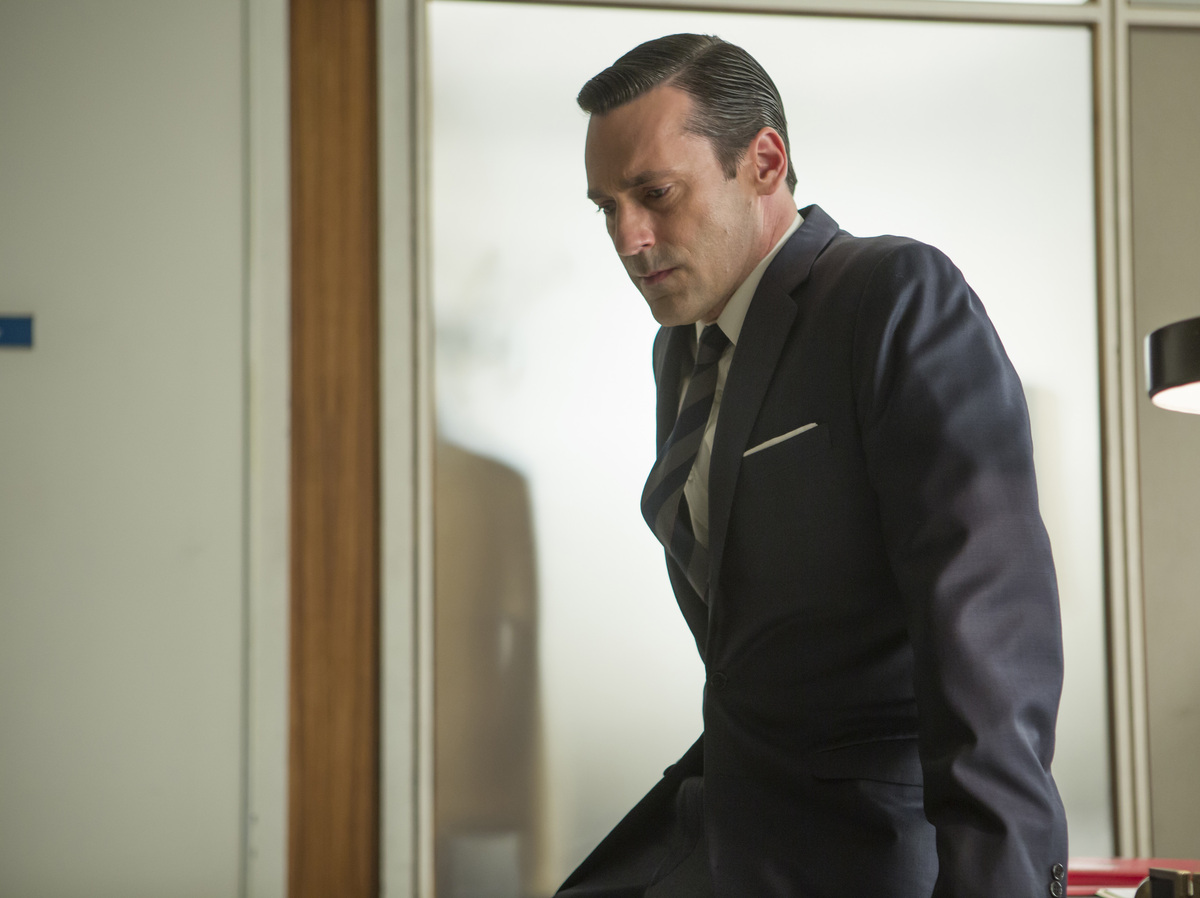 Jon Hamm as Don Draper, who ended the first half of Mad Men's last season in a state of uncertainty — as always.

A death, a divorce, a song and dance number and a sale; must be the end of another Mad Men season.

Creator Matt Weiner has a reputation for ending seasons on a melodramatic note. And even though this year's run of Mad Men episodes was cut in half by AMC to set the series finale next year, Sunday's "Waterloo" still managed to close 2014's seven-episode run with a jolt.

From a dead Bert Cooper crooning about the best things in life to Roger Sterling engineering a sale of the SC&P advertising firm to McCann-Erickson that just might save Don Draper's job, Weiner threatens to toss all his characters in the air just to see where they land next season. Again.

The surprise death of founder Bert Cooper was sad on multiple levels; it removed way cool character actor Robert Morse from the cast, while giving him a dream sequence song and dance number at the episode's end that recalled his early career as a Broadway showman (he starred in, among other things, How to Succeed in Business Without Really Trying). It also gave John Slattery some of his most emotional scenes yet, as his entitled, adrift Roger Sterling found new direction after the death of his mentor/surrogate father.

For me, this half-season stands out by documenting the moments when our hero Don Draper sees most of the lies in his life fall away. His wounded marriage to budding starlet Megan died, not in a showy blizzard of arguments and recrimination, but in the heavy silence of two people who realized it was time to stop pretending.

His mantle of invincibility was stripped away at work. By Sunday's episode, Draper's reputation was so frayed that even Joan Harris — once one of his staunchest supporters and a knowing, kindred spirit of a sort — voted in vain to see him put out on the street.

Even Draper's children learned to see him as he was: not a towering Master of the Universe on Madison Avenue, but a damaged, fearful orphan whose attempts to reinvent himself were often sabotaged by drink, women and a terrible impulse toward self-destruction.

The question, as always with Mad Men, is simple: Now that you know the truth, where do you go from here?

This past season also seemed to be about succession; the way mentors and parents leave an indelible stamp on those who follow them.

Watching Peggy Olson deliver a masterful, sentimental pitch to Burger Chef about how a fast-food joint can become the new dinner table — a telling irony, given how few people actually eat in such restaurants nowadays — it's obvious she has finally become the New Don.

That it happened because Draper stepped aside, insisting that the woman he first hired as a copywriter make the pitch, was a beautiful passing of the torch delivered with Mad Men's typically well-orchestrated understatement.

And on the home front, watching daughter Sally Draper hoist a cigarette in secret, one hand on her hip, warding off insecurity and emotional need with a mix of smoldering anger and trendy, teenage cynicism, the child seemed a perfect blend of her damaged parents. You feel a great swell of pity for a world about to endure the impact of this smart, predatory young woman.

There were many other quality moments in "Waterloo." L.A. Law alum Harry Hamlin has delivered subtle, spot-on work as Jim Cutler — the dryly practical character who became a villain for doing the only sensible thing anyone in a real-life agency would have done with Don Draper: try to fire him.

Cutler's final decision to go along with selling the firm, though it would cost him his job, was delivered with a priceless line: "It's a lot of money." (According to dollartimes.com, the $6 million Pete Campbell expected to earn from the sale in 1969 would be nearly $40 million today.)

And the way in which all the show's characters were glued to the July 20, 1969, moonwalk by Neil Armstrong served as a poignant reminder of the momentous events Americans shared together, across the country, through the TV screen (Cooper's death right after seeing its success was another poignant passing of the guard).

In another masterful poke at modern times, we realize, watching these characters, how much less we are connected by such moments in 2014, despite all the cellphones, television and social media at our disposal.

It may have seemed like a quiet episode, but "Waterloo" was a seismic season-ender for the way in which it positioned all of our favorite characters for a final run toward the 1970s.

And the biggest question remains: Can Don find peace in a life without lies?

You can see the final episode of this season for yourself at AMC's site.