Accessibility links
Not My Job: No Longer 'Clueless,' Alicia Silverstone Gets Quizzed On Parenting If you were a teenager around 1995, prepare to feel old: Silverstone, who played peppy, pampered Cher Horowitz, is now a mother and has written a book about parenting called The Kind Mama. 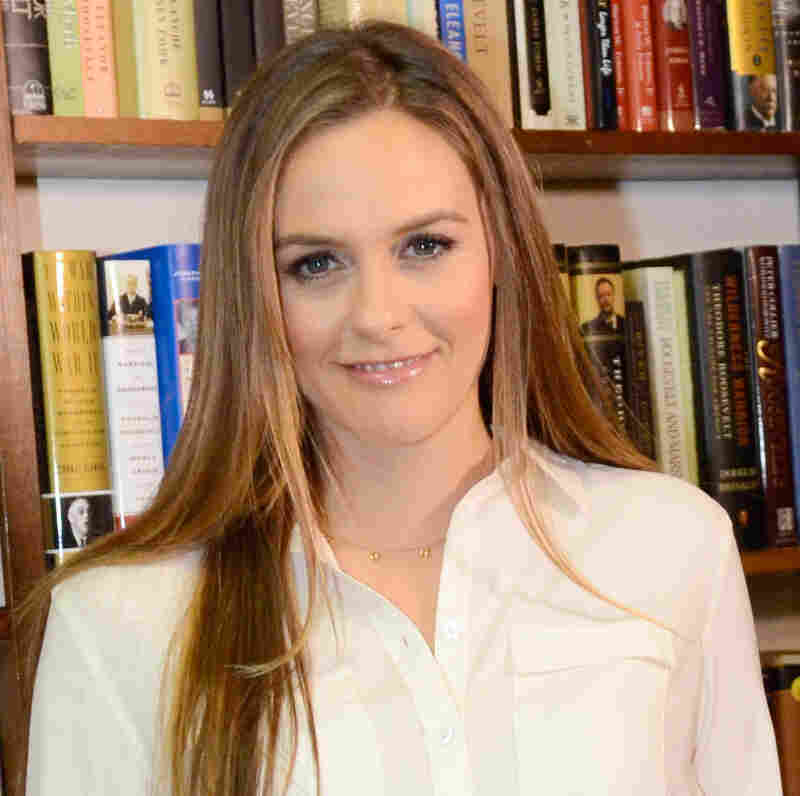 If you were a teenager around 1995 then you probably remember Alicia Silverstone as Cher Horowitz in Clueless -- the world's most peppy, pampered Beverly Hills high schooler. Well, prepare to feel old, because not only is Alicia Silverstone now a mother, but she's written a book about how to be one called The Kind Mama.

We've invited Silverstone to play a game called "Spare the rod, spoil the future best selling memoir." Three questions about parenting advice of the past, as collected in the Slate article "The Worst Baby Advice Ever."

And now the game where we ask people to look back on their long careers and think about how they ended up here. It's called Not My Job. If you were a certain age in 1995, then your favorite movie is probably "Clueless," the story of Cher Horowitz, the world's most cheerful, adorable, wealthy, high school student. Well, prepare to feel old because not only is Alicia Silverstone, who played Cher, now a mother, but she has written a book on how to be a good one. Alicia Silverstone, welcome to WAIT WAIT ...DON'T TELL ME.

ALICIA SILVERSTONE: Thank you. Hi everyone.

SAGAL: Hi. So this is true. I once thought - I have daughters - I once thought about writing a book on how to have daughters. And then I realized that then I would be expected to be the perfect parent for the rest my life. Was this not a concern when you sat down to write a book about parenting?

SILVERSTONE: Well, the book only takes us through the first six months.

SILVERSTONE: So I kind of took myself off the hook there.

SILVERSTONE: This is more a book about another path. And that was a lovely and enjoyable one. So I wanted to put it all together in a guide so that women could have that amazing spirit that they deserve to have.

SAGAL: There are moment where it kind of sucks. Can it...

SAGAL: I mean, are you allowed to scream curses at your husband while you have contractions?

SAGAL: You write in the book, in addition to nutrition and diet and other things, you write about potty training. And you don't believe in diapers.

SILVERSTONE: Well, it's not so much that I don't believe in them. I just really love that there's an option to avoid using them as much as possible. Its called elimination communication. And so basically, you know how your baby tells you when he's hungry and you respond, right?

SILVERSTONE: And you know how he tells you when he's tired, and you respond.

SILVERSTONE: Well, he's also telling you when he has to pee or pooh. He even offers you a little pause right before he has to go. So all you have to do is, you know, look out for that. And, you know, there's cues, there's like timing. So they wake up in the morning, they got to - when you have to pee, they got to pee. You know, and you just kind of try it on a timing thing. And then they also make these little faces.

FELBER: Yeah. I got to tell you, Alicia, I have a 19-month-old daughter. And her signal that she has to pee is peeing.

SAGAL: That's how one knows.

FELBER: She's going to be a good poker player I guess.

SAGAL: It was a long time ago, and you've done many, many movies since then, I know, but I been talking about you to my various friends - particularly people who were teenagers in the '90s. And for them, "Clueless" is - to quote one of them - simply the greatest movie ever made. It was this touch - I watched with a friend of mine who was about that age. And she repeated every one of your lines before you said it, which is terrifying.

SILVERSTONE: I mean, I did actually go to Beverly Hills High School for half a semester.

SILVERSTONE: And so I saw what was happening there. And I had some friends, even from where I grew up in San Mateo, that, you know, had some of the materialism that Cher had. But I really focused on Cher's genuine - she was so serious and so honest about everything in a way that was hilarious, you know. So that's what I would focus on.

SAGAL: Do people expect you to be Cher Horowitz?

SILVERSTONE: I think for a longtime people did, but I think it's pretty clear that I'm not like her at this point. But I think at first, people probably did. I think they were surprised. But, you know, I have moments where I feel like Cher. You know, just now where almost said what are we talking about?

SILVERSTONE: You would have then thought, oh, she's dumb. She can't remember what she's talking about. And then I think, oh, that's so like Cher. Do you know what I'm saying?

SAGAL: Did you have a problem coming out of that 'cause a lot of times it happens a young actors when they make it big in one really huge role everybody wants them to do that same thing. Did you get a lot of offers to be another high school student and another high school student? Or did you try to, like, break out of that mold and do different things as soon as you could?

SILVERSTONE: I think both. I think I was so surprised by what happened. I didn't go in knowing that that would happen. And I was, you know, incredibly proud of the film. And it was all - but it was all very surprising and overwhelming, I should say. And so in ways, I just really focused my energy on other things and became very involved with - you now, I went to the Amazon River with Woody Harrelson, you know. And I did things - I went to Africa.

SAGAL: So let me get this straight. You came out of "Clueless." It was a huge surprise hit. You became a huge movie star. And you were like, what do I do now? I will go to the Amazon with Woody Harrelson.

SILVERSTONE: To save the rainforest, yes.

SILVERSTONE: Well, that was our goal. I don't know...

>>SAGAL You went down there and you did it.

SAGAL: That was awesome.

FELBER: Good for you.

SILVERSTONE: Thank you. I'll take that.

SAGAL: All right, Alicia Silverstone. We have invited you here to play a game we're calling...

SAGAL: You have written a 21st-century parenting book "The Kind Mama." We are going to ask you about some parenting advice of the past as collected in an article on slate.com. Answer two questions correctly, and you'll win our prize for one of our listeners - Carl Kasell's voice on their voicemail. Bill Kurtis, who is Alicia playing for?

SAGAL: So are you ready to do this, Alicia?

SAGAL: Don't be nervous. You're in - you can't show fear 'cause kids can smell fear.

SAGAL: A little parenting advice from me to you. All right. In 19...

FELBER: It looks like they're flirting with you, but they're smelling fear.

SAGAL: In 1962, a pediatrician from Florida named Walter Sackett put out a book on parenting. It is amazing any child from that decade survived. For example, Dr. Sackett - Dr. Sackett advised parents to put infants on strict schedules. Why? Was it A, because it's much more convenient to change diapers if you know when they're going to get filled, B, because, quote, "we are born craving order more than mother's milk," or C, because if you just give them what they want when they want it, babies will become socialists?

SILVERSTONE: So hang on. I need to say which one that he said it was?

SAGAL: That he actually gave this advice for this reason.

SILVERSTONE: I think I'm going to go with C.

SAGAL: You're going to go with C, and you would be right.

SAGAL: That's what he said.

SAGAL: He said, quote - Dr. Sackett said back in '62, "if we teach our offspring to expect everything to be provided on demand, we must admit the possibility that we are sowing the seeds of socialism."

SILVERSTONE: That guy must need a lot of love.

SILVERSTONE: OK. None of them, but what could he say? Wait. Give me the first one again.

SILVERSTONE: OK, then I'm just going to go with B.

SAGAL: He thought by the age of six months, kids - babies could be having black coffee along with their bacon and eggs, which he also suggested for babies.

SAGAL: Honestly, it is - I was born shortly after that. It is amazing I'm alive.

AMY DICKINSON: It is.

SILVERSTONE: Did anybody read this book?

SAGAL: Apparently. It's - I don't know. All right. Last question.

DICKINSON: Right. Hard to light your baby cigarette if you're so jittery.

FELBER: Oh, those training cigarettes. Those are adorable.

SAGAL: Going back - this is going back a few decades. Around the turn of the 20th century, parents were often advised to do what to their newborn babies? A, lick them thoroughly, B, rub them with lard, or C, teach them French?

SILVERSTONE: Who said this?

SAGAL: It was a general bit of parenting advice that could be traced to a number of parenting manuals at the time in the early 20th century, very early.

SILVERSTONE: I'm going to go with B.

SAGAL: You're going to go with B, rub them with lard?

SAGAL: It was thought to be good for the skin.

DICKINSON: It also makes them taste better on a spit.

SAGAL: Bill, how did Alicia Silverstone do on our quiz?

SAGAL: In just a minute, we flex our muscles on the listener limerick challenge. Call 1-888-WAIT-WAIT to join us on the air. Support for NPR comes from NPR stations and Lumber Liquidators, offering a variety of sustainably harvested flooring including prefinished and stained at 1-800-Hardwood. The George Lucas Educational Foundation, creator of Edutopia, a source for what works in education. Learn more at edutopia.org. And Progressive, offering policyholders the option to bundle home and auto insurance coverage. Learn more at progressive.com or 1-800-Progressive. We'll be back in a minute with more of WAIT WAIT ...DON'T TELL ME from NPR.