Accessibility links
Sgt. Bergdahl's Hometown Rejoices At His Long-Awaited Release Bowe Bergdahl spent five years in Taliban captivity; he was released Saturday. He is still weeks away from returning to his hometown of Hailey, Idaho, where residents are celebrating his freedom. 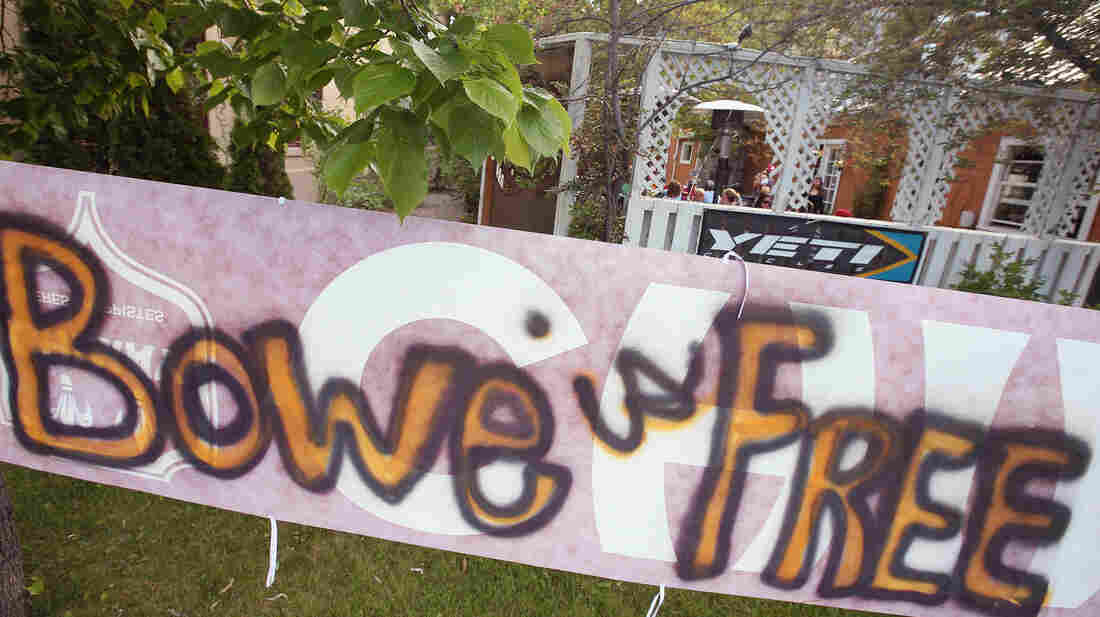 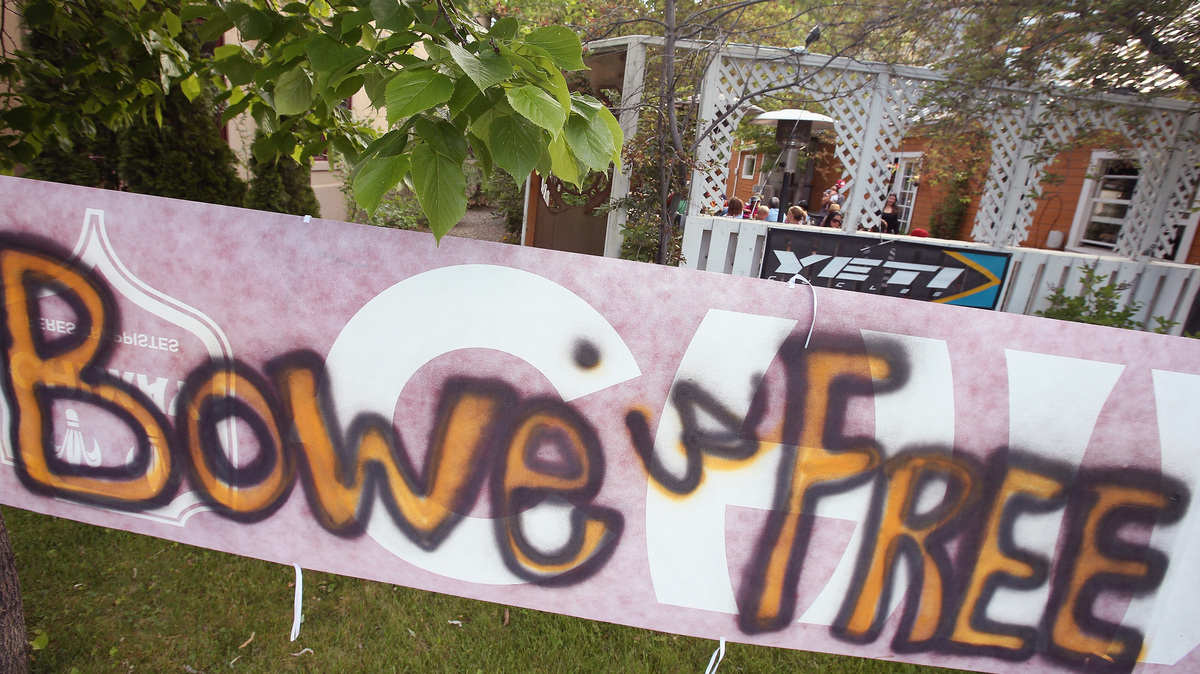 A sign announcing the release of Sgt. Bowe Bergdahl sits outside the Power House restaurant in Hailey, Idaho.

The town of Hailey, Idaho, has waited five years to hear news of Sgt. Bowe Bergdahl's return. In 2009, Bergdahl was captured and held by the Taliban — first in Afghanistan and later, it's believed, in Pakistan.

On Saturday, he was released in a swap for five Guantanamo Bay detainees. Now Hailey, Bergdahl's hometown, is preparing for the next chapter.

On Sunday afternoon, Bob and Jani Bergdahl stood before rows of reporters in an auditorium at Gowen Field in Boise. They had spent the past five years both hoping for and dreading news out of Afghanistan — but finally, the news was good. Jani Bergdahl spoke to her son through the TV cameras: "You've made it," she said. "I imagine you are more patient and compassionate than ever. You are free. Freedom is yours. I will see you soon, my beloved son. I love you, Bowe."

Bob Bergdahl also took this opportunity to speak to his son directly, saying he admired his character and patience during his captivity. "But most of all, I'm proud of how much you wanted to help the Afghan people," he said tearfully, "and what you were willing to do to go to that length." 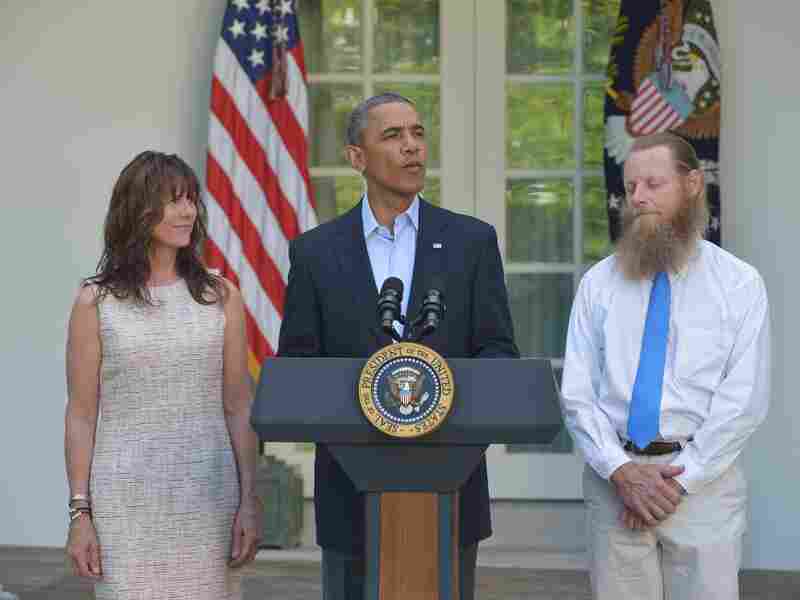 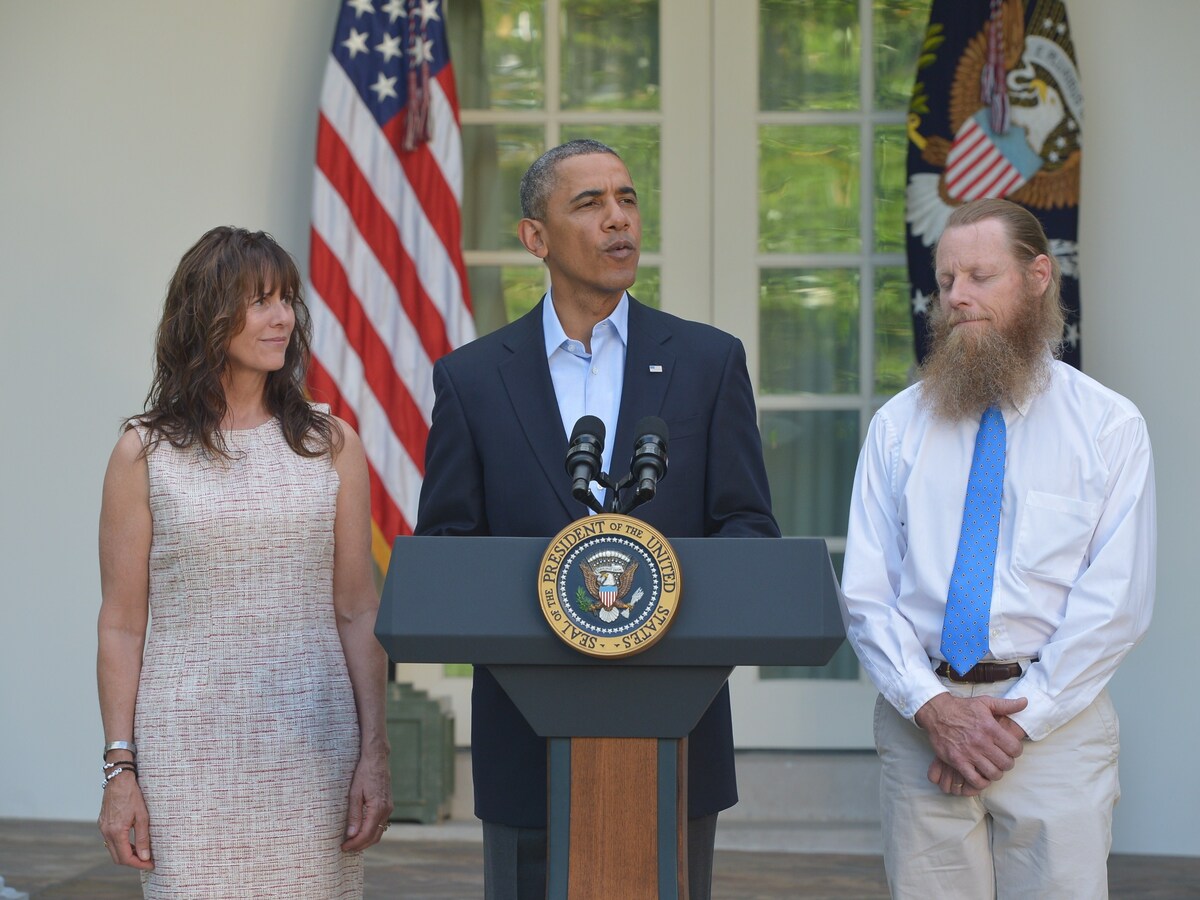 The Bergdahls don't yet know when they'll get a chance to see their son. Right now, he's working with a medical team in Germany on his mental and physical recovery.

From Small-Town Idaho To Taliban Captivity

Bowe Bergdahl grew up down a road that quickly turns to gravel in one of the canyons around Hailey. Around town, he was known for the motorcycle he rebuilt, and for his performance in the Nutcracker ballet. Bergdahl loved to be alone in the mountains, but was also happy just talking to people in town. He was an excellent marksman, say locals. He fenced. He learned to sail.

Friends say Bergdahl also craved a way to do something important in the world — and in 2008, he saw enlisting in the Army as his opportunity.

But about six months into his deployment in Afghanistan, Bergdahl went missing from his base. A few weeks later, he turned up in a Taliban propaganda video.

In the video, Bergdahl says he was captured while lagging behind a patrol. But questions about whether he deserted still linger. In 2012, Rolling Stone published emails between Bergdahl and his father that suggested Bowe was disillusioned by the military's role in Afghanistan.

The details of what happened the day of Bergdahl's disappearance are unclear; the military has always said it will get answers to those questions when Bergdahl returns. The debate over the circumstances of Bergdahl's capture hasn't stopped some veterans groups and POW advocates from rallying around him. Annual rallies for Bergdahl drew hundreds of supporters on motorcycles to the small town.

On Saturday, President Obama announced that Bergdahl's captivity was over. "This morning, I called Bob and Jani Bergdahl and told them that after nearly five years in captivity, their son Bowe is coming home," the president said, adding that the U.S. had agreed to exchange five Taliban detainees at Guantanamo Bay for Bergdahl.

Release Of Sgt. Bergdahl May Have Come At A High Cost

Release Of Sgt. Bergdahl May Have Come At A High Cost

Who Are The Five Guantánamo Detainees Released In Prisoner Swap? May 31, 2014

It was the news that the town of Hailey had been waiting for. Word of Bergdahl's release spread quickly, to a mix of excitement and tears. At a coffee shop along Main Street, Ed Northen said he got the news from a message his neighbors left.

"We got home, listened to our answering machine and they said, 'Oh, we're just celebrating the news — this is so great,' and we went, 'What?' " Northen choked up for a moment and then continued, "We went straight to the computer and went online and started reading what we could."

Northen and his wife, Carmen, attend the same Presbyterian church as the Bergdahls. Carmen Northen is irritated that some members of Congress are criticizing the prisoner exchange. She said that after five years, something needed to be done. "If it was their son, they would do everything," she said. "And to have Bowe home safely is the most important thing."

Bergdahl likely won't return to his hometown for weeks. From Germany, he'll head to Texas to continue the reintegration process.

At the press conference, Bob Bergdahl said it's hard for him and his wife to wait, but that they understand there's a reason for the delay. "Bowe has been gone so long that it's going to be very difficult to come back," he said.

His road will be long and hard — and that's where the Bergdahls say their mission has just begun.