Accessibility links
'Kingfisher' Girls Will Dance Their Way Into Your Heart Genevieve Valentine's new novel, The Girls at the Kingfisher Club, uproots the classic fairy tale of the 12 dancing princesses and replants it in the speakeasies of Prohibition-era New York City.

'Kingfisher' Girls Will Dance Their Way Into Your Heart

'Kingfisher' Girls Will Dance Their Way Into Your Heart 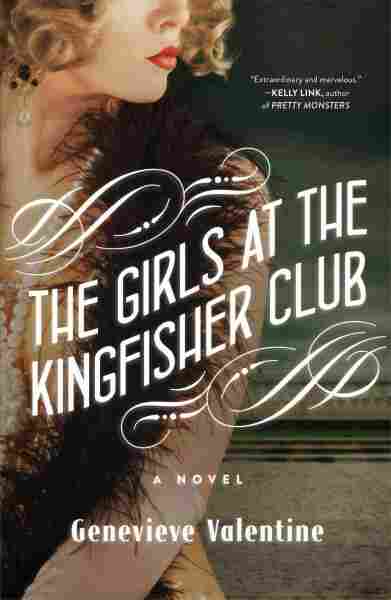 The Girls at the Kingfisher Club

Title
The Girls at the Kingfisher Club
Author
Genevieve Valentine

I'm completely confident in stating, without an ounce of hyperbole, that this is the best fairy tale retelling I've ever read.

I don't say this lightly. I've lived and breathed fairy tales for as long as I can remember. Fairy tales were an alphabet for me, and subversive retellings were the language in which I found my favorite poems, short fiction and novels. And Genevieve Valentine's The Girls at the Kingfisher Club, in setting "The 12 Dancing Princesses" in Prohibition-era New York, uses this language to sing jazz standards and teach me the Charleston.

Jo Hamilton is the eldest of 12 sisters born hardly a year apart, including two sets of twins. Their tightfisted father keeps them hidden out of sight on the upper floors of his townhouse, embarrassed by the dozen living reminders of his inability to sire an heir and further his place in society. As the girls grow, he withdraws more and more support from them, expecting the elder daughters to look after the younger until they're all of an age to be discreetly married off.

Jo looks after her sisters by teaching them to dance and taking them out to speakeasies behind their father's back.

The beating heart of this book is a love of dance and a love of sisters. Every single one of them — Jo, Lou, Doris, Ella, Hattie, Mattie, Rebecca, Araminta, Sophie, Lily, Rose, Violet — is a fully realized character with her own favorite dance, favorite dress, favorite sister. They fight and tease and chafe against each other as sisters do, but the love thrumming through them is constant and breathtaking, all the more so for being so confined. But even more than the characters, their voices or the sharp, quiet slicing of the understated prose, what I loved about this book was its own tense dance with its source materials.

I'm hard-put to think of a time period that better captures the essence of fairy tale transgression than 1920s New York; the contrast between the stately stasis of a respectable house and the wild, desperate abandon of the speakeasy is the perfect stage on which to turn the original story on its head. In the story I read as a child, the princesses were malicious tricksters, drugging their suitors to preserve their secret at the cost of their suitors' lives. For the Hamilton girls, however, dancing at night is the means to surviving their days.

Jo's father is, functionally, both patriarch and patriarchy: an unseen, controlling presence that makes women police each other to enable and ease their separation and subjugation. But this is not reductive allegory; it's a clear, unflinching depiction of invisible forms of abuse. Jo struggles with this, throughout the book: wondering whether she is jailer as well as jailed, nicknamed "The General" by her sisters for the ruthless efficiency with which she moves them from house to club and back. Her self-imposed constraints and the impossible responsibility she shoulders are tangible and heartbreaking, and I loved her completely for them.

I loved, too, the subtlety with which Valentine draws out the social dynamics of the period. The speakeasy of popular imagination (and novels of the period) is dangerous to women, a place of promiscuity and sexual threat, while hearth and home are meant to be safe and virtuous. But the girls who go to the Kingfisher Club expect drinks and cab fares from men as a matter of course, with no strings attached; Joseph Hamilton, on the other hand, expects his daughters to be biddable chattel in exchange for the $4 a month he provides them. In Valentine's world, the speakeasy — where everyone breaks society's rules together — is where women have the agency, consideration and support one expects from family; the family house is where they're reduced to saleable goods.

There is so much more I want to say about this book: about the ways in which women protect and support each other; about the way they feel like antidotes to The Great Gatsby's brittle ciphers; about the pitch-perfect dialogue; about the dancing. I can't stop re-reading this book for the dancing and the fierce, scalding love the sisters have for it.

"The 12 Dancing Princesses" was one of my very first fairy tales, buried in a battered hardcover edition of The Random House Book of Fairy Tales from 1985. It stuck with me because I was aware of not reading it as I was meant to; I was rooting for the wicked princesses. I wanted them to keep on dancing their way through their subterranean magic land of diamond trees and princely boatmen, and couldn't see any reason why they shouldn't.

I'm profoundly grateful to find that I wasn't alone in that view.