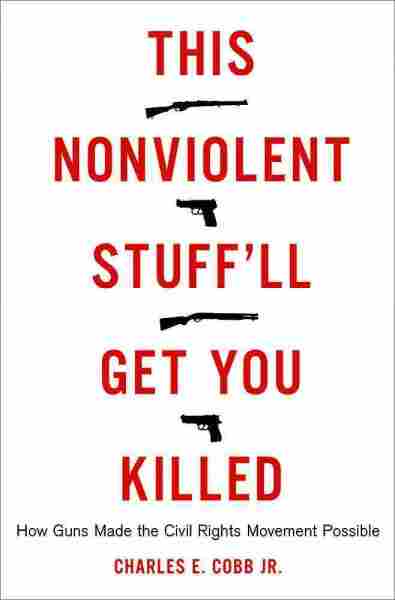 This Nonviolent Stuff'll Get You Killed

How Guns Made the Civil Rights Movement Possible

This year marks the 50th anniversary of many pivotal events in the civil rights movement, and to commemorate "Freedom Summer," Tell Me More is diving into books that explore that theme.

One of the cornerstones of the civil rights movement was non-violent resistance. During lunch counter sit-ins and protest marches Martin Luther King Jr. and other civil rights leaders instructed participants not to take up arms. Instead, when violence erupted or force was used to disrupt their activities, people would non-violently resist attempts by law enforcement to end the protest.

But this passive resistance did not necessarily mean an unwillingness to use force to protect themselves from violence in other circumstances.

This hiding in plain sight story is recounted to NPR's Michel Martin by author, professor and former Student Nonviolent Coordinating Committee field secretary Charles E. Cobb Jr. in his new book, This Nonviolent Stuff'll Get You Killed: How Guns Made the Civil Rights Movement Possible.

On the role of guns in the movement...

I'm very much concerned with how the history of the southern freedom movement or civil rights movement is portrayed. And, I'm very conscious of the gaps in the history, and one important gap in the history, in the portrayal of the movement, is the role of guns in the movement. I worked in the South, I lived with families in the South. There was never a family I stayed with that didn't have a gun. I know from personal experience and the experiences of others, that guns kept people alive, kept communities safe and all you have to do to understand this is simply think of black people as human beings and they're gonna respond to terrorism the way anybody else would. ...The southern freedom movement has become so defined, the narrative of the movement has become so defined by non-violence that anything presented outside that narrative framework really isn't paid that much attention to. I like the quip that Julian Bond made...that really the way the public understands the civil rights movement can be boiled down to one sentence: Rosa sat down, Martin stood up, then the white folks saw the light and saved the day.

If you look at the early period of his leadership in the civil rights movement, particularly the period of the Montgomery Bus Boycott, his household, as one person noted, was an arsenal, with guns all over the place. William Worthy, who was a journalist...tried to sit down in an armchair in Martin King's house and was warned by Bayard Rustin, who was with him, that he was about to sit down on a couple of guns. King was a man of the South, after all, and he responded to terrorism, he responded to violence the way most people in the South would be inclined to respond. So when the Klan...bombed his house in 1956, he went to the sheriff's office and applied for a gun permit to carry a concealed weapon. Now, he didn't get the permit...but Martin King always acknowledged — if you read his writings — the right to self-defense, armed self-defense.

On why we need to know this history...

It helps you understand participants in the movement as human beings. ...One of my problems with the way the history is portrayed is the people involved are held up as some extraordinary almost angelic kind of group of people, and what really needs to be understood is that they're ordinary people, ordinary human beings, they have the contradictions of anybody else, even Martin Luther King. Then people understand — people today — understand the people of the 1950s [and] the 1960s more completely as human beings.