Accessibility links
'Expecto Patronum!' How Themed Weddings Are Sweeping The Nation Combining your love for Harry Potter and Game of Thrones could make for one memorable day, and strangely dressed characters are increasingly storming marriage ceremonies across America. 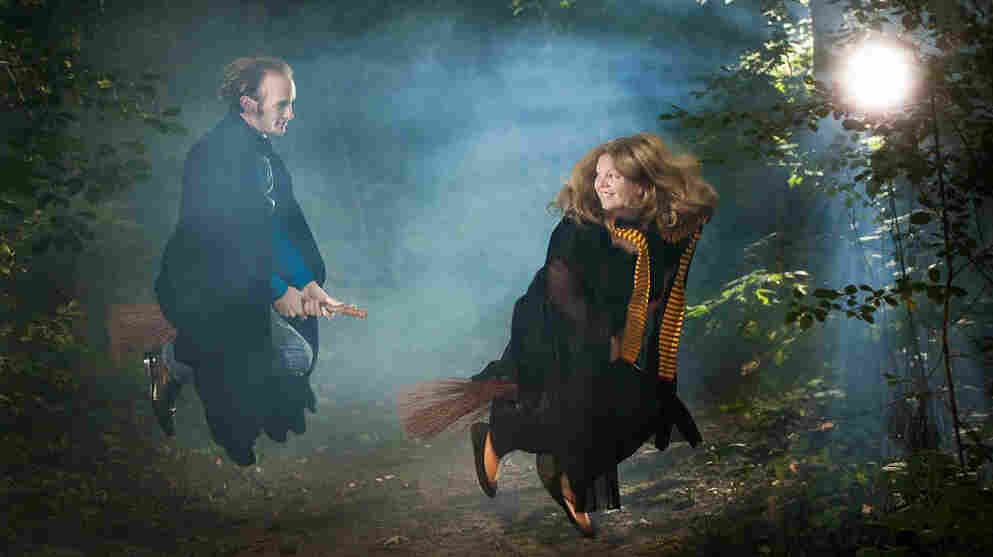 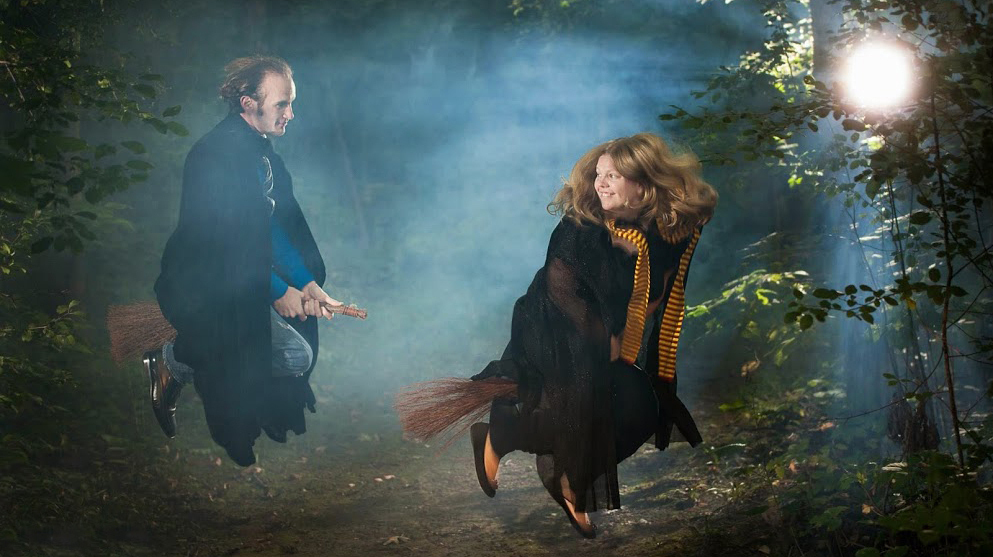 When Hermione got married, she ditched her black robes for a white Renaissance gown and parked her Nimbus 2000 next to her groom's broom. She was radiant, enjoyed a few too many of Bertie Bott's Every Flavour Beans and thought the Dementor, who sat as quiet as death at the Sorting Hat table, was "awesome." Hermione could have incanted "Orchideous!" had she been in the mood for flowers, but she had other things on her mind that day.

"I really wasn't up to casting spells. I was so nervous — I felt sick to my stomach," admits Brianna "Hermione" Wurtsmith, a 28-year-old blond muggle. Her nerves long settled, Wurtsmith may yearn for a Time-Turner so she can revisit her Harry Potter-themed wedding, which took place last year in Ann Arbor, Mich. Wurtsmith is part of a growing army of fantasy fans embracing themed weddings.

Like the Lord of the Rings' Rohirrim overrunning the Orcs at Helm's Deep, strangely dressed characters are storming marriage ceremonies across America. Based on personal accounts, social media buzz and reports from wedding planners, legions of Harry Potter, Games of Thrones and Lord of the Rings fans are streaming down the aisle — in character. 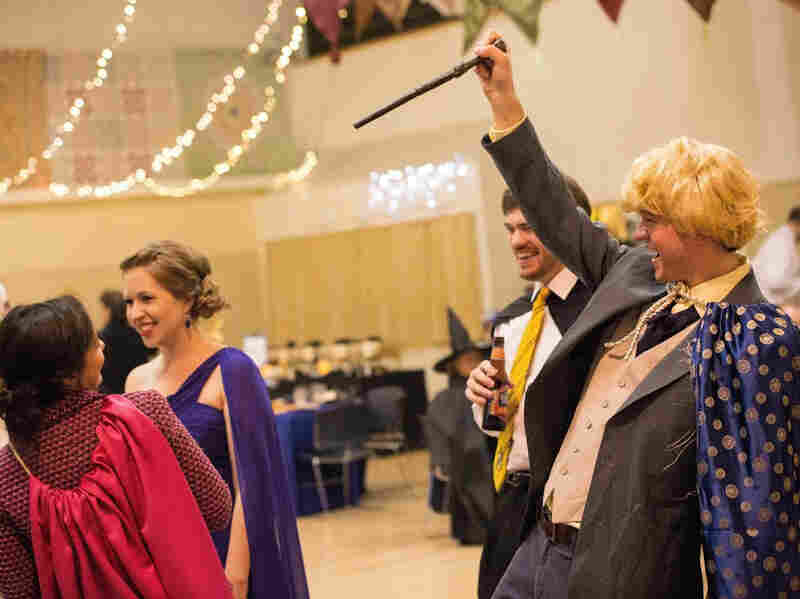 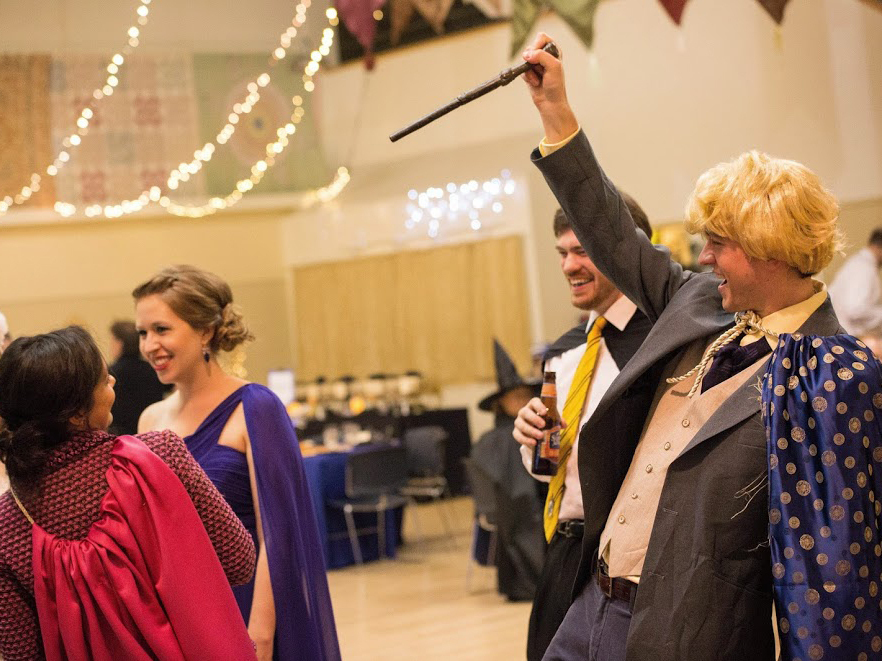 "Kids who grew up on Harry Potter and are watching Game of Thrones are incorporating characters that inspire them in weddings," said Richard Markel, spokesperson for the Association for Wedding Professionals International. While wedding planners report the popularity of themed ceremonies in several cities, Markel believes the movement is strongest on the West Coast, in the shadow of Hollywood and all things fantastical.

Ed Spencer, of First Day Entertainment in Pensacola, Fla., says as much as 20 percent of his wedding business now involves themes, with the top choice being Game of Thrones. "High fantasy" weddings started taking off nearly two years ago and are heading into the mainstream as couples emboldened by nerd culture and inspired by movies want anything but "cookie-cutter weddings," he says. However, Spencer warns couples not to let the gravitas of the event be overshadowed by a theme. "It's a fine balance," he adds.

Many believe the trend is more than a mere blip on a wedding planner's agenda, or the coming of age of the Potter generation. It's as epic a change as the archetypal tales to which the couples are paying homage. To them, these rituals signal not only nerd liberation, but also the power of visual technology and those who worship creativity and eccentricity.

"We're here and we're weird, and we're proud of it," says Jason VandenBerghe, creative director of video game developer Ubisoft and a devoted student of the psychology of fantasy play. "We're finally out of the closet."

VandenBerghe has been to a Lord of the Rings wedding in Seattle, witnessed vows inside San Francisco's annual Game Developer Conference and even attended medieval wedding rites. He married his bride, Lisa — whom he met at a Renaissance faire — in medieval clothing and had figures of Han Solo and Princess Leia atop their wedding cake.

It made perfect sense to him to dress as they did. "When the one you love shares your passion, you feel powerful enough to make the internal external, and declare who you are before witnesses," Vandenberghe explains. "There's nothing more profoundly romantic."

"Hermione" Wurtsmith may have "felt like an outcast in high school," but says she journeyed far through fantasy before getting married. It was "so liberating to revel in something I'm passionate about with the people I love," she says of her wedding.

For Chicago wedding videographer Jaysin Osterkamp, who created an elaborate Harry Potter proposal with riddles for girlfriend Andrea Tyler, themed rituals mix the wonder of childhood with love and adventure that "makes the world magic."

Many aficionados consider Napster co-founder Sean Parker's $10 million Lord of the Rings extravaganza among the redwoods in Big Sur, Calif., the ultimate fantasy wedding. But Parker was viciously attacked in the media — he was even dubbed "High Elf of the Redwoods" — for the event's excess and significant environmental damage, claims he vehemently denied.

Parker threw a "big fat nerd wedding" because he and his wife are "devotees of 'high fantasy,'" he explained in an impassioned 10,000-word defense. He extolled fantasy as a way to explore "archetypal human themes with a strong moral compass. Good and evil. Power and responsibility."

That strikes a chord with Wurtsmith. "You imagine yourself in a world where anything can happen, and you have the potential to do so much good," she says.

At least that's what she imagined on the day of her fairytale wedding.

Then it was back to reality. Even for Hermione.

Mary Papenfuss is a veteran journalist of New York, San Francisco and Paris who has worked for the New York Daily News, Salon, Newser, People and Associated Press. Find her at MaryPapenfuss.com.