Accessibility links
In Booming San Jose, Businesses Settle Into A Minimum Wage Hike Since an increase in 2013, the minimum wage in San Jose is now one of California's highest. Some businesses have thrived in the past year, but for others, it's a more complicated picture. 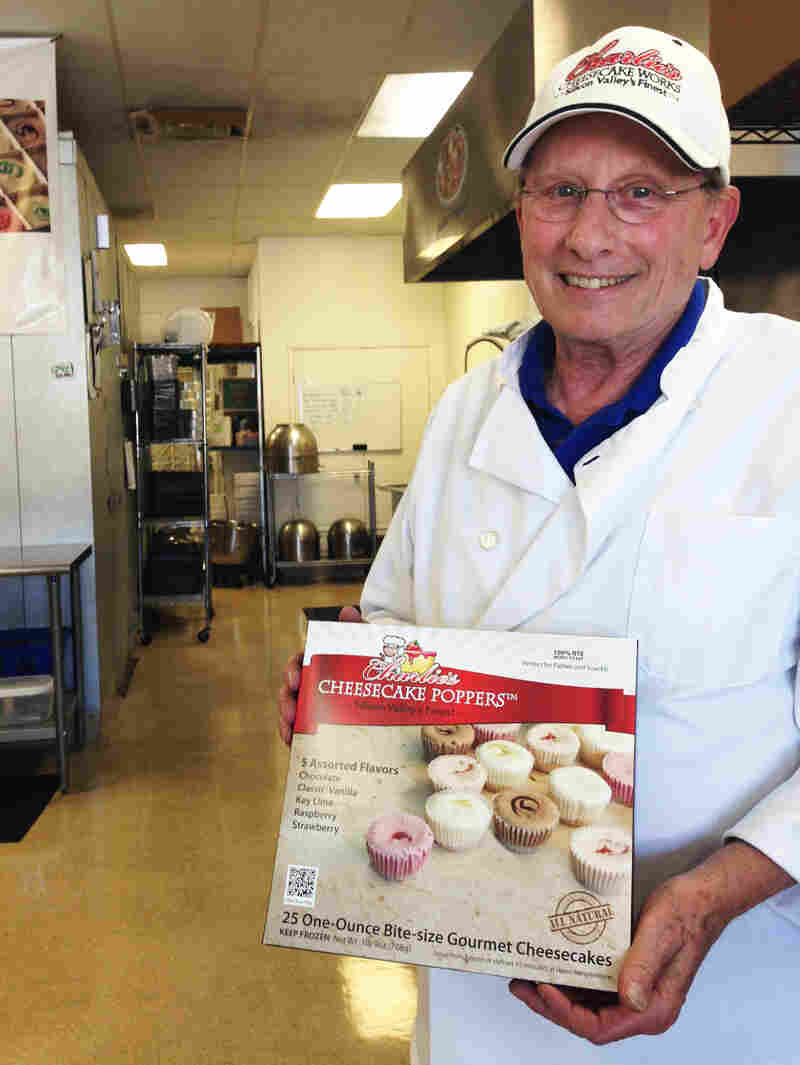 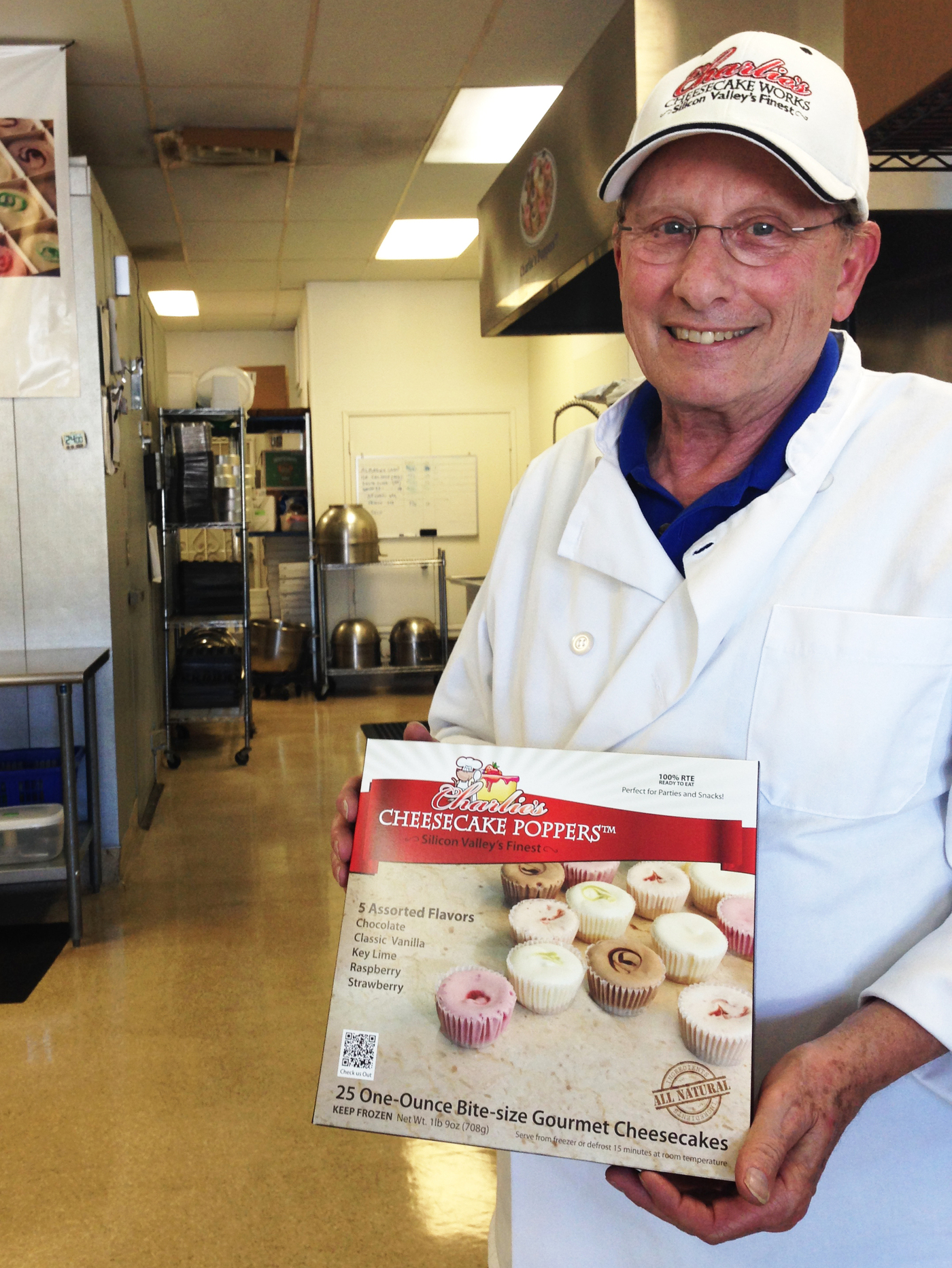 Charlie Major, owner of Charlie's Cheesecake Works in San Jose., Calif., raised prices slightly when the city increased the minimum wage. He says he saw a 7 percent drop in retail sales after the increase.

It's been a little more than a year since San Jose, Calif., increased the city's minimum wage by $2 per hour, with adjustments for inflation. Now at $10.15 an hour, it's one of the state's highest.

Back in 2012, as voters were debating the wage hike, some in the restaurant and hospitality industry warned that an increase would be bad for the sector. It would deter new businesses from opening, they said, and would cause existing businesses to slash hours for employees.

So how are San Jose's businesses faring today? The answer is, it depends.

The vast majority of the 17,000 minimum wage jobs in the city are in the food service and hospitality sectors. After the wage increase, the Pizza My Heart restaurant raised its prices by about 5 percent.

Just a block from San Jose State University, Pizza My Heart gets heavy foot traffic, with a line out the door on most days. The restaurant does brisk business; about 50 pizzas come out of its brick oven every hour.

Like many business owners in downtown, Chuck Hammers fought the ballot initiative and braced for the worst when the law took effect last March.

"There's that little bit of a panic from a business owner, you know, 'Is the sky going to fall?' " Hammers says. "And you're nervous. It's a 20 percent increase in what's really one of your biggest costs" — labor.

"After looking at it, I kind of stepped back and realized, well, it's gonna happen to everyone," Hammers says. "It's going to be a fair playing field. We just need to increase prices a little bit."

So he did. Slices went up by 25 cents, pies by $1. Sales held steady, and Hammers says customers didn't seem to notice.

Hammers owns 24 Pizza My Heart shops. Only four shops are in San Jose, but he decided to raise everyone's wages at all of his stores. Otherwise, he says, he was worried he'd lose workers at his franchises outside the city, where the minimum wage is lower.

"The employees like it, they're sticking around longer," Hammers says. "We're getting very little turnover now in employees, which is really good."

In fact, Hammers is opening more Pizza My Hearts. He still bristles at the suggestion that he's a booster of raising the minimum wage. But at the same time, Hammers says he understands that it's almost impossible to live on $8 an hour in a city where the average two-bedroom apartment goes for more than $2,000 a month. 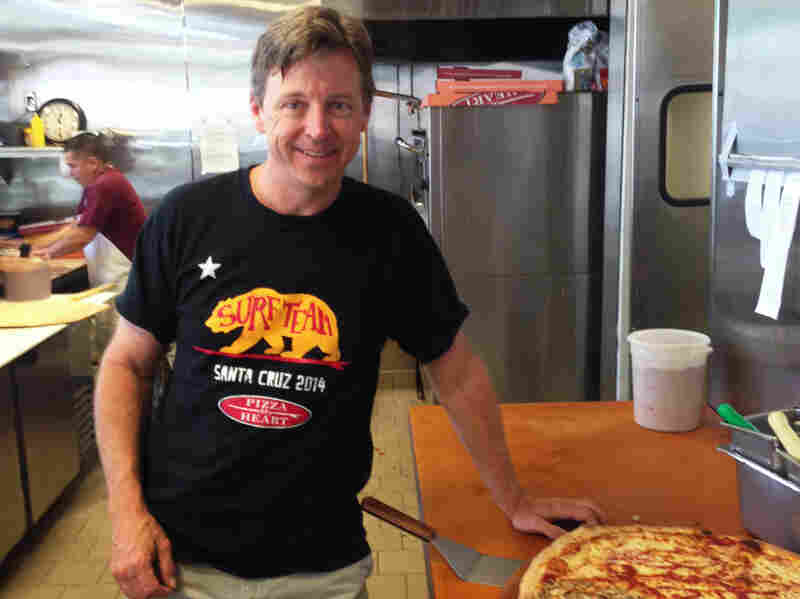 Chuck Hammers, owner of Pizza My Heart in San Jose, Calif., raised prices on slices by 25 cents and pies by about $1 after the minimum wage increase, and says he hasn't experienced a drop in business. Kirk Siegler/NPR hide caption 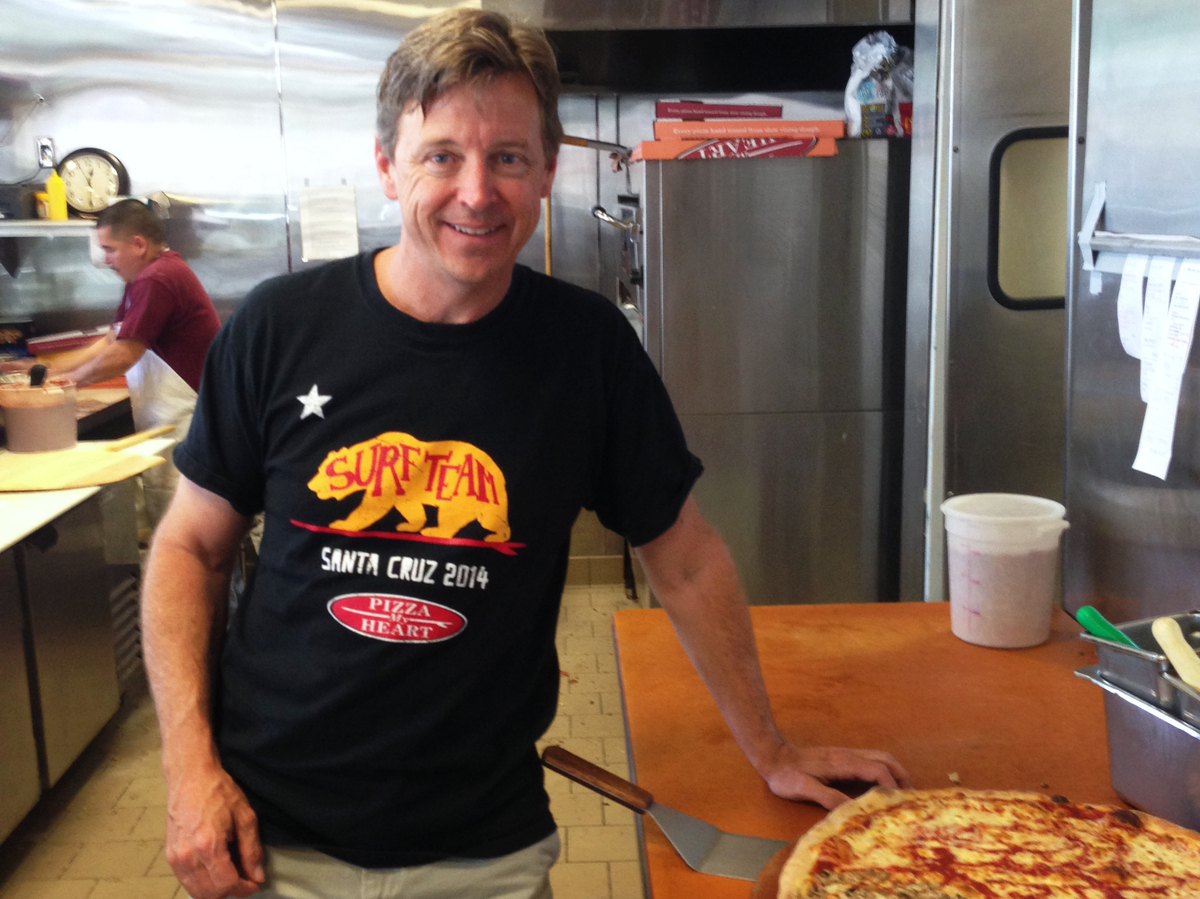 Chuck Hammers, owner of Pizza My Heart in San Jose, Calif., raised prices on slices by 25 cents and pies by about $1 after the minimum wage increase, and says he hasn't experienced a drop in business.

A Squeeze For Some Small Businesses

In a strip mall on San Jose's southern city limits, Charlie's Cheesecake Works is a lot smaller than Pizza My Heart. It has only four employees, including owner Charlie Major. Major pays one employee minimum wage and the others slightly more.

Around the time that the wage increase took effect, his sous chef got another job and moved on.

"I did not replace her," Major says. "I decided that, in light of what was going on with the change and stuff, just until we saw how it really played out, I can do the job that she did, so that's what I've done."

Major, like Hammers at Pizza My Heart, also raised his prices, by about 5 percent. Most of his products are sold wholesale to the local Costco and Whole Foods, but at this store, he makes his profits from walk-up customers who come in to buy a cake or a couple of boxes of his popular "cheesecake mini poppers."

After 23 Years, Your Waiter Is Ready For A Raise

Since the law took effect, profits in the store have dropped by 7 percent, Major says — a big enough hit that he has actually shelved plans to expand the space. Now, he's actively thinking about selling or retiring if things don't get better in the next year.

"It hits small business right where it hurts," Major says of the wage increase. "And if you want to encourage small business, it's tough."

Michael Reich, an economist at the University of California, Berkeley who runs the Institute for Research on Labor and Employment, is very interested in what happens when cities and counties raise the minimum wage.

"A lot of employers are afraid about this ahead of time, because they know they can't raise their [prices] when their competitors do not," Reich says. "But here you have a policy that affects all the restaurants simultaneously."

Reich recognizes that it's a little easier for a larger business like Pizza My Heart to absorb a minimum wage increase than a Charlie's Cheesecake Works. Overall, though, he says the city is doing fine.

Reich crunched his latest numbers for restaurants in San Jose and found that, across the board, operating costs rose by about one-quarter of 1 percent in the past year, and prices for customers rose a little under 1 percent, on average.

"The basic story is the sky didn't fall," he says. "San Jose is still doing well."

Then again, Reich points to Albuquerque, N.M., a city with a long-struggling economy. A recent minimum wage hike there appears to have had little effect on businesses so far, he says.

As the wage increases play out in Albuquerque and San Jose, economists like Reich are about to get a lot more data to study. Dozens of cities and counties across the country are now considering, or are poised to pass, minimum wage increases.