Accessibility links
A Bone Collector's Basement Of Animal Skulls Sees The Light Ray Bandar's skeletons aren't in his closet — they're in his basement. The naturalist has 7,000 animal skulls in his collection, and some are now on view at the California Academy of Sciences. 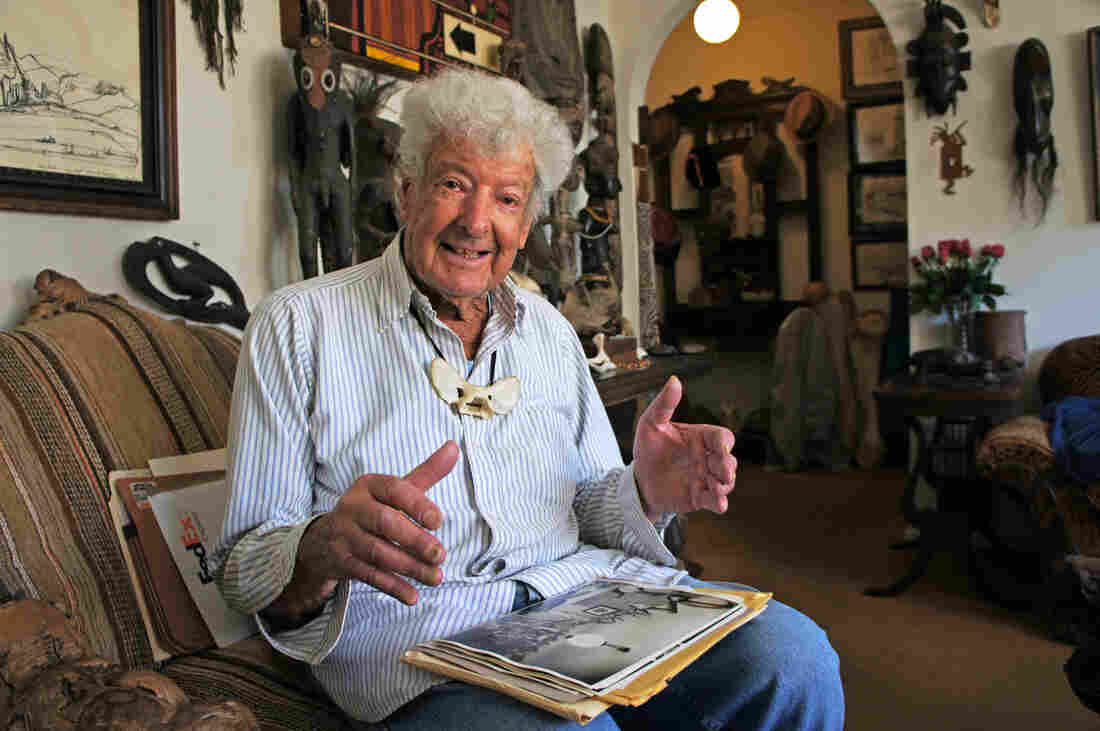 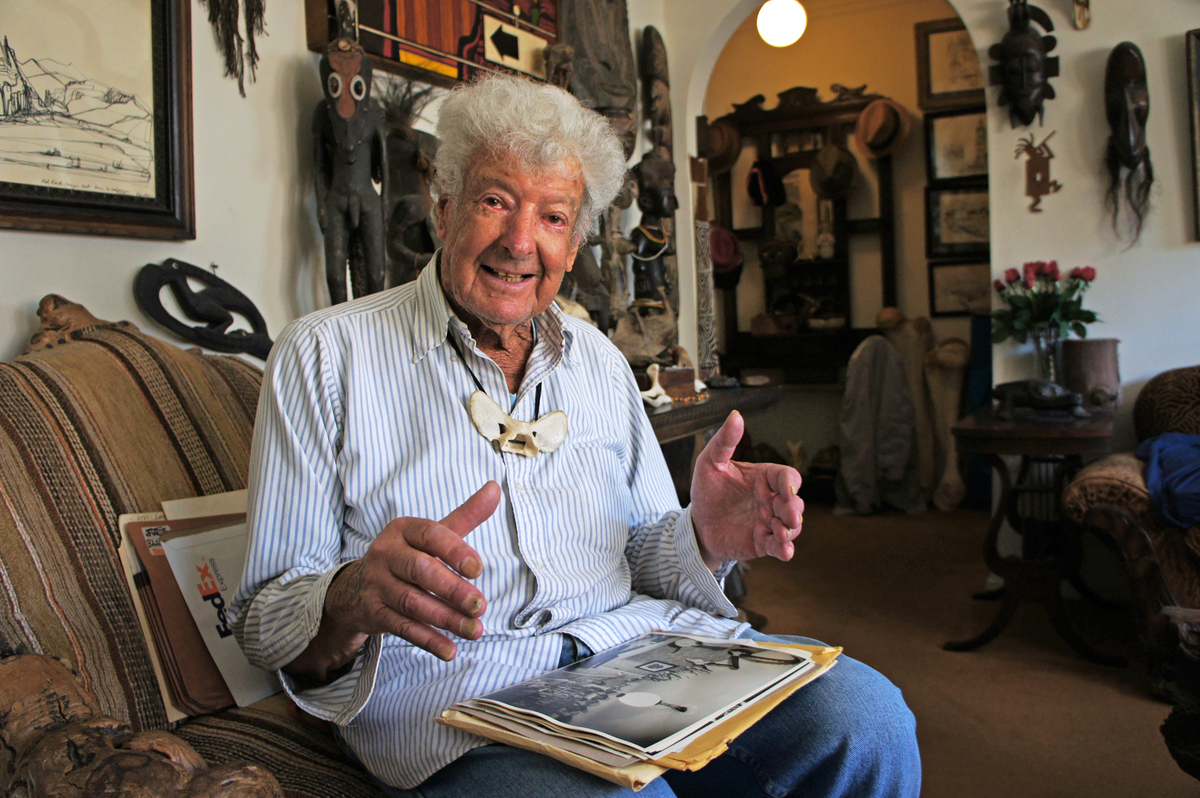 Ray Bandar's skeletons aren't in his closet — they're in his basement. Lots of them. Specifically, 7,000 skulls stacked floor to ceiling, including those of sea lions, cheetahs, jaguars, horses, zebras and other animals.

Bandar has spent 60 years building this scientific collection of animal bones. Now, many of his skulls are on view at the California Academy of Sciences in San Francisco, which has just opened an exhibit featuring his work.

Bandar is a spritely 86 and has an encyclopedic knowledge of these bones. He spent most of his life searching California beaches for dead seals and sea lions. First, he'd decapitate them, which he's authorized to do with a scientific collection permit from the state. The more exotic animals came from local zoos after the animals died. Then, he'd clean their skulls.

"I remove as much flesh as possible. Put them in bucket of water, put them in a warm spot," Bandar says. "Leave it to sit there for weeks and bacterial action removes all the organic material."

He collected his first skull in his 20s, dragging the head of a harbor seal back to his parents' house on public transportation. He would boil the skull in a big pot to get the meat off, he says. 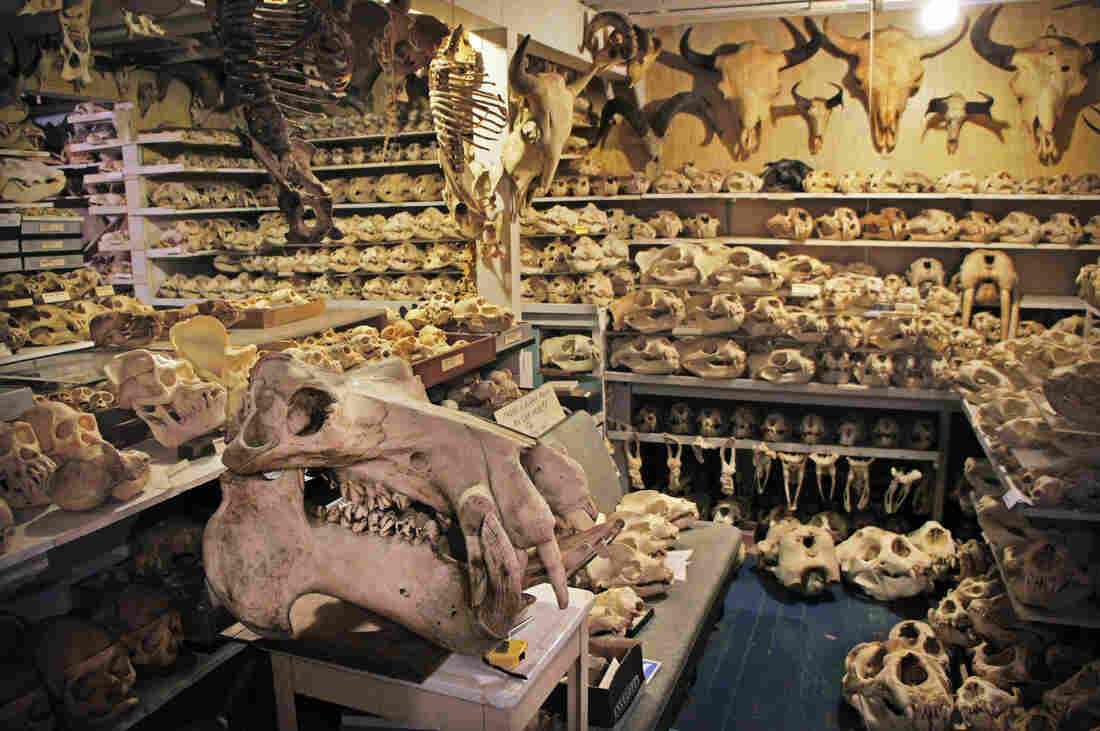 Ray Bandar keeps his skull collection in his San Francisco basement. Some are now on view at the California Academy of Sciences, and eventually he will donate all 7,000 skulls to the academy. Lauren Sommer/KQED hide caption 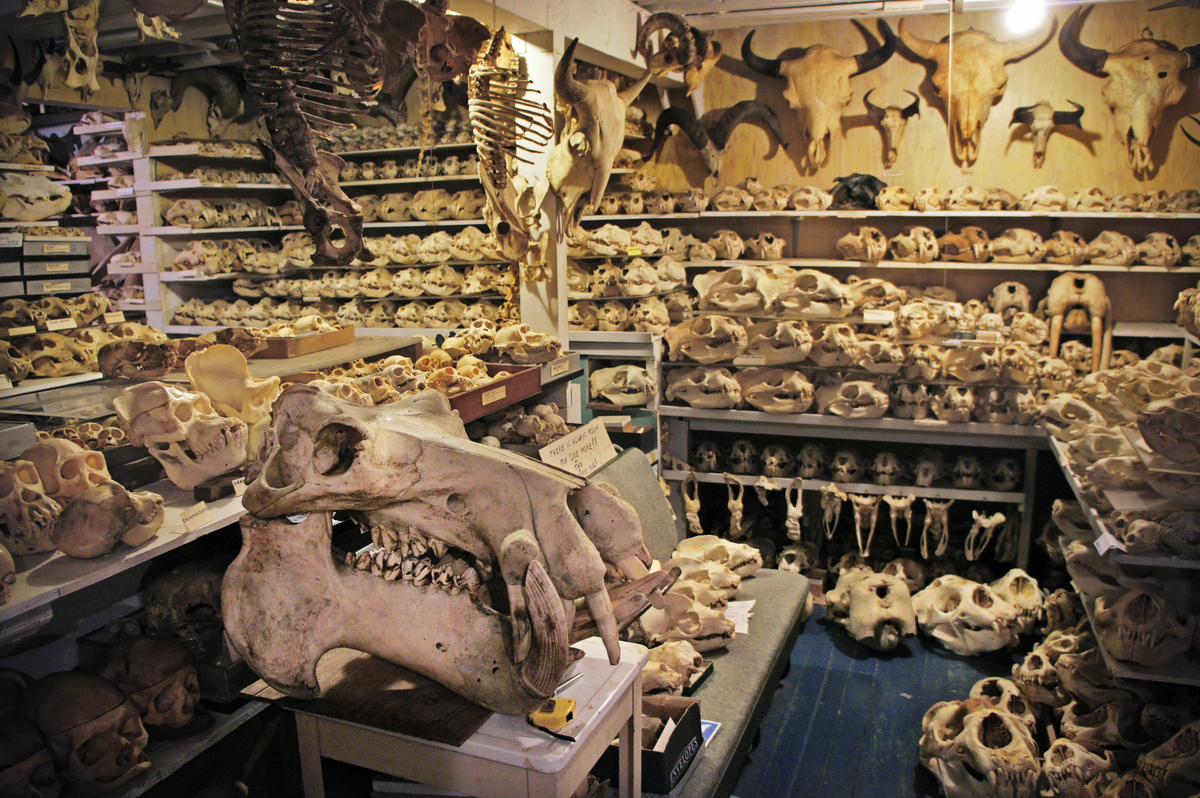 Ray Bandar keeps his skull collection in his San Francisco basement. Some are now on view at the California Academy of Sciences, and eventually he will donate all 7,000 skulls to the academy.

"Boy, did it stink up the house," Bandar says. "When my parents came home, they weren't too happy about that."

Beachgoers would often crowd around Bandar as he collected. Other times, they were less enthusiastic, like when he was working on a 14-foot elephant seal carcass on the beach in front of the Ritz-Carlton. The way he tells it, it made quite a scene.

"I'm sitting on his neck, cutting away, trying to sever the skull from the torso," Bandar says. "I turn around, and standing on the beach is three cops."

They'd received a number of phone calls. More than one of the callers thought he was a homeless man trying to eat the seal.

Bandar sees these bones as pieces of art. When his entire skull collection is eventually donated to the California Academy of Sciences, it will make up a fifth of the museum's collection.

At the museum, Curatorial Assistant Sue Pemberton pulls a harbor seal skull out of a large bucket of water in the specimen preparation room.

"Smells like the worst outhouse you can ever be in," Pemberton says. "But that's how it works. Everything kind of breaks down."

These skulls show the health of marine mammals, whether they were sick and what they ate, Pemberton says. She pulls out a sea otter skull; this one is a little less fleshy.

"You can see what color the teeth are: bright purple, like the color of grape juice," Pemberton points out. That's because this otter ate purple sea urchins, which stained its teeth.

Pemberton heads out to the beach anytime a dead animal is reported, and her work has actually helped change policy. After she found dead whales that had been killed by ship strikes, federal officials put in new speed limits for cargo ships off the coast.

"It's not pleasant by any stretch," she says. "But to know that it's actually helping with the conservation and protection of all the whales that come after that, it makes all really worthwhile."

Pemberton's collection, along with Bandar's, will be studied by scientists for decades to come. For now, the public can catch a glimpse at the new exhibit in California.