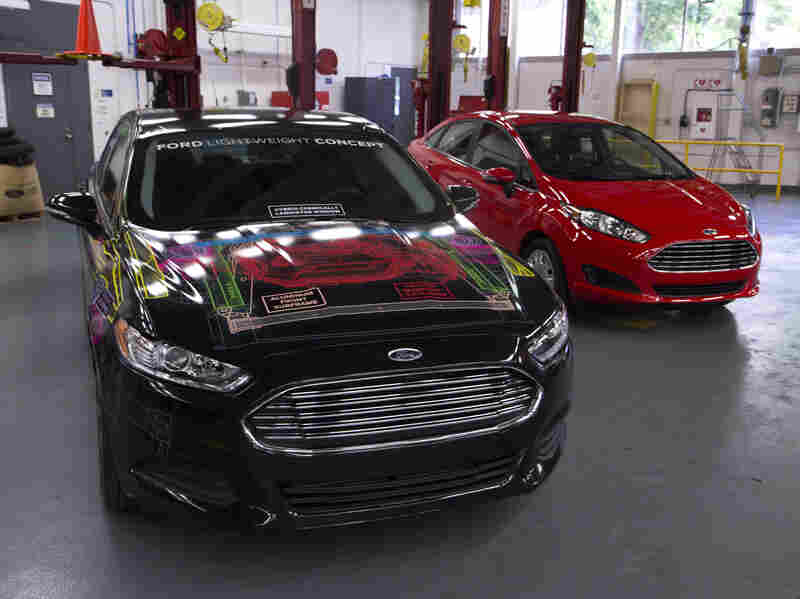 Ford says it cut the weight of its concept Fusion (left) by nearly 25 percent, matching the weight of a Ford Fiesta (right). Ford hide caption 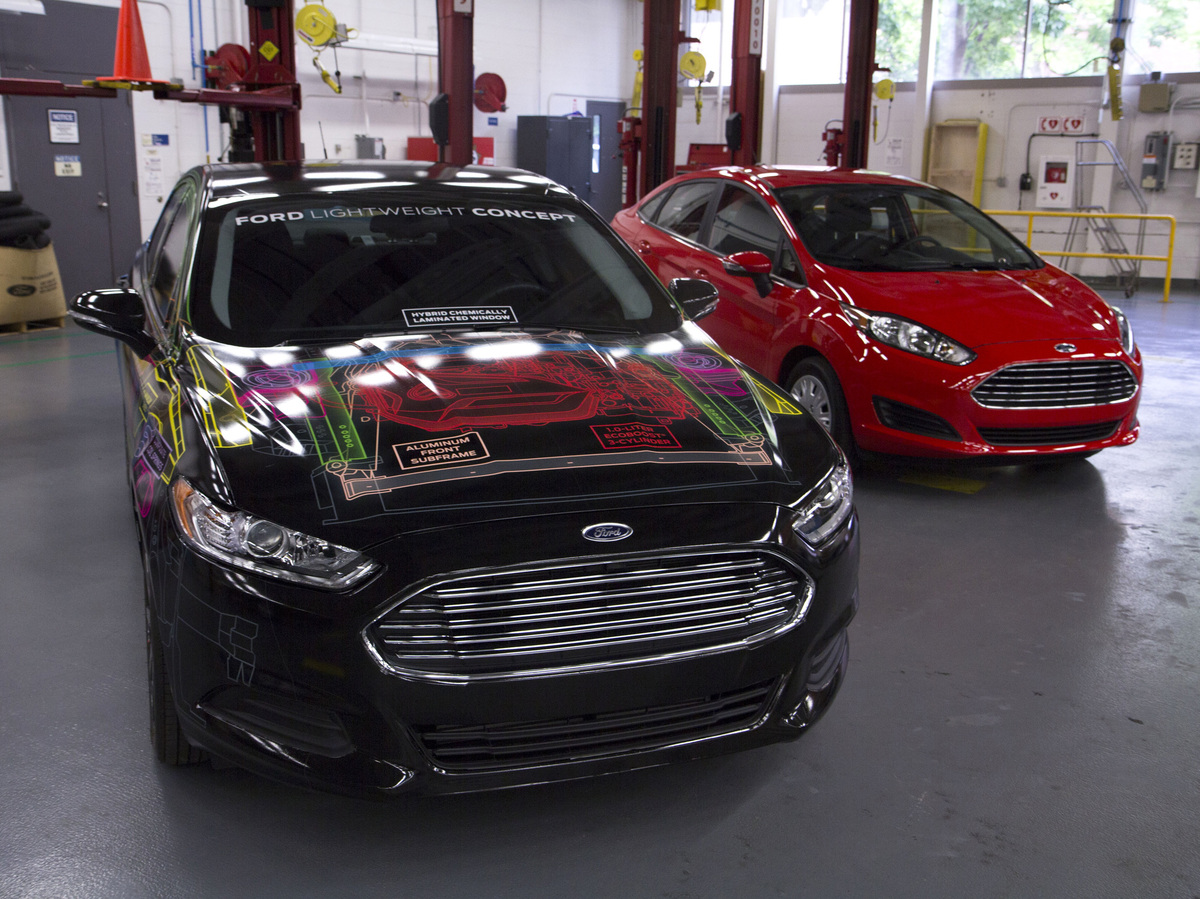 The car industry is required to raise the average fuel efficiency of its vehicles to 54.5 miles a gallon by 2025. But consumers have been reluctant to adopt hybrid technology that'll get the industry there quicker.

That means the car companies have to find other ways to get fuel savings.

If you were to guess, how important would you say fuel economy is to the car business? How much of the research and development is going into making cars more efficient?

Margaret Wooldridge, a mechanical engineering professor at the University of Michigan, has a pretty good educated guess: "I think all the churn is on fuel economy and the rest is window dressing to make sure [automakers] maintain or expand market share."

That's what car manufactures say: Fuel economy is right up there with safety.

So, how hard is it to make cars more fuel efficient? A Honda Civic from 1984 got 47 miles a gallon. Achieving a few more miles per gallon can't be that hard, right?

"If your only condition was build me a vehicle for 55 miles a gallon ... two snaps we could have it done," Wooldridge says.

"But, now design me that vehicle that's attractive, that has all the safety features, that [has] all the creature comforts that we've come to love and expect — my navigation systems, plug in my phone, power heating ... of my steering wheel," Wooldridge says. "So all of those comforts add more and more constraints and more and more burdens that make this harder and harder."

A lot of attention is being paid to the kind of fuel your car is running on or whether you plug it in. But only about 3.5 percent of cars sold this year were hybrids.

Wooldridge says carmakers have to look at every strategy — make cars more aerodynamic, improve the engines and simply make the cars lighter.

"It's intuitive," she says. "You reduce the amount of material or you change it to something that's a lower density that can perform the same function. [That's] easy for us to say — a lot harder for us to do."

That harder part is taking a lot of money and research.

Matt Zaluzec gave me a tour of Ford Motor Co.'s Research and Innovation Center in Dearborn, Mich. Researchers here are finding ways to make vehicles lighter — every part of the car — using every material you can imagine. 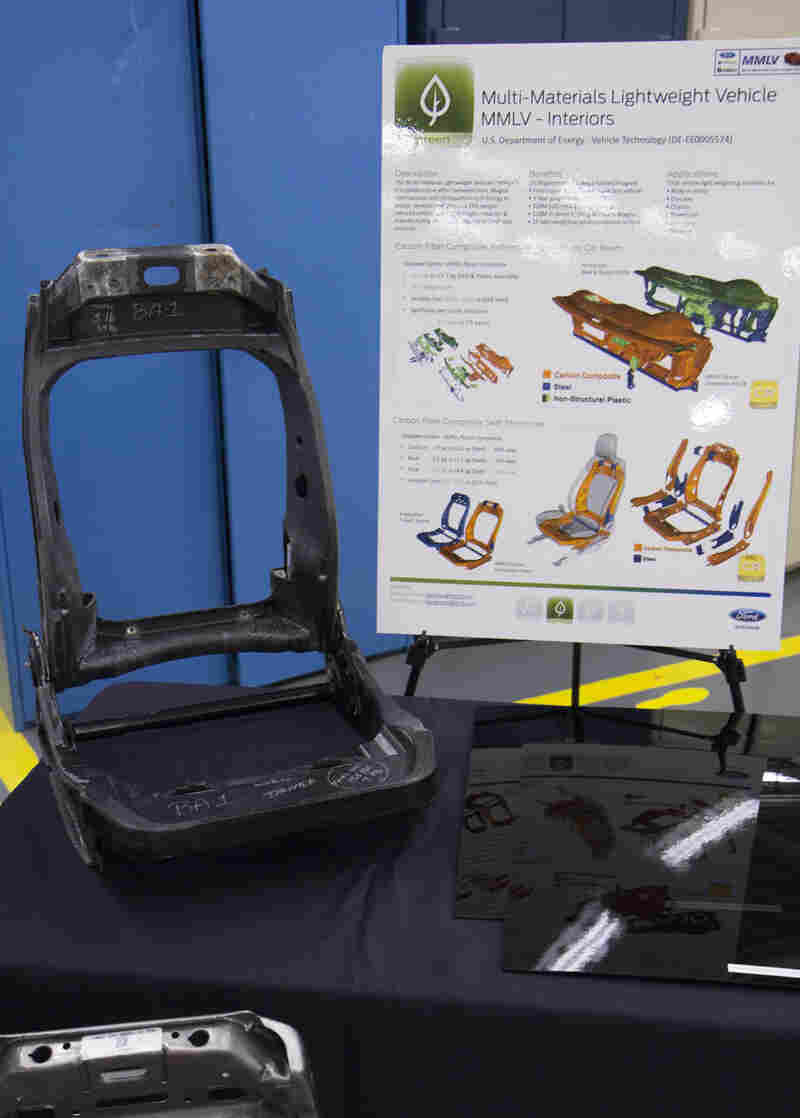 Ford says it was able to reduce the weight of interior components of the concept car, including this carbon fiber seat, by 35 percent. Ford hide caption 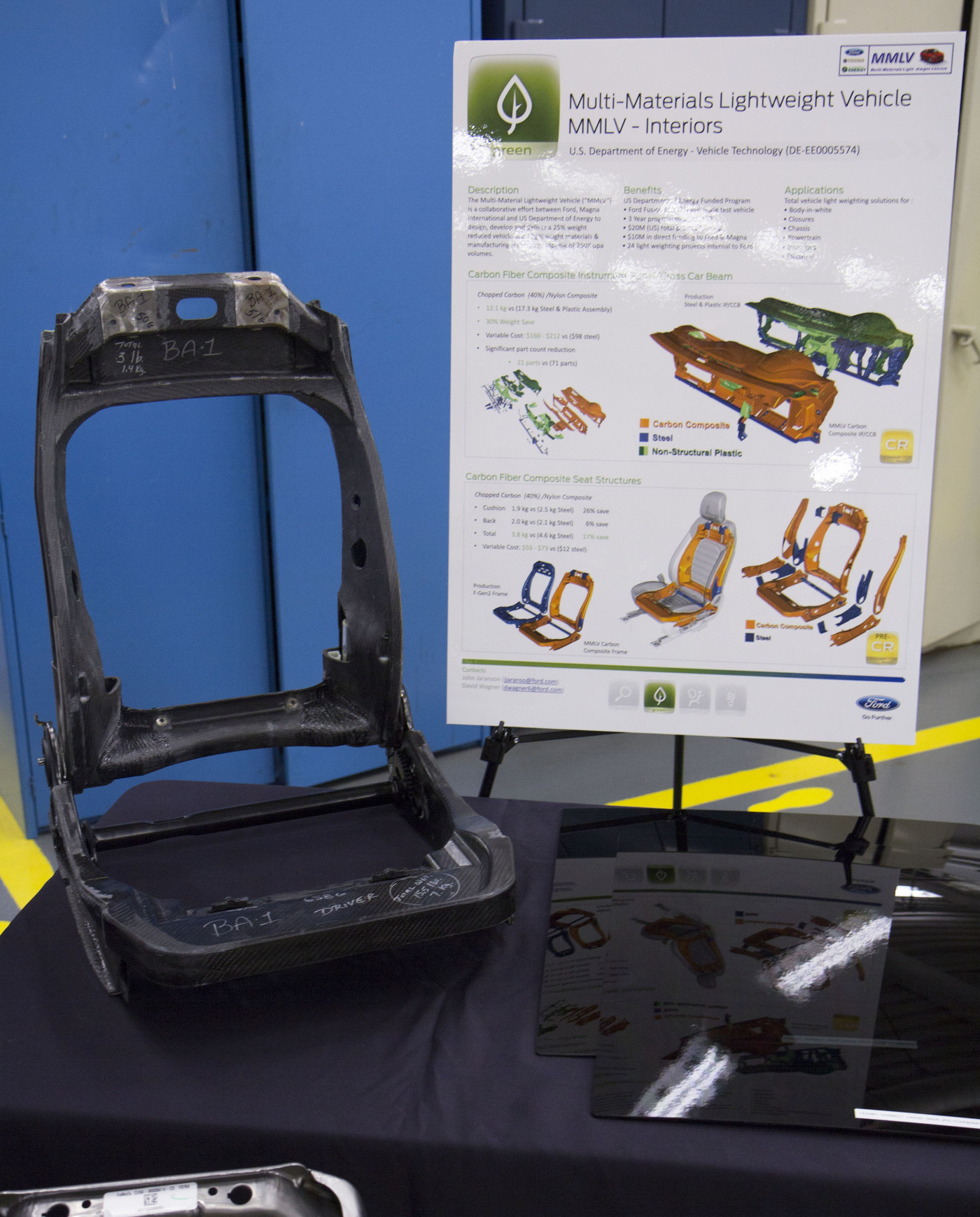 Ford says it was able to reduce the weight of interior components of the concept car, including this carbon fiber seat, by 35 percent.

Zaluzec picks up a what looks like a plastic car part. "This is chopped up money," he says. "Money is not paper. It's actually a fiber." The researchers here are chopping up money discarded by the U.S. Treasury and putting it into plastics as a strengthening material, he says.

Zaluzec was on a team that built a lighter-weight version of the Ford Fusion, a midsize sedan that's the same weight as a Ford Fiesta, a subcompact that's about 800 pounds lighter.

They got money from the Department of Energy.

The idea is to test how much weight they can take out and to start using what they learn right way. The push is to find not just new materials but new ways of using old materials. For example, using aluminum and putting additives in steel to make the car stronger and lighter.

"The combination of materials — of steel, aluminum, magnesium and composites — for every part of the vehicle: the body, the closures, the chassis, the powertrain, the interior," Zaluzec says. "To me, that's a huge step. We've never done this level of material and manufacturing process integration in my 25-year career."

Zaluzec and Dave Wagner, another Ford engineer, say there's a quiet revolution going on in the auto industry.

"We don't want [customers] to say, 'Wow, I'm going to get into a vehicle and it's got this material all over it,' " Zaluzec says.

Wagner notes that the Ford F-150 pickup has had aluminum hoods for more than 10 years. "But no one comes up to me and thanks me for putting an aluminum hood on their F-150. They just know," he says.

Zaluzec and Wagner say they're not expecting any thanks. Actually, they hope you don't notice.