Accessibility links
Book Review: 'The Girl With All The Gifts' By M.R. Carey Ten-year-old Melanie, the star of M.R. Carey's new novel, doesn't know why she needs armed guards and restraints. But readers will find out soon enough, in this grotesque yet grimly hopeful thriller. 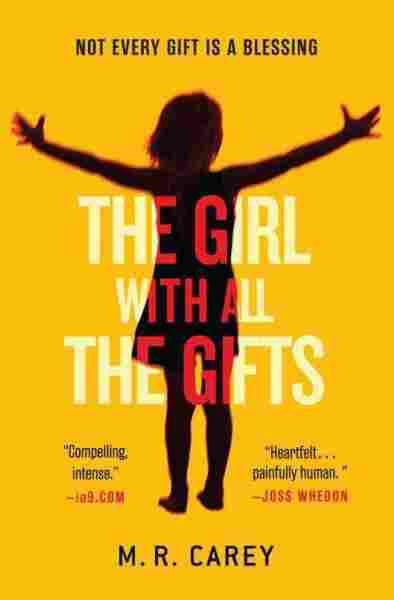 The Girl With All the Gifts

Title
The Girl With All the Gifts
Author
M. R. Carey

Zombies, those perpetual-motion machines of horror, are enjoying a renaissance. It's not hard to see why; in uncertain times, zombies offer the perfect pandemic backdrop for social and political upheaval amid encroaching terror — whether you're Team Slow or Team Fast (don't tell anyone from Team Slow if you're Team Fast — you don't have time for that lecture). But a zombie is never just a zombie. Traditionally, their proscribed, nearly mythic fate makes them a go-to metaphor for lost causes. Recently, however, a new narrative has sprung up, denying they're a lost cause at all.

In The Girl with All the Gifts, 10-year-old Melanie needs armed escorts to her lessons in an underground bunker. She doesn't know why, and for the adults around her — conflicted teacher Miss Justineau, hardliner Sgt. Parks and researcher Caroline Caldwell — there's not much point explaining the kids are experimental cases, examining the fungal spore that turns the infected into "hungries." But of course, this is a zombie story: The experiment will be blown wide open, a motley crew will be hurled into a road trip fraught with danger, and the horizon will be filled with tough decisions.

Author M.R. Carey, who has worked for years in comics, fully knows the power of some nice, gooey zombie imagery, and there's plenty of it to be found here; It's hard to tell which carries the biggest gross-out factor — the queasy descriptions of faces veiled with gray spores or the anomalous, uncanny mannerisms of the infected. But the story's primary concern isn't getting its ensemble out of Dodge alive so much as it is the examination of what it means to survive this epidemic in the first place.

The characters bring their doctrines with them, ranging from stubborn empathy to kill-'em-all militarism, and every decision becomes a fractal of ideals. Some of these arcs feel more preordained than others, but even then, Carey allows for conflict within consistency: Dr. Caldwell is unwaveringly intent on the pursuit of a cure and willing to sacrifice anything (including Melanie), which positions her as both friend and foe, often within the same sentence.

Occasionally, the book seems to trip over itself in its race to get ahead of the genre pack. In particular, Carey succumbs to the fate of many an adult author attempting to voice a precociously otherworldly child, and the tone of Melanie's point-of-view chapters veers occasionally and abruptly in one direction or the other. But there's enough weight given to the moments of individual choice to balance the camera-ready action scenes.

The Girl with All the Gifts is grotesque and grimly hopeful by turns, underscored by lovingly detailed infection in both metaphorical and very literal terms: Spores and hopelessness are equally contagious. It's the creeping inevitability of many a zombie story, with which this book is right at home.

Genevieve Valentine is the author of Mechanique: A Tale of the Circus Tresaulti. Her latest book is The Girls at the Kingfisher Club.

Read an excerpt of The Girl With All the Gifts