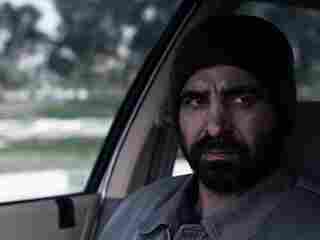 One of the uncredited members of the cast of Manuscripts Don't Burn. Kino Lorber hide caption

Iranian writer-director Mohammad Rasoulof is known for such lovely yet elusive allegories as White Meadows, but his response to being barred from filmmaking has not been to recede further into symbolism. His Manuscripts Don't Burn, smuggled out of Iran last year, is direct and unflinching.

Rasoulof and fellow director Jafar Panahi were arrested in 2010, and forbidden from making movies for 20 years. Both have defied the edict, but where Panahi's post-ban work has been personal and housebound, Manuscripts is a political thriller made in the open — albeit with a cast and crew who worked anonymously.

The scenario is apparently based on the "Chain Murders" of the late 1990s, in which more than 80 Iranian intellectuals and activists were slain by government security forces. There are a few clues that Rasoulof has shifted the story to a more recent time, notably a scene in which a rebellious novelist and a discouraged poet discuss the value of resistance while drinking forbidden vodka.

Opposition is pointless, says the poet; Iranian youth love Steve Jobs, not Che Guevara. That observation sets the movie in the iPhone era, and also demonstrates that Iranian and American consumer cultures are not so far apart.

Although there are a few references to Islam, the movie depicts a paranoid regime that's more xenophobic than religious. The archvillain refers to liberal-minded Iranians as a "cultural NATO," and tells one that "you sold yourself to foreigners." If such jibes recall the official paranoia of the Warsaw Pact era, that's apt: The movie takes its title from The Master and Margarita, Mikhail Bulgakov's satire of life in the Soviet Union. With a few alterations, it could be relocated to the East Germany of The Lives of Others.

Manuscripts follows two government thugs, Khosrow and Morteza, as they seek multiple copies of an unpublished book. The author survived a failed attempt to kill nearly two dozen writers, and has written an account of the incident. The government security bureau wants all the copies destroyed; if a few of the people who possess them are also erased, that would a bonus.

The movie's style is mostly naturalistic. Khosrow and Morteza are low-level enforcers who seldom question their assignments, although the former is a little distracted by the fact that he hasn't gotten paid yet. He has a young son who needs medical care, and the hospital wants payment upfront.

Little time is devoted to torture and killing, but those activities are portrayed candidly. The government agents are technicians, capable of dispassionate cruelty and always prepared to improvise — as one seemingly offhand moment with a clothes pin reveals.

As is common in Iranian cinema, the action involves a lot of driving and walking around, often photographed in long takes from a discreet distance. Notable scenes are filmed through a beaded partition or a curtain of trees, emphasizing the viewer's separation from the events. What these men do can be watched, but not understood.

The director permits himself a few poetic touches. Some dialogue shifts between speech and thought and back again. A brief nightmare suggests that Khosrow is haunted by his work. And the movie's structure turns out to trickier than it initially appears, so that the enigmatic opening sequence is ultimately explained.

While this may be Rasoulof's most straightforward effort, it's not modeled on Hollywood political thrillers in which sensation trumps story. Manuscripts Don't Burn is more rueful than action-packed, yet it simmers with righteous refusal. That's what gives the movie a power no Bourne flick will ever match.