Accessibility links
It's A Summer Sequel Spectacular With 'Dragon' And 'Jump Street' There are 16 movie sequels coming out this summer. Critic Bob Mondello singles out two that handle sequel-hood in vastly different (but successful) ways: How to Train Your Dragon 2 and 22 Jump Street. 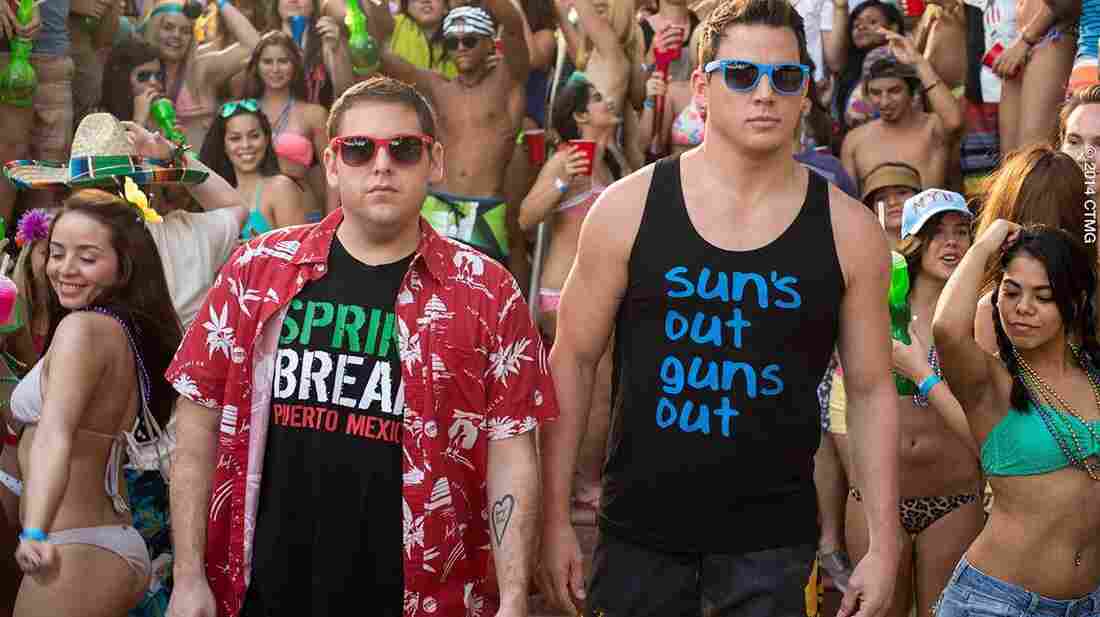 Jonah Hill and Channing Tatum age out of high school in a Jump Street sequel that doesn't mess with its successful formula. Sony Pictures hide caption 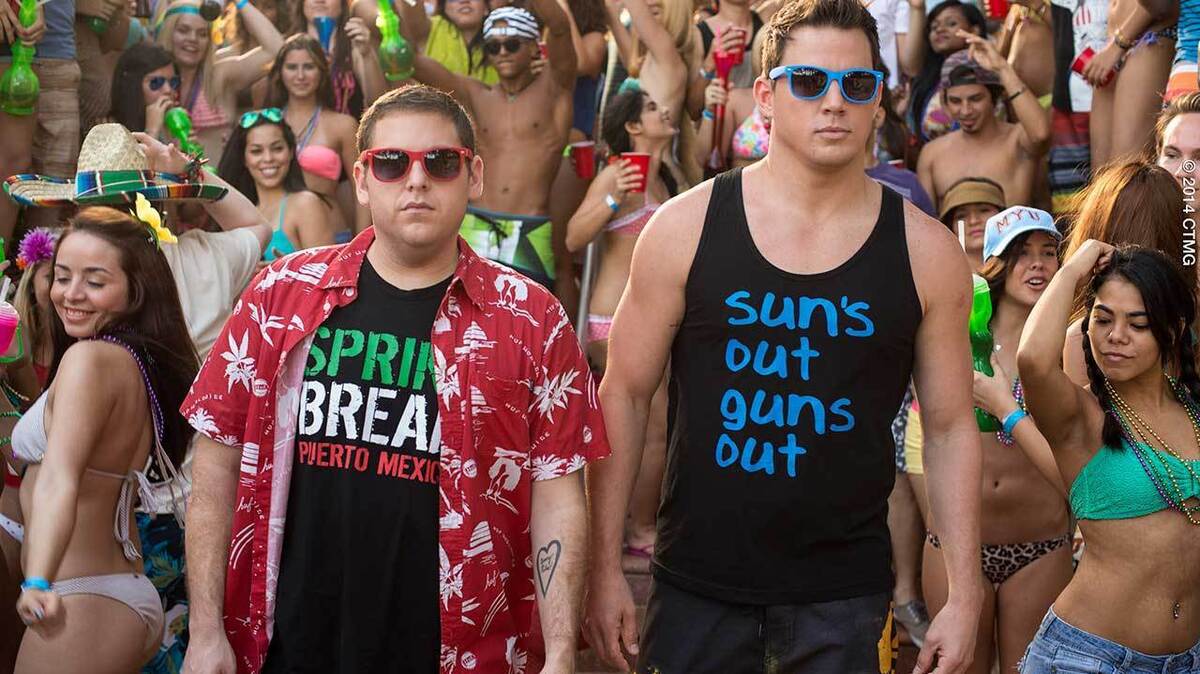 Jonah Hill and Channing Tatum age out of high school in a Jump Street sequel that doesn't mess with its successful formula.

In a summer of sequels — 16 in all — this weekend is the sequelliest, offering blockbuster deja-vu (How To Train Your Dragon 2 AND 22 Jump Street) as well as a few object lessons in how to train your audience. One film goes all meta with its concept, the other goes back to basics, and for a change, both approaches work.

Meta's the mantra for Phil Lord and Christopher Miller, who're managing three franchises these days — Lego, Cloudy with a Chance of Meatballs, and Jump Street — and who're going to have to get off the sequel train pretty soon. For the moment, though, they're riding it in style.

21 Jump Street was already a been-there-done-that TV cop show parody, a fact they reference by beginning the new film with a "Previously on Jump Street ..." recap, followed by a meeting with Nick Offerman's Deputy Police Chief, who directly addresses the original low-budget stakes as the movie studio saw them:

"Nobody cared about the Jump Street reboot," he tells stars Channing Tatum and Jonah Hill, "but you got lucky, so now this department has invested a lot of money to make sure Jump Street keeps going."

A lot of money that you can see on screen in a first-reel FX-enhanced chase sequence atop an 18-wheeler that has cars bursting into flame with production values justified by the first film's $200 million grosses.

"It's the same case," he keeps telling them. "Do the same thing."

All to establish that officers Schmidt and Jenko aren't very good at action heroics, giving their captain (Ice Cube) an excuse to send them back undercover as verrrry over-age students. "Same identities, same assignment," he tells them, except this time in college, not high school.

In the first movie, the joke was that beefy Tatum and nerdy Hill had to work together because high school had changed so much since they'd attended that they no longer knew how to negotiate it on their own. Tatum's macho jock-ness didn't play well with today's socially-aware kids; Hill's dweeb had no idea how to be in with the in-crowd. This film reverses that dynamic — Tatum makes the college football team, Hill's back in nerd hell (though with unaccountable luck with the ladies), which isn't as naturally funny, so the screenplay makes bro-mance jokes instead, detailing a dysfuntional partnership that a college shrink, perhaps understandably, misjudges as a couples-counseling problem.

Filmmakers Phil Lord and Chris Miller (who are themselves impressive partners at this point) know enough not to mess with a successful formula. They keep the self-referential stuff coming, from opening to closing credits (with the latter taking sequelitis to its logical conclusion), with cameos, movies jokes (an Annie Hall riff has a nice payoff), and even by pairing a cop-dissing young Ice Cube on the soundtrack, with the middle-aged cop-supervising Ice Cube on screen.

"It's the same case," he keeps telling them. "Do the same thing."

A sequel rule to live by. 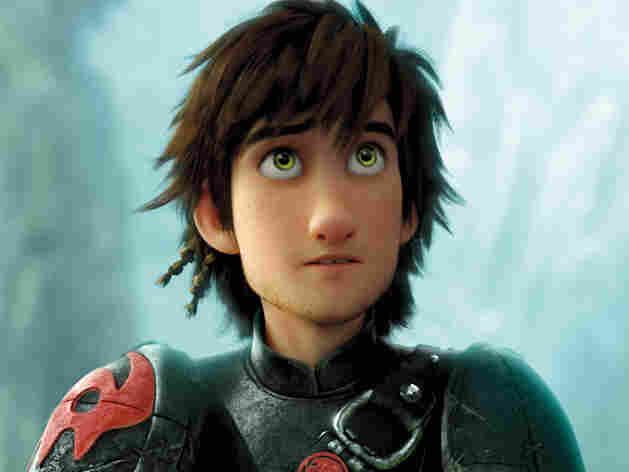 Jay Baruchel voices a grown-up Hiccup Horrendous Haddock in How to Train Your Dragon 2, which chooses to advance its story organically, expanding the world and its conflicts. DreamWorks Animation hide caption 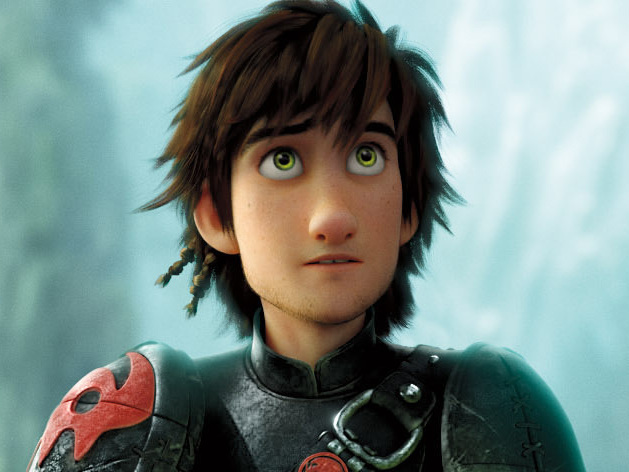 Jay Baruchel voices a grown-up Hiccup Horrendous Haddock in How to Train Your Dragon 2, which chooses to advance its story organically, expanding the world and its conflicts.

The alternative, though, is to advance the story in an organic way, and the How to Train Your Dragon folks take that route for their Part Two, picking up five years after we last saw Hiccup, who was then a teen Viking-Chief-in-training, and who's now an angular, considerably more sure-of-himself 20-year-old.

Hiccup (voiced by a still squeaky Jay Baruchel) lost a leg in the first movie but he's adapted, as has his rambunctious half-panther/half-lizard dragon pal Toothless, who has that prosthetic tailfin. No big deal is made of this — a fact that will likely thrill parents of physically challenged kids — because what's happening this time is that our heroes are figuring out the world around them.

In the first film, Hiccup had what was essentially a child's task: overcoming his own (and then his tribe's) fear of monsters. With the fire-breathing beasties now tamed, both hero and filmmakers can move on to more mature pursuits — figuring out how to deal with an aggressor who can't be reasoned with, for instance, and appreciating the balance to be found in an environment that's admittedly fanciful, but is gorgeously substantial as realized on screen.

Hiccup will discover that with power comes responsibility, and that the ones you love can make terrible, even deadly, mistakes. Heady stuff for a kid-flick, though there are certainly precedents. Director Dean DeBlois has been saying this installment is the middle movie in a How to Train Your Dragon trilogy. It's clear that he took inspiration from the first Star Wars trilogy — not a bad model for breathing new life, and yes, a bit of fire, into one of Hollywood's more nuanced animated franchises.