Accessibility links
First Listen: Phish, 'Fuego' Twelve albums and more than 1,500 shows into its career, Phish has never seemed more at ease embracing what it does best, while still trying to refine and reinvent its own formulas. 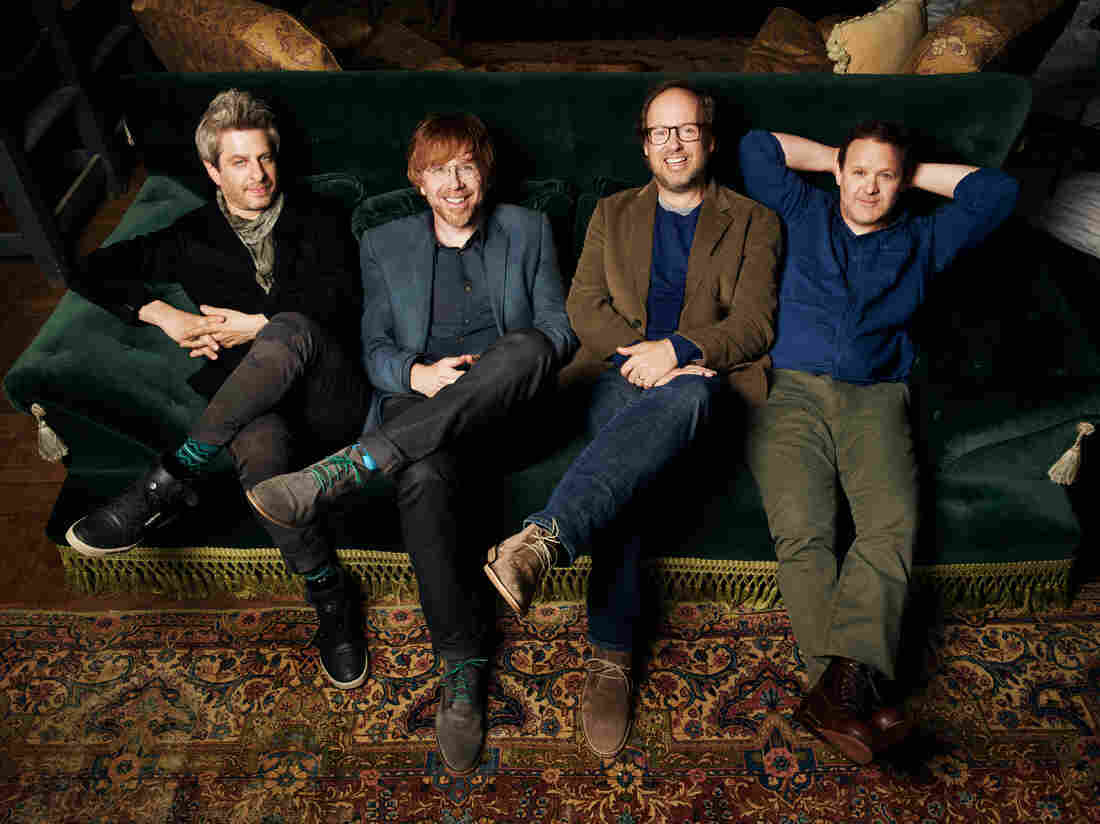 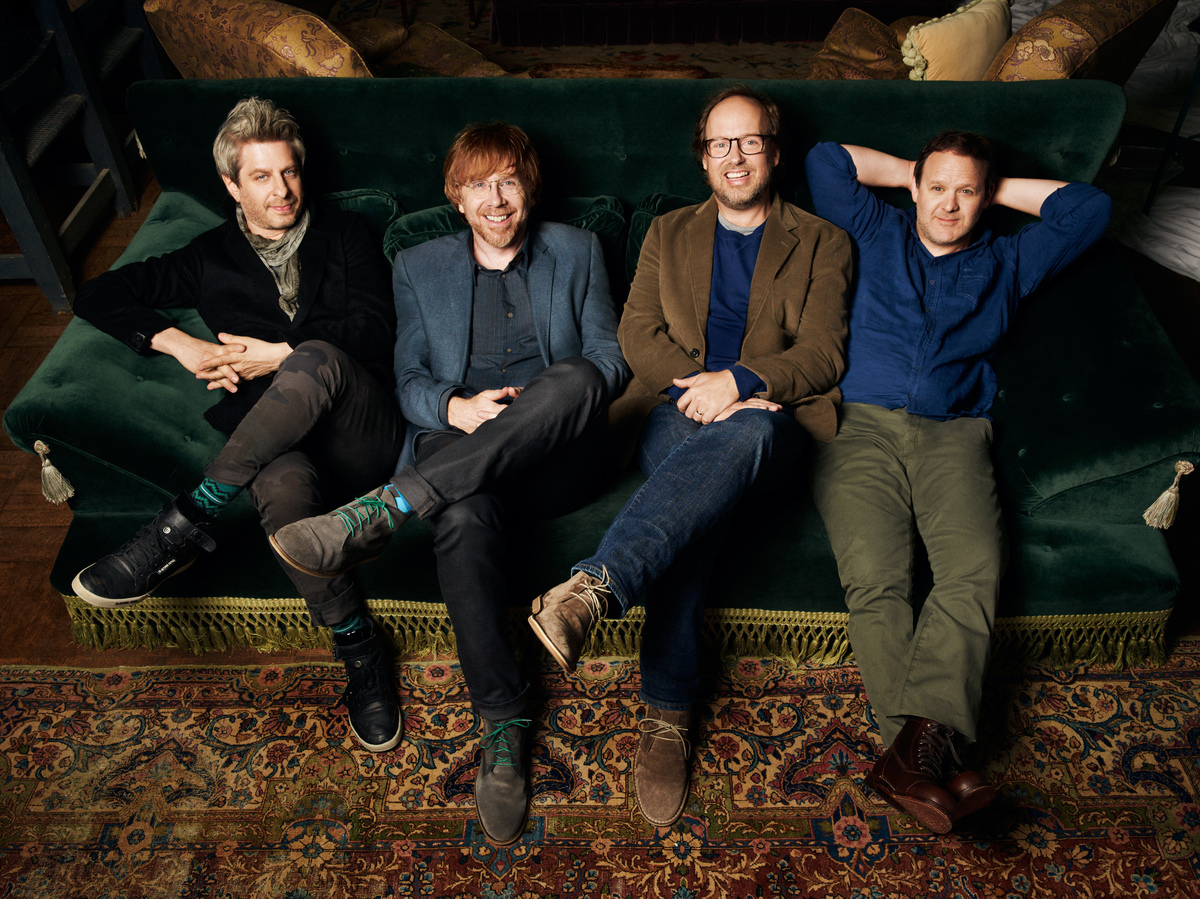 Peter Yang/Courtesy of the artist

Whether you know its work or just its reputation, you've probably already made up your mind about Phish. Maybe you love the band and its music, maybe you can't stand them, or maybe you liked them and have since moved on to other things. Phish is one of the most dynamic and celebrated live acts in all of music, with a loyal community any artist would envy, but it's also divisive. This is a band that inspires passion with its multipart compositions, meandering improvisations, playful (often nonsensical) lyrics and unwavering positivity. For the same reasons, it also courts punchlines from its fervent detractors.

Any band 30-plus years into a career of remarkable successes and struggles, not to mention a "hiatus" and a "breakup," is unlikely to change many minds with its 12th album. Yet here we are: Phish's first studio record in five years, Fuego, is the Vermont band's finest work in more than a decade — since at least 1996's Billy Breathes or 1998's The Story of the Ghost.

Where Billy succeeded by reining in Phish's interplay in favor of restrained folk rockers, and where Ghost sculpted free-form improvisations into dark funk, Fuego aims to split the difference. Recorded in late 2013 — in Nashville and at Fame Recording Studios in Muscle Shoals, Ala., before the band reconvened at its own studio, The Barn, in Vermont — Fuego was produced by Bob Ezrin (Pink Floyd, Peter Gabriel). Ezrin wanted the feel of Trey Anastasio, Mike Gordon, Page McConnell and Jon Fishman playing together in the same room, reacting in real time. While still succinct, at least in Phish terms, these 10 songs feel about as close as the group has come to capturing its "live self." For a band that's long struggled to balance concise songcraft and live energy on its studio albums, that's a major accomplishment.

Fuego asserts itself right off the bat with its fiery nine-minute title track. The long-simmering, shape-shifting rock anthem showcases Anastasio's distinctive guitar shredding and the band's impressive gift for syncopation and exuberant climaxes. Throughout Fuego, Phish embarks on a series of genre exercises: There's straight-ahead gospel-infused rock ("Sing Monica"), slinky cow-funk ("555") and airy, Latin-infused pop ("Waiting All Night"). The record culminates in another fantastic highlight, "Wingsuit," a dreamy lullaby that soothes with the mantra "And it feels good" before swelling to a three-guitar solo in its grandiose finale.

That said, though Phish's members have always been remarkable instrumentalists, lyrics are rarely a strong suit. Phish songs tend to be knotty mouthfuls — and they can be downright silly, with words used more for how they roll off the tongue than for any deeper meaning: "Herbivorous, crepuscular / Cuddly, but muscular," the band sings in the goofily self-referential "Wombat." But meatier, more mature themes pop up in Fuego, too, like aging and wistful resignation over a collapsing relationship. "Waiting All Night" drops hints of heartache and regret, as Anastasio sings, "And I said I'm sorry, but you went so far away / Don't know why you left me this way."

Then there's "The Line," a song that on the surface is based on Memphis college basketball player Darius Washington Jr., who blew some key free throws during a championship game. But it also addresses facing down fear and grappling with disappointment in life's big moments: "Try to see your future from the line / And you're clinging to the notion you'll be fine," Anastasio sings, in a possible nod to the pressures Phish itself may feel.

It's hard to listen to Fuego and not forecast how these songs will eventually function in the set list — not to mention which will yield the best jams. Even for Anastasio, that's what he's most keen on discovering. With songs like "Fuego" and "Wingsuit" hinting at future concert epics, it'll be fascinating to hear these songs expand and find new life on stage.

Phish albums must serve three masters: die-hards who've heard hundreds of hours' worth of live recordings, newcomers who may be buying their first Phish album, and lapsed fans who feel they've outgrown the band. Phish has long been a gateway for people who now listen to jazz, ambient electronic music, metal, punk, indie rock and Americana, but the group rarely gets much credit for that influence. None of that seems to matter to Phish anyway; 12 albums and more than 1,500 shows in, it's never seemed more at ease embracing what its members do best, while still trying to refine and reinvent its own formulas.