Accessibility links
For Casey Kasem, A Long-Distance Dedication One listener remembers the voice of Casey Kasem speaking to a young, lonely music nerd of the future — one who regrets not getting a chance to say thank you, so this will have to do.

For Casey Kasem, A Long-Distance Dedication

For Casey Kasem, A Long-Distance Dedication 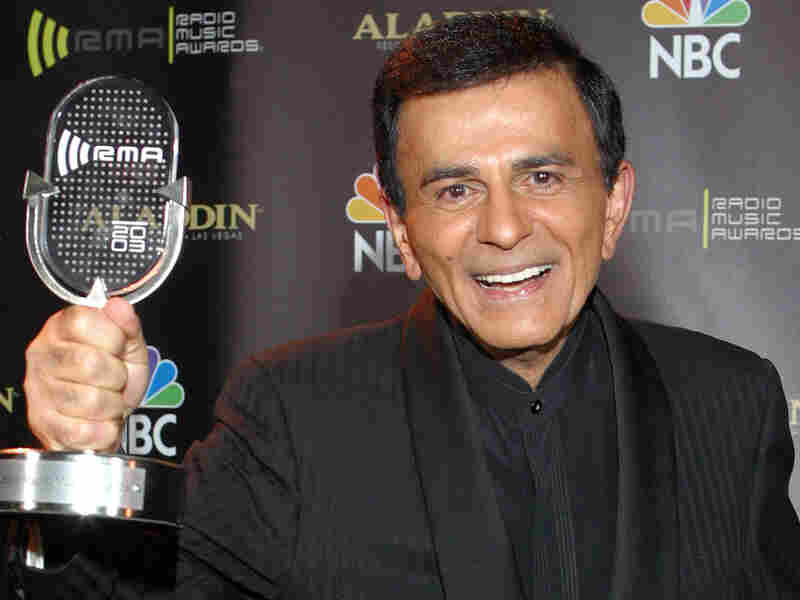 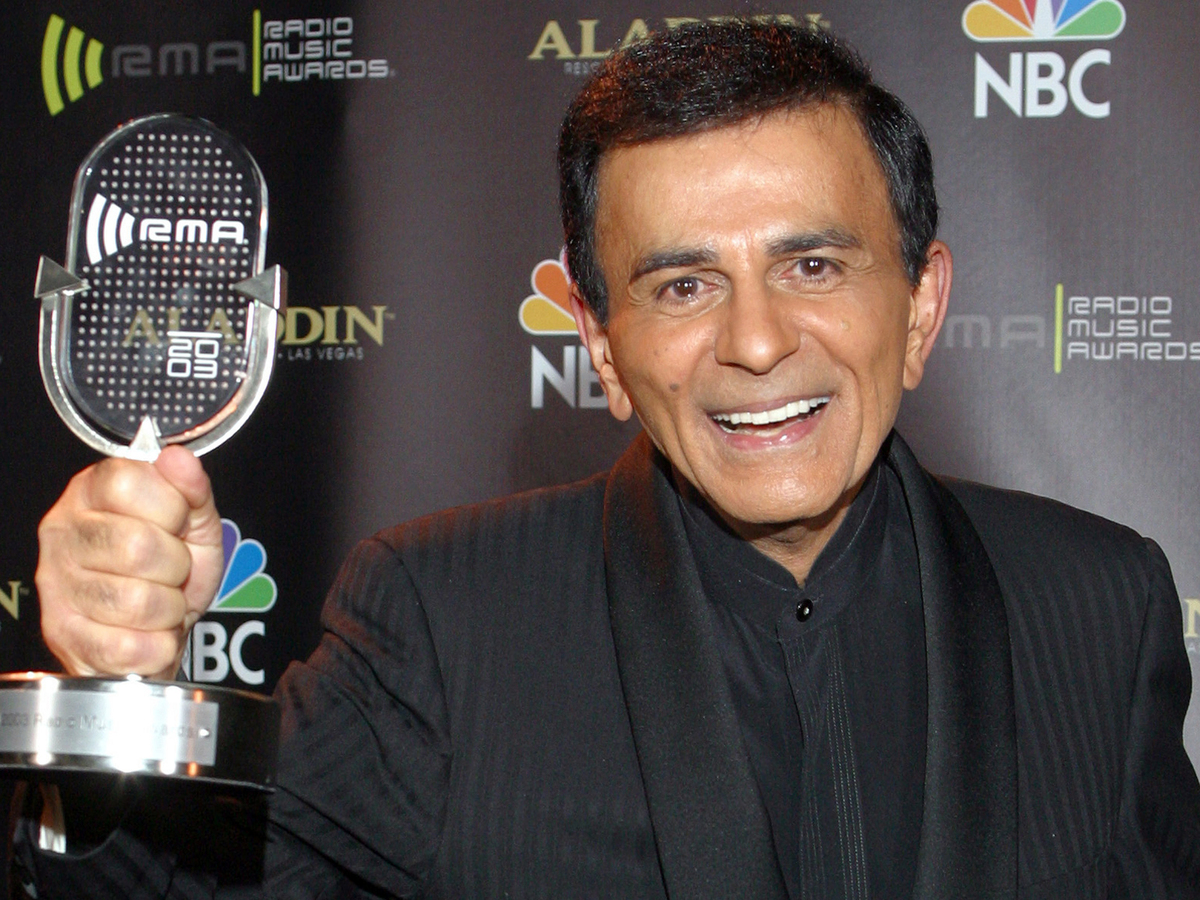 The fact that Casey Kasem, the 82-year-old co-creator and host of the American Top 40 Countdown, reportedly died peacefully while surrounded by his three children, despite a previous tug-of-war between his children and second wife, seems not only fortunate but apt. It means his death can honor his career's great achievement.

It wasn't American Top 40, or being the voice of Shaggy on Scooby Doo, or mixing statistical data with pop music or inventing the Long Distance Dedication. No, all of us who spent adolescent weekends listening to Casey Kasem's countdown knew it as one of American music's great cures for loneliness, a reminder that the 40 most popular songs weren't the ones you should embrace to be cool or popular, but the songs kids like you all over America were listening to already. To hear Casey Kasem tell it, you were part of that "all over America." You loved music? That was cool enough, and you were not alone.

A Michigan native, Kasem had been a DJ at radio stations in San Francisco, Los Angeles and Cleveland before launching American Top 40 on July 4, 1970. Pop song rankings and countdowns weren't new: American Top 40 originally used Billboard Magazine's Hot 100 list, which had been around since 1958. The radio countdown format went back to Your Hit Parade, launched in 1935. Kasem's innovation and his genius were not in the what but in the how: he made something as dry as the on-air reading of sales data exciting for the era when pop music was losing its cachet as the voice of generation and becoming a ubiquitous commodity — less Woodstock, more Peter Frampton.

Tacitly accepting that pop songs no longer screamed with purpose on their own, Kasem instead focused on ancillaries — trivia, anecdotes, backstories. American Top 40 got its rankings via radio play and record sales, but Kasem gave each song a narrative, not just a numeral. It made the countdown neither a competition like sports, with obvious winners and losers, nor an indicator of taste. It made songs seem interesting, whether or not you liked them. They were topics for discussion. They were something to share.

It was music geekery, 30 years before Pitchfork and from a most unlikely source: a middle-aged dad with a gentle "isn't this great?" arch in his voice, who seemed as excited about U2 or Prince as he was about Stacey Q or Men Without Hats. American Top 40 in Kasem's hands wasn't about discernment but knowledge, about being smart rather than fashionable. It was what we now commonly call "nerding out."

American Top 40 peaked in popularity in the early 1980s, before the consolidation of commercial radio a decade later and with a substantial boost from a hot cable channel called MTV. I discovered AT 40 in sixth grade when Kasem began repurposing the countdown as a half-hour Saturday morning TV show and right before his 1988 departure from the program over a contract dispute. I've still got the orange and black Maxell cassette from the first time I listened to the countdown all the way through and tried to stop the tape before Kasem's voice came in. I wish I still had the legal pads I'd cover with lists of which songs fell how many "notches" on the countdown while my mother yelled "It's a beautiful day out there, Kevin!" from downstairs.

To many of us at that age, lousy at sports and at sea with dating, pop culture was its own kind of success. Memorizing how high "Uptown Girl" got in the countdown (#3) was the first place we felt good at something. Factoids, announcements, leap forwards and stumble backs of that week's countdown — I transcribed them all, because knowing felt like power. But there was something else, too: That guy on the other end of the radio held you spellbound for four hours with a narrative spun from every cool thing you could think of about popular music. Was there a grown-up job in that someday?

The most important word then in "American Top 40" wasn't "Top 40," a radio industry term invented in the 1950s, but "American." Kasem began each broadcast by saying, "These are the songs you're buying and radio stations are playing all over America." And I'd imagine those kids, kids like me all over America — kids who did not have a team to lead to victory that day or a new crush to meet for ice cream, kids in their own empty bedrooms being told it was OK to care about music this much, to want to be good at something that badly.

In only a few years, Kasem left the countdown, I started high school and the Top 40 format's dominance over FM radio began to erode. Predicting the coming of Nirvana, my friends laughed at AT 40, its smell of conformity and host who wouldn't know irony or sarcasm if it slapped him. At my precious progressive high school (where the prettiest girl in my class had seen The Smiths seven times) in my precious, progressive town (home to Kurt Cobain's favorite venue The Blind Pig), things that were "popular" withered from scorn. So when my best friend told me that Casey Kasem was for losers, I believed him, hid my legal pads in the back of the hall closet and walked away.

None of us buying our first Radiohead T-shirts could have known that, three decades later, we would be living in the world Casey Kasem helped create. It is the music fan's time, powered by self-curation and the urge to share. Our playlists, queues, devices and social media profiles may be as unique to each of us as our genetic code. But sharing and effusing are the highways this data travels. Since those highways are choked with music already, we search in the noise not just for experts but also for common ground, not just for someone who knows music better than us but someone who feels as enthusiastic about sharing the joy of it as we do.

In an earlier time, we would find our musical brothers and sisters by picking a side — alternative over mainstream, rap instead of rock — seeing who agreed, then defending our choice to the death. In the 21st century, that feels like hating on hugs and world peace. We like the music we like. Instead of xenophobes, we are now all world travelers, on the same journey to find more.

Early fall 2012: a 39-year-old writer finds an iPhone app that records rebroadcasts of American Top 40. He listens on his regular Saturday-morning walks. When Casey Kasem ends the broadcast as he always did, with "Keep your feet on the ground and keep reaching for the stars," he stands on his toes and reaches for the stars.

Why was this Kasem's signoff? I've never heard him explain it. But it's obvious it wasn't congratulations to whoever sold the most records that week. It was for you, the listener. I took it to mean that music, at its best, pointed to a different tomorrow, of what you could be even if you weren't quite there yet, and that trying was worth it.

I'm there now. I have a grown-up job writing about culture, friends and a happy marriage. The legal pads are lost to time, though I miss them a little. Now, when I'm done on Saturdays, I turn off the countdown and use a different app to tune into where music is right now.

I didn't pick back up with Casey Kasem and his countdown for nostalgia's sake. I was a lonely teenager and am a happy adult. I listen to this beautiful thing Casey Kasem made to measure how far I've come and remember that others, all over America, felt this stuff was just as important. It reminds me of the kind of unity of spirit that music promises and delivers on its best days.

When I heard of Casey Kasem's death, I called my wife and got about three sentences out before I started to cry. "Most of us do not get to meet our heroes," she said, comforting me. I understood that. He had been sick and declining for more than a year. Being the contested ground of a family at war is no way to live — and, worse, no place to die. Thankfully, that wasn't his lonely last song. But what breaks my heart is that, for the hours of joy, companionship and unending hope his program showed me, I was never able to tell him, "Thank you."

And so this long-distance dedication is going out to Casey Kasem, who taught me it was OK to love music this much. I will look up to those stars, the ones you beseeched so many of us to reach for, and I will remember you there.

Kevin Smokler is a San Francisco-based writer working on a book about '80s movies.