Accessibility links
Plastics Don't Disappear, But They Do End Up In Seabirds' Bellies When bottles and bags are cast out to sea, the debris never truly goes away — it just gets smaller. And these plastic particles, called microplastics, are ready meals for fish and birds. 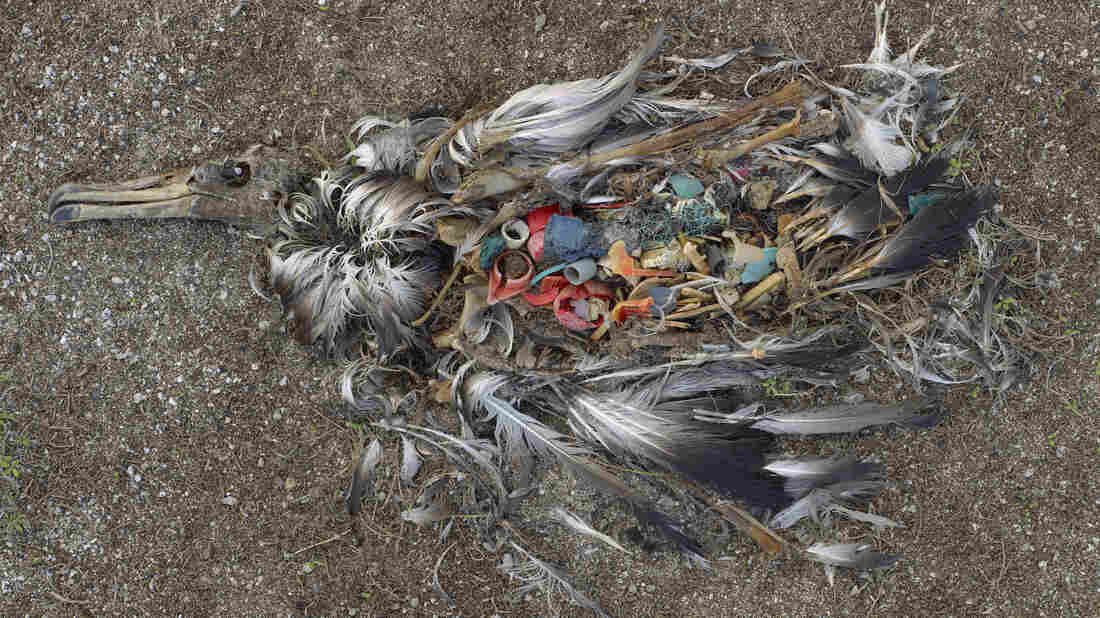 A dead young albatross on the Midway Atoll in the Pacific Ocean. You can see more of photographer Chris Jordan's work on the effects of plastics on seabirds at The Picture Show. Chris Jordan/Flickr hide caption 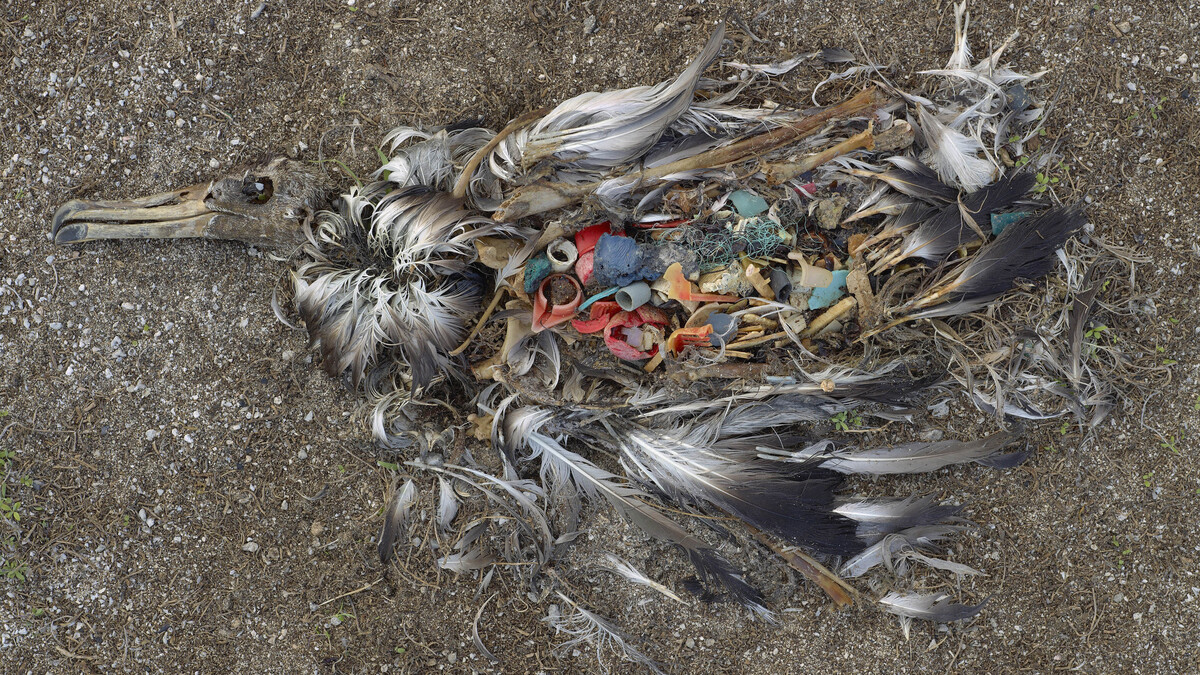 A dead young albatross on the Midway Atoll in the Pacific Ocean. You can see more of photographer Chris Jordan's work on the effects of plastics on seabirds at The Picture Show.

The vast majority of debris in the ocean — about 75 percent of it — is made of plastic. It can consist of anything from plastic bottles to packaging materials, but whatever form it takes, it doesn't go away easily.

While plastic may break down into smaller and smaller pieces, some as small as grains of sand, these pieces are never truly biodegradable. The plastic bits, some small enough that they're called microplastics, threaten marine life like fish and birds, explains Richard Thompson, a professor of marine biology at Plymouth University in the U.K.

How Soda Caps Are Killing Birds

"The smaller the piece of debris, the more accessible it is — and the wider the range of creatures that could potentially eat it," says Thompson, who talked with NPR's Melissa Block about his research on the effects of these tiny particles.

Thompson says limiting the damage plastics can cause to sea life doesn't mean giving up plastic entirely. "It's not about banning plastics," Thompson says. "It's about thinking about the ways that we deal with plastics at the end of their lifetime to make sure that we capture the resource."

By recycling items like plastic bottles, he says, and then ultimately recycling those products again, what might have become harmful debris can be turned instead to better use — and kept out of the ocean.

You can hear Block's full conversation with Thompson at the audio link above.

What we're dumping into the ocean can be gauged by what washes up on shore. The vast majority of marine debris, about 75 percent of it, is plastic - plastic rope, plastic bottles, packaging materials, food containers, fishing line, plastic bags. These may break down into smaller and smaller pieces, but they never biodegrade. And those tiny pieces - or micro-plastics - threaten marine life too. Marine biologist Richard Thompson of Plymouth University in England has been studying the effects of those tiny particles as small as a grain of sand.

RICHARD THOMPSON: If we were to have, say a coffee mug in front of us, full of sand and we worked our way through it, we might only be finding 2, 3, 4, 5 - perhaps an exception - 20 pieces of micro-plastic, which doesn't seem a lot out of a coffee mug full of sand.

THOMPSON: But when you scale that up to the number of beaches worldwide and you consider that this material's also present at the ocean's surface and at the seabed, you realize that there's actually quite a lot of material that's present at this microscopic scale. And it certainly appears now that that is the most numerous type of marine debris - these microscopic fractions. And of course over time, what we would like to expect is that the large items that are present in the ocean today will break down progressively into these smaller and smaller pieces. So you know, unfortunately, even if we were to stop releasing plastic to the oceans tomorrow, we would still likely see an increase in these very, very small particles. And that's why it's important that we understand the potential consequences.

BLOCK: Well, what are the consequences? Why are these tiny particles such a big problem?

THOMPSON: They are of concern because they could result in different problems to the larger debris. And we don't fully understand, at the moment, the nature of those problems. We know that large items of debris can threaten a whole range of species through entanglement and ingestion. And of course the smaller the piece of debris, the more accessible it is - the wider the range of creatures that could potentially eat it, including some quite small marine invertebrates. Things, you know, less than an inch in length - some small selfish, small marine worms have the potential to ingest these microscopic fragments of plastic. One recent study looking at a commercial species of crustacean - a kind of small lobster - the Dublin Bay prawn - showed that over 80 percent of some populations had small but had quantities of plastic in their guts - not very many particles, but 80 percent of the individuals. Similarly, if we look at some seabirds - if we look at the northern fauna - we find that up to 95 percent of some populations have got plastic in their gut. So there's cause for concern there, first, to want to understand more about the impacts.

BLOCK: Along with ingesting these microscopic particles, there have been studies done - necropsy's done on wildlife show huge amounts of big pieces of plastic inside their systems. What do those studies show?

THOMPSON: Well, I've seen examples from the guts of a whale, which has shown substantial numbers of plastic bags. I've seen examples coming from large seabirds, like an albatross, which could contain really quite large everyday items like a toothbrush or a cigarette lighter.

BLOCK: Short of banning plastics altogether, what would you say is a solution that would reduce - have an impact on the amount of plastic that ends up in our oceans?

THOMPSON: The solution certainly is not about banning plastic. Plastics are not the enemy here at all. In fact, plastics bring many societal benefits. And I believe that in the long-term, plastics will help to reduce our environmental footprint on the planet. So it's not about banning plastics, it's about thinking of the ways that we deal with plastics at the end of their lifetime to make sure that we capture the resource. The plastic bottles can be recycled and turned back into new plastic items. So same for many of the things that we see in the sea. If we could capture them and harness that resource and use again, it would be much more efficient.

BLOCK: And what about cleaning up the vast amount of plastic that's already in the ocean? How do you deal with that?

THOMPSON: Well, cleanup of course is very important because our seas are heavily contaminated with plastic debris. The problem is, that at the moment, we're putting this debris and so quickly and we don't have absolute numbers on the rates of injury to the ocean but the quantities are so substantial that it's going to be almost most impossible for us to think about cleaning up as fast as it's going in. So the analogy I would use is, it's a little bit like trying to mop the floor up in your bathroom. If the bath is overflowing and both taps in the bath and the shower are all running at full speed, it's a waste of time trying to just clean up. You will need to clean up eventually but the first thing is to stem the flow. And that has to be the priority.

BLOCK: Professor Thompson, thanks for coming in.

THOMPSON: Thank you very much.

BLOCK: Richard Thompson is a professor at the School of Marine Science and Engineering at Plymouth University in England.