Accessibility links
Book Review: All Fall Down, By Jennifer Weiner Jennifer Weiner's latest tells the tale of a suburban mom whose outwardly happy life is derailed by pills. Reviewer Annalisa Quinn says the book is hampered by clumsy writing and cruel stereotypes.

Weiner Takes A Tumble With 'All Fall Down'

Weiner Takes A Tumble With 'All Fall Down' 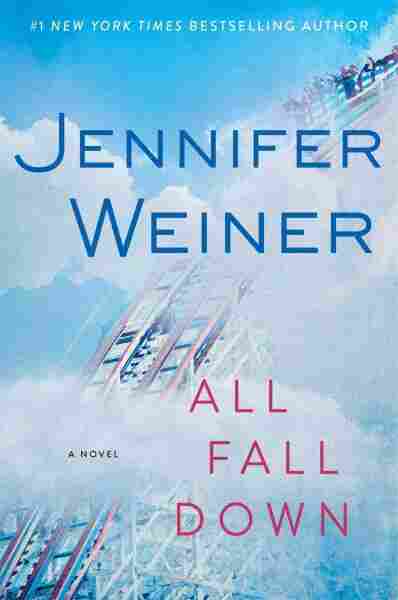 Allison Weiss has a handsome husband, a big house, a successful career and a worsening prescription pill addiction.

At first, Allison's pill habit is decidedly well-mannered: She takes an Oxy before dealing with the snobby parents from her daughter's private school or mean comments on a newspaper feature about her. But suddenly, under the pressure of a screaming 5-year-old, a father with Alzheimer's and a distant husband, the pills become a necessity and Allison ends up in rehab.

"I don't understand it," Allison says. "I have everything I want, everything I was supposed to want, so why am I so sad?" Though the story rarely leaves the safe emotional shallows of trial and redemption, it is rare for Weiner to show that a big house and handsome husband don't automatically constitute happiness.

The book's least tolerable attribute is its unkindness toward the various low-rent "Ashleys and Brittanys and Ambers and Caitlyns" who populate Allison's rehab and whose addictions are of a less polite strain — the heroin and the coke addicts with track marks down their arms. Of course, by the end, they're a happy family — the Ashleys and Brittanys start calling her "A-Dub," and she's throwing ironic gang signs (spare me). They even put on a musical together ("Dope that's so slammin' it makes your heart flutter ... Dealers on corners and needles in gutters ... Wax-paper Baggies all tied up with strings ... These were a few of my favorite things."). But her selfishness and her cruelty are hard to forgive, and when the inevitable reconciliation with her husband happens, all you can think is "Why, Dave? Why?"

Weiner is no more thoughtful about the people back in Weiss' suburban life, where brand names stand in for character descriptions: Lululemon yoga gear or Dansko clogs define their wearers.

Addiction books are often accused of glamorizing drug use, and Weiner avoids that trope through clumsiness, not choice. For an addiction book to be successful, there's a sense in which the readers need to be addicted, too. Weiner doesn't have the vocabulary or emotional reach to make us fall along with Allison.

Explaining her love of painting, Allison describes "the way a Kandinsky or Klimt could echo inside of me like a piece of music." This is also true of some books, or sentences, or pieces of poetry. Is it too much to also want out of a novel?

So All Fall Down is not mediocre because of its predictable ending and its middle-aged white lady focus. It's mediocre because it does not test its confines, does not seduce or experiment, does not echo inside of you like a piece of music. It doesn't even make you smile.