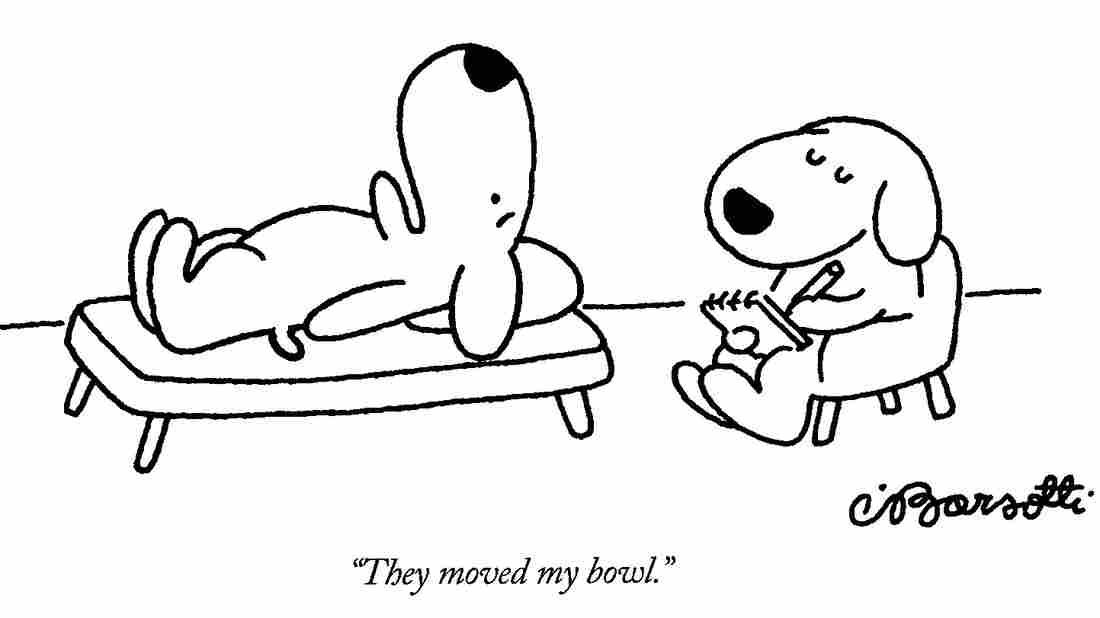 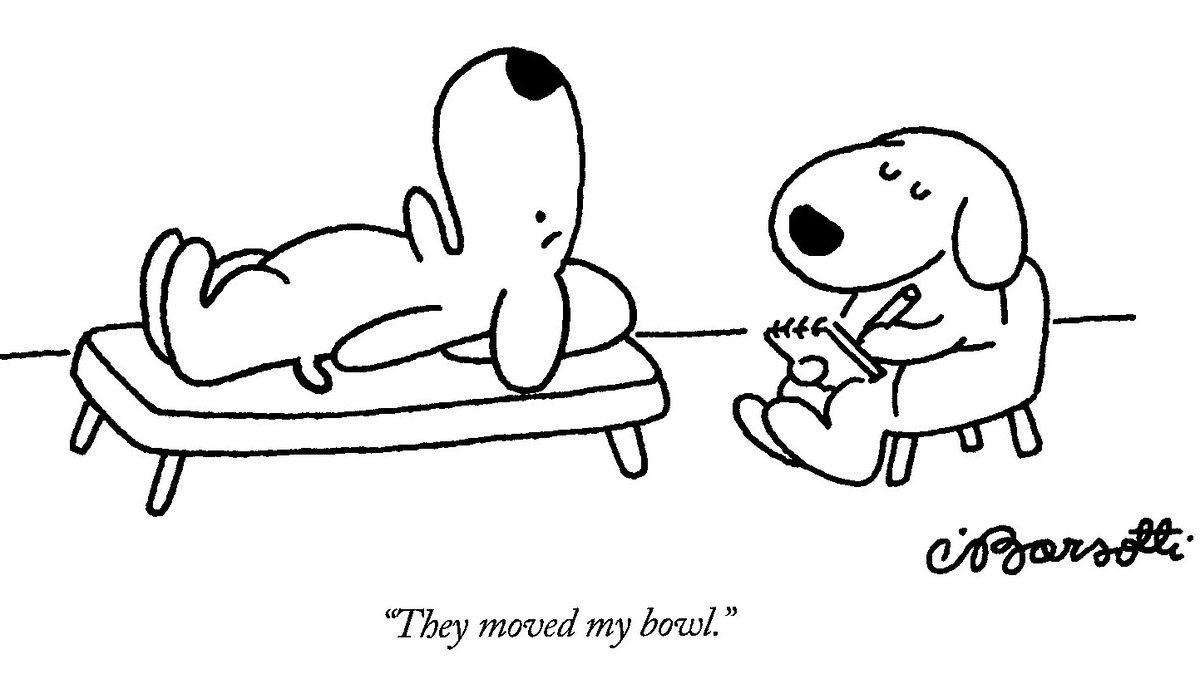 Charles Barsotti created more than a thousand cartoons for the New Yorker, many of which featured a series of round-snouted dogs just like this hapless pair.

Now, picture this cartoon - a simple ink drawing of a dog, sitting in a chair, taking notes on a pad. Another dog is lying on the dog-therapist's couch and talking. The caption - they moved my bowl. New Yorker staff cartoonist Charles Barsotti, who created that cartoon and more than a thousand more for the magazine, died on Monday at the age of 80. New Yorker cartoon editor Robert Mankoff joins me to talk about Charles Barsotti's art and humor. Robert, thanks for being with us.

ROBERT MANKOFF: It's really my pleasure. That cartoon encapsulates, you know, so much of what Charles Barsotti could do. You know, where, a lot of humor isn't about empathy.

MANKOFF: Every Charles Barsotti cartoon, we want to hug, and it wants to hug us back. I mean that's really the whole human condition.

BLOCK: Well, the human condition, but very much the dog condition. I mean this is a guy who had a clear love of adorable, round-snouted dogs. We see them a lot in his cartoons.

MANKOFF: But I don't think they're dogs.

BLOCK: They're not about dogs.

MANKOFF: I don't think it's about dogs. Another dog cartoon where there's a older dog saying to the little pup, my advice is to learn all the tricks you can while you're young. It speaks to us because it speaks to us. Basically, his humor was directed back at us and himself, and that's what I think is so endearing besides just the incredible art involved. This - I don't think you can get more sophisticatedly simple, or simply sophisticated than his stuff.

BLOCK: Yeah, well, let's talk about his style of drawing because these are very fluid line drawings, but they are deceptively simple, really.

MANKOFF: Well, because there's exactly the right amount of information you need but no more information than that. And also they're quite lovely. Every week Charlie would hand in 10 or 15 of these drawings like this. So he just became a master of his art over the years by doing it so much and also by something that no one could explain, which is just this type of comic, riffing, imagination, whimsicality - the freedom of thought, where - many, many hallmarks to Charlie Barsotti's cartoons, but for me they certainly standout.

BLOCK: And humor that strikes me as much more gentle than biting.

MANKOFF: Right, he was gentle. And I think the easiest type of humor to do is biting, but his humor is universal. And it's very, very deep, and its poignant. A cartoon I love of his is - OK, it's a clown who's on the phone. He's got a tear coming out of his eye, and he's asking, what's the next best medicine?

MANKOFF: And I - that is so wonderful. Of course his classic, pasta on the phone, which - you know, a piece of rigatoni on the phone saying, fusilli, you crazy bastard, how are you? I don't know how...

BLOCK: Which is just so absurd, it's fantastic.

MANKOFF: It's so absurd, and that becomes shorthand for many people. They'll just use, you crazy bastard, or, fusilli, in a grocery store or something. His humor becomes, you know, part of us - part of our catchphrases. And, you know, I think - I wouldn't say unique in that, but he certainly - when you combine all the things together he's definitely unique.

BLOCK: Charles Barsotti had a cartoon, I think, in just last week's issue of the New Yorker. Is that right?

MANKOFF: Right. He was submitting. I mean it's very, very, very poignant because I talked to him a month ago where he was going into the hospice - about a month ago. And clearly he was ill, and he knew he was going to die. I think he knew this for, actually, quite a while. But really, right up until a few months ago, he was submitting cartoons. Actually his wife, Ray, told me this. She said even towards the end he just wanted the doctors - 'cause he had a brain tumor which was causing tremors - to give him enough medication so he could draw. So he really was drawing right to the end.

BLOCK: That's Robert Mankoff, cartoon editor at the New Yorker remembering staff cartoonist Charles Barsotti who died on Monday. He was 80. Robert Mankoff, thanks so much.

MANKOFF: It was my pleasure and my honor.

This is ALL THINGS CONSIDERED from NPR News.