Accessibility links
Inheriting A Rare Skin Condition, And The Ability To Laugh About It Cheri and Phillip Lindsay both have a rare condition that causes them to gradually lose skin pigment in patches. But it was easier for her to deal with it, Cheri says, because of her dad's example. 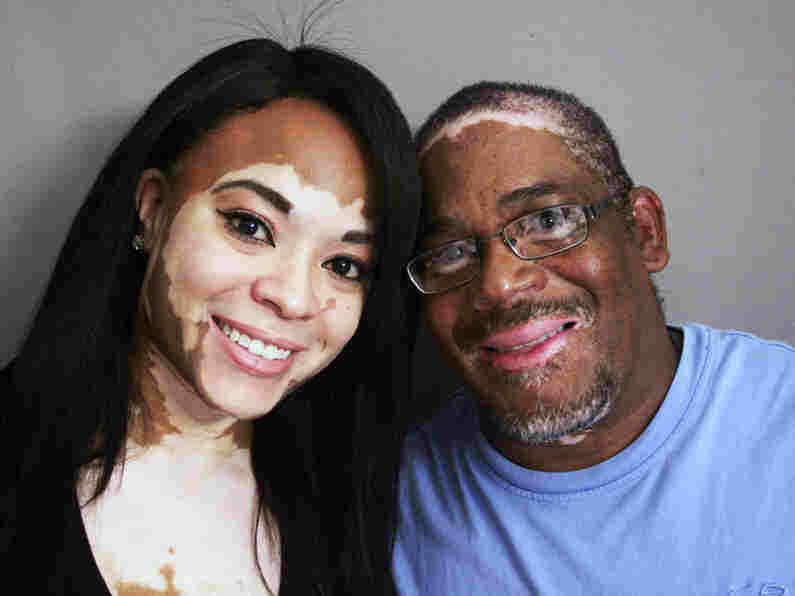 On a visit to StoryCorps, Cheri Lindsay, 25, and Phillip Lindsay, 52, discussed a rare skin condition they share, and how they both have coped. StoryCorps hide caption 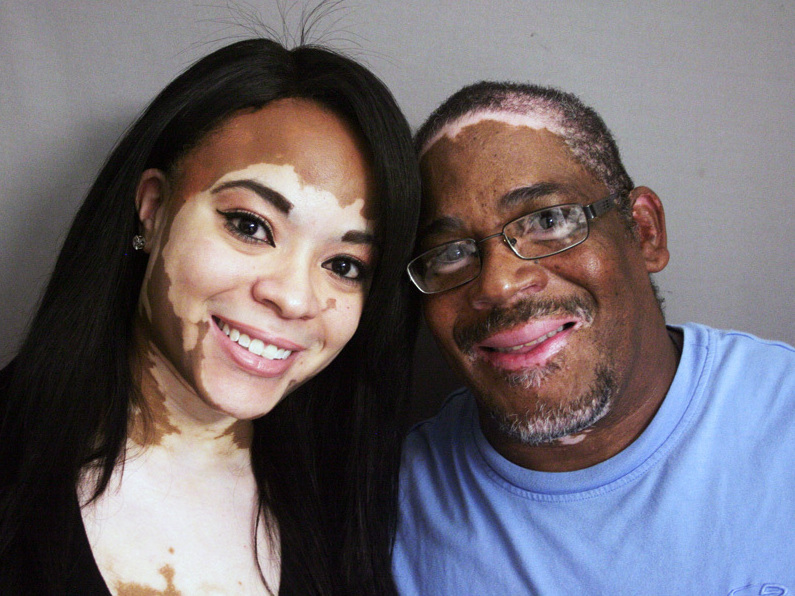 On a visit to StoryCorps, Cheri Lindsay, 25, and Phillip Lindsay, 52, discussed a rare skin condition they share, and how they both have coped.

People with vitiligo gradually lose pigment in their skin, often in patches that appear randomly and grow over time.

But that wasn't the case for Cheri Lindsay. The white pigment on her skin spread rapidly across her body and around her eyes, "like a mask," over the past four years, she says.

She imagines that she's dealt with it better than most, in part because of the example set by her father.

"It was easy for me to deal with because of seeing you deal with it," she tells her dad, Phillip Lindsay, on a visit to StoryCorps in Denver. "I've never seen you without vitiligo, and so it's like, that's normal. That's my dad."

"I have five kids, and when I had to take you guys out and about, you guys wanted to protect me," Phillip says. "Anything anyone did or said, you guys were just like, 'Hey, that's Dad. Watch yourself.'

"And so I had to ease you guys' mind and let you understand that I was OK. I didn't need the protection," he adds.

Cheri says she has had some difficult times. "I get stared at like crazy," she says. "There was a point I would avoid kids in the store. If a kid was coming down the aisle, I'm like, 'I don't need no bread' " — and she would turn around.

"But I did something one time," she recalls. "I was at Wal-Mart, and I'm walking down the aisle and this little boy — he had to be about 5 or 6 — he was just staring at me. He looked so freaked out.

"Well, Cheri," Phillip says, "You know, you're a very beautiful woman and you keep your head up and you just ... walk on. And I couldn't be more proud of you for the way you handle yourself, really. My chest goes out for you."