Accessibility links
Not My Job: We Quiz A Member Of The '7 Up' Series About The Number 8 Nick Hitchon, whose entire life has been chronicled in seven-year increments as part of the British "Up" series, is now a professor at the University of Wisconsin. 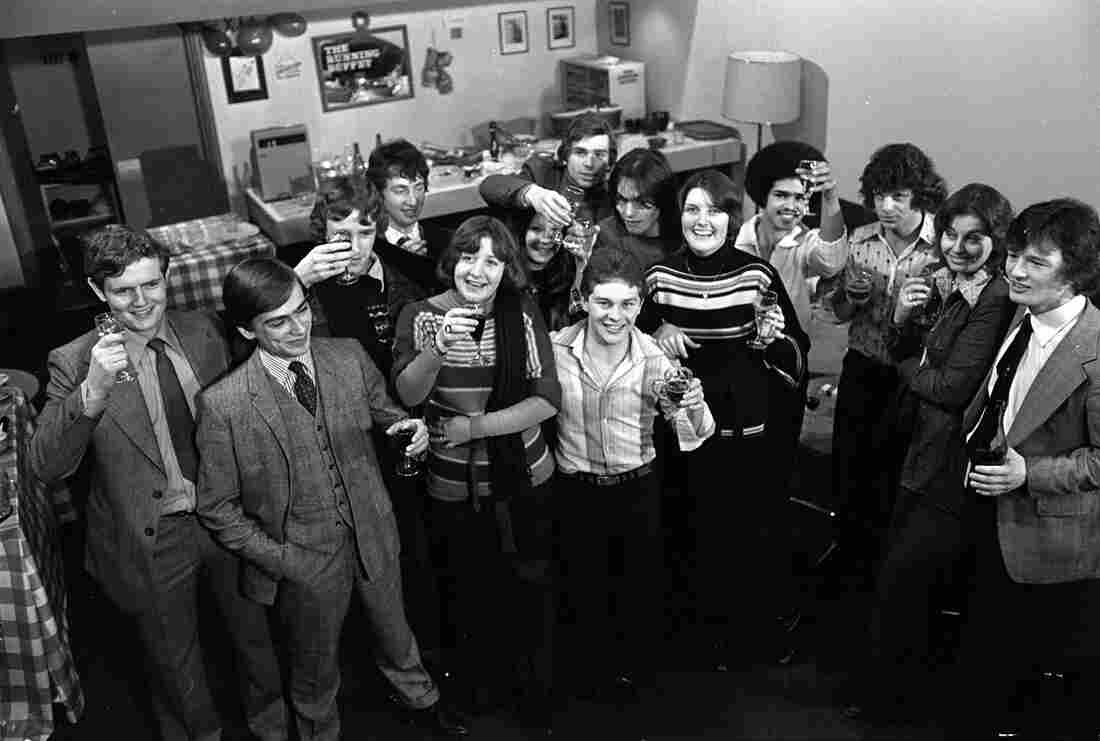 The men and women from the "Up" series pictured in their 20s. Nick Hitchon is on the far right. First Run Features hide caption 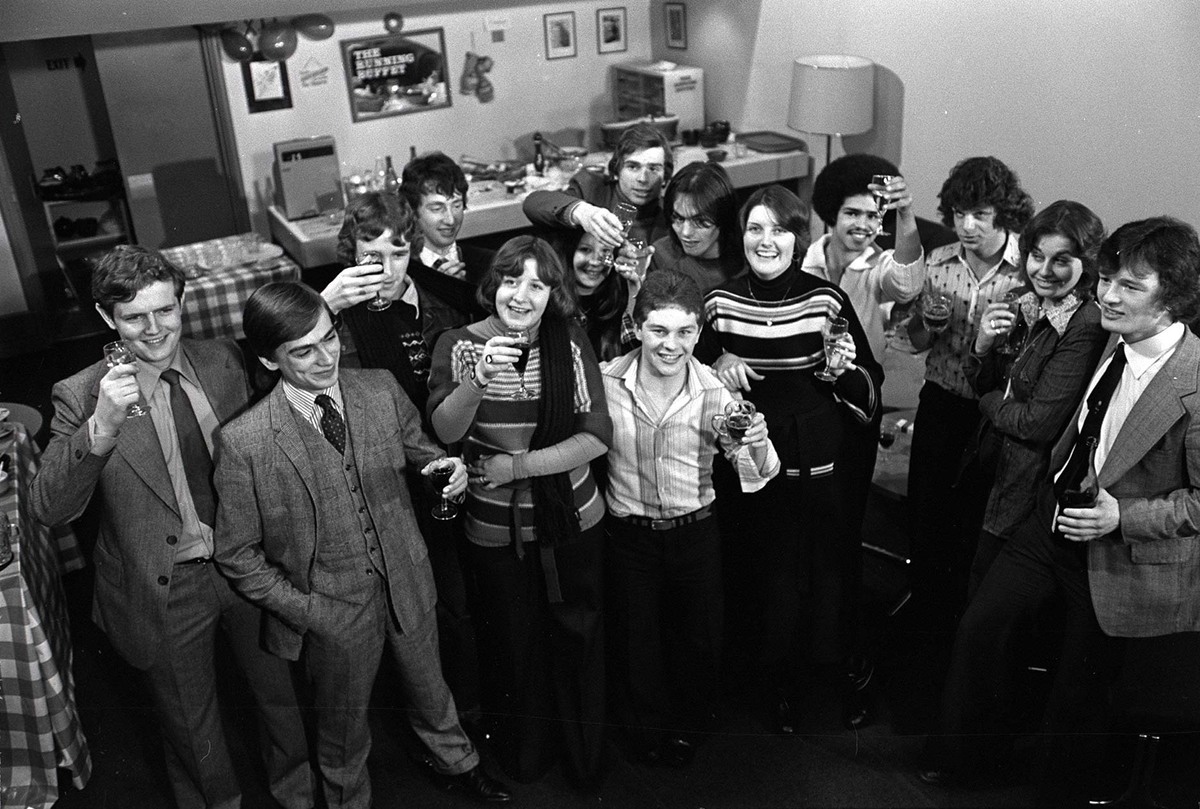 The men and women from the "Up" series pictured in their 20s. Nick Hitchon is on the far right.

Back in 1964, a British TV company filmed a group of 7-year-olds basically being 7, for a half hour special called 7 Up. Then, every seven years, filmmaker Michael Apted went back and made another film about the group: 14 Up, 21 Up, and most recently, 56 Up. One of those kids was Nick Hitchon, and — spoiler alert for 63 Up — he is now a professor at the University of Wisconsin.

Since Hitchon's life has been chronicled in increments of seven, we've invited him to play a game called "8 Up." Three questions involving the number 8.

And now the game where people find themselves taking a weird detour on their lives' journey and end up playing Not My Job. So back in 1964, a British TV company filmed a group of 7-year-olds, basically running around and being 7, for a half-hour TV special called "7 Up." But every seven years thereafter, filmmaker Michael Apted has gone back and made another film about the group, "14 Up," "21 Up," - most recently, "56 Up." One of those kids was Nicholas Hitchon. And I hope it's not a spoiler, for those who haven't seen "63 Up," to say he teaches here at the University of Wisconsin. He joins us now. Nick Hitchon, welcome to WAIT WAIT ...DON'T TELL ME.

SAGAL: So if you see the first film, which I did recently, made in '64, there amongst these little children in Great Britain is this adorable little kid in the farms...

NICK HITCHON: This isn't going to be me.

SAGAL: No, it is you. This is an adorable little child in the Yorkshire Dales, which is a rural area. And this is where you grew up.

SAGAL: And how did they find you?

SAGAL: And that was you. Do you remember, when you were 7 and you made this first film, did you enjoy it? Was it fun?

HITCHON: Sure. People were talking to me and listening to me. I loved that bit.

HITCHON: I always thought that it was a plan. But they told me later that no, somebody called Lord Bernstein or somebody had the idea a couple of years later and went to Michael Apted and said, when are you going back? Oh, go back, yes.

SAGAL: So he says, let's go back. So they call you up. And they say, oh, now you're 14. And we'd like to talk to you again. And you were like - what was your reaction at the time?

HITCHON: Well, if you've seen the film, I was furious because at 7 I was just answering questions. But by the time I was 13, I did not like the way they'd portrayed me. It was clear that they were portraying me as a bumpkin. And, I mean, you know, I was mad.

SAGAL: Well, and you have expressed your anger and disappointment with them by appearing on film to tell them about it every seven years for your entire life.

HITCHON: I showed them.

SAGAL: You sure did.

SAGAL: So you really - I mean, one of the very odd - I mean, it's an odd experience watching the film. That's weird for me, to see a human being...

HITCHON: Can you imagine what it's like for me?

SAGAL: Well, that's the question. What is it like?

HITCHON: It's - for like seven days out of seven years, you're a rock star. And the crew really are rock stars. I mean, these guys are really famous. Michael Apted is incredibly successful.

SAGAL: Yeah, he's gone on to be a very, very successful director. He's made, like, "James Bond" films and Oscar-winning movies.

HITCHON: He has. And so this guy - it's like Mick Jagger turns up at the door with this, you know, let's-make-a-movie sort of thing. And it's like, whoa. But then, after seven days, they say, OK, bye. And they drop me, usually on the street's corner somewhere. And I'm like, what the - literally, what the hell just happened?

SAGAL: Right. I have to ask, why do you keep saying yes when they show up every seven years?

SAGAL: Do you ever find yourself - say it's, like, in the middle of the seven-year period between films. And you're like, I'm having a great year. I look good. I've lost some weight. Man, I wish he'd show up now.

SAGAL: Is there any pressure, though, because we all have the experience of say, like, high school or college reunions. And we're like, oh, gosh. It's our 25th reunion. I've got to look good. I've got to be successful. You have, like, the equivalent of one of those every seven years, except the entire world is invited.

HITCHON: And the thing about what I'm used to is, only things that I say that are really, really embarrassing get used.

HITCHON: I mean when we were 21, there was this other guy in it called Bruce, who's the sweetest man in the world. But Bruce said to me, I'm really worried they're going to ask me about sex. So I said, well, I'll speak to them. So I said to the researcher, Margaret - I said, Margaret, whatever you do, you've got to do me a favor. Do not ask Bruce about sex.

SAGAL: Oh, come on. That was red meat to them. You must have known that.

HITCHON: I didn't. But I thought I'd give it a try. So a little bit later, Margaret gets back to me. She says, we asked Bruce about sex. It was magnificent.

HITCHON: And then I saw Bruce. He said, they asked me about sex...

HITCHON: It was terrible. And actually, it was really sweet. He was fantastic. But...

SAGAL: You see. It was good TV, though.

O'ROURKE: Can I ask you the most American of questions? Do they pay you anything for this?

SAGAL: They never paid you?

HITCHON: It's not a paid gig.

SAGAL: It's not a paid gig.

HITCHON: No. But you're paying me, right?

SAGAL: Your check will be right offstage as soon as you finish.

HITCHON: It will, won't it?

SAGAL: Well, Nick, we are delighted to have you here. And we've invited you to play a game we're calling...

SAGAL: So as we've been talking about, your life has been chronicled into a series of films, beginning with "7 Up." So you're a go-to guy when it comes to sevens. But what do you know about eights? We're going to ask you three questions that involve the number eight. Answer two correctly and you'll win a prize for one of our listeners, Carl Kasell's voice on their voicemail. Bill, who is Nick Hitchon playing for?

SAGAL: Here's your first question. According to Bucks Burnett, owner of the world's only Eight Track Tape Museum...

SAGAL: One of the reasons eight track tapes fell out of favor was what? A, they would occasionally - very rarely - explode, shooting tape at the face of the driver of the car. B, they were exactly one-quarter inch wider than the back pocket of Levi's jeans, resulting in much frustration and ripped pockets. Or C, the songs would often pause to skip to the next track, ruining the mood of make out sessions.

HITCHON: You want me to answer that?

HITCHON: Well, I think making out is clearly indicated here.

HITCHON: I'm going with making out.

SAGAL: You're right. Making out is the problem.

SAGAL: Burnett says, and I quote him, "typically you would, just for two or three seconds, you'd stop making out, wait till the click, and then go back at it. It was sort of a ritual."

SAGAL: OK, Nick, here's your next question. The number eight was important to former Italian prime minister, Silvio Berlusconi. He once bragged, during a phone conversation that was monitored by the police, that he had entertained, as it were, eight women in one night. He said he would have run up his score even further, except for what? A, at one point, his toupee caught fire.

SAGAL: B, the meetings he had to have with the pope were cutting into his sex time.

SAGAL: Or C, more than eight women at once just wouldn't be decent.

HITCHON: Well, the best answer, without a doubt is B.

SAGAL: And it is the true answer.

SAGAL: In the same conversation in which he bragged about this sort of eight-is-enough, if you will, evening, he said he'd have even more fun, but he had to go keep meeting the pope.

HITCHON: Because I was going to go with the sex theme. But they were all sex themed. So...

SAGAL: It's true. You can't really lose. All right. So if I'm not mistaken, there is no sex in this last one. So here we go - last one for perfect. Back in April, a Washington man who attended an auction said he might have got caught up in the moment when he bid $70,000 to buy eight what? A, eight strands of hair from the back of actor Robin Williams.

HITCHON: Well, I like C best, out of those.

HITCHON: You know, it's pretty clear that whatever I say, he says it's right.

SAGAL: No, no. That's actually true. No, no. I like the films. I don't like them that much.

SAGAL: No. I wouldn't lie for you. It's true. These four pairs of boxing squirrels - eight squirrels in all - are depicted posed in sort of Victorian-era boxing gear. They're absolutely amazing. And they used to hang in the lunch room at the Goodyear factory in Akron, Ohio. And nobody knows why.

SAGAL: Bill, how did Nick do in our quiz?

KURTIS: Nick got three up.

SAGAL: You killed it. You did great. Nick Hitchon is one of the stars of the "7 Up" series of documentary films and a professor at the University of Wisconsin at Madison. Nick Hitchon, thank you so much for joining us here.

SAGAL: Nick Hitchon, everybody. In just a minute, Bill Kurtis is going milking in our Listener Limerick challenge. Call 1-888-WAIT-WAIT to join us on the air. Support from NPR comes from NPR stations and Angie's List, connecting consumers with user-reviewed contractors, an online marketplace and concierge support for home improvement services, angieslist.com. The Ford Foundation, working with visionaries in the frontlines of social change worldwide, at fordfoundation.org. And Esurance, with a smartphone app that lets customers take care of their car insurance on the go. Esurance, welcome to the modern world, esurance.com.