Accessibility links
Buried By Picasso, The Man Beneath 'The Blue Room' Tells A Story In Pablo Picasso's painting The Blue Room, infrared technology this week revealed the canvas' previous occupant: a portrait of a melancholy, mustachioed man. 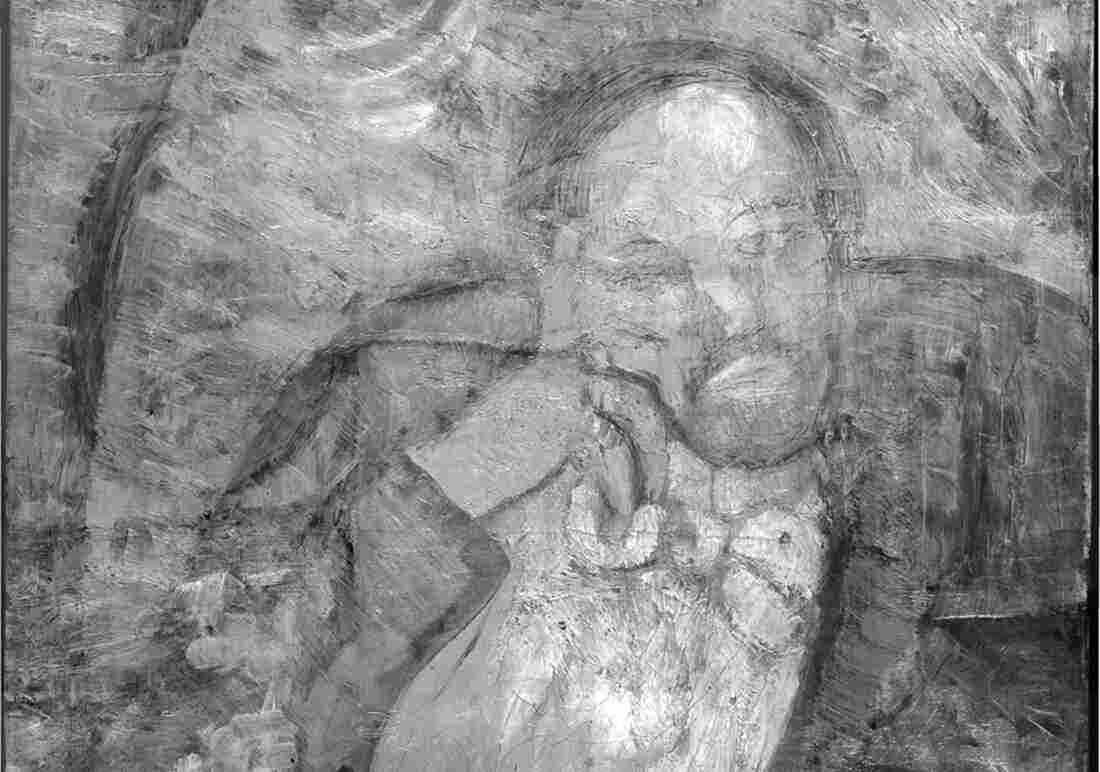 Infrared imagery reveals a bow-tied man underneath the layers of paint that make up The Blue Room. AP hide caption 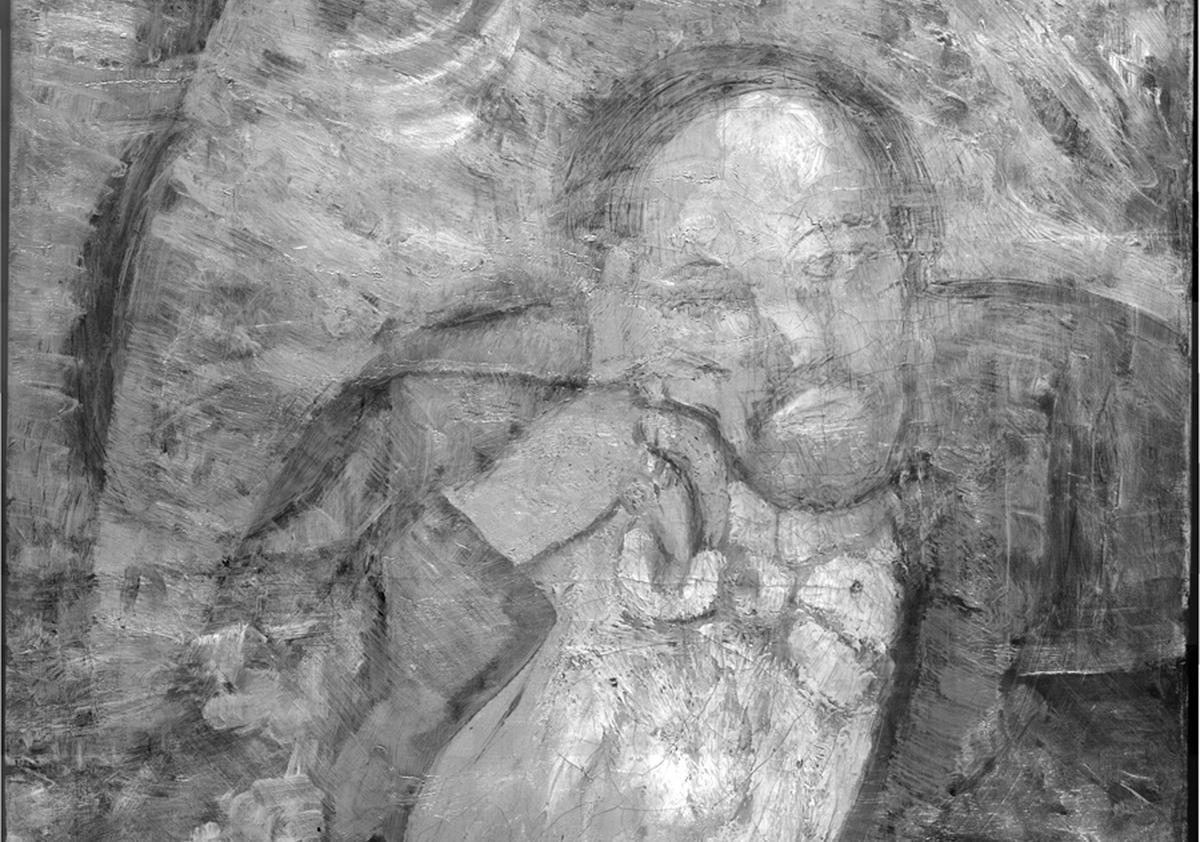 Infrared imagery reveals a bow-tied man underneath the layers of paint that make up The Blue Room.

What's behind the man who is below The Blue Room?

This week, conservators at the Phillips Collection in Washington, D.C., revealed that underneath Pablo Picasso's noted 1901 painting The Blue Room is another painting of a mustachioed man in a jacket and bow tie, resting his face on his hand.

Experts have long suspected something more must be below, as there were brushstrokes that didn't match the composition of the nude, bluish woman. Now, advanced infrared technology has revealed the man with the mustache, who also wears three rings on his fingers. 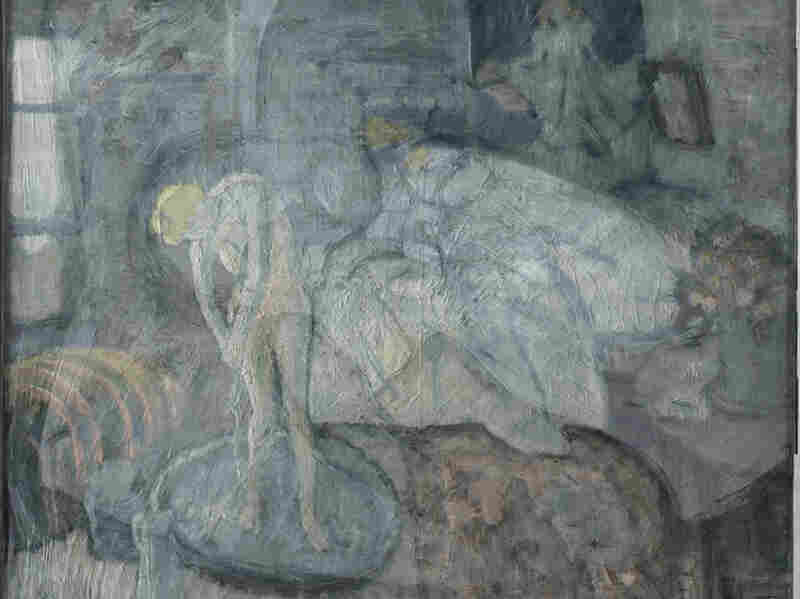 Picasso's The Blue Room, painted in 1901, hung in the Phillips Collection for decades. AP hide caption 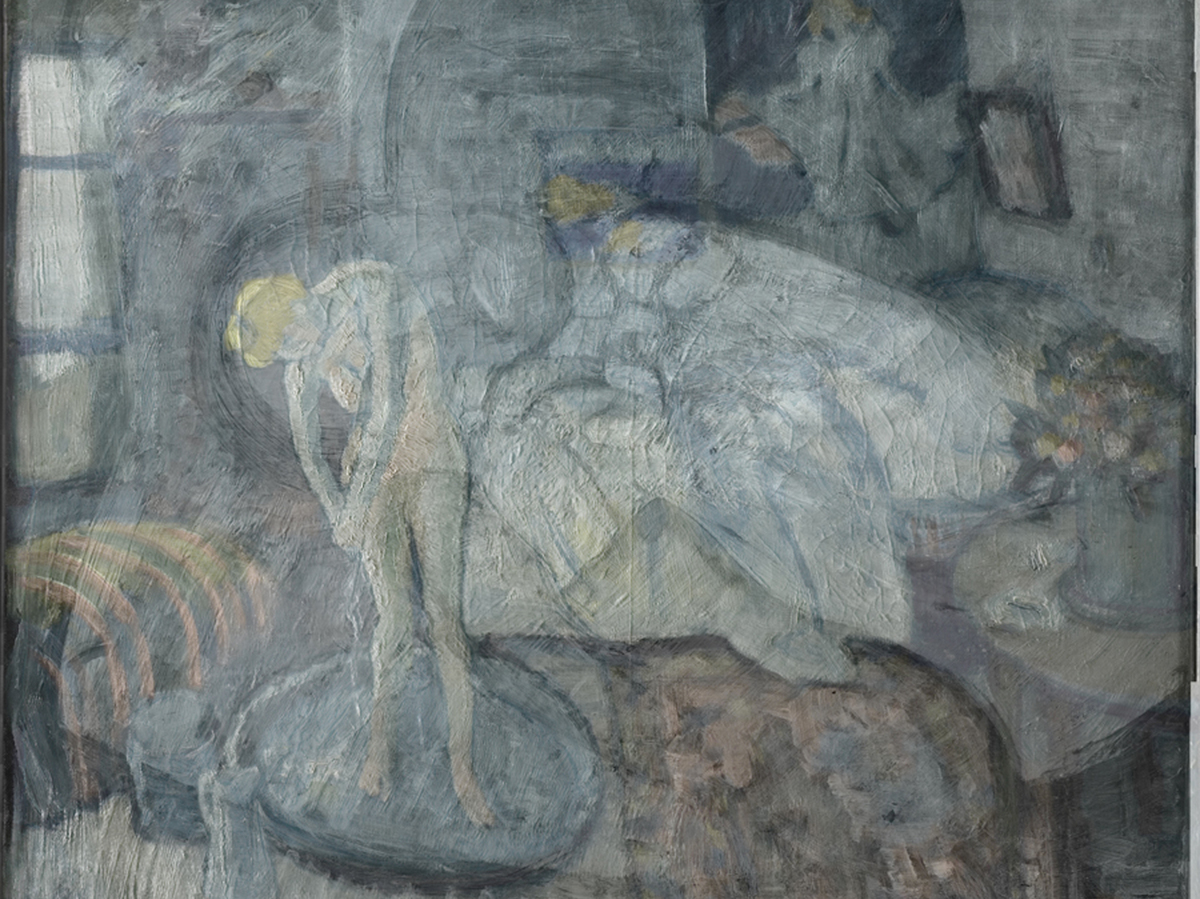 Picasso's The Blue Room, painted in 1901, hung in the Phillips Collection for decades.

Just last May, a Picasso painting of a vase of flowers sold at auction for nearly $7 million. But in 1901, Picasso was down and out in Paris: 19 years old, depressed and painting scenes in shades of mostly blue and blue-green.

Historians now call these four or five years of his life Picasso's Blue Period. A close friend, Carlos Casagemas, had shot himself in the head at a cafe. Picasso walked the streets of Paris, despondent and alone. Where so many other artists saw sun, color and joie de vivre, Picasso found and painted people who were blind or visibly hungry; corpses, cheerless drunkards, neglected beggars and haggard streetwalkers.

In his startling 1904 etching, The Frugal Repast, a blind man sits with skeletal fingers around the bony shoulders of a woman. They are so thin and hungry, you may cringe just to look, and the lone plate in front of them is bare. Or take The Old Guitarist, who appears barefoot, lifeless and gaunt, more holding on to than playing the strings of a guitar. Or are they the last strings of life?

These melancholy blue portraits were not the Paris that people wanted to hang in their salons and hallways. Picasso painted prolifically during his blue period; but these paintings didn't sell. He painted portraits of the poor and was poor himself.

That's the reason why there are partial paintings underneath some of Pablo Picasso's most famous works. Curator Susan Behrends Frank says that in 1901, the man who would become perhaps the most important artist of the 20th century, "could not afford to acquire new canvasses every time he had an idea that he wanted to pursue."

The man with the mustache, underneath The Blue Room is so far unidentified. But this week, he helped remind us how failure and genius can be revealed in the same frame.