Accessibility links
'Hidden Sea': What Happens When Fantasyland Doesn't Want You? In A.M. Dellamonica's new Child of a Hidden Sea, a marine scientist discovers her secret heritage in an alternate, watery version of Earth — a place which adamantly doesn't want to be discovered.

'Hidden Sea': What Happens When Fantasyland Doesn't Want You?

'Hidden Sea': What Happens When Fantasyland Doesn't Want You? 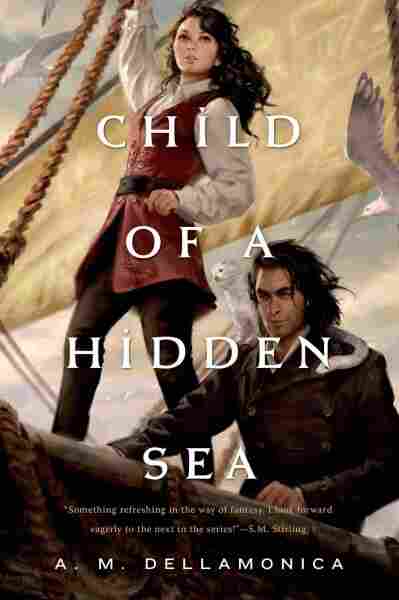 Child of a Hidden Sea

by A. M. Dellamonica

Title
Child of a Hidden Sea
Author
A. M. Dellamonica

Usually when someone steps from our world into a fantasy world, they're one of two sorts of characters. There's the Bookish Outcast for whom the portal fantasy is a literal manifestation of the act of reading as escape — and there's the Chosen One, an otherwise unremarkable or unlikeable character who has a Destiny waiting in the other world. There are of course dozens of variations on these roles, but often portal fantasies are more or less wish fulfillment: we want to escape, to be wanted, to be important or powerful or our best selves.

It's rare and refreshing, then, to encounter a book where the fantasy world and its denizens actively do not want the protagonist, and are invested in keeping them out.

Sophie Opal Hansa is a modern-day adventurer: a 24-year-old marine videographer, dabbler in bio sciences, cave-diver, rock-climber and long-distance swimmer, to name a few of her several interests. Though raised by loving adoptive parents, and though she has a great relationship with her genius gay brother, she longs to know about her birth family — and learns, messily and gracelessly, the extent to which she was desperately unwanted.

Still reeling from the discovery, she unexpectedly foils an attempt on the life of her biological aunt, and in so doing is swept away with her to Erinth, a watery world where everything from language to fauna seems just slant of the Earth she knows. Sophie is eager to document everything about it — but no one wants to speak to her, and her aunt, rather than being grateful for the rescue, demands that she leave, hinting that Sophie's very presence in Erinth will bring misfortune to her kin.

At first I thought Sophie insufferable. There's a bull-in-china-shop quality to her character, and it took awhile for the narrative to acknowledge this instead of just taking for granted that her brashness is an uncontested virtue. I found looking at Erinth through Sophie's probing, cataloging and entirely entitled gaze frustrating and annoying. But the introduction of her brother Bram as foil, the raised stakes of the intrigues around her, and Sophie's own development as a character eventually led me to root for her and better enjoy the book's fantastic world-building.

And it is fantastic: It's suggested that Erinth might be a near-drowned future version of Earth (our modern-day Earth is named Erstwhile by Erinthians), one made up entirely of island nations. There is no single land mass larger than Australia, and the subsequent politics are fascinating: There is a governing force known as the Fleet, an enormous number of ships made up partly of representatives from every island nation that sail, investigate and legislate together.

Magic trumps technology ("mummery," an excellent touch), and is name-based; you can work magic on people by "scribing" them, provided you know their full names. But scribing is subject to legislation as well, and requires special skill and components that further complicate matters of trade.

I also genuinely appreciated approaching a fantasy world through its natural history: its geology, geography and ecology. The attention paid to diving, sample-gathering and documentation was thorough and interesting; the writing that surrounds Sophie's voice often has the muscular precision that I associate with Elizabeth Bear's prose, and in parts I found myself reminded of some of Guy Gavriel Kay's work.

For all that she annoyed me, I really liked the fact that Sophie was an athlete and scientist. It was interesting, too, to see the book's climax be a courtroom scene instead of a big magical showdown, complete with the kinds of introspections, compromises and uncertainties that enrich characters and their relationships.

Ultimately this was a solid, enjoyable book, entirely appreciable on its own while setting up interesting hooks for future installments. As unconventional a portal fantasy as it is, and as much as I warmed to Sophie's character, I'd happily read novels entirely set in the well-built world of Erinth, untranslated by an Erstwhiler's gaze.

Read an excerpt of Child of a Hidden Sea