Space Chases And Explosions On A Galactic Scale In 'Cibola Burn'

Space Chases And Explosions On A Galactic Scale In 'Cibola Burn' 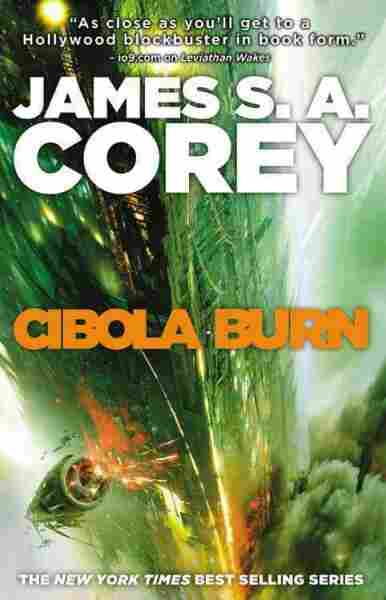 by James S. A. Corey

Cibola Burn is a big book. Huge, really, both in terms of pages (nearly 600 in the version I got), and in pure authorial chutzpah. It is part four in the Expanse series, which has, thus far, included three books and a smattering of novellas. And it represents, for dedicated readers of James S.A. Corey (in real life, the two-man team of Daniel Abraham and Ty Franck) the biggest, most sprawling leap of an already sprawling tale.

Cibola Burn opens a few years after the events of the last volume, Abaddon's Gate. Our own solar system is now linked to a thousand other worlds by way of the Ring — a huge, alien gate that allows travel outside the Sol system and into a larger universe teeming with habitable planets. Where in the previous books in the series, we were constrained merely to our own little celestial neighborhood — a couple planets, a few moons, a bunch of asteroids, starships, wars and rumors of wars — now there is simply ... more.

More of everything. It's a land rush, with settlers already fanning out into alien space and various government bodies struggling to both contain the flood of humanity and deal with the colonists already breathing the alien air on Ilus — closest and most hospitable of the new worlds.

But this is all backdrop, really. The authors start large, on a canvas suddenly stretched to encompass a thousand planets, but quickly narrow down to focus attention primarily on Ilus — on the colonists already there and those in orbit who want them gone. And while this new, nearly limitless world is big, the authors corral it with attention to purely human-scale details.

Corey has a (two-handed) facility with the language of the small and uses it to give an almost comforting provincialism to the tale: Describing a newly (and banally) redecorated office aboard a former battleship turned space station, they write, "Sure, humans had invaded an extra-dimensional space with wormholes to points scattered across the galaxy, but they'd remembered to bring ferns."

And then there's Capt. Jim Holden — Corey's long-standing protagonist and one of a handful of POV characters who move the plot along. Though you'll have a solid chunk of pages in the rearview before he appears, Cibola Burn lights up from the minute Holden steps to the stage as captain of the light frigate Rocinante.

Holden is just one of those magic characters who feels lived in — an immediately recognizable archetype (the ex-military man now making do for himself and his crew) who doesn't appear to know he's an archetype. He is Malcolm Reynolds, Han Solo, or certainly one of their close friends. And honestly, despite one big explosion, several deaths, a shuttle crash and all manner of nefarious activities occurring before Holden makes his first appearance, Cibola Burn only truly takes off once he comes slouching into the tale.

To say anything more would be unconscionably spoilery, but I can say this: Fans of the Expanse series likely already know that it has recently been picked up for several additional books and as a TV series, and you only get that kind of attention as a sci-fi author if you've got a bit of Michael Bay in your DNA.

It takes some time to get there, but the second half of the book is a good payoff for all the exposition and pawn-moving you'll have to tolerate in the first. There are chases. Rescues. Escapes. Stuff blows up. And then, even though Holden has ostensibly been sent to Ilus on a diplomatic mission, even more stuff blows up.

But hey, I'm not complaining. What could've been 600 pages of multiparty talks between competing economic and governmental factions over the legal questions of squatter's rights and planetary eminent domain instead devolves with reasonable speed into betrayal, gunplay and bloodshed — which is precisely what this kind of story is built to do. It isn't space opera in any pure sense. Cibola Burn is a bit too slick for that. In the end, it's more like epic sci-fi — the science fictional equivalent of A Song of Ice and Fire (which is maybe more than a little appropriate, since co-author Ty Franck has also worked as George R.R. Martin's assistant), only with fewer beheadings and way more spaceships.

Jason Sheehan is an ex-chef, a former restaurant critic and the current food editor of Philadelphia magazine. But when no one is looking, he spends his time writing books about spaceships, aliens, giant robots and ray guns. Tales from the Radiation Age is his newest book.