Accessibility links
Movie Review: 'Snowpiercer' Bong Joon-ho's post-apocalyptic tale of the last remnants of humankind trapped on a train to nowhere is the kind of idea-driven science fiction that deserves to be seen.

The Satisfying Chill Of The Audacious 'Snowpiercer'

The Satisfying Chill Of The Audacious 'Snowpiercer' 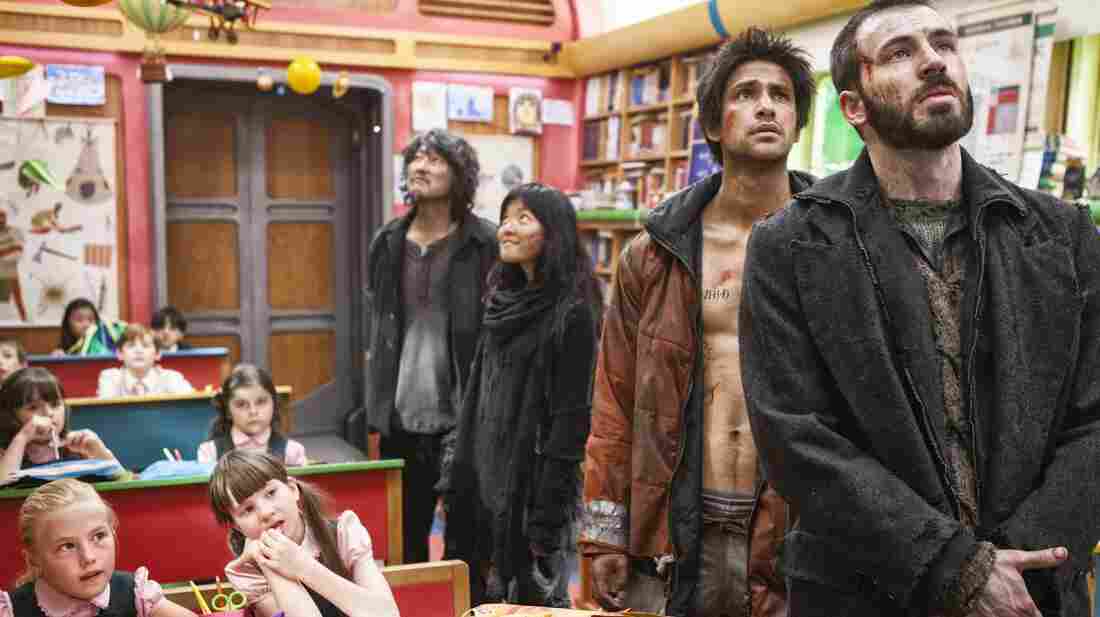 In Snowpiercer, the children of the wealthy who inhabit the front of the train are offered luxuries such as education, while the people who dwell in the train's rear — (from right) Curtis (Chris Evans), Grey (Luke Pasqualino), Yona (Ah-sung Ko) and Namgoong Minsoo (Song Kang-ho) — survive in squalor. Radius TWC hide caption 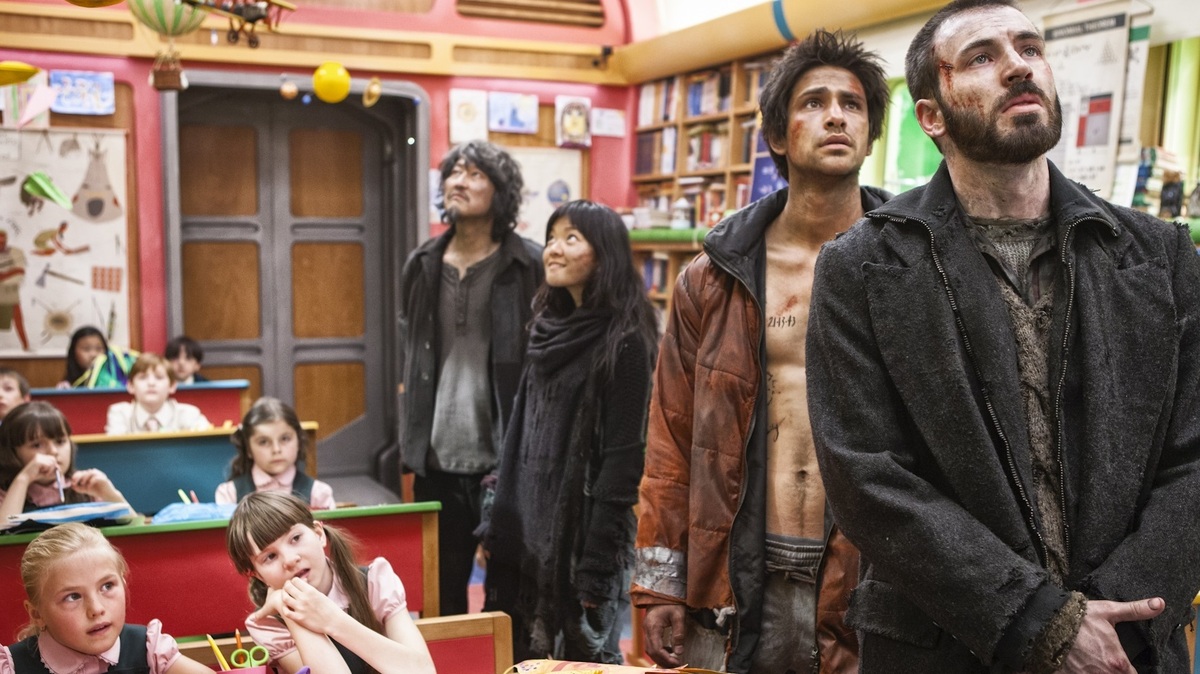 In Snowpiercer, the children of the wealthy who inhabit the front of the train are offered luxuries such as education, while the people who dwell in the train's rear — (from right) Curtis (Chris Evans), Grey (Luke Pasqualino), Yona (Ah-sung Ko) and Namgoong Minsoo (Song Kang-ho) — survive in squalor.

"All things flow from the sacred engine. ... The engine is forever." The passengers on the titular train in Bong Joon-ho's grim, post-apocalyptic sci-fi tale essentially deify the locomotive that is their salvation. This "rattling ark" carries the last remainders of humanity, after an attempt to reverse global warming goes terribly awry, plunging the planet into an extinction-event deep freeze. Extinction for all but those on this endlessly circling, perpetual-motion-driven train that can't stop, or else these few survivors will meet the same fate. When the movie begins, they've been running nonstop for 17 years.

There's nothing subtle about the allegorical implications of this messianic express, nor any of the other metaphors piled up like the ice and snow the train blasts through relentlessly. For the survivors, this technological marvel has become a religion, and as such, dictates appropriate behavior for its acolytes — be they willing followers or not. Science and religion become blurred here, both flawed, but flawed via their filtration through humankind. Even near extinction, humanity finds ways to continue perpetuating cruel class systems and authoritarian oppression of the many to benefit the few.

So it is that those designated poor live in the tail of the train in absolute squalor, sleeping on top of one another and subsisting on gelantinous brown "protein blocks." (The revelation of their contents, while not people, still packs a disgusting Soylent Green-style shock.) They're regularly beaten, arbitrarily tortured, and punished to maintain order. As one moves up toward the front, there are cars for the sick, for prisoners, for water management and food production, eventually leading to opulence and drug-addled decadence upfront.

Curtis (Chris Evans, in brooding, dangerous contrast to his Captain America performances) is a tail resident with a plan to upset the order of things, planning a car-by-car push forward to take control of the engine from its creator and the Snowpiercer's de facto king — a mysterious Oz-like figure called Wilford (Ed Harris). No need to follow the yellow brick road; there's but one way from back to front, and Curtis has a small army of tail section comrades, as well as a trio of more vital misfit sidekicks: Gilliam (John Hurt), a wizened multiple amputee who acts as mentor; Namgoong (Bong regular Song Kang-ho), a sprung prisoner who can hot-wire the doors between cars; and Edgar (Jamie Bell), a hot-headed youth with no memories of life before the train. Their nemesis: a wicked witch of a bureaucrat, Mason, played by Tilda Swinton with blackly comic vigor and a fearsome dental appliance.

The clownish comedy amid dire circumstances is a typical device for Bong, a director who delights in playing games within established genres, from Godzilla-style monster movies (The Host) to detective thrillers (Mother). This foray into post-apocalyptic survival territory is the director's first English-language feature, and it's a pleasure to see many of his idiosyncrasies intact — even if he had to go through a much-publicized battle with The Weinstein Co. to preserve his cut of the film.

That allows for rhythms that feel slightly off-kilter from those of an American action flick, with more attention paid to developing the unusual details of this hermetically sealed manufactured society, a lengthy conversational lead-up to the film's climax, and characters that are far from stock — many even deeply strange, beyond just Tilda Swinton's enhanced overbite. Thankfully, there is also no attempt to hold back for a PG-13 rating; Bong loves artful sprays of blood on train windows and a grisly hand-to-hand combat that feels like it has real impact. Whether or not everyone who dies here is named, no one dies anonymously or carelessly.

There's some evidence of the film's wild ambition slightly outstripping its grasp: The complexity of all the plot's moving parts makes for some muddled details in the climactic moments, and the CGI of the train's exteriors often comes off as extremely shoddy, as if money ran dry before the film got to the digital artists. But very little happens outside. The interior, meanwhile, is a triumph of design, first in the claustrophobic industrial nightmare of the rear of the train (John Hurt's character's name is likely no coincidence, as a great debt is owed to Terry Gilliam's dystopic visions), and then in the mishmash of 20th and 21st century luxuries in the front.

Idea-heavy science fiction hasn't exactly been burning up the box office lately with films like Edge of Tomorrow and Transcendence. Snowpiercer's limited release isn't going to do much to change that, but this is exactly the sort of ambitious, audacious and uncompromising filmmaking that deserves to be seen.