Accessibility links
'Rogue Elephant' Asks: Is Democracy Right For India? Journalist Simon Denyer has been covering India's tumultuous political scene for most of the past decade. He tells NPR that Indian voters are tired of government corruption — but not of democracy. 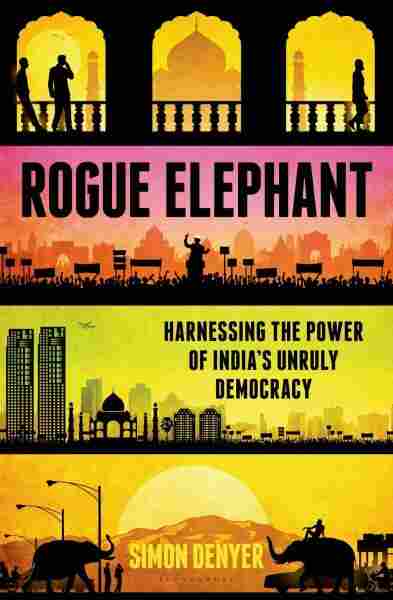 Over the course of the past month, some 600 million Indians went to the polls to elect a new government — the largest exercise in democracy in the world.

The results surprised few: Discontented voters tossed out the ruling Congress Party and Prime Minister Manmohan Singh. Congress, which has controlled India much of the time since its independence in 1947, has now been reduced to a parliamentary remnant.

Singh's decade in power was, toward the end, marred by massive corruption scandals and large-scale protests over women's rights after a young woman was raped on a moving bus in New Delhi. A slowing economy and rising prices sealed his government's fate.

The man who replaced him is Narendra Modi, leader of the Hindu nationalist BJP party. Modi positioned himself as the opposite of the weak and dithering Singh, a move that paid off: The BJP is the first party in 30 years to win an absolute majority in the Indian government.

Modi has a record of economic success in the state of Gujarat, where he was chief minister for 13 years — but that record is complicated by the anti-Muslim violence that broke out in 2002, leaving some 1,000 people dead.

Reporter Simon Denyer has spent much of the past decade chronicling the aspirations and discontents of an urbanizing and modernizing India, first for Reuters and then for The Washington Post, and he has turned his experiences into a book, Rogue Elephant: Harnessing the Power of India's Unruly Democracy.

Denyer says Indian voters originally thought of Singh as someone who wasn't corrupt and would provide solid economic leadership. "One of the great tragedies is that a man who could sort out the economy and who wasn't corrupt presided over a government that completely mismanaged the economy and was desperately corrupt," he tells me. "I think that India, after 10 years of Singh, needed somebody who stood for governance, somebody who stood for decision making and somebody who had a force of personality." More from my interview with Denyer:

Is this voter frustration limited to the mismanagement of the Singh government — or is it a sign of something deeper and more systemic?

A Look At India's New Leader, Through The Lens Of Literature

I just think that the middle class at least — which thought it could bypass politics, thought all it needed was for the government to get out of its way — also realized that it wasn't enough; you needed a government that could govern, provide electricity and law and order and keep corruption in its place.

Let me give you an example: A man came up to me at the anti-corruption protests and said that "the first thing I did for my son was to pay a bribe to get his birth certificate." He was genuinely demeaned by that. He got the certificate — it wasn't a huge amount of money — but it was not how he wanted to behave in his life. And I feel people genuinely felt enough was enough.

The title of your book — Rogue Elephant — brings a very specific image to mind: an elephant that has gone on a rampage, stampeding over people. Is the elephant in your title the Indian state?

It's the Indian state and democracy combined, actually. There is this energy — but you look at what's happening, and an awful lot of people are being trampled underfoot. Look at the reality of poverty in India; it isn't a statistic. Poverty in India is people dying, children dying, people dying young. Those are people whose lives are being ruined by the inability of the state to deliver, to act in any controlled kind of way.

Now I think what democracy has done is it has helped to create a nation out of many different communities speaking many different languages extraordinarily well. But now it has to do more; it has to stop people being trampled underfoot, has to stop that elephant from going rogue.

But it makes me wonder — Indians have just gone to the polls and elected a strong leader, given him an overwhelming majority. Are Indians a little frustrated with democracy?

Yes, there is frustration with the failures of democracy — and polls might show that young people want a dictator, or something more like China — but I fundamentally believe that the values of democracy are so deeply embedded in the Indian psyche now that that expression is now an expression of correction rather than a lack of faith in democracy. I think Indians are deeply wedded to the concept of freedom of speech and the idea of "The Argumentative Indian," you know. [Amartya Sen, in his book of the same name, argued that India's argumentative tradition was key to the success of its democracy.]

All I will say is that democracy has united India and will save India: The power of the people to speak, to ask questions and to throw people out of office, it gives me great hope.