Accessibility links
'They Came Together' Is Less Than The Sum Of Its Parts The romantic comedy parody They Came Together has an impeccable pedigree full of really funny people. But its attempts to mock generically likable films feel strangely generic themselves.

'They Came Together' Is Less Than The Sum Of Its Parts

'They Came Together' Is Less Than The Sum Of Its Parts 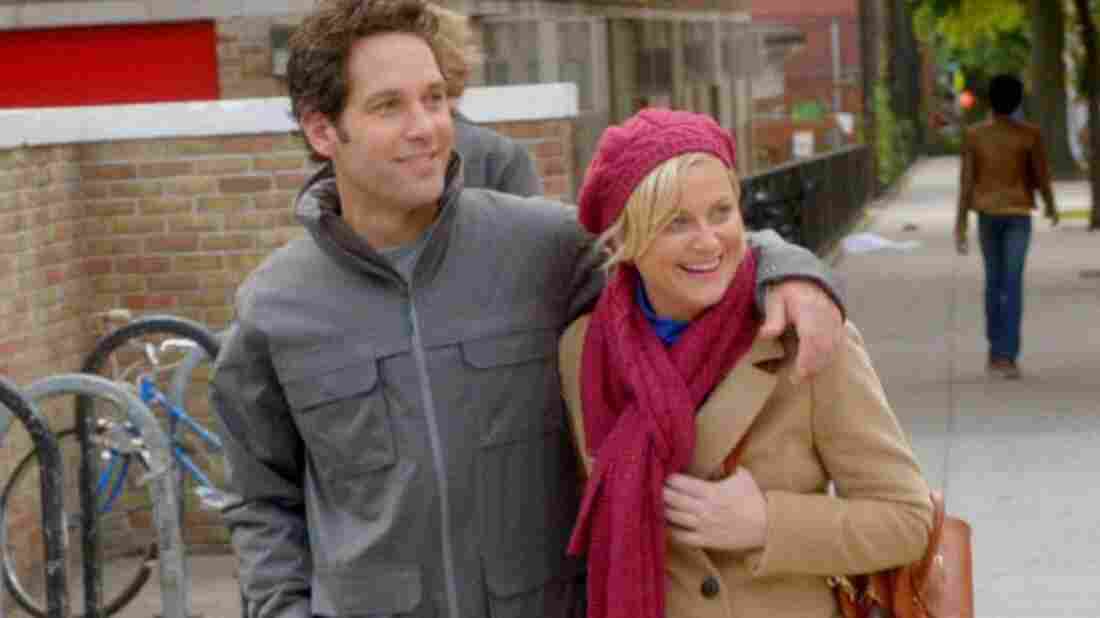 Paul Rudd and Amy Poehler play a couple, sort of, in the underwhelming rom-com parody They Came Together. Lionsgate hide caption 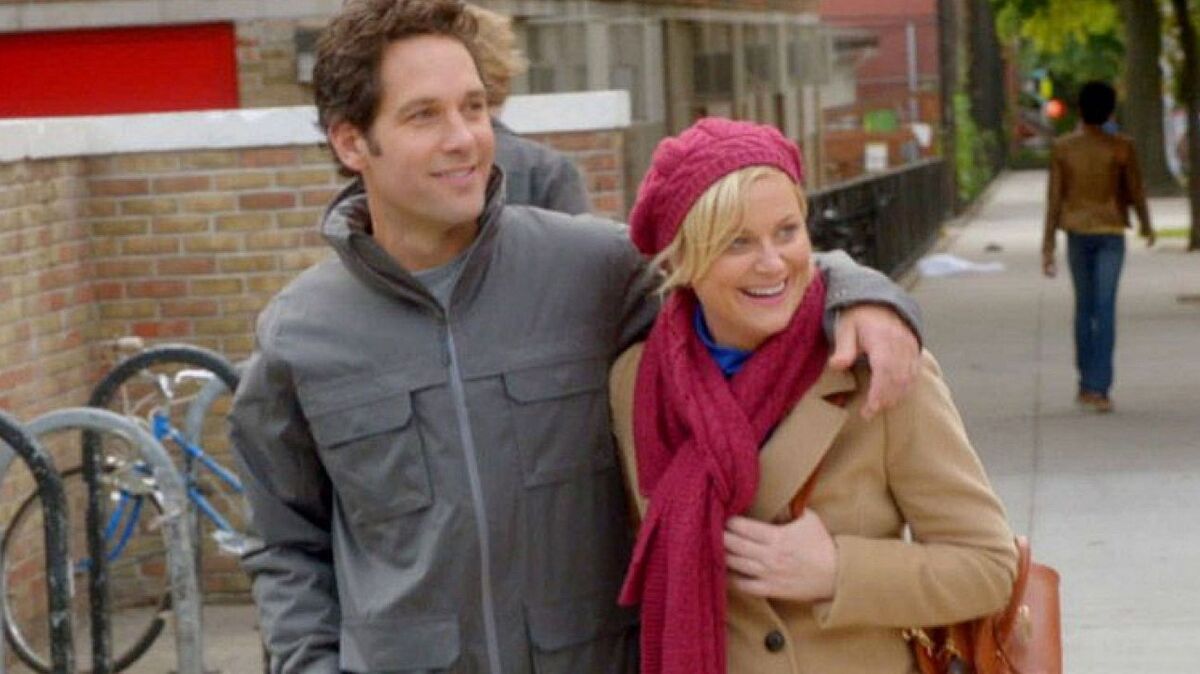 Paul Rudd and Amy Poehler play a couple, sort of, in the underwhelming rom-com parody They Came Together.

Writer-director David Wain is at the center of a loose comedy collective that's been working together (and cross-pollinating with other similar unofficial collectives) since The State, which was the name of both the original comedy troupe and the MTV sketch comedy show they held down from 1993 to 1995. The stars included Michael Ian Black, Michael Showalter, Thomas Lennon, Joe Lo Truglio, and Ken Marino. Much of that team got back together in 2001 for the summer-camp-movie parody Wain directed and co-wrote with Showalter called Wet Hot American Summer. It also starred Janeane Garofalo, David Hyde Pierce, Paul Rudd, Amy Poehler, Bradley Cooper, Molly Shannon, and Christopher Meloni. Remember, this was 2001.

Guy gets good and funny people together, is my point.

But the most direct antecedent to Wain's new They Came Together is probably Burning Love, the Web series turned TV series that involved much of the troupe but not Wain himself. Burning Love is a spot-on spoof of The Bachelor, made with loving attention to detail, resulting in the kind of satire that can only come from an encyclopedic, almost obsessive, knowledge of the target.

They Came Together begins with Rudd and Poehler, playing Joel and Molly, having dinner with their friends (underutilized funny people Bill Hader and Ellie Kemper) and recounting how they met and how it was just like a corny romantic comedy. This is a mistake, probably — it's better to be a send-up than it is to announce yourself as a send-up, and something about that framing device seems instantly not confident, as if they're afraid you won't get it.

And "it" is an extended riff on romantic-comedy cliches, taken largely from the Ephron-driven boom of the late '80s and early '90s. There are specific sendups of You've Got Mail (which seems to be the most familiar film to these particular filmmakers), When Harry Met Sally, and Pretty Woman. Anything more recent than that seems to not be quite on their radar.

The problem with They Came Together is that what it settles on as the parody-able thing about romantic comedy is how generic it can feel. So you get the familiar bland montages and the familiar bland dialogue, and yes, you get the section where the woman is trying on clothes while a friend either gives thumbs-up or thumbs-down. But these send-ups, in fact, feel generic themselves. The dressing-room business has been spoofed many times in the past with more verve, as has the montage of romantic moments. All of this is correct, in terms of all of these segments and tropes being very real, but none of it is particularly funny. What they've found here is the difference between identifying and reproducing a cliche on the one hand, and doing something inventive with it on the other.

That's particularly important when the cliches you're identifying feel this nebulous. The best bits in the film come when it's satirizing something very particular — as in a sequence in which Joel and his screw-up brother (Max Greenfield) keep stopping each other right before they walk out of a room. What works less well is the effort to take general aim at the idea of people meeting cute and then bickering, for example. Yes, that happens. Yes, it's a trope. But just having Poehler and Rudd meet cute in a generic and dull way doesn't really work as comedy; it seems generic and dull instead.

(And the devil, it must be said, is in the details: There are two scenes that seem to be shot hand-held, which drove this particular fan of this genre to scoff, "They would never, never do this in hand-held except in a twee indie rom-com, which is an entirely different kettle of ukuleles.")

The final 10 minutes or so begin to show a little more vibrancy, as the film becomes the weird, surprising thing it seems to want to be, with its sketch-comedy and improvisational DNA showing a little more. (Great cameos too, including one that seemed to be there for absolutely no reason, which is perhaps the best reason of all in this kind of film.)

But for much of the time, I felt like I was watching people slap at old Nora Ephron movies based on having seen them a long time ago and having developed a hardened sense of what they are and what about them is worth making fun of. They're not doing much more here than Jason Segel and Rashida Jones did in the fake movie Justin Timberlake and Mila Kunis are watching in Friends With Benefits, but it's a lot longer.

The producers of Burning Love were at the Television Critics Association press tour last summer, and I asked them about making such a brutal parody of The Bachelor based on what was obviously ... a lot of familiarity with The Bachelor. And they embraced that: They both loved and hated it, couldn't keep away from it, but couldn't stop making fun of it. That's what I hoped for from They Came Together: people who know their romantic comedies inside and out, getting at the silliest of details. What I got was quite a bit more uneven than that, although I am not the first and will not be the last to note that I'd certainly line up for an actual romantic comedy with Paul Rudd and Amy Poehler in it.