Accessibility links
In Paris, Training Wheels For The Littlest Riders Paris streets are often too dangerous for kids to learn to ride, and most parents have no room to store bikes in their apartments. So the city has started renting bikes for the smallest Parisians. 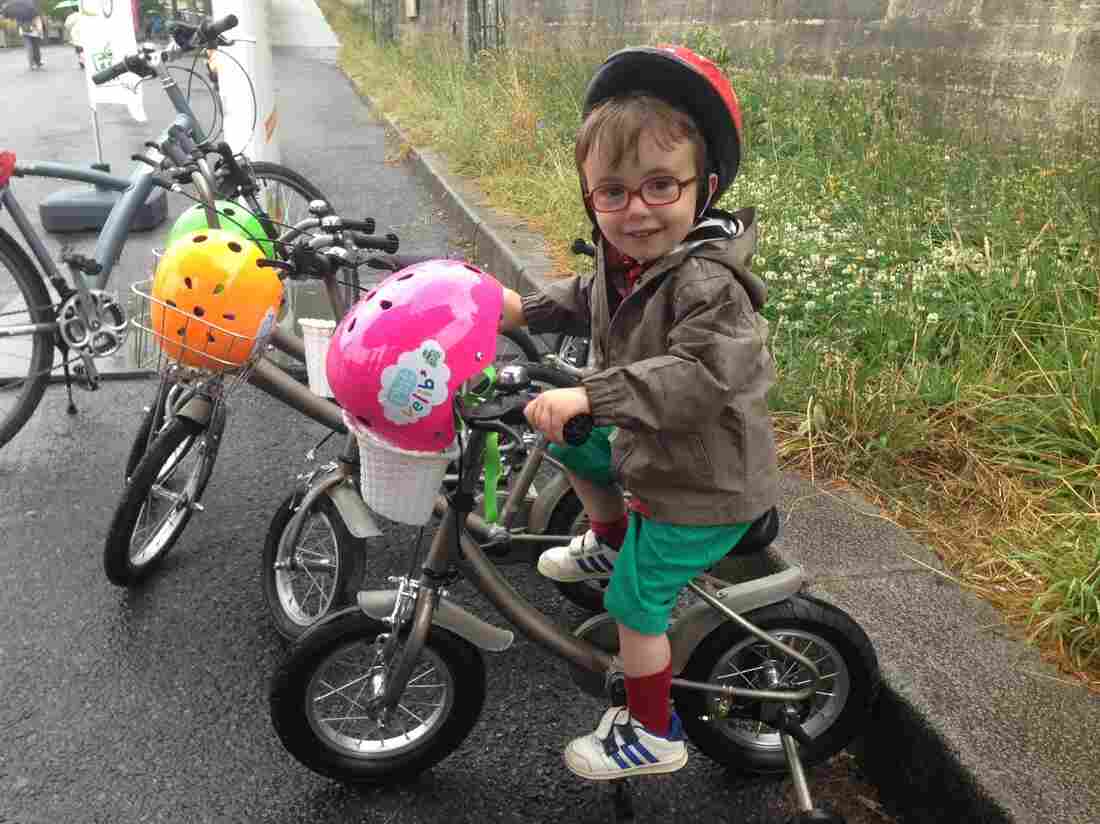 Not quite 3 years old, Oscar Bayeda is just learning to ride with the help of P'tit Velib's bike-sharing program for children. Eleanor Beardsley/NPR hide caption 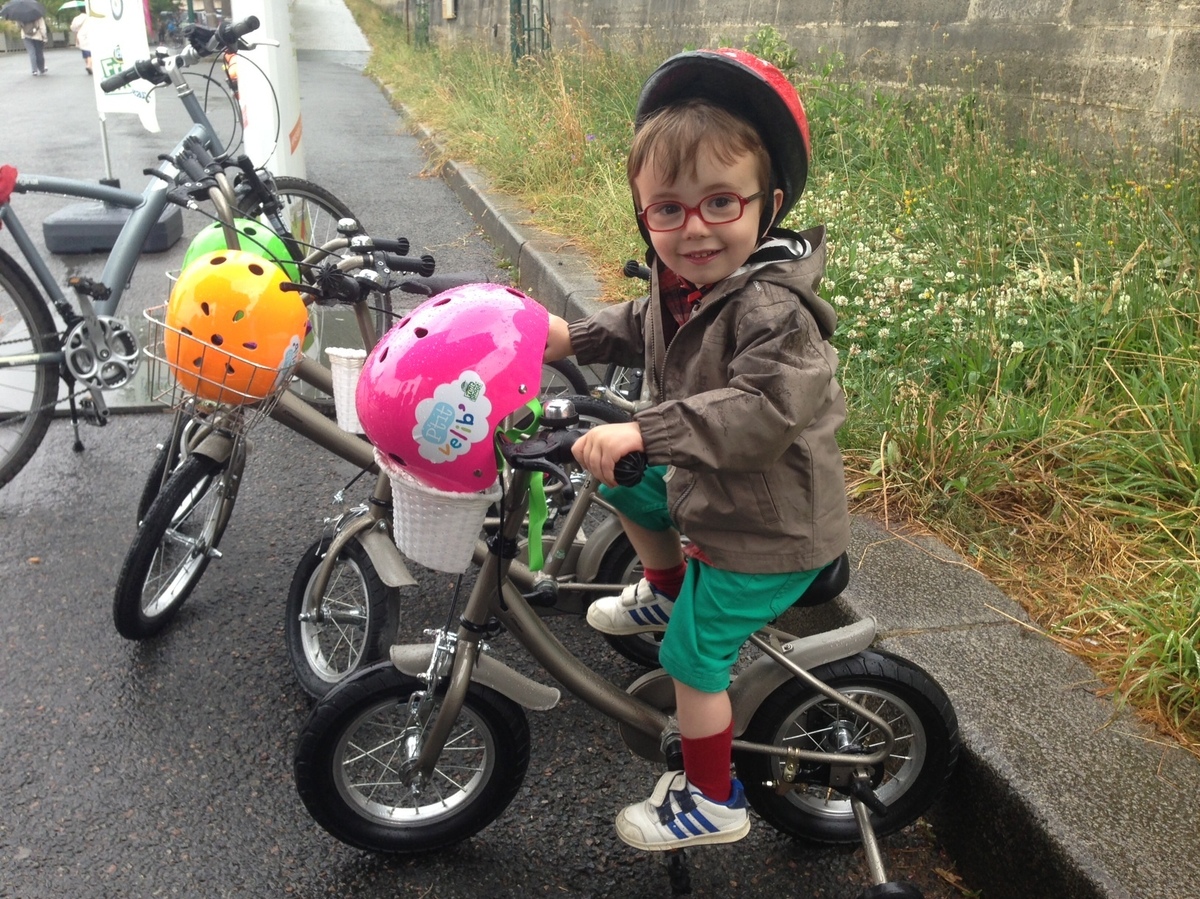 Not quite 3 years old, Oscar Bayeda is just learning to ride with the help of P'tit Velib's bike-sharing program for children.

A bike rental scheme in Paris that began seven years ago has been such a success, the city has launched a version for children. Parents can now rent bikes for tots up to 8 years old at locations across the city.

The original, adult enterprise is named Velib, which stands for velo — or bicycle — Liberte. It's been such a success that there are high hopes for its little successor, P'tit Velib.

Along the banks of the Seine, at a mile-long stretch known as Les Berges, no cars are allowed. Only barges and sightseeing boats ply the river. That's where P'tit Velib concessionary Joel Sick has set up his rental stand.

Sick's collection of 40 shiny new velos come in three different sizes, along with a training-wheel option. The smallest, called a hobby horse, has no pedals at all. Sick says it allows 2-year-olds to push themselves along and develop their balance. 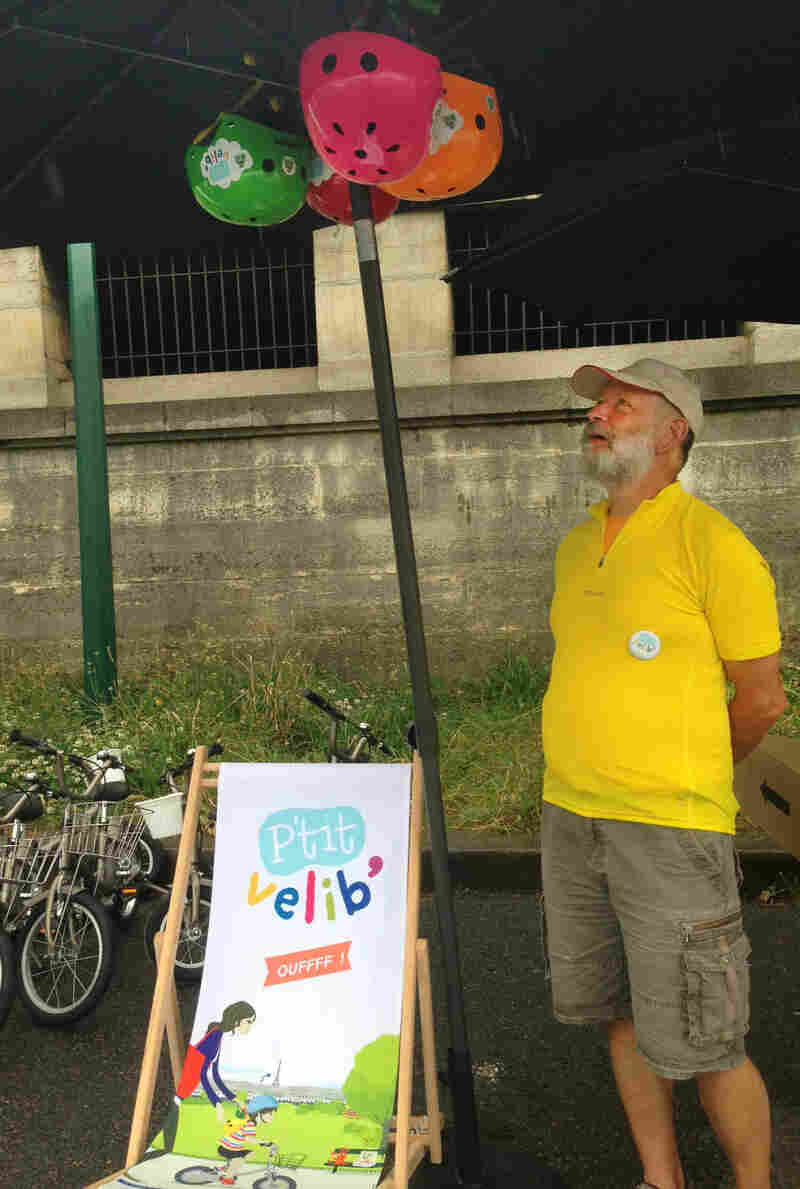 "In Paris, people don't usually have kids' bikes," Sick says. "They keep them at their country house, if they have one. And if you have several kids, you can't fit all the bikes in your apartment. So this rental scheme is really meeting a need."

When school's out for the summer next week, Sick plans to give bike lessons. But today, in the gray Paris drizzle, he wonders if anyone will show up.

"It's a great idea. We looked for you and found you," says Herminie Nougaret, 70, who has brought her 6-year-old godson, Omar Tall. Despite the weather, Nougaret says she wants Omar to be able to ride with no cars around.

P'tit Velib has five rental locations around the city, all in secure, spacious places: the river, the canal and at the city's biggest parks.

"For little Parisiens and little tiny Parisiens, it's very hard to find a safe place to learn how to ride the bicycle, because the streets are dangerous," says Jean Francois Martins, Paris deputy mayor for sports and tourism.

Martins says it's also about building an environmentally friendly city for the future.

"If we can make the bicycle like a reflex or something very natural, even when you're young, it will be for the next generation," Martins says.

Because an advertising firm is involved in the scheme, rental prices are affordable for customers — 4 euros per hour, 7 euros for a half-day and 10 for the whole day — and it costs the city nothing.

Oscar, nearly 3 years old, arrives back at the stand to return his bike with training wheels. His mom, Sonia Bayeda is thrilled.

"It's the first time he has the opportunity to ride on a real bicycle, so we're very happy with that idea of the city of Paris," she says.

"I think this is [a] sign they don't have so many new ideas," he says. But Oscar seems sold on it.

"I love the little bike with the pink helmet," he says, running over to get on his P'tit Velib.