Accessibility links
Book Review: 'The Care And Management Of Lies' By Jacqueline Winspear Jacqueline Winspear — author of the Maisie Dobbs mysteries — tackles the anniversary of World War I with a standalone novel following four intertwined, war-scarred lives, at home and in the trenches.

A Primer On The 'Care And Management' Of Hope In Wartime

A Primer On The 'Care And Management' Of Hope In Wartime 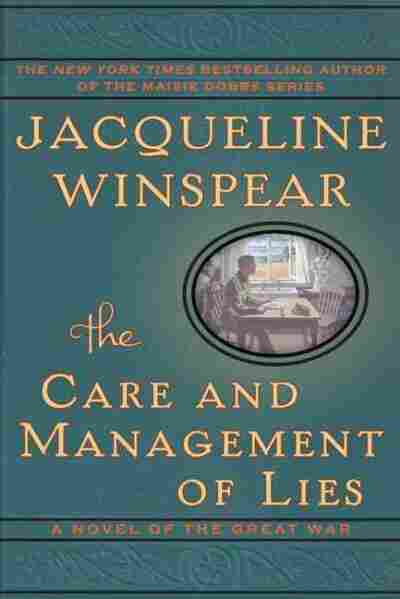 The Care and Management of Lies

A Novel of the Great War

If you're a fan of the Maisie Dobbs series — and if you're not, I highly recommend you give them a chance — you already know that Jacqueline Winspear has a formidable command of the history of the Great War, and a stunning ability to take some of the most amazing and horrible aspects of that era and bring them home.

In other words, she is a master of taking grand ideas and winnowing them down to a very small, individual story that carries the punch of huge and visceral truth. Of course, there is always another meaning to that phrase, the one that refers traditionally to soldiers, the sons and lovers, no matter the war, no matter the battlefield: "Bring them home."

It's clear that Winspear is fascinated by the ambiguities of war — and specifically World War I, so I was eager to pick up her new stand-alone novel commemorating the 100th anniversary of the war's beginning. And what Winspear does, brilliantly and poignantly, in The Care and Management of Lies, is to bring home the enormity of the war by making it personal through the intertwined experiences of four people.

At the heart of the novel is parson's daughter Kezia, who falls in love with farmer Tom, the brother of her best friend, Thea. But the war breaks out just after Tom and Kezia marry — and he enlists, leaving her to run the farm. She, meanwhile, finds comfort in the home and hearth rituals that elevate her day-to-day existence. Even when she can't find the energy or resources to cook a full meal, she is determined to do her best to keep up Tom's morale by writing to him about her imaginary creations, and sending him the occasional treat.

Tom lives for Kezia's long, detailed letters, filled with descriptions of the scrumptious dinners she creates for him. His captain, Hawkes, back home a wealthy neighbor of Tom's, monitors all the mail — and finds himself entranced by Kezia's letters. Meanwhile, Thea is feeling abandoned and estranged; she dabbles in the suffragist movement, then becomes a pacifist, and finally volunteers to drive an ambulance at the front.

For everyone at the front, Kezia's letters are a taste of home. They provide comfort and inspiration — urging Tom and Thea and Hawkes to be the slightest bit more noble, more hopeful and more mindful of right and wrong. Yet, in the end, evils both small and large will accumulate, and no one will escape the war unscathed.

Everything changed in 1914: The world order, the place of women, rigid class distinctions — and conflict wasn't confined to the trenches. On the home front, government and society struggled with suffragists, pacifists and conscientious objectors — those who challenged the status quo were met with breathtaking brutality.

The scope of loss and savagery during the Great War is so huge, it's almost incomprehensible. And while there are plenty of history books and novels you can read that will give you glimpses of its grim reality, this book examines the home front and reflects a sense of hope. Kezia's choice to face a difficult life with optimism and cheer carries hope forward, touching everyone around her.

Winspear knows the history of the war that changed the world. In The Care and Management of Lies, she's telling us the story, she's bringing it home. Beautifully, tragically, indelibly.