Accessibility links
Hiring Looks Good Now, But Wage Growth Lags The improving labor market in June did not translate into significant pay hikes. Wages were just 2 percent higher compared with a year ago. Consumer prices have been rising at a 2.1 percent rate. 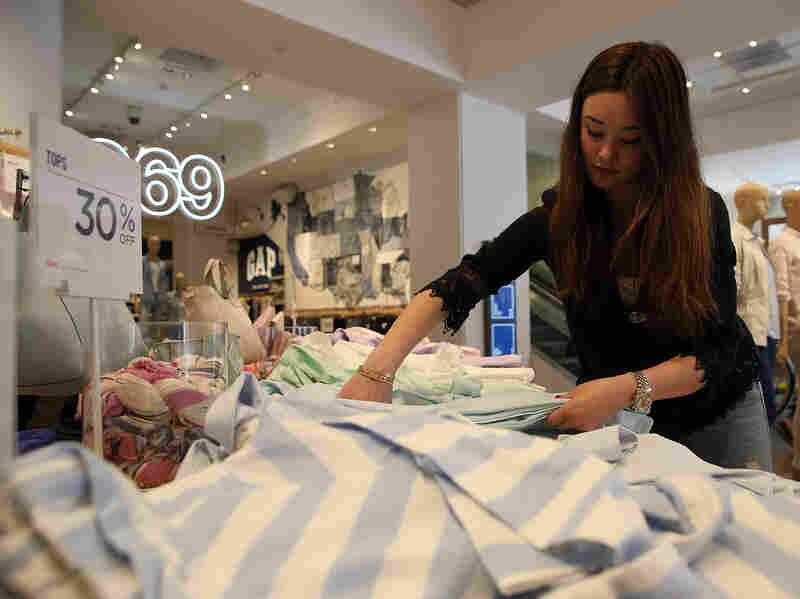 A Gap employee works at a store in San Francisco. The company plans to raise its minimum wage in phases to $10 an hour by next year. Justin Sullivan/Getty Images hide caption 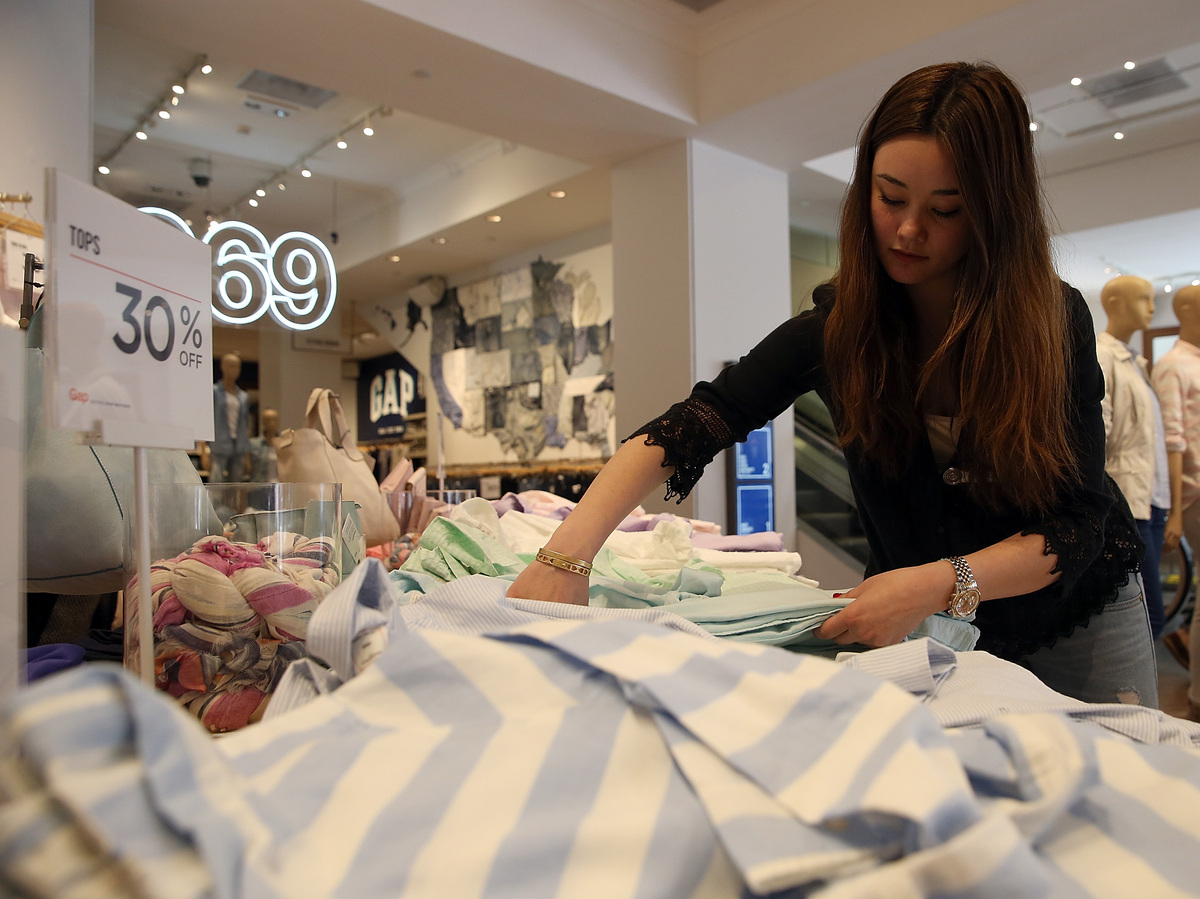 A Gap employee works at a store in San Francisco. The company plans to raise its minimum wage in phases to $10 an hour by next year.

Unfortunately, the jobs report also contained sobering news for people who already have jobs: All of that hiring is not translating into wage hikes. The average hourly wage was $24.45 — just 2 percent higher in June compared with a year ago.

During the past year, consumer prices have risen 2.1 percent. So even in this much healthier economy, with its strong corporate profits and record-setting stock prices, workers are still losing buying power.

President Obama noted the problem while speaking Thursday in Washington at 1776, a tech startup incubator. First, he applauded this year's hiring surge, which has pushed the unemployment rate down to 6.1 percent from 7.5 percent last June.

"We've seen the quickest drop in unemployment in 30 years," Obama said of that 12-month period.

But then he added: "We still have not seen as much increase in income and wages as we'd like to see."

So why aren't workers getting a bigger slice of the growing pie?

When the Great Recession hit in late 2007, employers started slashing jobs, eventually sending the jobless rate to a 10-percent peak. The recovery began in mid-2009, but the climb back has been slow and precarious, making companies reluctant to hire.

And the large pool of unemployed people made it easy for companies to attract and retain workers without having to pay more. At the same time, Congress refrained from raising the federal minimum wage, which has held steady at $7.25 an hour since July 2009.

Economist Bernard Baumohl, with The Economic Outlook Group, wrote that another factor has been restraining wages: competition for the enormous pool of workers around the world.

"U.S. firms have never been more integrated in the global economy and have never faced more pressure to be price competitive," he said.

IHS Global Insight economist Doug Handler said that so far, U.S. employers have been able to expand their businesses without paying more. "Today's report provides no broad-based evidence that wage growth is accelerating," he concluded.

But even if they aren't paying more, companies are hiring, especially to fill jobs that can't be sent overseas. So the biggest gains are showing up in classrooms, hospitals, restaurants and warehouses. In all, employers added 288,000 jobs in June, the Labor Department said Thursday.

June's hiring surge wasn't a fluke. The country has enjoyed five straight months of job creation in excess of 200,000 — something that hasn't happened since the good-old days of the late 1990s. Since the start of the year, employers have added 1.4 million jobs.

Now the jobless rate is down to the lowest level since September 2008, and the labor force participation rate — the percentage of working-age people in the labor market — is holding steady at 62.8 percent after years of decline.

So employers are whittling down the supply of potential workers. Over the past year, the number of unemployed people has fallen by 2.3 million, down to 9.5 million.

That shrinking supply of labor may at last force employers to pay more to persuade discouraged workers to return to the job market.

Hints of what's to come are starting to appear. For example, Gap Inc., with 65,000 U.S. employees, said recently that it will raise its minimum pay in phases to $10 an hour by next year. Ikea, the home furnishings company, said it would raise its minimum wage to $10.76 an hour starting Jan. 1.

At the same time, many state and local governments have been taking steps to push up wages in coming years. More than 20 states have started raising wage floors in steps. Cities also are getting into the act. For example, Seattle's City Council voted unanimously last month to raise the minimum wage there to $15 an hour in phases over seven years.

Such raises may be especially needed now that gasoline prices are rising. The U.S. Energy Information Administration says that this week, the national average retail gasoline price is $3.70 per gallon. That's 20 cents a gallon more than last year.

"The stark reality remains that Americans are still not seeing much purchasing power, and unless we see a more meaningful acceleration in incomes the next few months to offset higher inflation, a slowdown in consumer spending (and thus economic activity) is inevitable," Baumohl wrote.