Accessibility links
Even Broadway Has Its B-Sides Sheldon Harnick, the lyricist of Fiddler on the Roof and Fiorello!, wrote dozens of songs for those shows and others that never saw the stage. 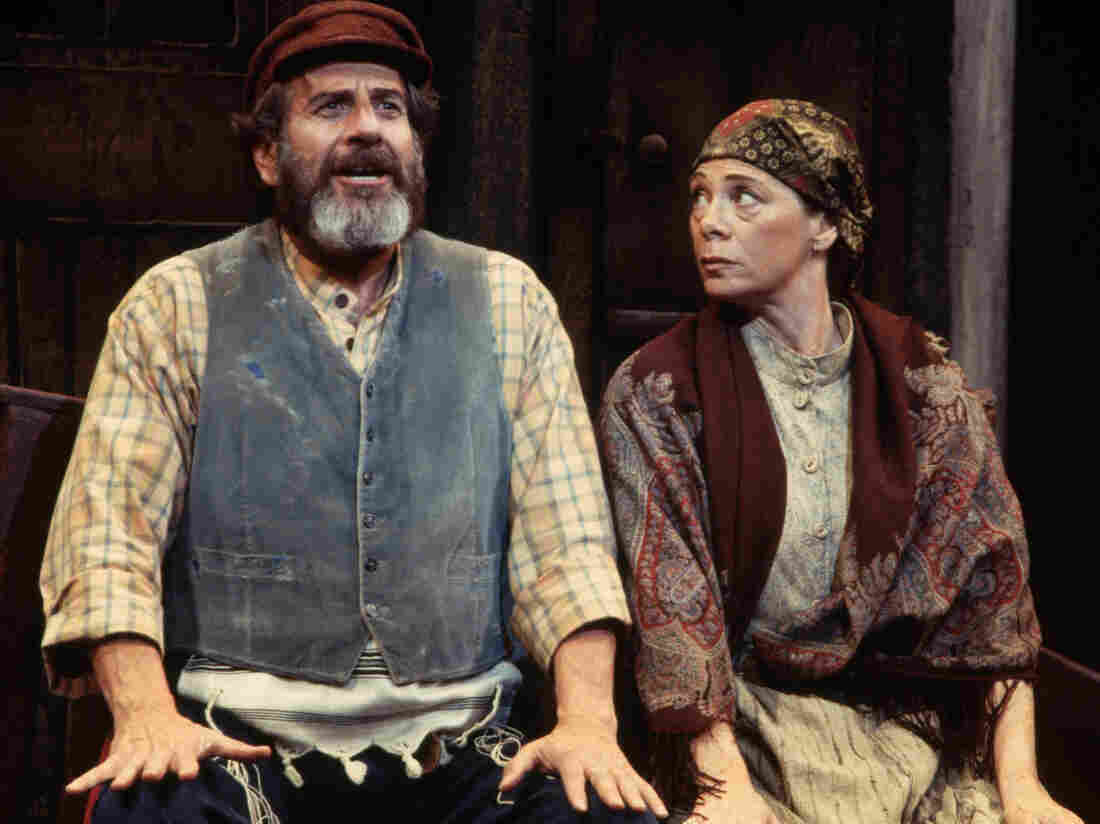 A scene from the 1994 London revival of Fiddler on the Roof. Robbie Jack/Corbis hide caption 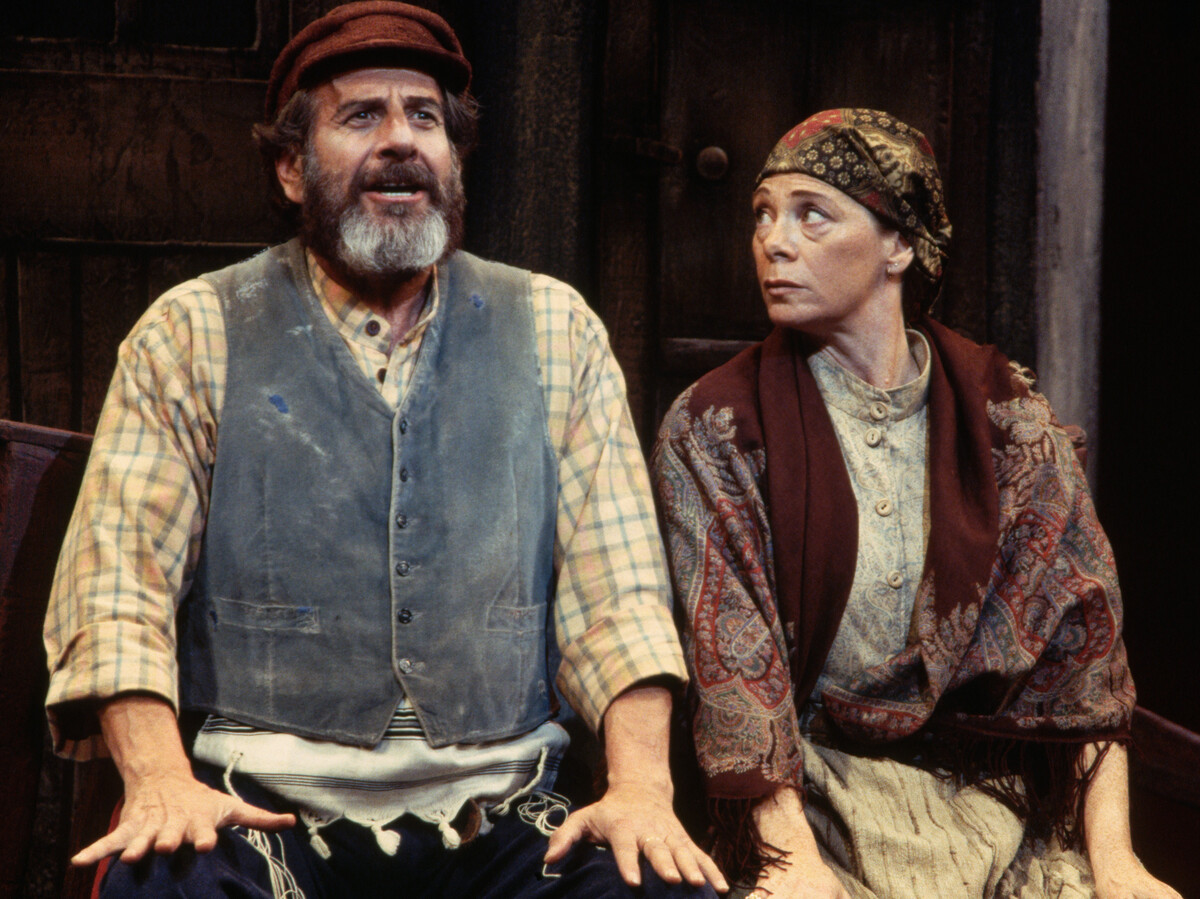 A scene from the 1994 London revival of Fiddler on the Roof.

Sheldon Harnick has been a working lyricist for over 60 years. He shared a Pulitzer Prize for his work on the musical Fiorello! and a Tony Award for Fiddler On The Roof. But he says a career in the theater means writing some songs that, for whatever reason, don't make the show.

"Sometimes, the song was changed because a scene was changed and it no longer accommodated the song," Harnick says. "So, sometimes there had to be a new song."

Sheldon Harnick: Hidden Treasures, 1949-2013, a new two-CD set of rare or previously unheard songs written by Harnick, was released this spring, just in time to celebrate the songwriter's 90th birthday. The compilation is a showcase songs that ended up on the proverbial cutting room floor — like "'Til The Bootlegger Comes" from Fiorello!, which appears as a demo recording featuring Harnick and writing partner Jerry Bock. Harnick says he and Bock loved the song, and audiences loved it during the show's pre-Broadway tryout, but then the two met with Fiorello!'s co-author and director.

"George Abbott said, 'I don't like the scene that that's part of. I want to change that scene and part of the change will mean we're gonna lose the song.' Which was heartbreaking, 'cause the song was working wonderfully," Harnick says. "But it led to the creation of another song, 'Little Tin Box,' which was as good, if not better."

Ken Bloom co-produced the new collection. He says Harnick is a master craftsman. 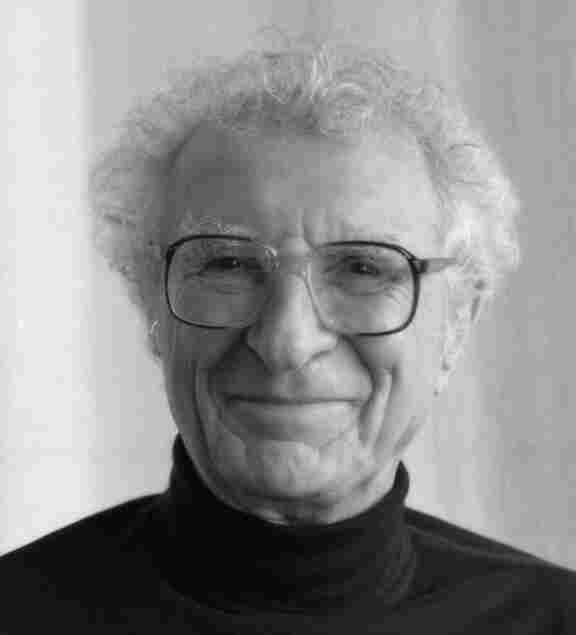 "Sheldon is a really witty writer. He's really smart; he knows how to do it," Bloom says. "But, as opposed to other writers, his wit and his invention is not the purpose of the song. He's not showing off — he's still writing for character. And if you listen to all these CDs with different characters singing, the lyrics fit the language of that character."

Harnick says every song he writes is for a specific character in a specific situation.

"Part of my talent as a lyricist," he says, "is that I believe I think like a playwright, in terms of character, so that I can find different diction, different voices for the different characters."

So Harnick's lyric for "A Butcher's Soul," a song sung by Lazar Wolf, the butcher in Fiddler On The Roof, is particularly meaty — but Fiddler's director, Jerome Robbins, had to cut it.

"Jerry Robbins loved that song, but he said 'Fellows, I have to disappoint you. What it does is put the focus in the scene on the butcher and it mustn't be," Harnick says. "It has to be on Tevye and his problem, so we have to lose that song.'"

The song got replaced by "To Life! (L'Chaim)," with the lead character of Tevye, played by Zero Mostel, front and center.

Harnick says he and Bock basically wrote three or four songs for every one that made it into a show. The original opening number for Fiddler On The Roof was called "We've Never Missed A Sabbath Yet." Hal Prince, who produced Fiddler, recalls that Robbins didn't like the song. He felt it didn't explain what Fiddler was about.

Another famous song from Fiddler On The Roof, "Sunrise, Sunset," started out somewhat differently than the version most people recognize.

"We did it [as] a mazurka," Harnick says, humming the original tune. "And, you know, through the years, it kinda got loosened up into more of a ballad."

Harnick says he hadn't heard most of the material on the Hidden Treasures in decades.

"But it was great fun," he says, "going over these songs and allowing myself to be proud of myself, by what I had done. You know?".

At age 90, the songwriter says he's spending a lot of time answering birthday cards and rewriting three shows he hopes to get produced in the future.