Accessibility links
In Maine, A Gay Candidate With An Uneven Record On LGBT Rights The state could elect the nation's first openly gay governor this fall. But Mike Michaud only recently came out, and some question whether he deserves the backing of Maine's largest gay rights group. 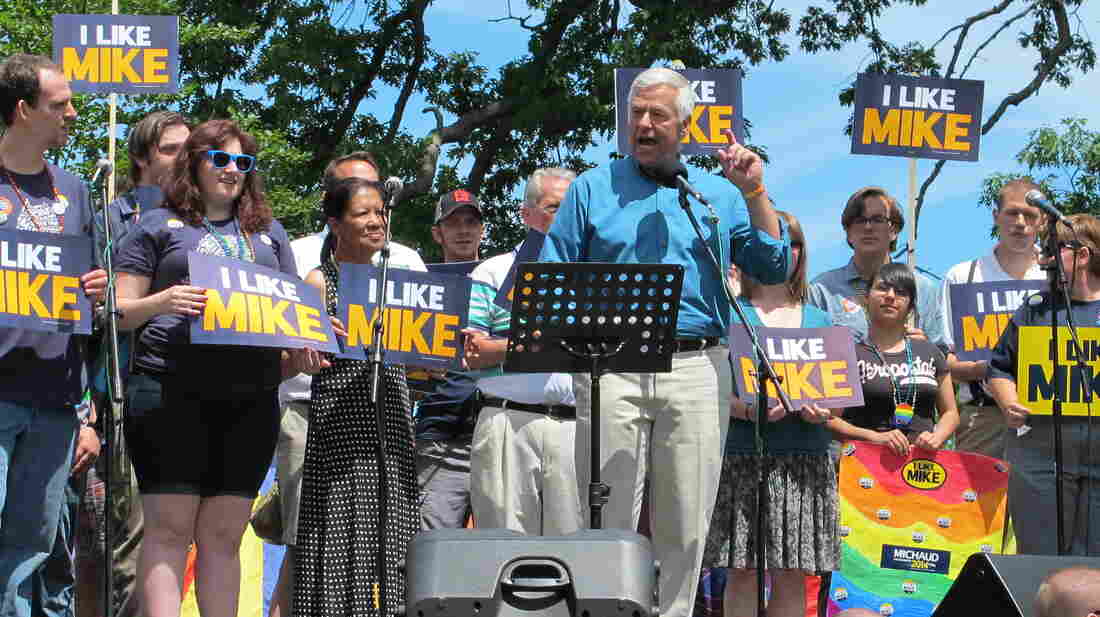 Democratic Rep. Mike Michaud speaks at the Pride Parade and Festival in Portland, Maine, on June 21. Michaud, who is openly gay, is running for governor with the backing of national LGBT groups. Susan Sharon/NPR hide caption 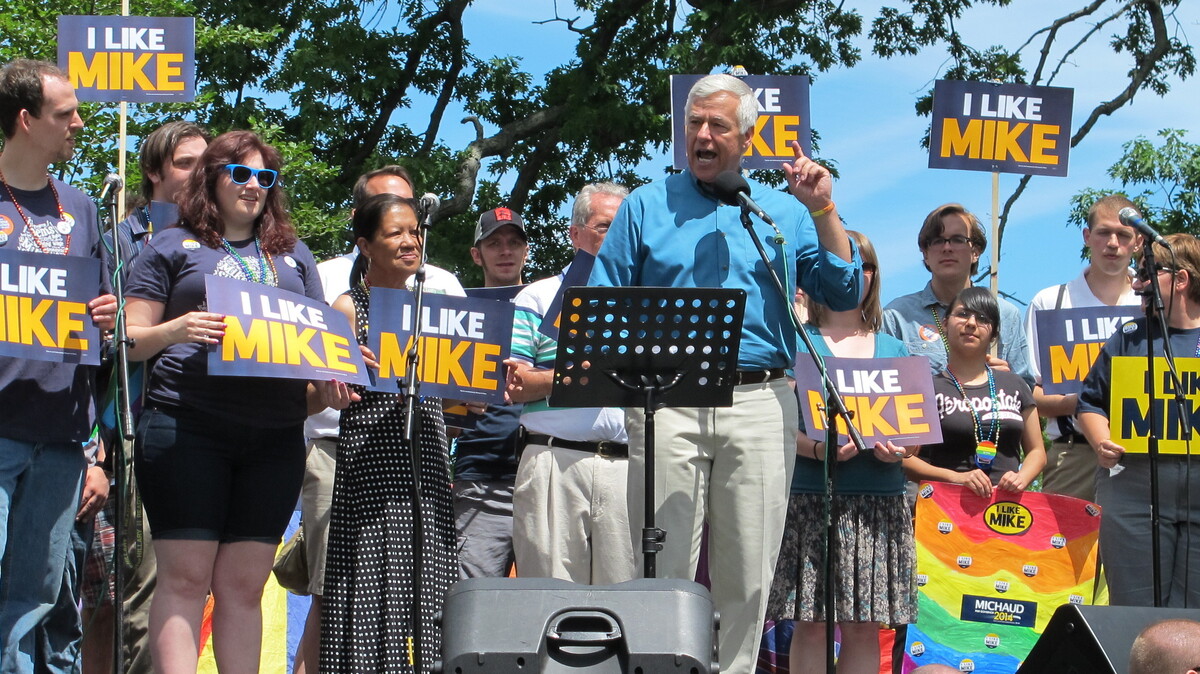 Democratic Rep. Mike Michaud speaks at the Pride Parade and Festival in Portland, Maine, on June 21. Michaud, who is openly gay, is running for governor with the backing of national LGBT groups.

Maine was among the first states to legalize same-sex marriage at the ballot box — and now, LGBT groups are hoping voters there will break new ground by electing the nation's first openly gay governor in November.

But Democratic candidate Mike Michaud only recently came out, and he hasn't always been a gay-rights supporter.

Responding to what he called a "whisper campaign" about his sexual orientation, the six-term congressman did something dramatic last November: He outed himself in a series of newspaper op-eds.

"Yes, I am gay, but you know, so what?" he told the Maine Public Broadcasting Network later that month. "You know, I am who I am." 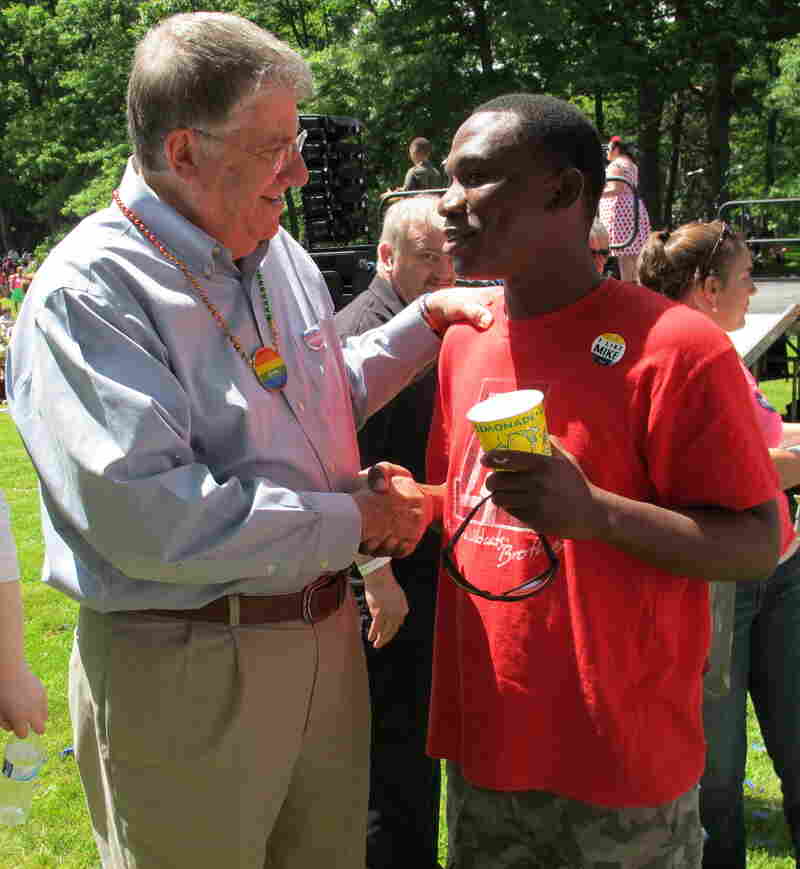 Eliot Cutler, who is running as an independent candidate for Maine governor, speaks to a man at the Pride Parade and Festival in Portland, Maine, on June 21. Susan Sharon/NPR hide caption 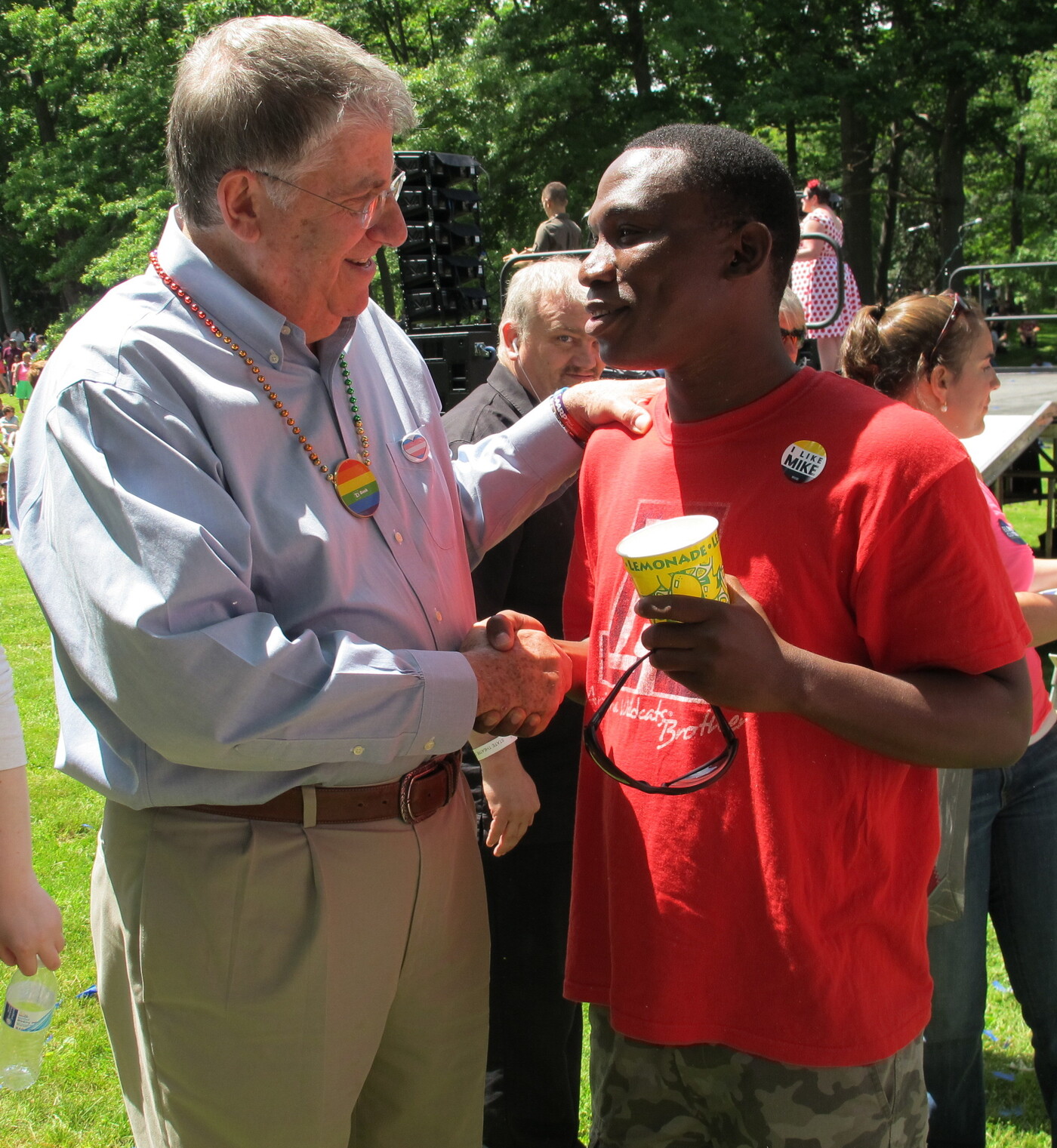 Eliot Cutler, who is running as an independent candidate for Maine governor, speaks to a man at the Pride Parade and Festival in Portland, Maine, on June 21.

That "who" is someone who punched a time clock at Great Northern Paper for nearly three decades; Michaud is one of only a few union-card-carrying members of Congress. Around northern Maine, he's known simply as "Mike."

Emery Deabay, president of the United Steelworkers Local 1188, said he doesn't think Michaud's coming out makes a difference to people who know him.

"Mike is Mike," Deabay said. "He went to Washington. You know he fought these unfair trade deals. He fought for veterans. That's what he does; everybody knows that."

Since going to Congress, Michaud has lined up with the left on social issues like abortion and gay rights. But his independent opponent, Eliot Cutler, says that was not the case when Michaud served for years in the Maine Legislature and voted against legislation to extend civil rights protections to gays and lesbians 19 times.

"You know, I don't care what your sexual preference is and I don't care whether you're out or not," Cutler said. "That was a moment, those were 19 moments, when principle was important and he voted no."

An attorney and entrepreneur, Cutler previously ran for governor in 2010 and supported same-sex marriage even before Maine voters legalized it in a 2012 statewide referendum. Over the past several decades, he and his wife have raised and spent thousands of dollars on LGBT causes.

It was Michaud, however, who was recently invited to serve as a grand marshal of the gay pride parade in Portland. And although Cutler also made an appearance at that event, he remains deeply hurt that Maine's largest gay-rights organization endorsed Michaud instead of him.

"It pained me ... because I had been committed to these issues for as long as I can remember in my life" Cutler said. "And to lose the endorsement to someone who hadn't, just because he is a) a Democrat and b) gay."

But Michaud says that Cutler, unlike himself, has never had to answer to constituents.

Even as a gay man, Michaud says, his own position on LGBT issues has evolved over time, the same way it has for many voters.

Polls show him locked in a tight race with Republican Gov. Paul LePage, a favorite of the Tea Party crowd, while Cutler trails a distant third. But any votes Cutler picks off could swing the election.

Mark Brewer, a political science professor at the University of Maine, says Michaud's coming out could help him with progressive voters in southern Maine. But in his conservative home district, Brewer says, it could hurt.

"It's a more rural population. It's an older population," Brewer said. "It's a less educated population and all of those characteristics tend to correlate with being less supportive of same-sex marriage and other equality issues for homosexuals."

National LGBT organizations are throwing their financial support behind Michaud, whom they see as a role model for their movement.

And that's something that will continue to gnaw at Cutler, who says he is proud of the fact that when it comes to matters of equality, he's never had to evolve.