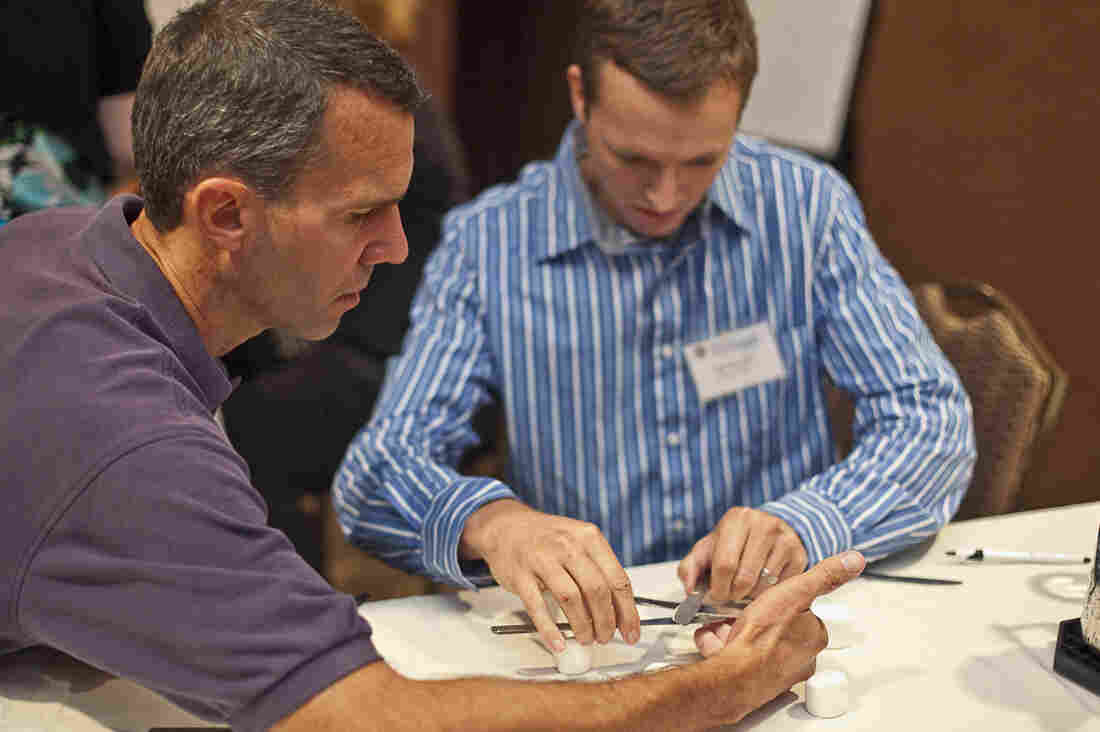 A team-building exercise involving marshmallows and knives is led by Create-Learning. This is relatively tame compared with some co-worker bonding activities. Clark Dever/Courtesy of Create-Learning hide caption 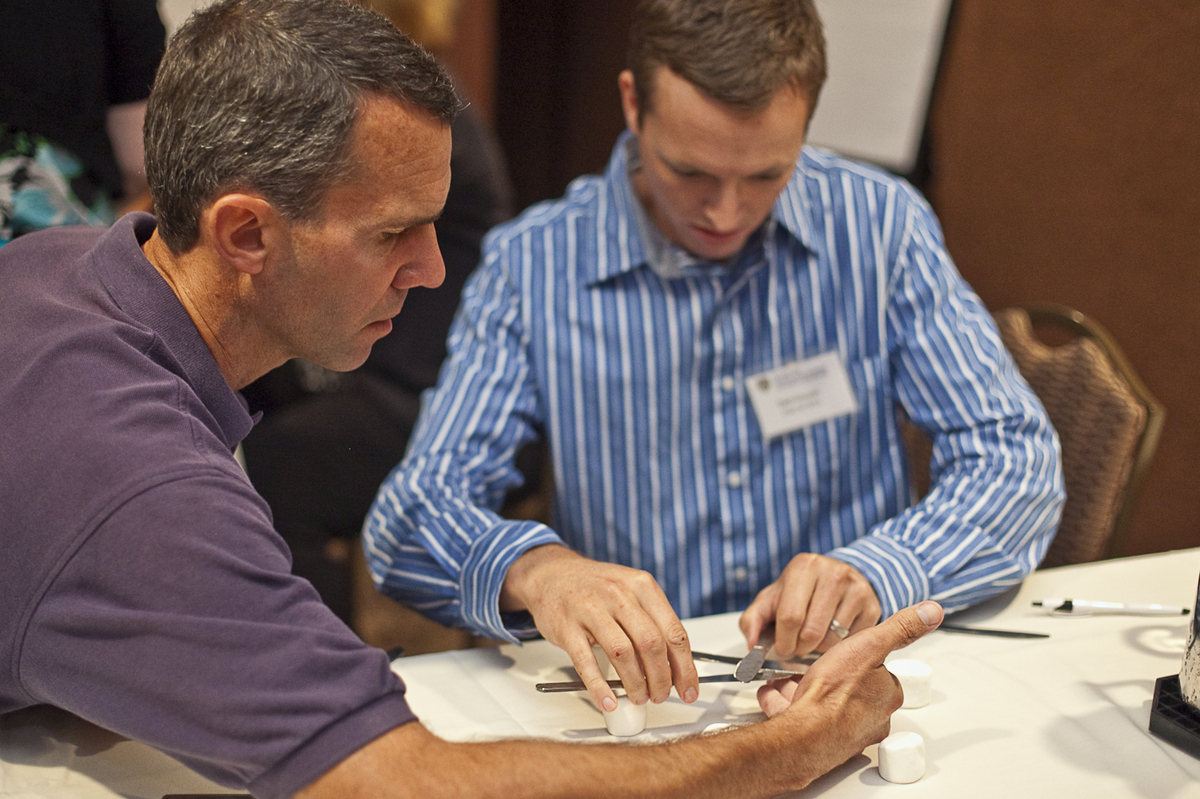 A team-building exercise involving marshmallows and knives is led by Create-Learning. This is relatively tame compared with some co-worker bonding activities.

Who can forget that game of Twister played in a skirt? Or the failed "trust fall" where the boss ends up on the ground?

Several years ago Ben Johnson worked at a health foods store in Iowa. He remembers store management stringing up a donkey piñata to pump up the workers.

"Pinned to its chest was a name tag for a rival store," Johnson says. "They explained to everyone that this was, in fact, an effigy and that we were going to work together to figuratively, literally destroy the competition."

In lieu of candy, the piñata was filled with dollar coins. An overzealous middle manager with a baseball bat was first up, and he obliterated it.

"So when this thing explodes, dozens of the dollar gold Sacagawea coins fly through the air everywhere," Johnson says. "Someone in the front row takes one in the face and goes down. They ricochet off the walls. And when the coins finally stop, I emerge from underneath the table, there's just a stunned silence."

The coins are like blood money, and no one picks them up. Johnson thinks of the whole fiasco as an omen since the store eventually fell to the competition.

Johnson is now a manager at a library, and he says there's an ironic twist: He's been tasked with organizing his own team-building event.

Around the world, there are thousands of teamwork facilitators. Michael Cardus is one of them. He founded Create-Learning in Buffalo, N.Y. He says the point of trying something new — something that requires cooperation — is to inspire different methods of problem solving.

" 'Hey, this is novel. This is different.' And then you can hopefully have them talk about what worked in that activity and how they can transfer it back to the workplace," Cardus says.

But sometimes it backfires.

Several years ago, things didn't go well for Peter Brooks when his former employer bused his division to a suburban Washington, D.C., field. They were divided into teams for a round of paintball.

"We were issued safety goggles and paintball guns, one of which immediately misfired. It hit a district manager in the crotch," Brooks says.

He remembers that the game quickly devolved into screaming, pleading and retaliatory rage — the paintballs left large welts.

"A lot of people pointed their guns right at their supervisors, me included," Brooks says. "I shot mine right in the middle of the back, and then when he spun around with revenge in his eyes, I surrendered."

The bus ride home, he says, was dead silent.

The Company Where Everyone Knows Everyone Else's Salary

"There are some CEOs who are weekend warrior types, and what they may do is compel the members of their team to participate in some really risky activities," she says.

Willy McGee's extreme experience happened last year during a retreat to Montauk, N.Y. The company he worked for was clearly in financial straits and full of dissent and discontent. But McGee says the CEO hoped to find salvation through group inspiration and seemed eager to appear cool and edgy to his young, 20-something staff.

"I think in order to win people back on his favor, he started going around and trying to hand out drugs," McGee says.

Psilocybin mushrooms, to be precise.

"So, at this point, about half the staff is arguing about who has it worse, at which job, and how we're getting screwed and what we're going to do next. And the other half started to eat psychedelic mushrooms," McGee says.

He remembers that after a midnight parade and a degree of mayhem, most of the employees settled down at the beach.

"We had this moment together on top of this lifeguard tower where we realized, 'Well, we're not going to save the business, but we could at least save the relationships here,' " McGee says.

The business closed in September, but McGee remains in touch with his former colleagues. Surviving trauma, he says, is its own kind of team-building.