Accessibility links
For Kids In Immigration Court, Legal Counsel Is Catch As Catch Can Advocacy groups have sued the federal government for not providing lawyers to children in deportation proceedings. Unlike criminal courts, these courts don't provide representation for defendants. 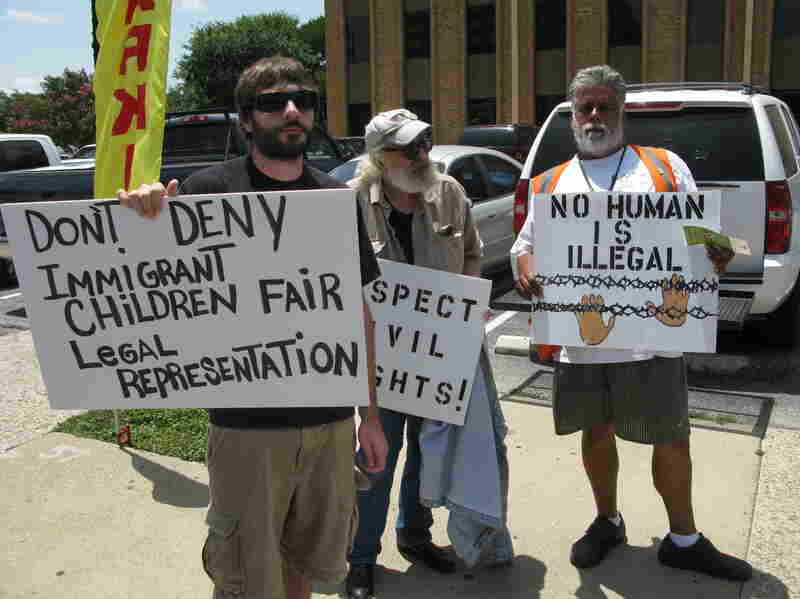 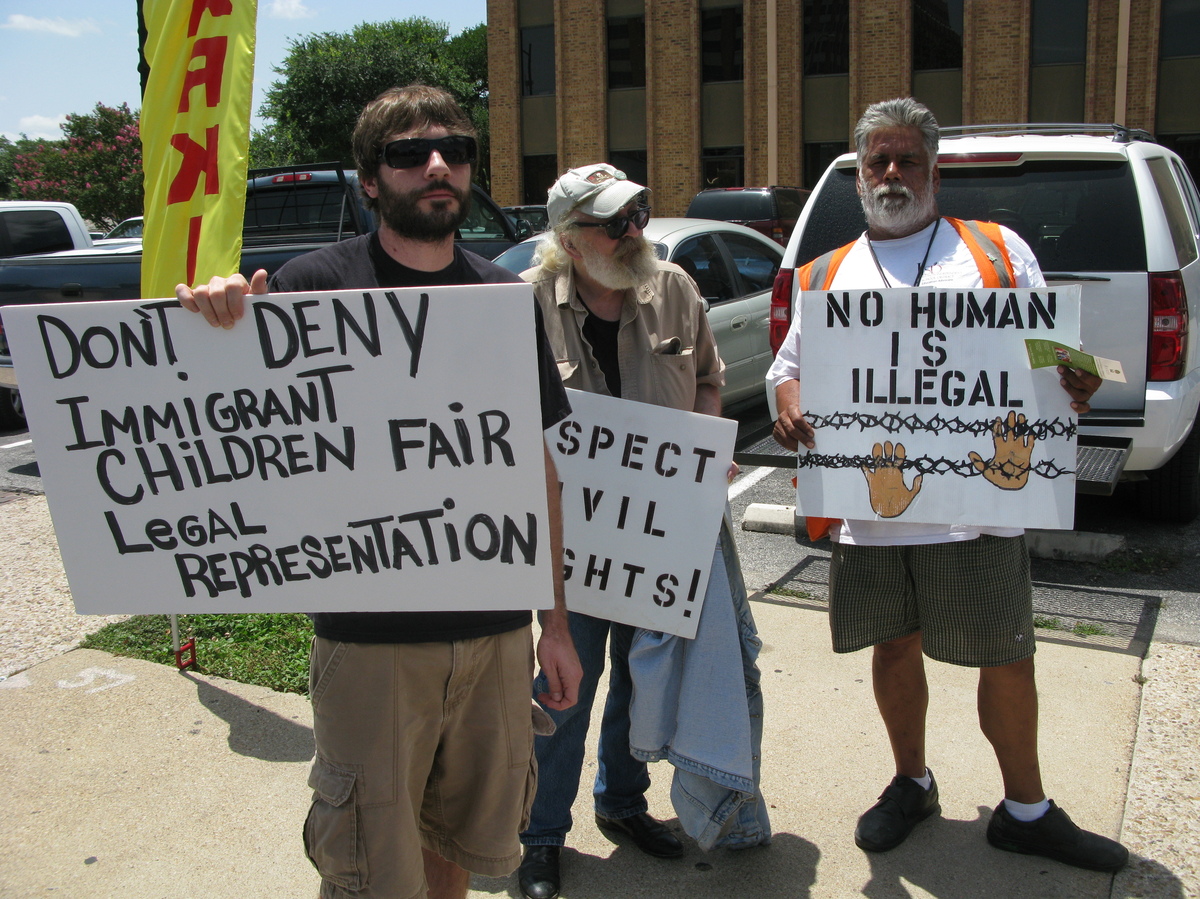 Protesters outside a San Antonio courthouse advocate for legal representation for immigrant children.

The American Civil Liberties Union and other groups sued the federal government Wednesday for its failure to provide legal representation to immigrant children in deportation proceedings.

The class-action lawsuit was filed on behalf of eight immigrants — ages 10 to 17 — who the ACLU says have not been able to find a lawyer. But the complaint applies to the tens of thousands of unaccompanied children who have illegally crossed the Southwest border in recent years and have ended up in U.S. immigration court.

In this country, immigration courts, unlike criminal courts, do not provide lawyers for immigrants who are fighting deportation. This leads to remarkable scenes like the one that unfolded in Courtroom No. 4 in San Antonio last week.

Judge Anibal D. Martinez sits at the bench in this small courtroom, presiding over the weekly juvenile immigration docket in San Antonio. At the table to his right sits a stern lawyer for the Department of Homeland Security, which seeks to remove children who cross the border illegally. And at the table on his left sits a pudgy, 9-year-old girl from Honduras named Berta Mejia Martinez.

Berta wears a sparkly butterfly shirt, and she's so small that her flip-flops don't touch the blue carpet. At the moment, Berta is representing herself in immigration court, though an adult family friend who speaks English accompanies her.

Martinez tells the girl in his booming judicial voice that he is postponing her hearing until late August to give her more time to get an attorney. She smiles bashfully.

When he adjourns her case, Berta trots happily out of the courtroom seemingly unaware that she is, in the language of the court, a deportable alien.

Lawyer Jonathan Ryan, who attends the juvenile docket week after week, says he's seen this scene play out before. Ryan runs RAICES, the Refugee and Immigrant Center for Education and Legal Services, in San Antonio.

Immigrant advocates generally agree that more than half of all unaccompanied children in deportation proceedings do not have legal counsel.

And with more than 50,000 newly arrived kids in the past nine months seeking green cards, the number is sure to balloon.

Having a lawyer makes a difference. Court records show that asylum seekers with an attorney are ordered deported at a much lower rate than those who go it alone through U.S. immigration law, which has been compared to IRS rules in its complexity.

Having an attorney speeds up the process because there are fewer delays.

"It makes the court process not just more efficient, but more fair when both parties are represented," says Ryan.

As an example, he mentions an incident that happened in Martinez's court.

"They may be ordered removed in their absence, and they'd become a fugitive from justice," Ryan continues.

In the current system, there is a mad scramble among immigration attorneys to offer pro bono help to as many youths in court as possible.

The government is not deaf to the problem.

The Executive Office of Immigration Review, the formal name for the immigration court system, funds several programs designed to help immigrant children find a lawyer. Among them: Justice AmeriCorps, the Legal Orientation Program, and the Recognition and Accreditation Program. A spokesperson for the office declined comment for this report.

But the fact remains that the search for legal counsel in juvenile cases is, essentially, catch as catch can. And that's why the ACLU filed its lawsuit against the immigration system.

"They're trying," says Ahilan Arulanantham, senior ACLU attorney, of the government's attempts to bring fairness to the courtroom. "But on the other hand, the government pays for a lawyer in every case to prosecute the child. Then they really should also be willing to spend the resources needed to represent children on the other side."

The hard reality is that the immigration court system is perennially underfunded. It just came off of a three-year hiring freeze and is trying to find judges to backfill 200 empty positions.

The Obama administration's recent request for emergency funds to handle the wave of immigrants on the Southwest border includes $45 million for 40 additional immigration judge teams and $15 million for direct legal representation to children.