Accessibility links
Congress' Latest Death Match Involves A Bank You've Never Heard Of The business lobby is pushing hard for the survival of the Export-Import Bank, which has supported U.S. exports for 80 years. Some House GOP leaders, though, think it's time to kill the bank. 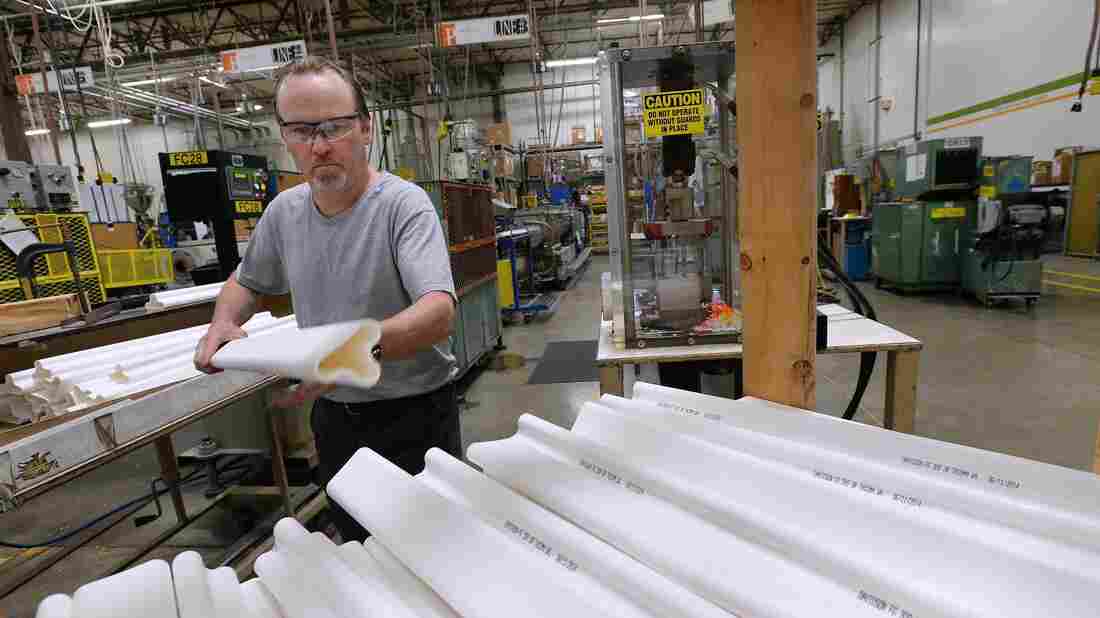 A worker stacks traffic safety poles at Pexco's manufacturing center in Fife, Wash. The small company ships products all over the world, with the help of federal insurance from the Export-Import Bank. Drew Perine/MCT/Landov hide caption 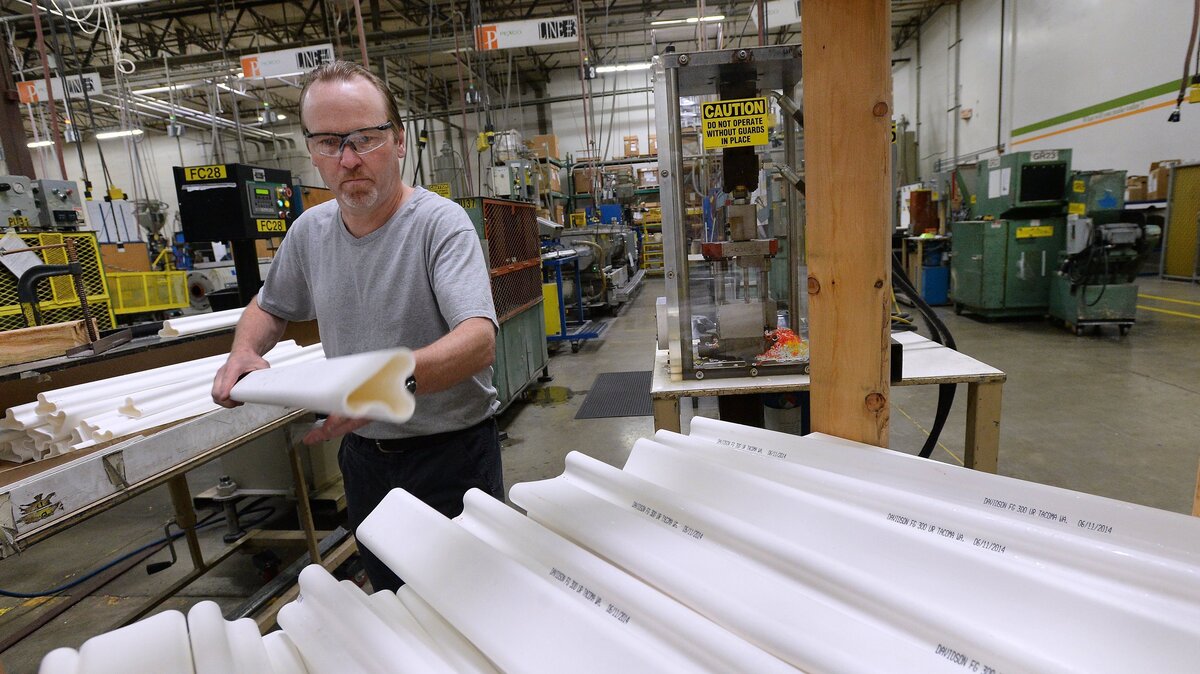 A worker stacks traffic safety poles at Pexco's manufacturing center in Fife, Wash. The small company ships products all over the world, with the help of federal insurance from the Export-Import Bank.

It sits in an imposing building just across Lafayette Square from the White House. Yet the Export-Import Bank, which has been offering credit to foreign purchasers of U.S. goods for 80 years, could start shutting down operations within a matter of weeks.

"There's about a 50-50 chance," says Dan Ikenson, who directs a trade policy center at the Cato Institute.

The bank has become a prime target of the Tea Party movement and other conservatives who view it as practicing the worst kind of government interference in the marketplace.

"There is probably no better poster child of the Washington insider economy and corporate welfare than the Export-Import Bank," Jeb Hensarling, the Texas Republican who is chairman of the House Financial Services Committee, said in a speech at the Heritage Foundation — itself among the groups pushing for the bank's demise.

With Hensarling and other top House Republican leaders ready to kill the bank, it may be difficult for the bank to get the votes it needs to stay in business.

Virginia Republican Eric Cantor, the recently ousted House majority leader, was a major backer of the bank. His successor, Kevin McCarthy of California, says it's time for the bank to go.

This has set up a confrontation between the Tea Party and the GOP's business backers. The U.S. Chamber of Commerce and the National Association of Manufacturers are putting on a full-court press, calling on small-business owners around the country to convince their members of Congress of the bank's continuing importance.

"The business community is pushing this very hard right now," says Christopher Wenk, senior director of international policy for the Chamber of Commerce. "What really matters is members of Congress hearing from their constituents."

What The Bank Does

Since 1934, the Export-Import Bank has been doling out loans and guarantees to foreign entities that want to buy American products. If a Russian car company wants to buy steel from the U.S., say, the bank might step in to help with credit when private lenders won't.

"Banks do not want to lend for Caterpillar to sell tractors to Nigeria," says Gary Hufbauer, a senior fellow at the Peterson Institute for International Economics, which supports the Ex-Im Bank, as it's sometimes called. "You don't have to Google very much about Nigeria to know how unstable that country is."

The Ex-Im Bank does a tiny amount of the lending involved in exporting U.S. goods — maybe 2 percent. But Hufbauer says it helps fill crucial gaps, aiding in sales of heavy equipment such as power turbines and MRI machines.

Such goods last a long time, and private banks are sometimes dubious they'll be paid back through the 30-year life of a tractor.

If the bank's boosters consider it an important tool for keeping U.S. companies competitive in the global marketplace, critics say it's an example of the government playing favorites in ways it shouldn't.

Helping foreign competitors buy U.S. goods at a discounted rate gives them an unfair advantage over U.S. companies that might use the same products or raw materials, Boudreaux says.

The example critics often site is Delta Air Lines, which competes with Air India on certain routes and is angry that Air India gets favorable terms through the Export-Import Bank when it buys Boeing aircraft.

The fact that Boeing itself accounts for an outsized share of Ex-Im lending is also seen by critics as an unwarranted subsidy. Boeing says Ex-Im help will support $10 billion worth of sales this year.

Supporters of the bank have one big advantage. They have been arranging news conferences all across the country with restaurant equipment-makers and medical office designers and other small companies whose owners can talk about specific numbers of workers they've hired thanks to help from the bank.

The idea that some companies worry that foreign competitors might be gaining a slight advantage through financing help is a bit more abstract.

The fact that the Export-Import Bank has been self-supporting since 2008 — taking in more through fees from borrowers than it costs to run — has also led most editorial writers to call for its continuation.

But opponents of the bank have an ace up their sleeve. Killing the bank isn't like trying to abolish the Affordable Care Act, say, or funding highway construction — decisions that would require all the political branches to agree and then take action. The bank's authorization will simply expire on Sept. 30, unless Congress takes an affirmative vote to keep it going.

It's not like its building would then be padlocked on Oct. 1. It would continue to service existing loans, without issuing any new ones. It would be like a single-agency shutdown, with a skeleton crew hanging around to oversee the bank's slow death.

The business lobby is pushing hard to prevent that. A Senate bill to keep the bank in business is expected to be introduced any day and should have enough support to pass.

A group of 41 House Republicans last month signed a letter calling for the bank's reauthorization. But many members of their caucus are bound to resist holding a vote to extend the bank, which would likely pass with largely Democratic support.

"I believe it is a defining issue for our party and our movement," Hensarling said in his Heritage speech.

And, if Congress has shown itself capable of anything lately, it's not voting on something.

"It's action through inaction," says Ikenson, the Cato scholar.