Accessibility links
Not My Job: Skier Mikaela Shiffrin Gets Quizzed On Downhill Cheese Races If you think downhill ski racing is dangerous, then you've never seen the Gloucestershire Cheese Rolling Races, in which competitors hurl their bodies down a steep hill, chasing a wheel of cheese. 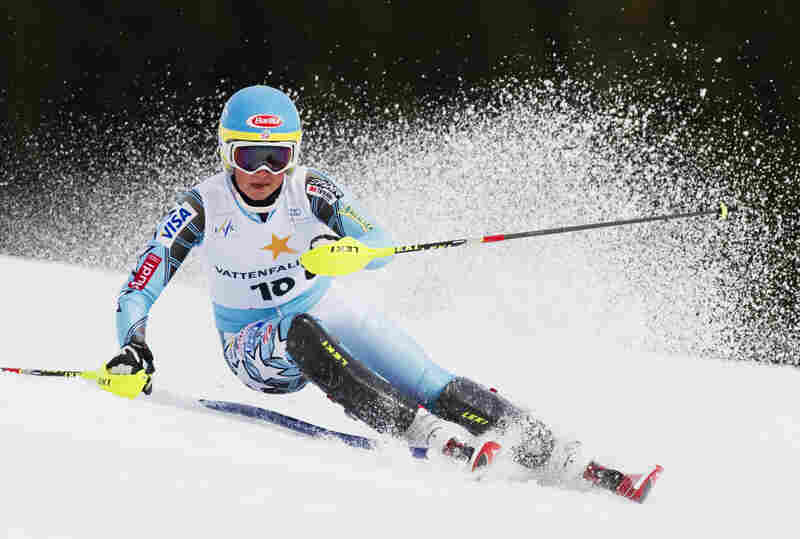 Wait Wait is at Colorado's Red Rocks Amphitheatre this week, and so we've invited Colorado native Mikaela Shiffrin to play Not My Job. Shiffrin grew up in Vail, and this year at the Sochi Olympics, she became the youngest person ever to win an Olympic medal in slalom.

We've invited Shiffrin to play a game called "It's the cheese! After it!" If you think downhill ski racing is dangerous, then you've never seen the Gloucestershire Cheese Rolling Races. For centuries, competitors have hurled their bodies down a frighteningly steep hill, chasing a wheel of cheese. Sure, one year 33 people had to go to the hospital with injuries, but the winner gets to keep the wheel of cheese. Beats a medal, right?

And now the game where we like to invite rising stars and show them what it's like to go in the other direction for a while.

SAGAL: Mikaela Shiffrin was born here in Colorado 19 years ago.

SAGAL: We like to think that she was born while her mother was skiing a black diamond run. She grew up in Vail, and at Sochi this year, became the young person ever to win an Olympic medal in slalom.

SAGAL: It's so great to have you.

SHIFFRIN: It's great to be here.

SAGAL: So you were born in Vail. It is like when dolphins are born and they immediately start swimming?

SHIFFRIN: ...And I just skied right down.

SAGAL: ...Waiting for you to come. But you must have grown up skiing - right? - like everybody did.

SHIFFRIN: I did grow up skiing. I started skiing when I was 2 years old.

BRIAN BABYLON: How big are those skis?

BABYLON: How big are those skis?

SHIFFRIN: Perfect. I never even thought of that. I have my American Girl doll and the horse and the whole thing, and I should have put her on skis.

SAGAL: It would've been awesome.

TOM BODETT: It would have been awesome.

SHIFFRIN: What was I thinking?

SAGAL: And how old were you when it was like, oh, she's good? You're good at this.

SHIFFRIN: You should have my mom on here or my dad.

SHIFFRIN: 'Cause when I was 3 years old, I thought I was very good at skiing.

SAGAL: I thought that, too, but I was really wrong.

SAGAL: It's all right. If somebody said...

SAGAL: Here she is. Campbell Soup presents Mikaela Shiffrin saying, to hell with you losers.

POUNDSTONE: Dream big, but keep a small dream, too.

SHIFFRIN: No, no. Dream big, but don't be upset if it doesn't happen.

SAGAL: I'm actually kind of serious because I assume growing up in Vail, everybody skis, right?

SHIFFRIN: I mean, it's an expensive sport, so you want to be, like, cautious about saying, everybody skis, because some people don't have the luxury. But I just - I fell in love with the sport when I started to ski gates. Once I was allowed to start training gates around 6 years old, then I really fell in love with it.

POUNDSTONE: But there was that dry period between 3 and 6.

POUNDSTONE: Mikaela, you know what I never understood? I thought in the old days, when I would watch the Olympics that they weren't supposed to hit the thingy.

SAGAL: Let me translate for Paula.

SAGAL: What she means is that now when you watch someone like yourself, you're actually running over the pole, the gate...

SAGAL: ...Knocking it over as you pass it.

SHIFFRIN: This is good terminology.

SAGAL: Thank you, but in the old days...

SAGAL: I'm trying to explain. But in the old days, it seems like you weren't allowed to touch it, or is that correct?

SHIFFRIN: Well, yeah. Well, see, in the old days, it was bamboo, and so it really hurt if you touched it.

SHIFFRIN: And people still tried, and they got bruises. And now they're plastic, and they have these - I don't know - it falls over when you hit it. But you still get bruises, so the whole point of the sport is not about hitting the gates. It's about skiing down as fast as possible, so...

SHIFFRIN: Because then you could ski around - well, I don't know.

SAGAL: Are you really?

SHIFFRIN: Well, it depends. Most of the time, I'm pretty confident because it's - you know, I've been ski racing for a while, so I'm confident. But every now and then, there's a moment where you're like, this is - I'm freezing; I'm wearing a spandex suit; so I'm pretty much naked; I have this ugly helmet on, and I'm, you know - I'm painting it to make it look pretty. But everybody knows helmets are not fashionable...

SAGAL: Wait a minute. Are you telling me you're up there, like, at the Olympics with literally the eyes of the world on you, and you're getting ready to ski for Olympic gold, and you're thinking to yourself, this helmet does not flatter me? That's what's going through your head?

POUNDSTONE: Is that what held you back ages 3 through 6?

POUNDSTONE: Those were the dark years. I sense that.

BILL KURTIS, BYLINE: It's The Cheese - After It.

SAGAL: So you might think that downhill ski racing is dangerous, then you have never seen the Gloucestershire Cheese-Rolling races.

SAGAL: For centuries, in Britain, competitors have hurled their bodies down a frighteningly steep hill - none of that snow stuff, mind you, to cushion the fall - chasing a wheel of cheese. Sure, one year, 33 people had to go to the hospital, but the winner gets to keep the wheel of cheese.

SAGAL: Beats some medal, doesn't it? We're going to ask you three questions about the great Gloucestershire cheese races. Get two right, you'll win our prize for one of our listeners - Carl Kasell's voice on their voicemail. Bill, who is Olympian Mikaela Shiffrin playing for?

SAGAL: All right, here is your first question, Mikaela. Every spring, men and women gather at the top of this very steep hill in Gloucestershire, and then they race to see who gets the cheese. According to local experts, the best strategy for winning the race is - what? - wait at the back of the pack for everyone to fall down the hill and hurt themselves, then slowly walk down the hill to win the race; B, get drunk first; or, C, lie down across the hill and just roll - the strategy being known as being the cheese.

SHIFFRIN: I'm going to do, B, get drunk first.

SAGAL: You're going to do B?

SHIFFRIN: Well, OK, here's the reasoning; C, you're rolling sideways down a hill. I mean, everybody did this as kids. You can't - you have no idea what's going on.

SHIFFRIN: You don't know which way is up or down, and you always somehow go sideways.

SHIFFRIN: And so you'd end up just rolling sideways across the hill, which isn't very good. And then there's always the one crazy person who's going to make it to the cheese, so you can just, you know, wait at the top.

SAGAL: Right. You're a true competitor.

SAGAL: You've parsed this out. OK, so you're going to go for B?

SAGAL: You are correct. It is get drunk first.

SAGAL: It is a very steep hill, really steep. And most people believe nobody entirely sober could hurl him or her self down it. Don't get too drunk, though, just drunk enough is the wisdom. That's good. You got one right. There a lot of injuries. Racers go flying. The videos, like I said, are horrifying. So last year, the local authorities tried to stop the event. They tried to stop it from happening by doing - what? - A, telling the 86-year-old woman who makes the cheeses that she would be liable for any injury; B, passing a law requiring all cheeses to be manufactured in a square shape; or, C, just bulldozing that hill flat.

SAGAL: A. You're confidently choosing A.

SAGAL: Yes, that's what they did.

SHIFFRIN: How could you make everybody agreed to make cheese in a block shape? It comes in the ovular wheel.

SHIFFRIN: ...In my dictionary.

SHIFFRIN: I'm in the age of technology and creating your own words.

SAGAL: You were right. Diane Smart, 86, has made the cheeses for the event for years. And police came to her house and warned her that if anybody was badly hurt, they'd hold her responsible. She made the cheese anyway.

SHIFFRIN: OK, so question for you. What was her response to that?

SAGAL: Her response to that cannot be said on public radio. Although, I'm sure it was said in a charming, "Downtown Abbey"-like British accent.

SAGAL: Last question. The winner this year, Josh Shepard, shocked organizers when he announced right after he won the cheese - what? - A, he didn't mean to compete in the race. He was going to watch it, but he tripped and rolled down the hill in front of everybody; B, he was a, quote, "lactose sexual" and intended to marry the cheese; or, C, actually he doesn't even really like cheese.

SAGAL: Confident. So now he has an eight-pound wheel of cheese he's not going to eat because, quote...

SAGAL: He doesn't really like cheese. Bill, how did Mikaela do in this composition?

KURTIS: Well, she's 19 years old. She's an Olympic champion. And now she is a champion on WAIT WAIT ...DON'T TELL ME.

SAGAL: Cannot keep this woman down.

SHIFFRIN: Anybody has questions about cheese...

SAGAL: You know, if you ever get bored with the whole international lead skiing thing, you could try this.

SAGAL: I have a feeling you'd be very good at it.

BABYLON: Or hosting a radio show.

SAGAL: I would so like to switch places with you for one day.

SHIFFRIN: I don't think you would.

BABYLON: Yeah, no. Peter in spandex? No way.

SHIFFRIN: That part would be good.

SAGAL: Mikaela Shiffrin. Give it up for her.

SAGAL: In just a minute, we eat our greens. It's our listener Limerick challenge. Call 1(888) WAITWAIT to join us on the air. Support for NPR comes from NPR stations and the Ford Foundation, working with visionaries on the frontlines of social change worldwide at fordfoundation.org. Subaru, featuring the all-new Subaru Legacy. It's not just a sedan; it's a Subaru. Learn more at subaru.com. And Angie's List, connecting consumers with user-reviewed contractors, an online marketplace and concierge support for home improvement services, angieslist.com. We'll be back in a minute with more of WAIT WAIT ...DON'T TELL ME from NPR.